A freediving fisher from the Indonesian island of Sulawesi attempts to flush a blue tang away from the coral and into his net to sell to an aquarium fish trader. Photo by Shannon Switzer Swanson

Small like its name, the rural village of Les sits between rugged volcanic mountains and the sea on the northern coast of Bali, Indonesia. Winding two-lane roads flanked by modest housing and open-air markets are busy with motorbikes and rusty pickup trucks. But the ocean is calm. Slipping a worn dive mask over his eyes, Made Partiana freedives beneath the surface with fishing nets in hand. Les fishers like Partiana stay busy. Their village is one of the island’s top suppliers for a multimillion-dollar industry: the saltwater aquarium fish trade.

Before picking up nets 20 years ago, Partiana and other fishers in Les caught aquarium fish with the same chemical that movie spies put in suicide capsules: cyanide. Fishers mix it with a solution in a spray bottle and use it to blanket the reef in poison. The neurotoxin stuns fish, rendering them a lethargic, easy catch for several minutes. It’s just long enough to collect shy and highly sought-after fish like the blue tang, the inspiration behind Finding Nemo’s Dory.

The easy harvesting that cyanide provides comes at a deadly price. As much as 90 percent of fish caught with cyanide die before they reach a retailer. And the poison can severely damage coral reefs by destroying coral polyps and other organisms essential to reef health. When fishers are properly trained to use nets correctly so that they do not break or dislodge coral, net catching is demonstrably less harmful to the reef and its inhabitants, says Shannon Switzer Swanson, a marine social ecologist and PhD candidate at Stanford University in California, who works with fishing communities in Southeast Asia and the Pacific Islands.

The global trade in saltwater aquarium fish took off in the Philippines in the 1970s and spread to nearby countries, quickly gaining popularity among fishers in Indonesia. Today the two nations produce around 80 percent of the world’s saltwater aquarium fish, generally supplying collectors in North America, Western Europe, and Asia. The largest buyer is the United States, which imports at least 10 million saltwater aquarium fish each year. If you’ve ever owned a saltwater fish, or seen one swimming in a pet shop tank, there’s a good chance it was caught by an Indonesian fisher like those in northern Bali who earn the equivalent of about US $100 a month.

This interactive graphic shows the global flow of marine aquarium fish from 2000 to 2011. The Philippines and Indonesia are the two biggest exporters; and Los Angeles in the United States receives the most fish (more than 6.3 million in 2009 alone). Reproduced from Aquariumtradedata.org with permission and assistance from Andrew Rhyne; original data from Rhyne, Tlusty, Holmberg, and Szczebak 2015

The United States prohibits fish caught with cyanide, and exporting countries across the Indo-Pacific—including Indonesia—ban cyanide fishing. But Gayatri Reksodihardjo-Lilley of the marine conservation nonprofit the Indonesian Nature Foundation (LINI) says the rules are rarely enforced. Despite efforts by conservationists and governments to help fishers rethink their practices, the use of cyanide remains widespread throughout the Indo-Pacific, and Indonesian fish caught with cyanide continue to end up in aquariums. Yet, for the past 20 years, Les fishers have chosen a better way.

The aquarium fish trade, and cyanide, first came to Les in 1982. At the time, many Indo-Pacific reefs were under siege from coral mining and dynamite fishing, but Les reefs were healthy. Fishers rushed to cash in on the new industry, and soon the impacts were obvious. Other damaging factors, including overfishing and coral bleaching events, contributed to the steady decline of local reefs during the 1980s and ’90s. Villagers say that by 1986, around 60 percent of the live coral was gone. By 2000, they estimate as little as 10 percent remained.

That same year, the now-inactive Indonesian marine conservation nonprofit Yayasan Bahtera Nusantara (YBN) selected Les for an experiment. Representatives of YBN disguised themselves as fish buyers and approached Les fishers. They requested an order, but with a caveat: the fish had to be caught sustainably without chemicals.

Though fishers were anxious about dwindling reef fish populations and the future of their livelihood, they didn’t know how to meet YBN’s demands. The nonprofit offered to teach fishers techniques for catching ornamental fish using nets, sparking change that has endured for two decades.

The conservationists came clean about their deception after a couple of months, and Partiana was among the Les fishers who were quick to forgive them. His willingness to learn the sustainable net-fishing practice was partly motivated by fear, he says: he worried about declining fish resources and was scared of police enforcing laws against cyanide use at sea. Others were more stuck in the old ways. Yet, over the next few years, the community noticed reefs rebounding. And the fishers who had resisted giving up cyanide realized that their neighbors were successfully making a living with nets. Some respected fishers became advocates for net fishing, swaying skeptics with the promise of a long-term fish supply, new skills, and the opportunity to feel pride in their work. By 2003, most Les fishers had abandoned cyanide. 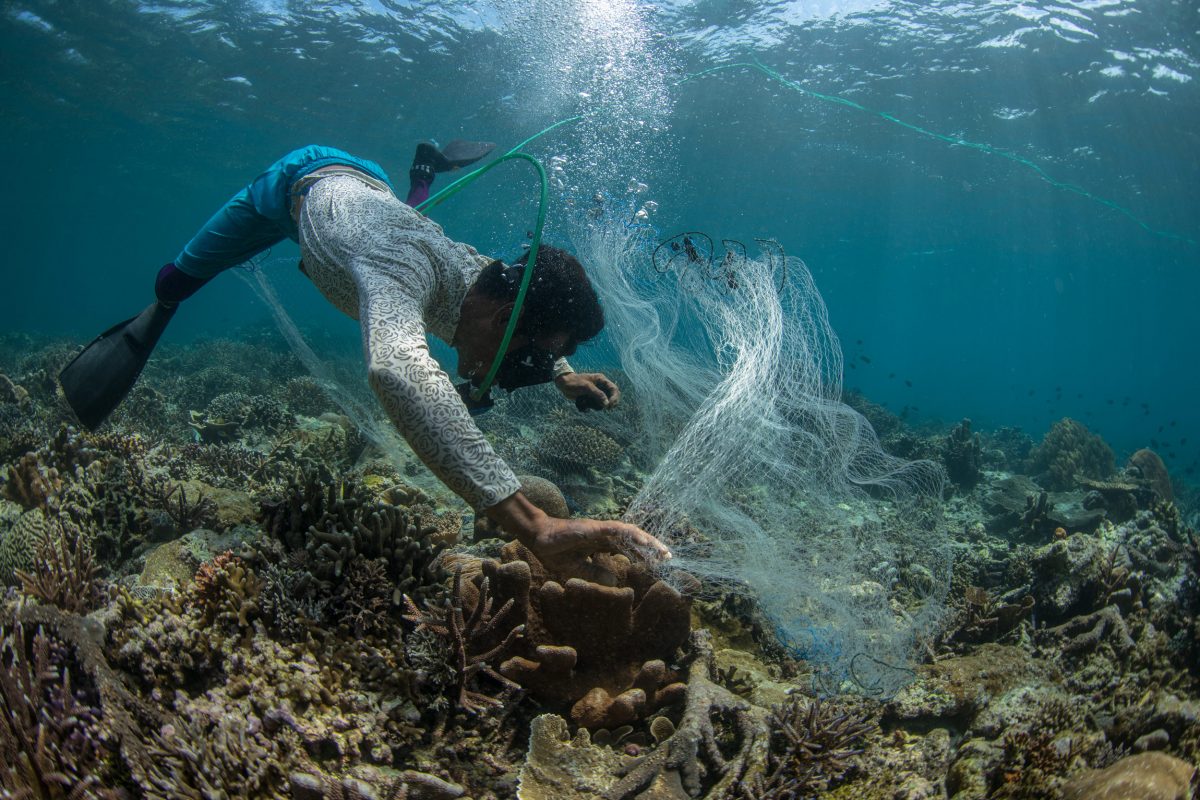 Catching aquarium fish with nets can be more difficult and less fruitful than catching them with chemicals—particularly if the fisher lacks training with nets—says researcher Shannon Switzer Swanson. If fishers lack strong personal motivation or external support, they risk reverting back to using substances like cyanide, she adds. Photo by Shannon Switzer Swanson

“Seeing the change, seeing the reefs come back, seeing the fish populations increase … just having evidence that these actions are successful sustains these methods,” says Swanson, who visited Les in 2016 and met with LINI for Reef to Aquarium, a research and conservation project funded by National Geographic that sheds light on the global marine aquarium fish trade.

Reksodihardjo-Lilley, who has been involved in conservation efforts in Les since 2003, founded LINI in 2008 to support sustainable fishing efforts and conserve reef habitats. LINI’s model encourages the community to set the pace and make the rules. So, Reksodihardjo-Lilley’s first course of action was to ask Les villagers where the organization should focus its efforts. The response was simple: they wanted to correct the past by restoring local reefs damaged by harmful fishing practices.

Previous nonprofits had worked on reef restorations in Les that involved growing coral and transplanting it—efforts that proved too costly and labor-intensive. LINI instead decided to implement artificial reefs, providing hard surfaces that coral could naturally attach to. With the community’s help, LINI installed several cement domes on the seafloor, each one roughly a meter high, that provide refuges for ornamental fish and alternative spots for collecting them, effectively removing pressure from natural reefs. 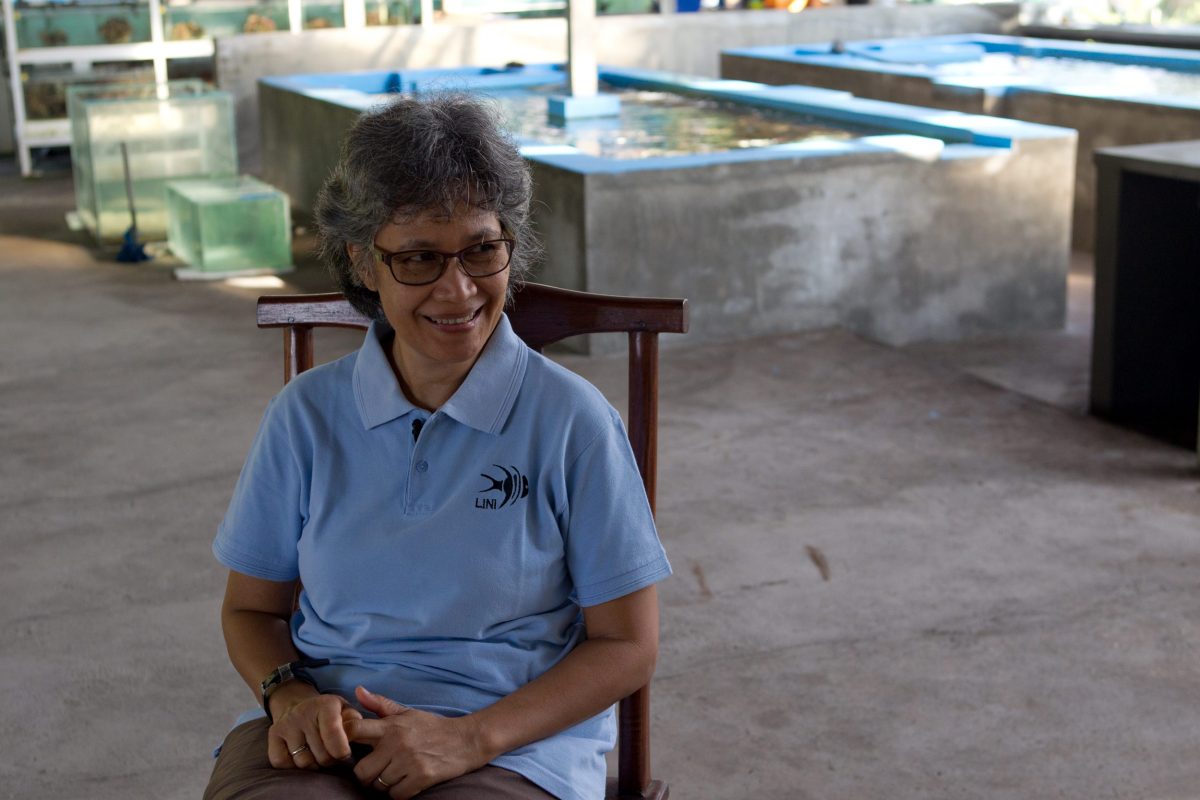 Gayatri Reksodihardjo-Lilley, director of the Indonesian Nature Foundation, at an aquaculture facility in Les, Indonesia. Photo by Shannon Switzer Swanson

By 2011, live coral cover had increased at least 35 percent since its low point in the early 2000s. It continues to do well, despite recent bleaching events, Reksodihardjo-Lilley says. In 2015, the village further diversified with a land-based aquaculture facility that breeds three species of popular clownfish and raises blue tang from juveniles. It’s mostly wives and daughters of village fishers who operate the facility—women who otherwise have few local opportunities for employment, she adds.

“If you can help the community learn new skills from scratch, it’s easier for them to teach others,” Reksodihardjo-Lilley says. “You don’t need big money. Just empower the community to help themselves.”

Buoyed by success in Les and other coastal communities in northern Bali, LINI has facilitated conservation efforts elsewhere in Indonesia. One of its greatest successes outside of Bali is its involvement beginning in 2010 in a national effort to restore the Banggai cardinalfish, a coral reef species from the Banggai Archipelago with long, flowing fins and vertical black stripes that’s targeted by the aquarium trade and is on the International Union for Conservation of Nature’s Red List of Threatened Species. LINI invited Banggai fishers to Les for training in aquaculture and then helped them secure a grant for a breeding facility in their home village. With LINI’s guidance, the fishers now artificially breed the cardinalfish and monitor wild populations. 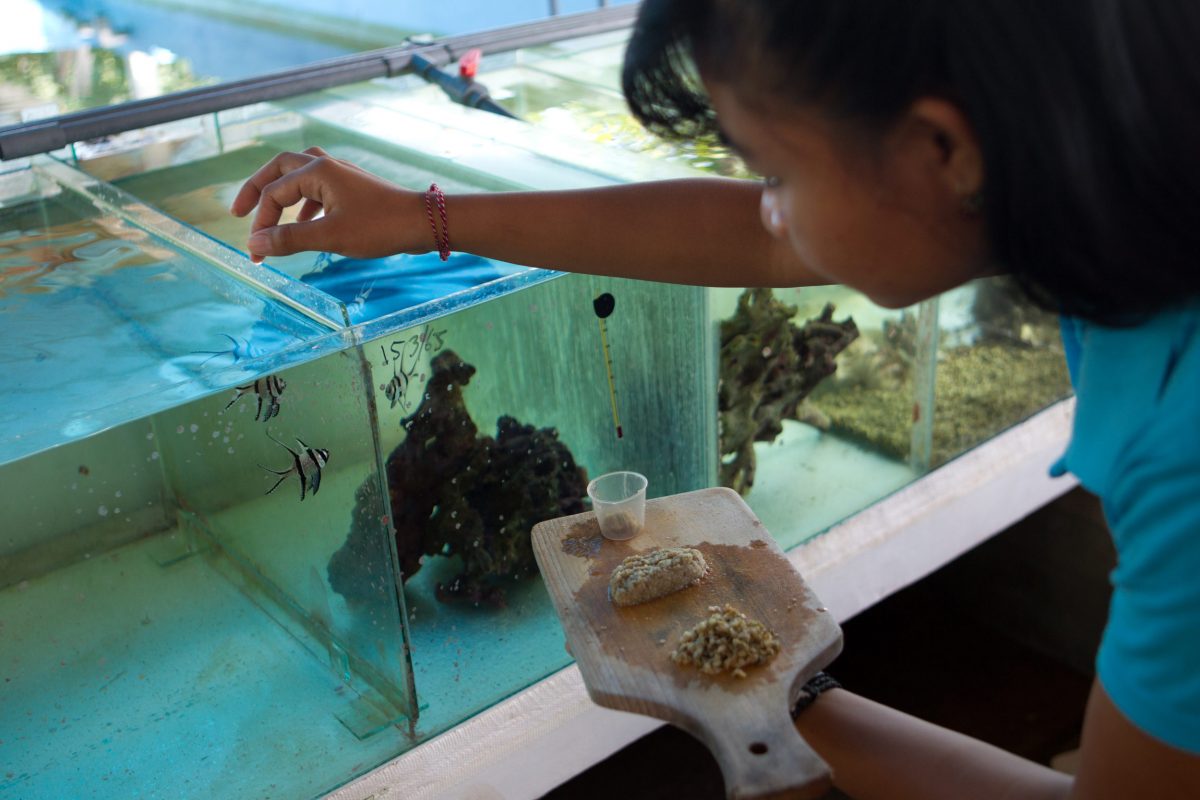 Global conservation projects too often aim to replicate success, Swanson says, which isn’t always productive because context can change from place to place. It’s important, she explains, for conservation organizations to identify a community’s unique needs, which may be economic or cultural, and shape goals for conserving vulnerable animals accordingly. In Les, she encountered an example of what can happen when communities are engaged in practical marine conservation action that’s uniquely crafted for the people as well as the ecosystems they inhabit.

Through collective action, Partiana and fellow Les villagers brought their reef fish back from the brink. Today, ornamental fishers are respected in the village, which wasn’t always the case, says Partiana, who has worked with LINI since 2006 and trained over 200 fellow collectors in northern Bali to use nets instead of cyanide and to target species so that overfishing is minimized.

Other threats to Les’s coral reefs persist: pollution, coastal development, and climate change. But now the village is full of guardians. Whatever comes next, they are prepared to face it with the health of their reefs in mind.