The northern bobwhite quail was once common throughout the Chesapeake Bay area of the eastern United States. Habitat loss, largely due to agriculture, has reduced its prime inland habitat in the region. Photo by Joel Sartore/Minden Pictures

Dan Small parks his orange truck in the shade of a cedar tree and sets off on foot down a dirt lane. Native grasses, humming with insects, stretch for more than 93 hectares under a radiant summer sky. From somewhere in the waist-high grass, a small game bird lets out a whistle: Bob-WHITE!

The northern bobwhite quail’s clear call is a sound Small, a field ecologist, is always thrilled to hear. It’s been decades since this once-common bird filled the air with its song and scurried in coveys across the fields and yards of Maryland’s Eastern Shore. Small is the coordinator of the Natural Lands Project at Washington College’s Center for Environment and Society. The college, just a few kilometers down the road, partially owns this farm. Here, the grasslands provide food and cover for the imperiled species that’s slightly larger than a robin. Small is the engineer of a local push to save two treasures that have suffered from a rise in intensive industrial agriculture over the past half-century: the northern bobwhite and the Chesapeake Bay.

It turns out that what’s good for the social, dark-eyed quail is also good for the bay, a massive estuary that stretches for roughly 320 kilometers between Maryland and Virginia. The Natural Lands Project has teamed up with local farmers and landowners to create habitat for the quail by turning hundreds of hectares of marginal croplands into perennial native grasslands. The grasses offer cover for quail as they scamper across the ground, foraging for food; wildflowers attract the insects the birds eat. The vegetation also grips the soil, soaks up nutrients coming off the agricultural fields, and provides softer, more natural shorelines than concrete or riprap. By preventing erosion, the grasses keep agricultural runoff—sediment, nitrogen, and phosphorus—from entering the Chesapeake Bay.

The fields where Small has come today are the model. After 20 years of careful management and experimentation with different combinations of grasses and wildflowers, the River and Field Campus, as this farm is known, is now home to an estimated 450 quail, believed to be the largest population in Maryland and a 39 percent increase from two decades ago. 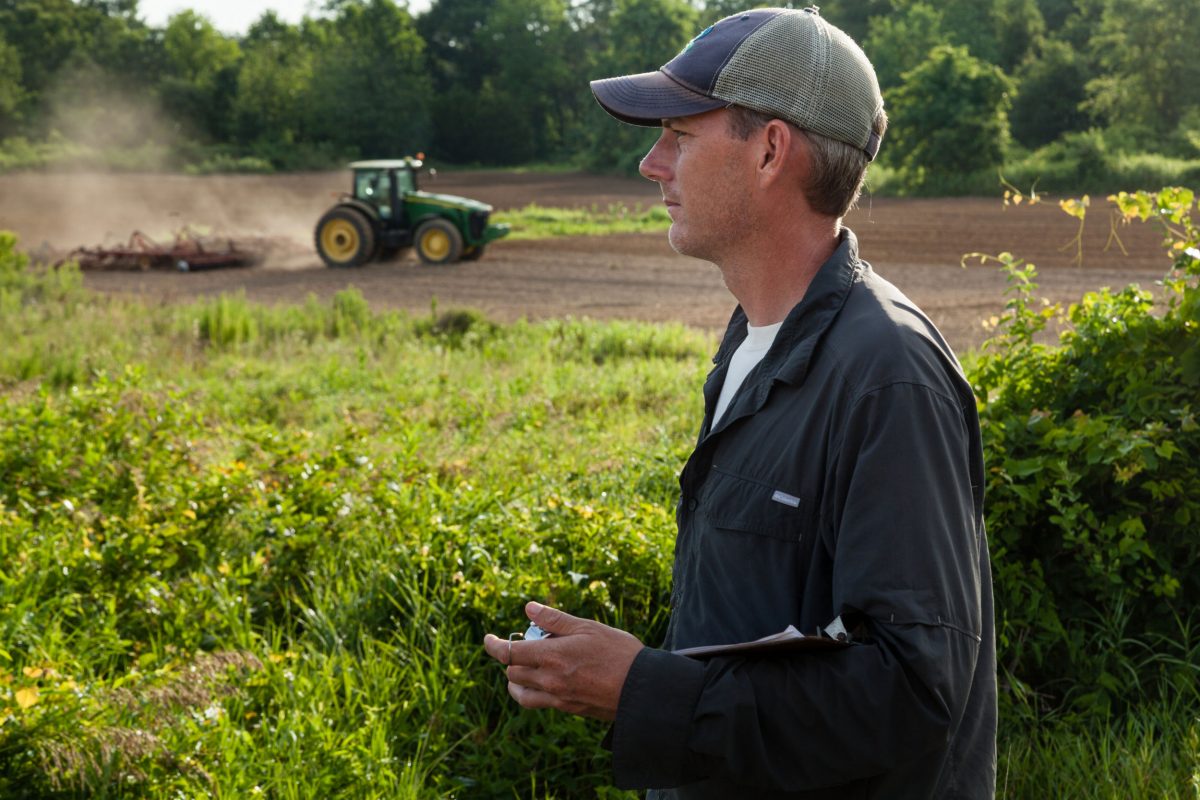 Dan Small, a field ecologist and coordinator of the Natural Lands Project at Washington College’s Center for Environment and Society in Maryland, surveys a farm, listening for the call of the northern bobwhite quail. Photo by Will Parson/Chesapeake Bay Program

Quail populations across the Eastern Shore aren’t what they could be, Small says. Using the River and Field Campus’s success as an example, he looks for landowners who’d be willing to plant quail-friendly native grasses on their properties. River and Field Campus’s fields have the same crops and same predators as surrounding properties, he says. “The only difference between our farm and other farms is that we have habitat.”

The northern bobwhite quail once lived across much of the eastern United States. But its population plummeted by 85 percent from 1966 to 2014 because of habitat loss. In this part of the Chesapeake region, changes to farming practices have dramatically altered the quail’s habitat. After the Second World War, farm fields got bigger and croplands soon stretched right up to the edge of creeks, rivers, and roads. Most of the closely spaced shrubs and small trees that used to mark boundaries between fields disappeared. These hedgerows sheltered quail; without them, the quail grew scarce.

The Chesapeake Bay’s decline tracks closely with these changes. Sediment loosened from the land through farming rushes into waterways during heavy rains and once in the bay smothers underwater grasses. In high concentrations, phosphorus and nitrogen from manure and fertilizers can deplete oxygen and create dead zones that suffocate aquatic life. Roughly a quarter of the 165,760-square-kilometer Chesapeake watershed—which drains parts of six states and the entire District of Columbia—is agricultural. Yet farms account for 58 percent of the sediment that runs into the bay, 58 percent of the phosphorus, and 42 percent of the nitrogen.

So how does the program work? Small is a familiar face in this close-knit community; neighbors talk. He also finds landowners by distributing flyers and speaking with reporters at local newspapers. At the outset, Small asks landowners to commit to taking a parcel of land out of commission for 10 years, for which they receive a one-time payment of US $1,112 per hectare. Small and the landowners look at maps, walk or drive around the farms, and settle on which and how many hectares to convert. When it’s time to get the land ready, Small’s team of contractors usually plows, mows, and sprays herbicide to clear out existing vegetation. Occasionally, a landowner will do the plowing and mowing if they have the equipment and time.

Then it’s time to plant the seeds. Small uses a mix of grasses—little bluestem, broomsedge bluestem, Virginia wildrye—and wildflowers on most properties. But he’s constantly monitoring their growth to avoid wasting money on seeds that don’t germinate or are too tasty for deer. Maintenance is important, and Small stays in touch with landowners as the seasons progress to make sure spring mowing and controlled burns—periodic, intentionally set fires that manage the growth of vegetation—happen at the right times. He visits the properties regularly to check on the growth and to conduct bird surveys for quail and other species such as grasshopper sparrows, field sparrows, and dickcissels.

The Natural Lands Project’s efforts to bring back quail habitat entails just the sort of shift in land management that could improve the bay’s health, too, says Dana Reiss, senior program director at the Chesapeake and Coastal Service in the Maryland Department of Natural Resources. So when Washington College applied to the state in 2015 for a three-year, $700,000 water quality grant to create habitat for a land bird, the idea wasn’t far-fetched, she says.

“When you start talking about water quality, some people’s eyes glaze over,” Reiss says. Many farmers on the Eastern Shore are accustomed to conservation messages framed entirely around what happens in the water: the effect of agricultural runoff on submerged aquatic vegetation, crabs, and oysters, she says. By focusing instead on a beloved land bird, Small and his colleagues gave water quality a familiar face.

Small got the grant for three years of work in two counties. In the end, he helped convert 150 hectares of grassland buffers—softened edges around croplands—and 14 hectares of wetlands. Small and his colleagues have so far signed up 36 landowners in three counties. Reiss says the immediate impact on the bay is huge. As long as the grassland buffers are in place and functioning as they’re meant to, each year they reduce nutrient runoff by 952 kilograms of nitrogen, 67 kilograms of phosphorus, and 50 tonnes of sediment.

The Maryland grant is now complete, but the US National Fish and Wildlife Foundation has awarded Washington College a three-year, $500,000 grant to continue the program and create roughly 121 more hectares of grasslands and some wetlands. Today, Small is checking a property where a landowner converted six hectares from soybeans to grasslands in 2018. On the way, we pass an old cemetery with sagging gravestones before arriving at one of Maryland’s oldest organic farms. This is the second growing season and the fields are now sprouting goldenrod, black-eyed Susan, oxeye sunflower, and partridge pea.

It’s Small’s first visit here since last fall. He’s not pleased with the sweetgum saplings poking up amid the native plants and reaches down to pull them up by their roots. Still, he deems it a success. “If I were a quail, I’d be psyched,” he says.

Next stop is a farm on the banks of the Chester River, a major waterway that flows into the Chesapeake. The landowner agreed to put in a 30-meter buffer across six hectares between the fields and the wetlands along the riverbank. Small explains that the croplands once went right up to the edge of the marsh, but now three kinds of native grasses and about a dozen varieties of wildflowers grow alongside the farm’s corn and soybeans. 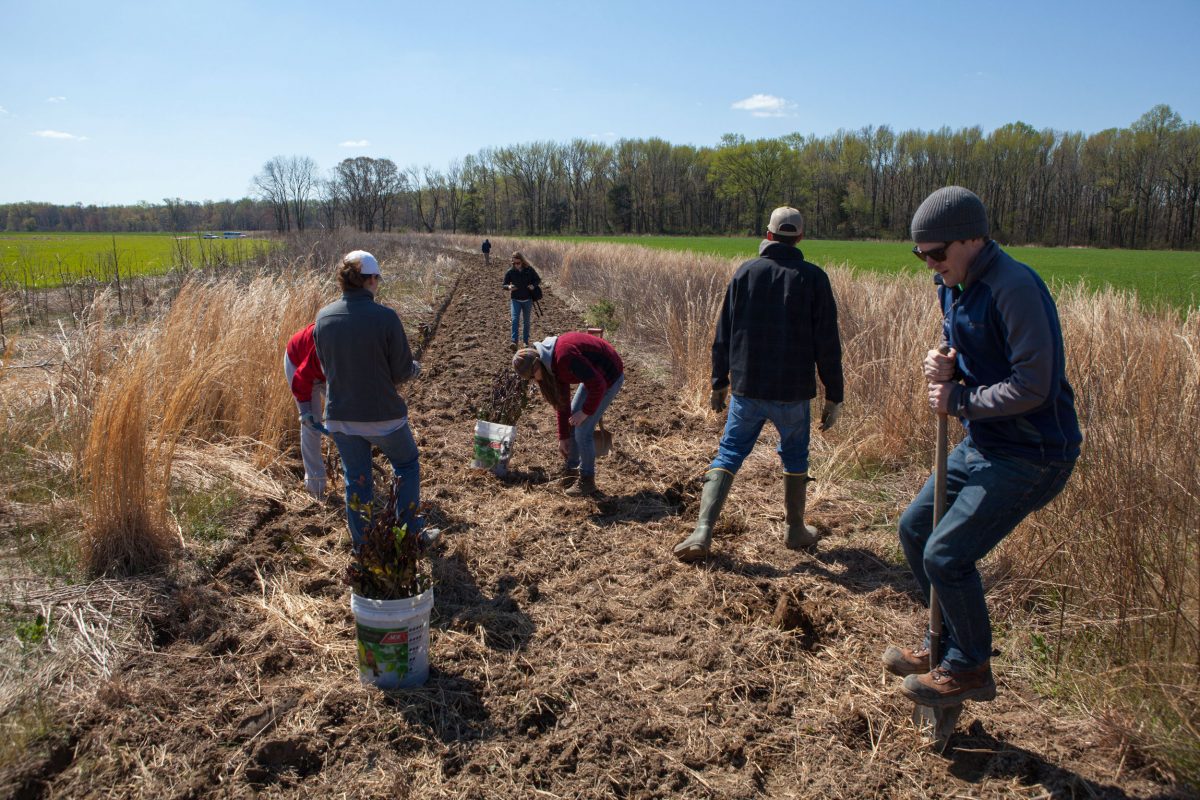 Dan Small and a team plant bayberries in a strip between two farm fields. When the plants mature, they will provide shelter for northern bobwhite quail. Photo by Will Parson/ Chesapeake Bay Program

Unlike the previous farm, where the owners had recently told him with excitement that they’d seen and heard quail, Small hasn’t detected any of the birds on this property yet. But he’s not worried. He doesn’t expect the birds to arrive on these farms overnight. “It is a long-term goal,” he says.

Yet the immediate benefits are considerable, especially for the Chesapeake, Reiss says. The bay’s pollution problem is very difficult to address once the pollutants are already in the water. The changes need to occur on land, she says. Reiss loves the idea of a charismatic bird enticing landowners to shift their thinking on croplands. “This could and should be a template for any other watershed with agricultural land looking to clean up its water,” she says.

Small’s last stop is another nearby organic farm. Rolling fields overlook an inlet that glints blue in the sun. Small calls this place “a little hotbed of habitat restoration.” At nearly 23 hectares, it’s also the anchor for all the neighboring habitat creation projects. Where nonnative hay grasses once grew, butterfly weeds now dot the fields with orange, along with Maximilian sunflowers and slender white tubes of foxglove penstemon.

Bob Ingersoll’s family has been on this land for more than a century. He and his three brothers invested the payment they received to join the project and are on track to bring in slightly more income than they would have received from renting the property to a hay farmer, as they’d done in previous years.

For Ingersoll, who has been involved with the project since its inception, the quail is emblematic of a quieter time. He remembers seeing coveys of quail on the farm decades ago. He also remembers when the Chester River’s waters were clear and teeming with healthy aquatic grasses. “It’s not just about the quail,” Ingersoll says. “It’s being a good steward of the land.”

No quail have ventured onto Ingersoll’s farm yet. For now, it’s songbirds and sunflowers. Yet Small casts an approving glance over the property anyway. “Plant it and wait,” he says, as he drives away from the fields and into the shade of the woods.