As the sun creeps above the Kogelberg mountain range, subsistence fisher Nicholas Taylor and four other men expertly maneuver the five-meter Clementine off the boat trailer and into the water. Soon, they’re chugging across the calm waters of the Atlantic as the town of Kleinmond on South Africa’s southwestern coast recedes into the distance. When they reach the Betty’s Bay Marine Protected Area (MPA) an hour later, they get to work. But rather than dropping lobster nets as they would have in the past, today they’re lowering baited remote underwater video stations (BRUVs).

The fishers are a vital component in a research project seeking to establish the relative abundance of fish and west coast rock lobster (Cape rock lobster) stocks within the MPA. While gathering this baseline data would normally be done before declaring a reserve, many of South Africa’s marine reserves were established without clear management objectives or ecological information. The Betty’s Bay MPA, for instance, started in 1973 as the H. F. Verwoerd Marine Reserve, named after the apartheid-era prime minister who had a holiday house nearby. It had the added disadvantage of an “unfortunate link with a politician” says Pierre de Villiers, senior manager for marine and coasts operations at CapeNature, “which resulted in poor support for the MPA.” Fishers frequently disregarded the boundaries of the MPA and fished as they always had, setting up a conflict between fishers and authorities that persists to this day. The lack of data—and resources and budget to remedy this—made it hard to justify the prohibition of boat-based fishing and any form of shellfish collection.

To fill these critical gaps in information, scientists from CapeNature, the provincial body in charge of managing the MPA, and three NGOs—the World Wide Fund for Nature South Africa (WWF-SA), Moving Sushi, and the South African Shark Conservancy (SASC)—paid 12 fishers from the Kogelberg region to deploy BRUVs inside and adjacent to the MPA. They also paid two local youths a stipend to review the video footage and identify the species caught on candid camera, and then to help the researchers quantify relative abundance in particular sites. The researchers’ goals were to get the data in order to inform management strategies, but also to bring the fishers onside, making them part of the research team so they might better understand how MPAs can ultimately support fish stocks in the region. The trust-building process worked both ways, adds de Villiers, as it was “about the government believing the fishers could be trusted.”

“It’s widely thought that MPAs do nothing for the community,” says Mike Markovina of Moving Sushi who assisted in the development, planning, and initial implementation of the project. “But now the locals were actually earning money from it.” The team not only paid the fishers and youths, but also rented the Clementine from a local skipper, Desmond Maka, who also welded the rigs that hold the video cameras.

Enlisting locals also made logistical and economic sense for the researchers. “All fishers know how to drive a boat,” says Markovina, explaining that the savings on charter fees allowed project funds to stay in the community. And, of course, fishers brought a depth of local knowledge—navigation skills and where to find fish, for instance—to the team. Understanding how and where to lay a rock lobster net on the ocean floor translated well to deploying the BRUVs. The fishers were extremely reliable and professional research partners, says Markovina. 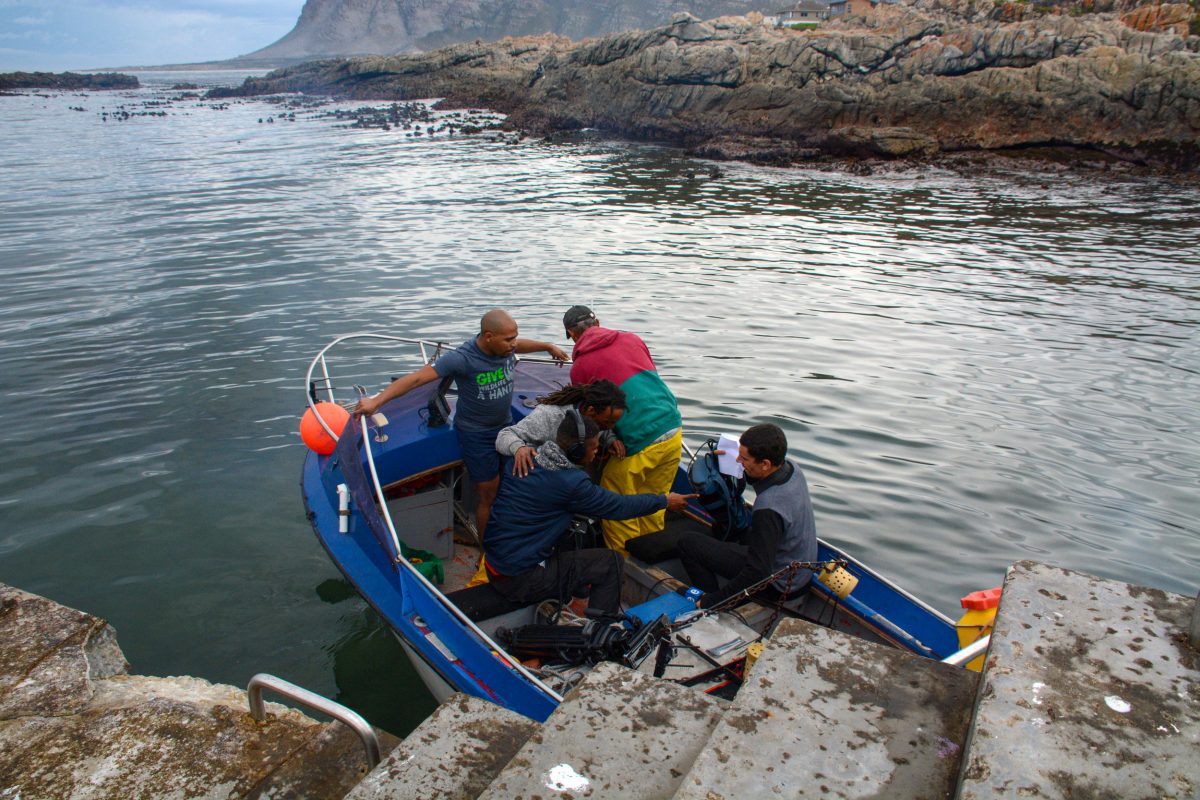 After almost 200 deployments of the BRUVs in 2017 and 2018, the team finally had some proof of the importance of the MPA to Kogelberg’s marine ecosystem. The data showed that the MPA boasted a high relative abundance of commercially important fish species and an incredible concentration of rock lobster—good news considering that nationwide lobster stocks are at two percent of pristine levels. As further proof of the benefits of reduced fishing pressure, they also found some spots to be “chockablock with mature red Roman and red stumpnose,” says Markovina, referring to two popular commercial fish species that are scarce outside of the MPA.

The research also contributed data to two published scientific papers on shark populations in the region. One showed that the MPA has a high abundance of endemic shark species, including the leopard catshark, sevengill cow shark, pyjama catshark, puffadder shyshark, and the relatively uncommon tiger catshark, says Markovina.

But perhaps the biggest upshot of the BRUV project has been rebuilding trust between fishers and CapeNature. “In the past there was no connection between us and them,” says Taylor, who over the last 30 years has frequently been harassed for shore-based fishing within the MPA, despite this being allowed. The project injects much-needed wages into the community and has demonstrated to the fishers how the MPA can act as a nursery for the surrounding fishing grounds. But, perhaps most importantly, the fishers’ participation gives them agency where they previously had none. A case in point is the fact that they’re now being asked for input into the activities permissible in the MPA. Having the once-disenfranchised fishers take steps toward eventual co-management of the area is vital, says Sindisa Sigam, WWF-SA’s small scale fisheries project coordinator. “They are at the forefront of the battle … If we are going to save the oceans, we have to have them on board.”

Challenges remain, however, and the BRUV project has not been a single-dose panacea. The MPA is still hammered by illegal abalone and rock lobster poachers, and fishers do sometimes stray into its waters to drop lobster nets and chase pelagic fish. Everyone involved in the project is aware that it will take more than a two-year collaboration with a dozen fishers to mend a five-decade-long dysfunctional relationship. As Taylor says, “There are a few things that I don’t agree with, but I do see more what they are talking about.” 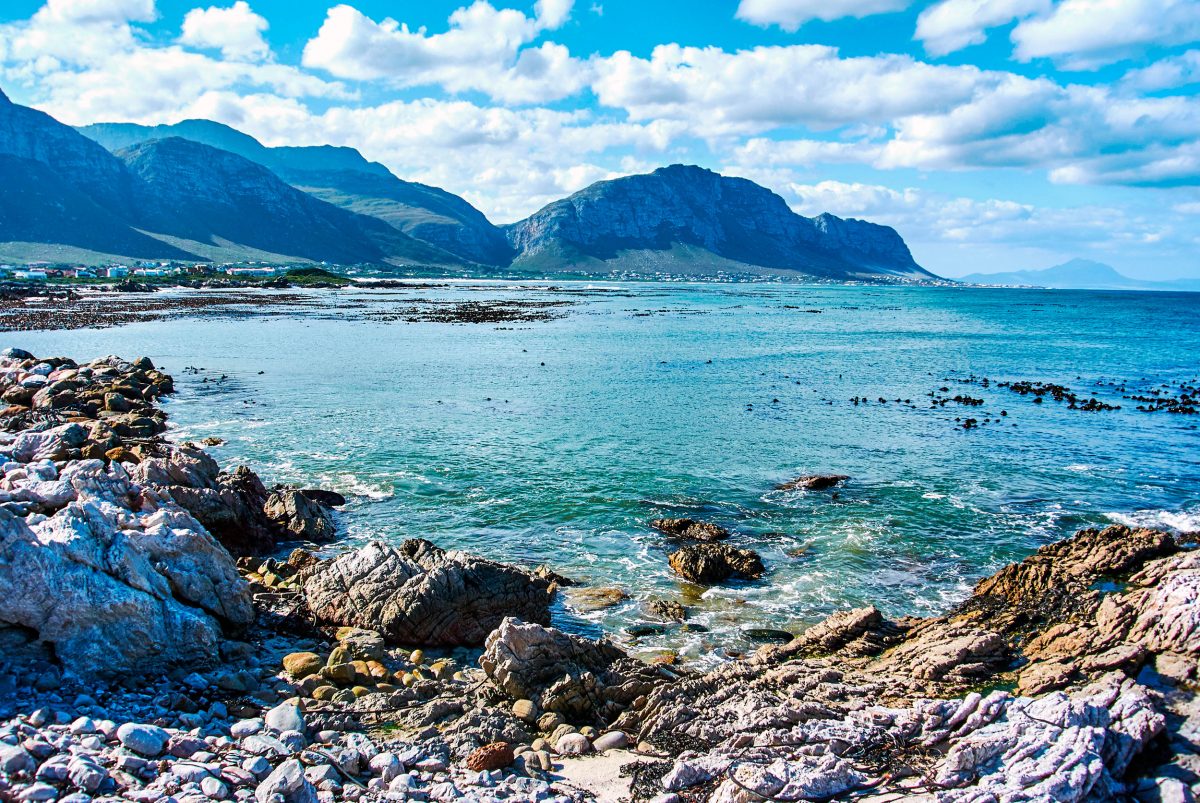 WWF-SA has just secured funding for an expanded five-year project that will benefit eight additional fishers and 14 new youth data analysts, news which leaves Taylor, who will stay on with the project, overjoyed. The new project is also a boon for scientists and administrators who will need more than two years of data if they are to make informed management decisions. The data will form part of a long-term MPA monitoring program, says de Villiers. “This means that vital information that will support the MPA’s management and possible expansion is being gathered by the fishers themselves.”

The experiment has been such a resounding success, says Sigam, that WWF-SA is hoping to gain community trust and run a similar project in the tiny coastal village of Hamburg, nearly 1,000 kilometers east of Kleinmond. This will kick off as soon as COVID-19 allows. Markovina, who will not be actively involved in either of these projects, says there’s no reason the model’s use should be limited to South Africa. “With a few tweaks, it could work anywhere in the world,” he says. “We’ve shown that fishers can be a really valuable scientific resource.” Not to mention a formidable ally in the battle to preserve our oceans.