Oyster numbers plummeted in Maryland’s Severn River and other tributaries of the Chesapeake Bay, but a big conservation push underway is giving them a boost. Photo by Edwin Remsberg/Alamy Stock Photo

How do you inject 24 million baby oysters into a river in one afternoon? Conservationists working on a tributary of the Chesapeake Bay near Annapolis, Maryland, have a trick: sluice them off a boat deck with a fire hose.

As the captain of a 22-meter-long buyboat reaches his first drop point on the Severn River’s tidal estuary in August, he signals to a deckhand gripping the hose at the ship’s bow. Water pumped from the river spews from the nozzle with the roar of a rushing waterfall, and the deckhand angles it at a pile of oyster shells as tall as a Christmas tree. Flea-sized larvae of the next oyster generation are attached to the underside of each one, and collectively they go shooting off the deck through several flap doors added specifically for this purpose.

From a nearby boat, the blasted oyster shells just look like a mess of murky water. The smell, however, is unmistakable—the same fishy, minerally smell that’s so pervasive in shellfish markets.

A slurry of water and young oysters sprays into the Severn River at a designated drop point near Annapolis, Maryland, during an oyster planting event. Video by Ally Hirschlag

This is the third oyster “planting” that the Severn River Association (SRA) and Oyster Recovery Partnership (ORP) nonprofits have collaborated on in the Severn River since 2018. It’s an effort they call Operation Build a Reef. After about 90 minutes, when the last shell has gone sailing into the river and fluttered to the dark, muddy bottom, and the incessant rush of the fire hose finally ceases, the partners will have cumulatively added 70 million oysters to the river. The hope is that these infusions will restore native oyster populations to a level where they can sustain themselves once again and benefit the ecosystem.

The project aligns with a much larger multi-organizational effort to increase native oyster populations throughout the Chesapeake Bay area, the biggest estuary in the United States, stretching from Maryland to Virginia. A state- and federal-run project known as the Chesapeake Bay Program, of which ORP is a partner, is set to restore oysters to 10 other tributaries by 2025. And a coalition called the Chesapeake Oyster Alliance wants to facilitate planting 10 billion oysters in the region, including those that have been added to the Severn so far.

Hundreds of years ago, oysters were plentiful in the Severn River and surrounding region. Local Indigenous tribes, like the Powhatan, Piscataway, and Nanticoke, harvested them sustainably for generations and amassed shell piles that were meters deep in some cases.

As the human population grew with colonialism, so did oyster harvesting. By the end of the 19th century, commercial harvesters were pulling an estimated 15 million bushels of oysters each year from Maryland’s portion of the Chesapeake Bay alone. Their dredging methods damaged the reefs, and by the 2010s, wild oyster populations in the upper bay had shrunk to about 0.3 percent of what they once were.

In areas like the Severn River, where salinity levels are relatively low, oysters don’t reproduce as much as they do in saltier waters, so the population has struggled to rebound. The oysters that persist are up against challenges such as excess nitrogen in the water—which can eventually starve them of oxygen—along with pollution from heavy metals and oil.

The lack of oysters means the water quality has suffered even more. Oysters are experts at water filtration: they feed on algae and filter sediment from the water. A single adult oyster can filter up to about 190 liters of water a day. Tom Guay, executive director of SRA, says the Severn River has experienced several mahogany tides in recent years, which suck oxygen out of the water and block sunlight, creating dead zones that kill local marine life. Oyster harvesting in the river, which was named an oyster sanctuary in 2009, was banned years ago because of health concerns related to the water quality.

If enough oysters are added to the Severn, Guay says the population should reach a size where it can reproduce enough to sustain itself, despite the obstacles.

Most juvenile oysters for the plantings are grown at Horn Point Laboratory Oyster Hatchery in Cambridge, Maryland. “What they do is they breed [oyster] larvae, and then they just put a whole bunch of shells in a big container, and those larvae attach to [the recycled] oyster shells,” explains Mark Bryer, of the Nature Conservancy, a partner organization in the Chesapeake Bay Program. This process is called “spat on shell.” Once they’re released into the river, the juvenile oysters form their own shells while remaining attached to the hosts. 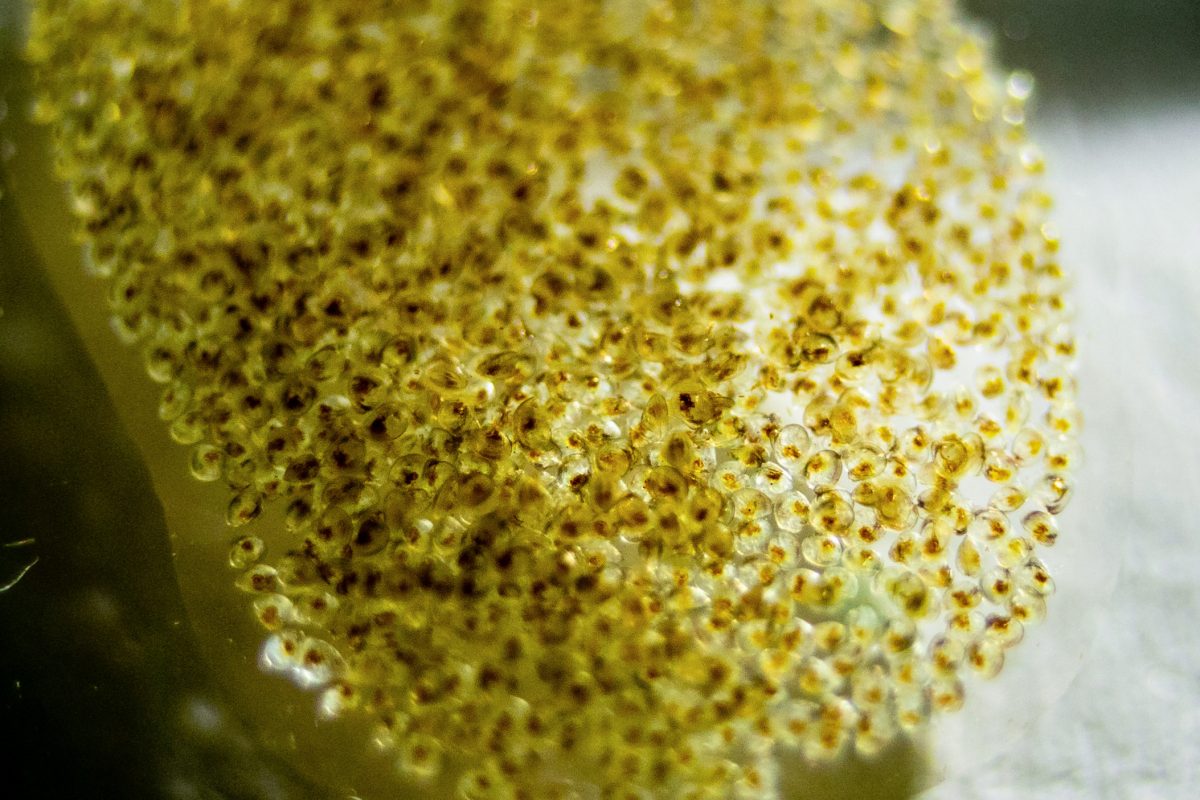 These tiny free-swimming juvenile oysters bred at Horn Point Laboratory Oyster Hatchery in Cambridge, Maryland, will soon attach to a hard surface for their life cycle stage known as spat, before being released into the wild. Photo by Will Parson/Chesapeake Bay Program

The shells used for the plantings are largely collected from restaurants and other seafood businesses in the area as part of ORP’s Shell Recycling Alliance. Locals can also drop off oyster shells at collection sites in Maryland, DC, and Virginia. The shell recycling initiative, the largest program of its kind in the country, has kept more than 8,164 tonnes of shells out of landfills since it began in 2010. And it’s part of a growing trend—most coastal states in the United States now have oyster shell recycling programs the public can participate in.

Aside from recycling shells, volunteers help the reef restoration projects by growing oysters off their docks through a program called Marylanders Grow Oysters. ORP gives homeowners one or more cages full of baby oysters on shells to grow for a year, then picks them up and plants them.

On the Severn River, the restoration team monitors reef health periodically by checking things like reef size, height, and oyster growth with the help of divers, including Emi McGeady, who works for SRA. The divers throw an anchor down and then have to feel around the sampling point for oysters to bring up for analysis because the water’s so murky. “The visibility is about a foot, maybe, in front of your face,” says McGeady. Guay also monitors the restoration progress and leads regular educational tours on his boat, the Sea Girl. His so-called floating classroom carries equipment that can assess water quality​ by measuring oxygen levels, pH, temperature, salinity, and clarity in real time. He hopes to eventually see a noticeable improvement in water quality near the growing reefs, but says there aren’t enough oysters yet. 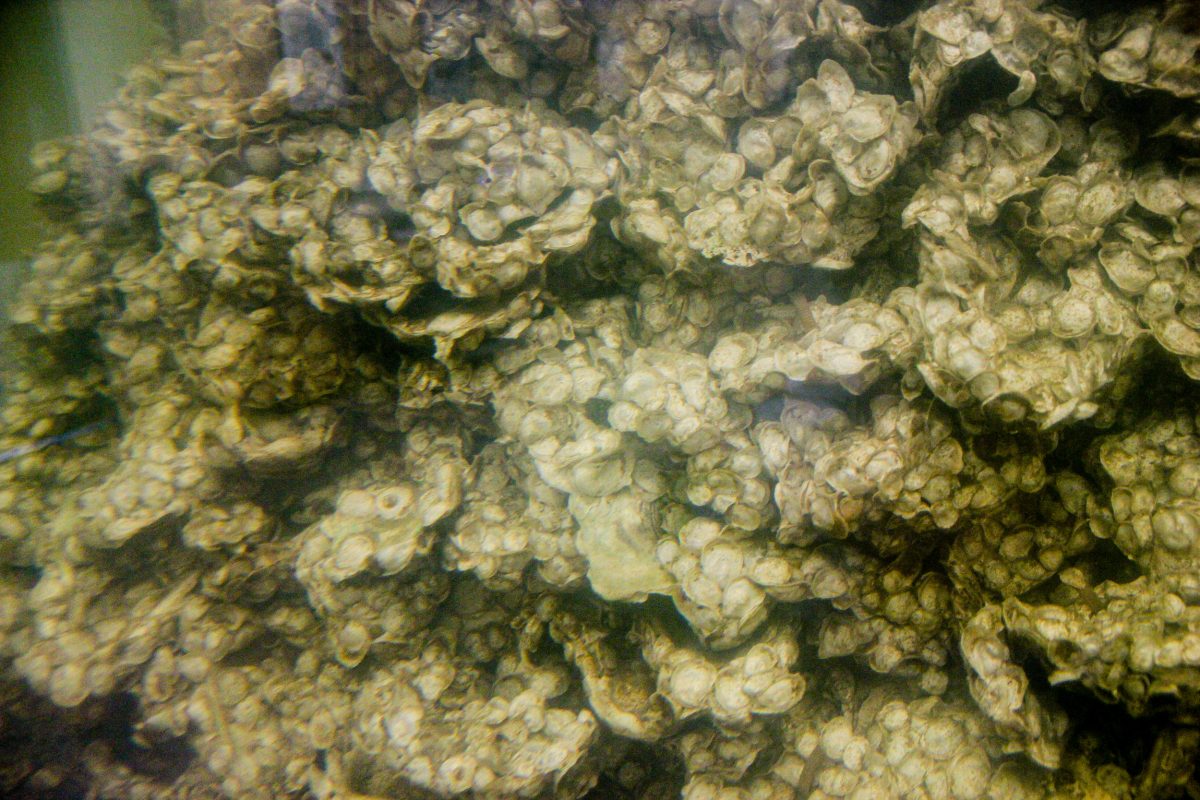 Oysters attach to one another in a river, forming a three-dimensional reef structure strong enough to withstand storm surges. Photo by Steve Droter/Chesapeake Bay Program

Other restoration efforts in the Chesapeake Bay area show encouraging results. In 2015, the Chesapeake Oyster Alliance added two billion oysters to Harris Creek southeast of Annapolis, making it the largest oyster restoration project in the world, and now the reefs remove an estimated 9,071 kilograms of nitrogen from the water each year as they incorporate it into their tissues and shells. A study by researchers at the Virginia Institute of Marine Science and the University of Maryland Center for Environmental Science found that 140 hectares of the restored reefs can filter the full volume of the creek in less than 10 days in the summer.

Similar oyster reef restoration projects are multiplying across coastal areas in the United States. In the Severn River, the focus is on water quality, but oysters are also increasingly valued for their ability to mitigate erosion and protect coastlines from storm surges by slowing water flow and absorbing wave energy. As storms intensify and sea levels rise due to climate change, many communities construct expensive sea walls to prevent erosion. But living shorelines like oyster reefs may be more efficient because they can rebuild on their own, don’t impact sediment transport like sea walls often do, and have the added bonus of improving water quality.

“In addition, they have the capacity to get stronger through time,” says Randall Hughes, a professor of marine and environmental science at Northeastern University in Massachusetts. Once planted, juvenile oysters begin to attach to one another and form a three-dimensional reef structure. As the reef becomes denser, it grows stronger. “In contrast, man-made structures are strongest when they are brand new and then depreciate through time.”

Though it’s too early to tally results in the Severn, the Chesapeake Bay Program claims successes in its drive to restore 10 nearby tributaries. The National Oceanic and Atmospheric Administration, a partner in the project, reports that by mid-2020, about 324 hectares of oyster reefs had been restored, with roughly the same amount left to go. About 96 percent of the restored reefs have 15 oysters or more per square meter—the minimum density deemed successful. 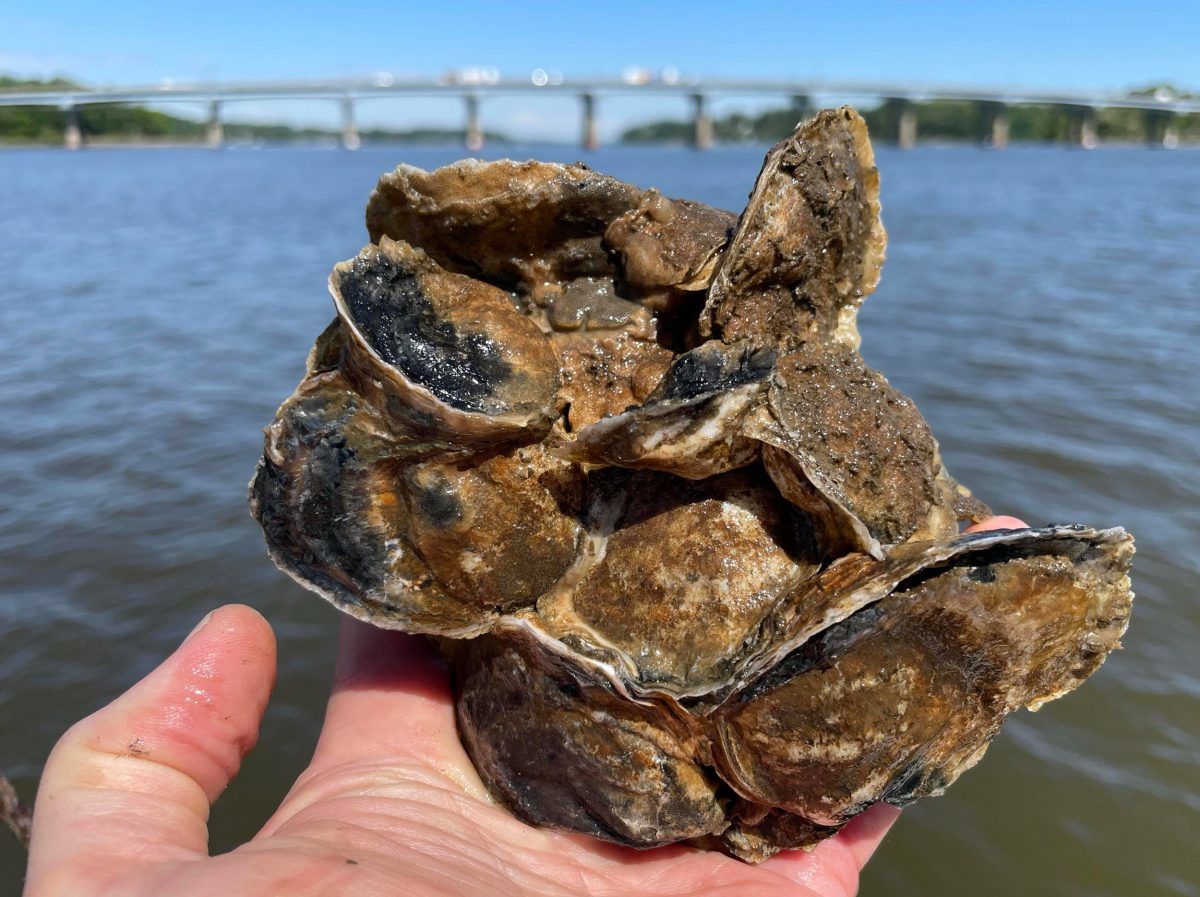 A sample of young oysters shows significant growth after one year in the river. Photo by Blue Moon Photography

For the Severn River oyster population to reach the critical mass it needs to become self-sustaining, Maryland’s Department of Natural Resources estimates conservationists will need to plant a total of between 1.3 billion and three billion oysters. That’s still more than 1.2 billion to go. But everyone involved celebrates every oyster planting because each one brings restoration goals one step closer to completion.

Another reason to celebrate is that planted oysters are surviving, says Guay. Some that were added years ago, before the current project, have grown to 15 to 20 centimeters across. “So you can see that they’ve lived a long time,” he says. Oysters are typically planted when they’re 0.5 to one millimeter wide, and they can grow up to two and a half centimeters each year. 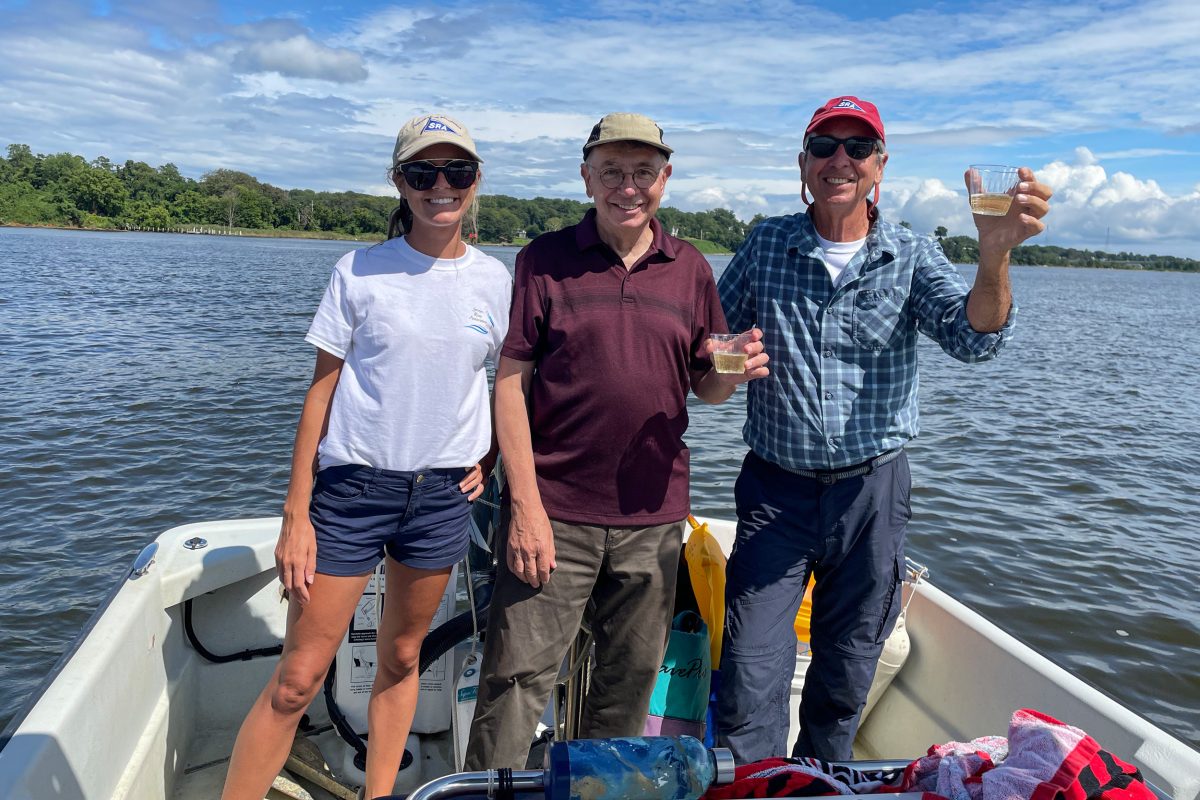 From left, Emi McGeady, Tom Guay, and Bob Agee, a sponsor of Operation Build a Reef, celebrate after an oyster planting in August 2021. Photo by Ally Hirschlag

On the river, after the last of the 24 million oysters has plopped into the water and the planting vessel departs, cheers ring out across the flotilla of half a dozen spectator boats, along with the popping of champagne bottles. As Guay is about to navigate the Sea Girl away, he points on his sonar screen to what looks like a jagged cliff rising from the river’s bottom. “When they reach up into the water column, that means they’re getting more access to food,” he says. Towers of hungry, growing oysters are exactly what he wants to see.