On October 4, 1987, the town of Fairhaven, Massachusetts (population 16,000), had a pair of unlikely visitors: Akihito, crown prince of Japan (today, the emperor), and his wife, Princess Michiko. Why would Japanese royalty visit this small American whaling and fishing port? The events that forged the unlikely connection between Japan and Fairhaven began 146 years earlier.

In January 1841, a young fisherman named Manjirō joined three brothers and a neighbor to form a small fishing crew, and set off from Japan. But an inopportune storm shipwrecked them on the volcanic island of Torishima. Stranded about 600 kilometers south of Japan, they spent the next five desperate months drinking rainwater, eating shellfish, and catching albatross to survive. Manjirō was only 14 years old.

Things looked bleak until the American whaler John Howland, commanded by Captain William Whitfield, appeared. It might seem like a miraculous rescue, but Manjirō and the others were terrified of the Americans. Japan’s borders had been closed for two centuries, and tales of barbarous outsiders had flourished. No foreigners were allowed in, and anyone who tried to leave Japan risked death by decree of the shogun. With little choice, the castaways boarded the foreign ship.

The whaler was en route to Honolulu and couldn’t detour to return the fishermen to their hostile homeland. As the ship sailed eastward, Manjirō began learning English and studied the ship’s workings. Impressed, Whitfield invited Manjirō home with him to Fairhaven to continue his education. Manjirō accepted. The others remained in Hawaii, working and hoping to find a way back to Japan.

In Fairhaven, Manjirō learned English—spoken and written—math, coopering, and navigation. Whitfield and his wife introduced him to their friends and defended their ward, even switching churches when their parish tried to segregate Manjirō.

But Manjirō never forgot Japan and his fellow fishermen. In 1846, he found work on a whaling ship to the Pacific where he visited his compatriots in Hawaii and learned that they had since tried—and failed—to gain entry back into Japan. He was determined to try again; a fortuitous gold rush in California offered the possibility of quick wealth and the money they’d need for passage. In 1849, Manjirō left Hawaii for California where he prospected just long enough—70 days—to make $600. With these funds he sailed back to Hawaii, bought a small boat, and secured passage on a ship that would take him, two of the fishermen (one had since died; another decided to stay in Hawaii), and their boat close to Japan’s shores.

Phase one of their plan succeeded: the three men launched their boat and snuck ashore. But, once on Japanese soil, they were intercepted and interrogated, often harshly. Finally, more than a year after he arrived back in Japan, and about 10 years after he was first lost at sea, Manjirō was allowed to return home to his family.

Meanwhile, a larger change was sweeping Japan, and Manjirō’s adventures went from liability to asset. His time in the United States made him a valuable translator during the opening of Japan, when its rulers ended the country’s policy of isolation and opened its borders to foreigners. Manjirō accompanied the first Japanese delegation to America. He also became a samurai—after which the shogun granted him a last name (he chose Nakahama after his home village).

The crown prince’s 1987 visit honored the ocean-spanning relationship between Fairhaven and Japan that was seeded by Manjirō’s friendship with Whitfield, all thanks to an extraordinary adventure. 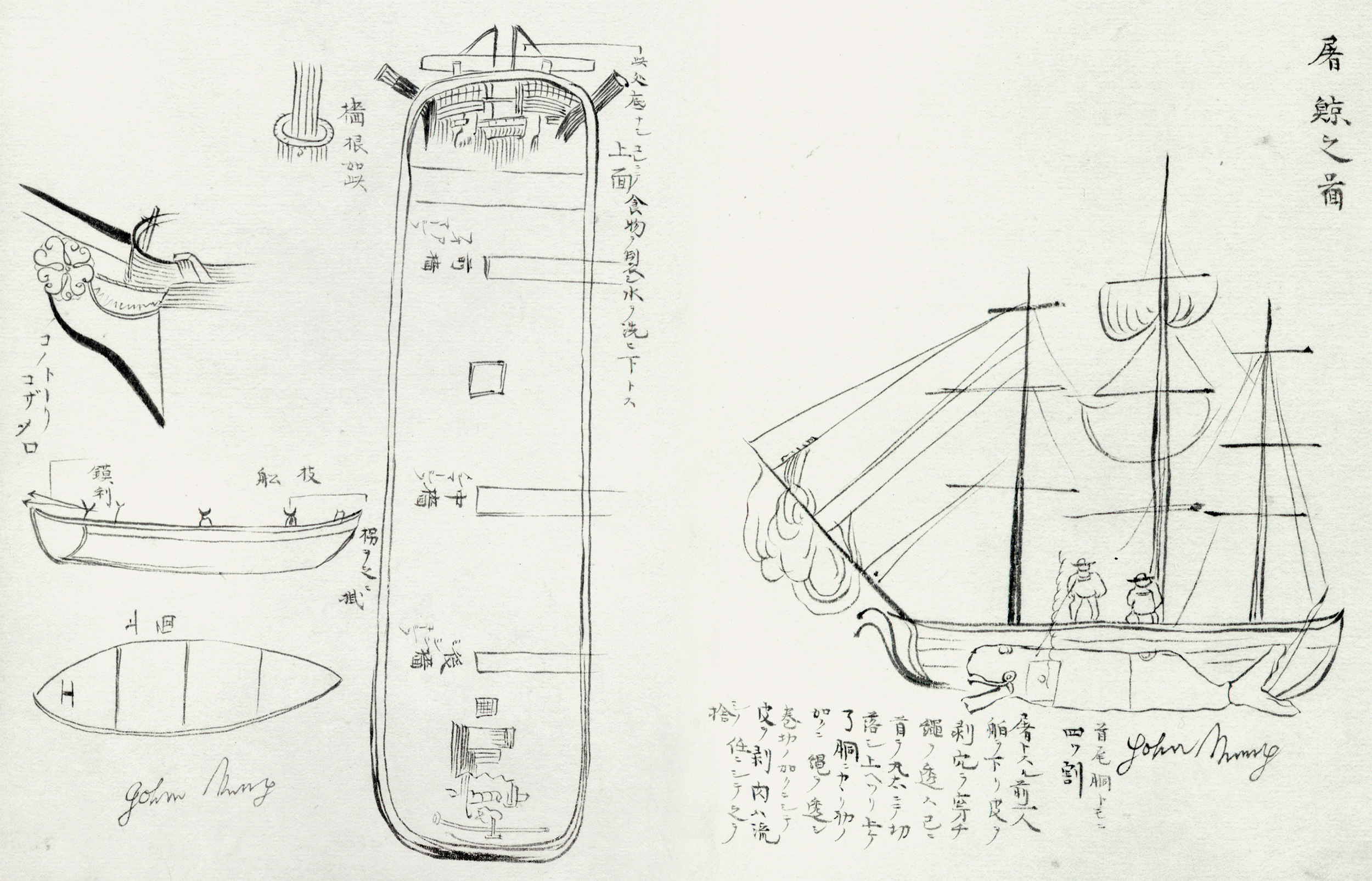 These sketches were done by Manjirō and signed John Mung, his Americanized name. They depict the John Howland and are included in a book of illustrations that was produced when Manjirō related his adventures to the shogun after returning to Japan. Images courtesy of the Rosenbach Museum & Library