Along the coastline of Louisiana, artificial islands provide habitat for fish and wildlife and help lessen the impacts of wind and waves. Photo courtesy of Martin Ecosystems

When Nicole Waguespack describes the Louisiana coastline, she thinks back to the early 1980s. In her memories, she’s still a little girl standing in the hot sun on the bank of a small canal near her daddy’s hunting and fishing camp. Hundreds of birds she can’t yet name fly overhead—tiny piping plovers, goofy-looking brown pelicans, and oystercatchers with their brilliant eyes so red they appear bloodshot.

Her siblings are there too, their fishing lines disappearing into the canal’s murky water where fish, shrimp, and crabs hide from the green nets of slow-moving boats. There’s thick, itchy grass up to her knees, mud between her toes, and marshland that stretches for kilometers.

Now, 35 years later, if Waguespack were to go back to that same spot, there would be no land for her to stand on. There’s just open water and sunken memories. And Leeville, her childhood home in Lafourche Parish, is just one of hundreds of communities lost to flooding across the US Gulf of Mexico coastline. 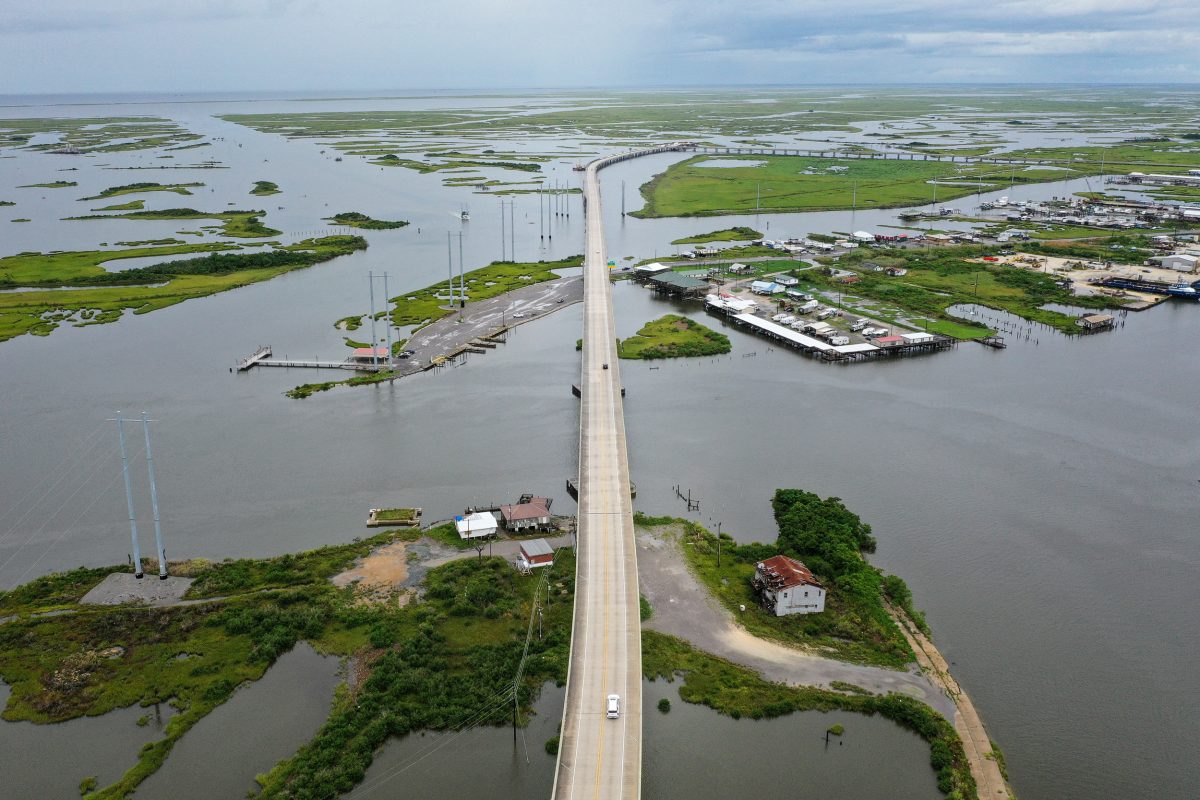 This 30.5-kilometer elevated stretch of Louisiana Highway 1 was installed in 2009 after flooding during storms and high tides became a constant issue. For the past century, Louisiana has been losing land and wetlands as the sea level rises and the land sinks. Photo by Drew Angerer/Getty Images

It took nature over 7,000 years to form this part of southeastern Louisiana. Draining the continent from as far away as the Canadian prairies, the mighty Mississippi River transports billions of tonnes of sediment downriver every year and spreads it in layers across the coastal plain through annual cycles of flooding. The resulting wetlands of the massive delta and the adjacent barrier islands provide safe habitat for 95 percent of the gulf’s marine species, and over 100 million birds stop here during migrations to nest and rest. More than two million people call the Mississippi River Delta home, too, living in communities rich in Cajun, Creole, and Indigenous heritage. But living here is becoming a struggle for all, due, in no small part, to the significant role humans have played in erasing thousands of years of nature’s work in less than 300.

As people settled along the river, they built earthen walls called levees to control water flow. The extensive levee systems cut off the annual flooding and resulting sediment deposits that counterbalanced the soil loss from daily waves and yearly hurricanes that surged in from the gulf. More recently, construction of deep canals for oil and gas wells further splintered the marsh ecosystem, and the added impacts of climate change—rising sea levels, more frequent storms, and stronger wave surges—have conspired to compromise the natural resiliency of the delta. Today, Louisiana infamously loses a football field’s worth of land every hour to erosion.

From a bird’s-eye view, Waguespack’s Leeville now looks like tattered green lace floating atop the gray-blue water. Cypress trunks, slabs of concrete where houses once stood, and the heads of cracked family tombstones occasionally break the water’s surface while a lone dead-end road runs along one of the few surviving strips of land. Other nearby communities are even more fractured. A few have been erased from survey maps altogether, flooded into oblivion. But Waguespack and her family are now playing a part in the efforts to save this body of land. 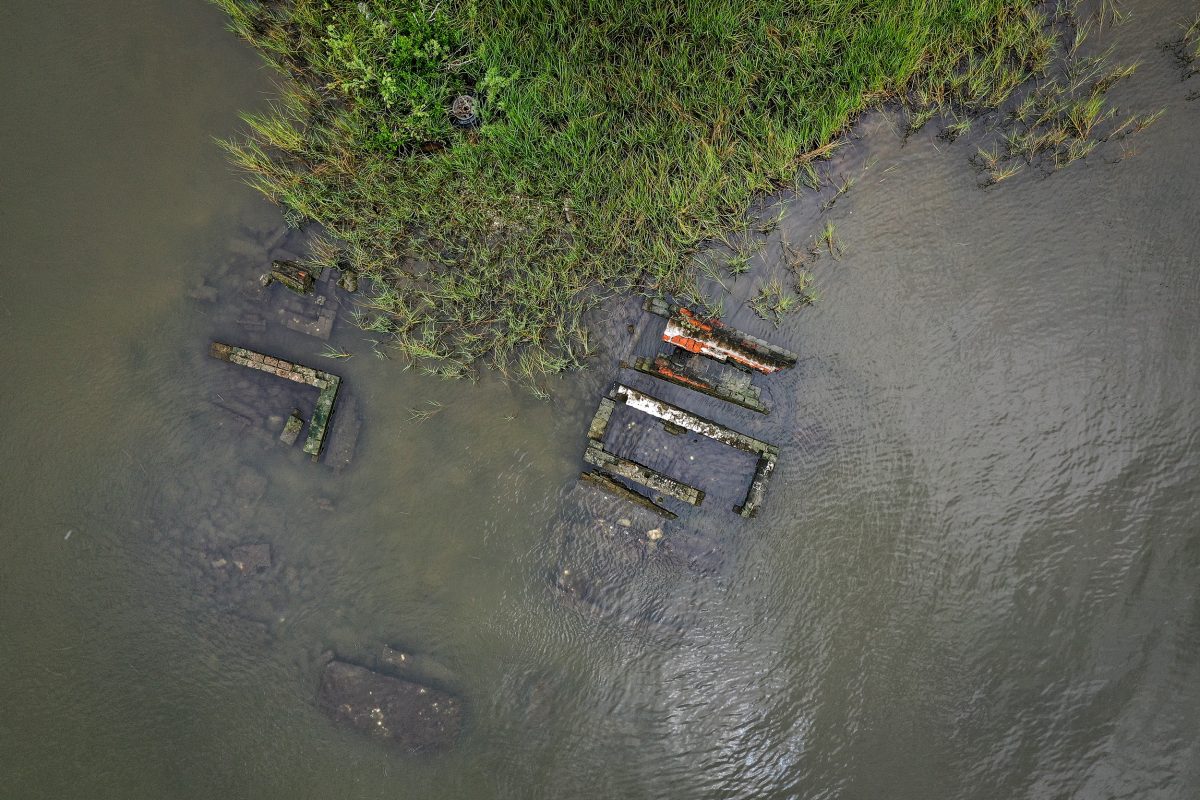 Graves from the Old Leeville Cemetery in Leeville, Louisiana, are now only accessible by boat. When the cemetery was built in about 1910, the land was approximately 1.5 meters higher than it is today. Photo by Drew Angerer/Getty Images

Around 13 years ago, her father and brothers were on a hunting trip in Montana when their guide introduced them to Bruce Kania, who later invited them to check out a new invention he’d devised on his farm. Bobbing in the middle of a pond were small islands made from recycled plastic. Reeds and sedges covered the islands, their roots snaking through the woven, Brillo pad–like mats and into the water below. While Kania used the plant-studded mats to treat the pond for contamination, Waguespack’s father, Ted Martin, saw another application.

Three years later, he and his children launched Martin Ecosystems to manufacture the artificial islands and use them to help restore Louisiana’s wetlands and barrier islands. With a licensing agreement from Kania, the Martins have completed dozens of projects since 2011 using his design—a fiber matrix woven from recycled plastic bottles. A few of the projects were privately contracted, but most have been funded through the Coastal Conservation Association of Louisiana (CCA) as well as through partnerships with local parish governments, the US Fish and Wildlife Service, and several other nonprofit organizations dedicated to the conservation of wetland wildlife habitats.

The mats, which are usually about six meters long and 1.5 to 2.3 meters wide, are first planted with native vegetation and then towed into shallow waters and anchored in rows of up to 20 or more. Like barrier islands, the floating breakwaters act as speed bumps for wind chop—the short but persistent waves responsible for much of the coastal land erosion. As the vegetation grows, it provides cover for nesting birds; as the roots thread down through the matrix and into the water, they make a complex ecosystem for aquatic life. 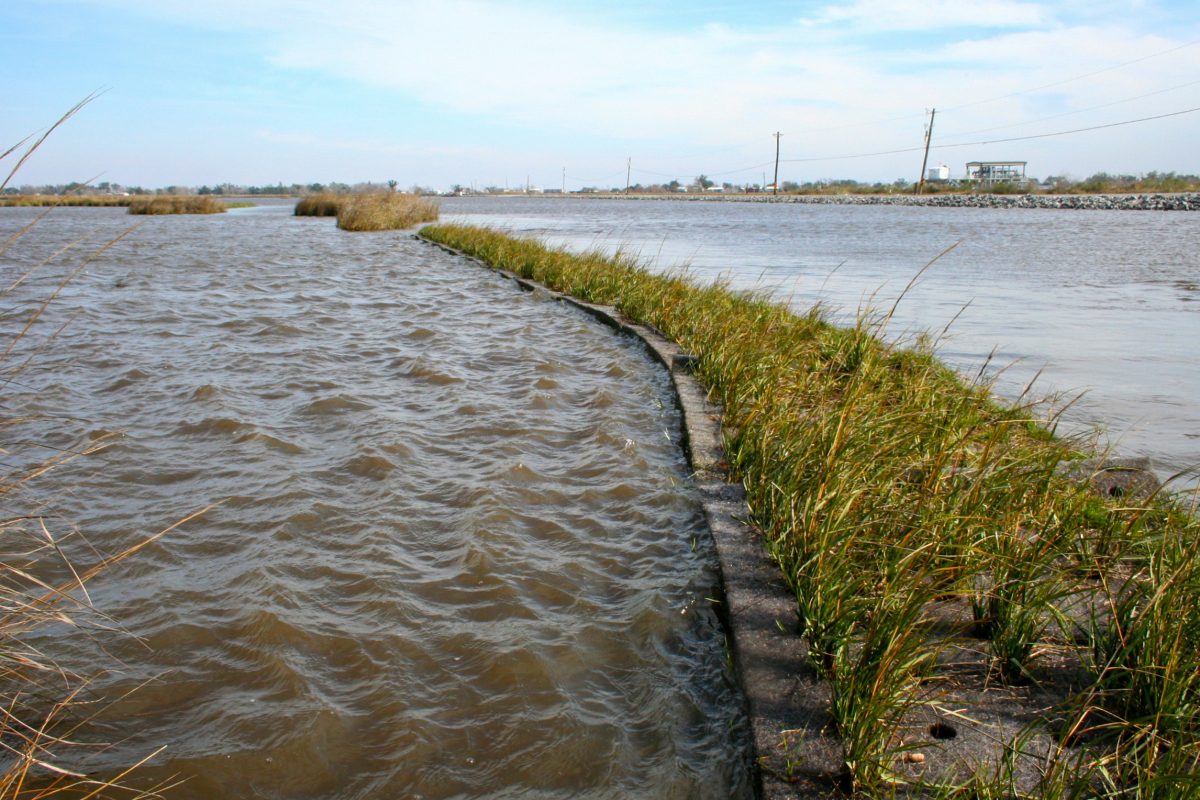 Artificial floating breakwater islands help reduce the impacts of waves and wind on coastal regions. Notice the calmer water on the lee side of the berm. Photo courtesy of Martin Ecosystems

Following the success of the breakwater, the Martins devised another application for the matrix, securing it straight to the shoreline and dubbing it Vegetated EcoShield to distinguish it from the free-floating breakwater islands. Anchored in strips across the face of weakened levees and berms, it helps stabilize loose soil and reduce wave energy. Once in place, the roots of the vegetated matrix eventually grow down to meet the natural levee, further strengthening the new living shoreline.

The Martins’ first EcoShield project, in 2014, was a 200-meter test strip along a dirt berm commissioned by local and state government agencies to protect a nearby marsh. Two weeks after installation, a tropical storm came through, eroding the remaining 1,200 meters of the unprotected berm by up to 1.5 meters in certain areas. “They told us to please just come back and finish the whole thing,” says Waguespack.

After several years and several hurricanes, all of the Floating Breakwater and EcoShield installations are still in place and thriving. The plant cover grows quickly, usually doubling within the first three months, and testing by the University of South Alabama shows that the artificial islands dampen wave height by up to 80 percent. Both products bear the brunt of wave energy, reducing the waves’ capability of stripping soil and thereby allowing the land a chance to recover. 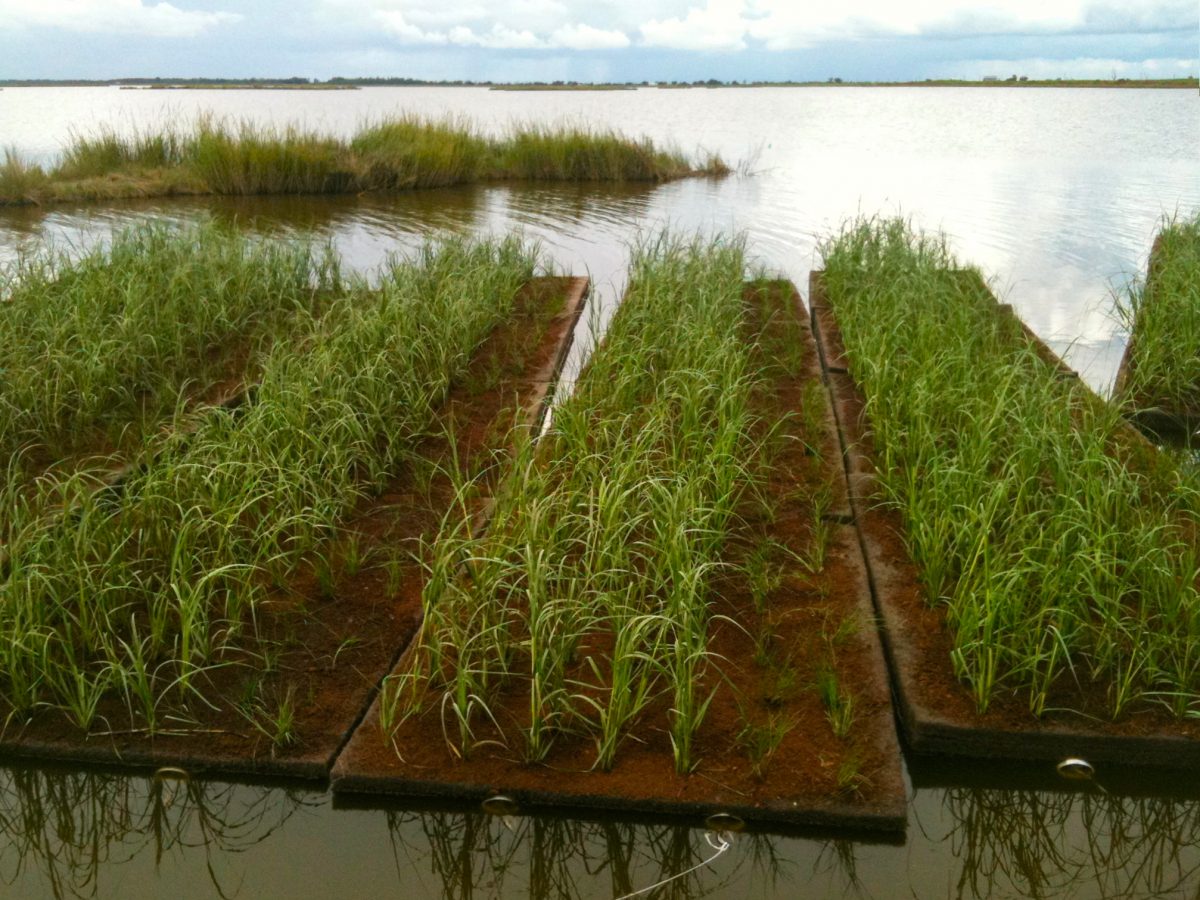 Newly planted artificial islands, made of a fiber matrix woven from recycled plastic bottles, are ready to be moved and anchored into position. Photo courtesy of Martin Ecosystems

Joey Breaux, a leading agricultural environmental specialist with the Louisiana Department of Agriculture and Forestry, oversaw the installation of five breakwaters for the Louisiana Association of Conservation Districts several years ago. He says common gallinules, king rails, seaside sparrows, least bitterns, and mottled ducks have nested on all five, and when he last checked on the sites, he found that the coastline behind the new breakwaters had stopped eroding. “Time and funds permitting, I would like to install more of these islands.”

The Martins continue to refine their techniques as they partner with diverse groups on a variety of projects throughout Louisiana, but the basic design remains the same. A company in Georgia creates the plastic matrix of wiry mats, using 30 recycled bottles for every square meter of matrix. The Martins then cut the mats to size, layer them and inject the stack with a coast guard–approved marine foam for buoyancy, and apply a UV-resistant coating to prevent breakdown.

Waguespack acknowledges, though, that their products land them in a catch-22 situation—putting plastic into the water to help save the Louisiana coastline. While the entire structure is designed to be impact-resistant and is made of materials that are inert and non-toxic to aquatic life, they’re just now starting to test whether these precautions to reduce their environmental footprint and minimize microplastic breakdown have been successful. “We are recycling bottles which would otherwise go into the environment as is,” she says. “But we understand we always have more testing and research to do.” They’ve now partnered with the International Institute for Sustainable Development (IISD) to research the matrix’s filtering capacity for oil spills. After this, they’re planning to do further studies with Louisiana State University and, hopefully, with IISD as well, to ensure that the matrix doesn’t shed microplastics. 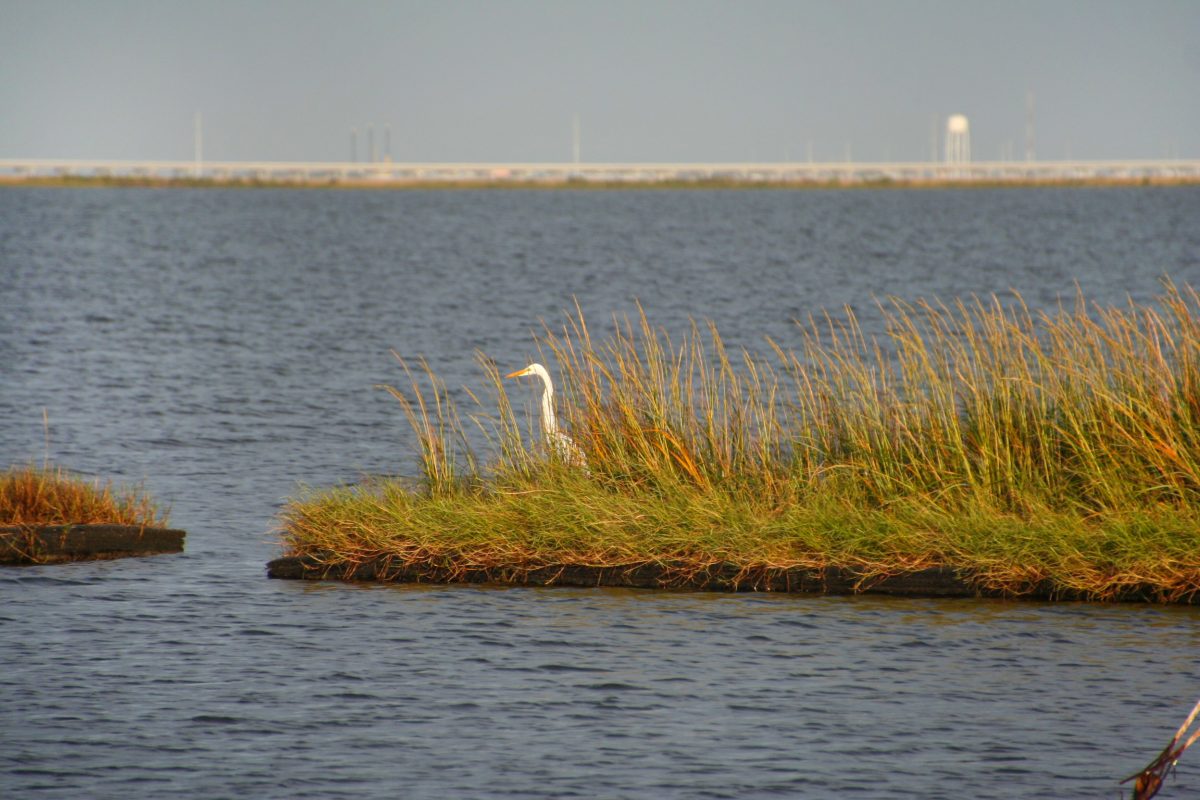 Vegetated artificial islands provide cover and nesting habitat for birds. As well, plant roots extend into the water, which helps anchor the island and provides habitat for fish and other aquatic life. Photo courtesy of Martin Ecosystems

“We are just one tool in the toolbox,” Waguespack says, referring to the fact that it will take more than one approach to restore the wetlands, but they take their role seriously. “We’ve gone back and redone old projects on our own dime.” That first 2011 project with CCA, for example, used earthen anchors to install the breakwater in a Biloxi-Chitimacha-Choctaw tribe’s sinking community. Later, the Martins learned about helical anchors, which are more resistant to storm surge and don’t require disruptive, vibrating equipment for installation—an important factor in weakened wetland environments. In 2013, they returned to the area after a hurricane to not only install more islands but also to replace the earthen anchors on the old islands with helical ones.

“We want it to work. We live here. This is our home,” Waguespack says.

This past April, Martin Ecosystems teamed up with local schools to launch breakwater islands in Vermillion Bay. The children helped plant the islands with smooth cordgrass, seashore paspalum, and buckets of peat moss before the mats were towed into the bay and anchored.

If those children visit again a few years from now, it’s expected those marsh grasses will be up past their knees, providing protection for eggs laid by mottled ducks, and the root system growing underwater will be a welcome home for redfish and trout—favorites of local fishermen. Around them, hopefully, there will still be kilometers of intact delta land, and out in the bay, those artificial islands lush with vegetation and alive with wildlife.