Richardson Bay in Sausalito, California, is many things: a floating neighborhood of over 250 domiciles, an icon of the 20th-century counterculture movement, and a place to buy expensive art. It’s a place people write about and sing about, although none have composed the opera. Yet. (Proposed title: Raucous-ito.)

The modern story begins at the end of the Second World War when the demand for naval vessels fell and the Richardson Bay shipwrights working for the United States Navy packed up. Struggling artists took advantage of the void to fashion a fleet of their own: unique and artistic floating homes. These bohemians, beatniks of the 1950s and early 1960s, commandeered and repurposed old ferries and barges, salvaging the shipwrights’ abandoned lumber and steel to build whimsical homes: a floating Taj Mahal and towering pagodas, for example. The wild energy drew some offbeat personalities to Sausalito waters—author Shel Silverstein, surrealist painter Gordon Onslow Ford, and, yes, Otis Redding, who conceived the hit song Sittin’ on the Dock of the Bay while sitting on the dock of a rented float home in 1967. The first few lines captured the zeitgeist of a new era and were an earthy rendition of psychologist Timothy Leary’s 1966 call to drop acid and “turn on, tune in, drop out.” At Richardson Bay, simply sitting on the dock all day, every day, was okay. 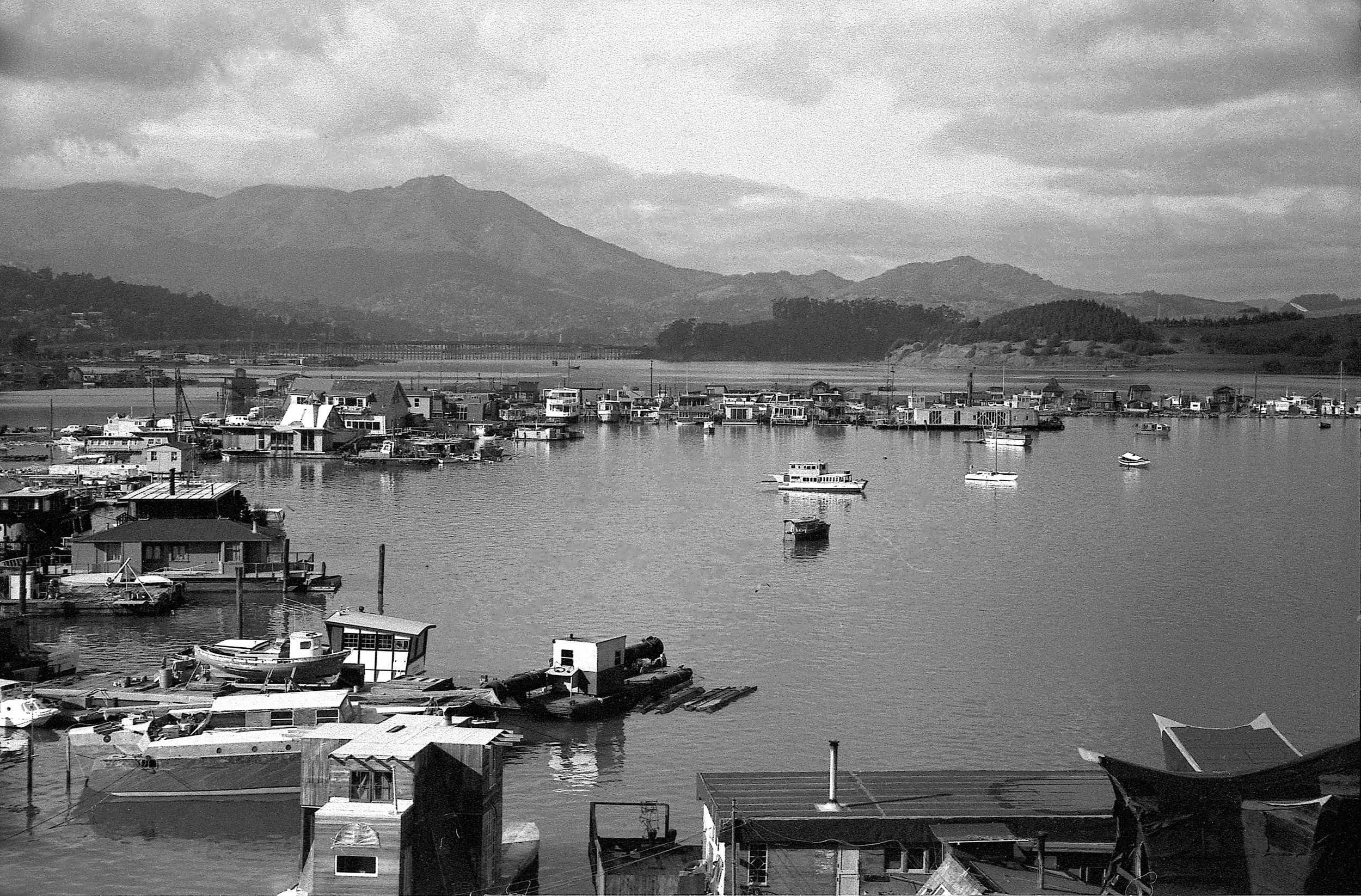 In the 1970s, the floating community of Sausalito’s Richardson Bay, set against the backdrop of Mount Tamalpais, was primarily home to bohemians whose modest dwellings had been constructed from salvaged materials. Photo copyright Walter Van Voorheers/Sausalito Art Source

Despite all the peace, love, and understanding, the utter cultural chaos of the 1960s and 1970s led to a revolt—not on the docks but among the landlubbers from the surrounding neighborhood. The “Hill People” complained about the eyesore created by the cobbled-together boats and float homes. The crime of living rent-free grated on others, mostly developers. The “houseboat wars” brought out the worst in everyone: the city threatened to set fire to some of the barges, and some inhabitants, according to a 2014 radio documentary, poured barrels full of poop onto raiding police officers.

Some dock residents retreated. Others hung on and formed the Gates Cooperative—its one rickety dock was the last stronghold of the unconventional, and the dwellings were a glaring contrast to the hundreds of upscale (or at least up-to-code) float homes that rose around Richardson Bay over the years. By the early 21st century, the cooperative had 38 floating homes and a legacy of lawlessness; within such an affluent area, it was also a constant reminder that people deserve affordable housing.

In 2014, after over two decades of wrangling with residents in the courts, the city began to rehabilitate or dismantle and rebuild the Gates Cooperative’s float homes. Some of the float homes will moor at a new dock. Others will slip into existing docks. By 2016, each of the homes—officially designated low-income—will comply with building codes.

Today, the Richardson Bay float homes have a website, the homeowners host an annual open house for the curious costing $45 per person (some of the proceeds benefit local non-profits), and the Sausalito Art Festival—now in its 63rd year—features premium wine along with art. The beatniks and the hippies have grown up. 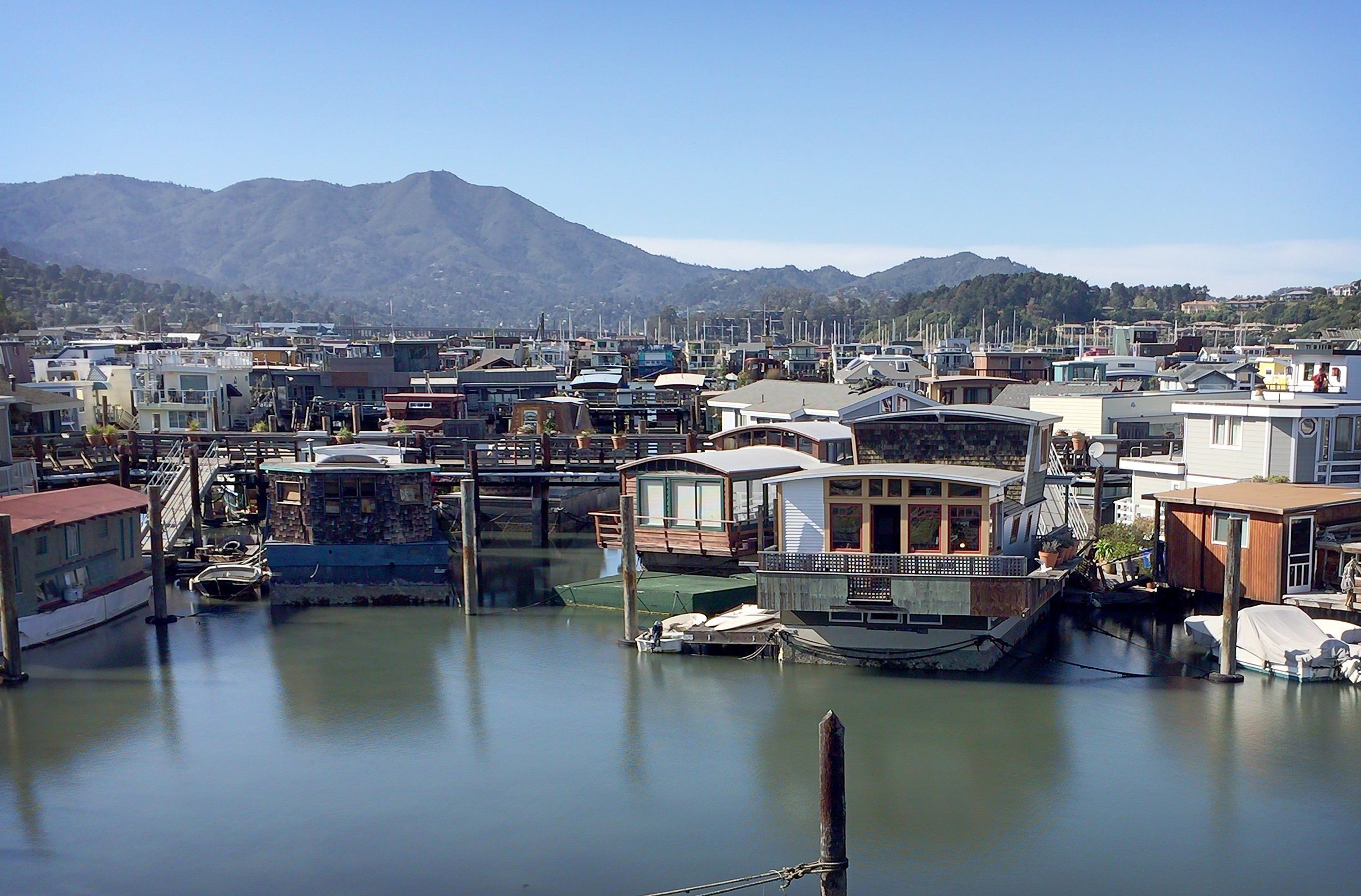 Richardson Bay, viewed from the same dock, has greatly evolved over the last 40 years, with more elaborate homes and double the population. Photo by Shannon Stirone