September 19 is International Talk Like a Pirate Day, but since no one can sustain more than two minutes of talking like a movie version of a pirate without damaging a vocal cord or two, maybe it should be the day to dress like a pirate.

To dress like a pirate—a very specific version of a pirate, from the Golden Age of Piracy, roughly 1690 to 1720—takes an investment of time or money, or both. To dress like a mythical pirate, such as Captain Jack Sparrow in Pirates of the Caribbean, while exciting, is also costly (like most fashion extremes). There’s the long damask or brocade frock coat, the jewelry, the frilly shirt with lacy sleeves, the deadly rapier, the thigh-high leather boots … wait. Boots?

“Pirates did not wear boots,” says Kass McGann, a costume historian based near Philadelphia, Pennsylvania. Nor did real pirates wear frilly lace shirts, long frock coats, jewelry, or swords. Some of them wore the cocked hat (called a tricorn today), McGann says, but they wore it with the broad side facing front (less surface area for the wind to catch).

McGann and archaeologist Russell Skowronek point out that during the Golden Age of Piracy sailors were sailors, whether pirates or navy seamen, and most navies had no set uniform. Sailors, however, uniformly had the same job to do and had to dress appropriately. “The average, successful pirate blended in,” Skowronek says, which makes it tough to find them in the archaeological record, since their material culture was the same as any other sailor’s. An obvious pirate was essentially a dead pirate.

To dress like a real pirate, that is, a sailor in days of yore, meant buying clothes hand made by someone else—mass produced clothes were at least a century away—or sewing your own.

The good news for Golden Age of Piracy fans is that you can forgo underwear—it’s inauthentic. The bad news is that a long shirt tied sort of like a diaper is authentic.

Here’s what you need to dress like a Western European pirate between the years of 1690 and 1720. (Without wool, would sailors have ever sailed across the cold ocean?)

This round knit cap often had a loop or button at the top for hanging. The wool cap kept the head warm, wet or dry. Even in the tropical Caribbean, when a sailor was up in the rigging doing sailor things, it could be cold and windy. Forget the cocked felt hat, the cheaper cap—à la Steve Zissou—is just as much the real deal.

The legs of breeches might stretch down to the ankles like pants, but they were generally tied at the knee when sailors weren’t scampering up the rigging. Untied, the wide breeches allowed the men to lift their legs high without worrying about putting on a show—splitting the fabric on their backsides. A leather pocket sewn into the side seam was fastened with either buttons or a drawstring (like a medieval purse) and held coins, tobacco, a small clay pipe, and maybe shot for a pistol and a knife—ar, matey—for spearing grub. Breeches were buttoned closed.

If you’ve ever knitted with three needles and turned a heel, you know how complicated it is and how long it takes to knit socks. Instead, a sailor’s stockings would have been cut out of woolen broadcloth. And he might have—gasp—five pairs! If he was hot, a sailor could untie the garters that held up his stockings and roll them down. Low-heeled leather shoes slipped on and had one simple buckle. (By the way, re-enactment enthusiasts, finding authentic shoes is akin to finding the Holy Grail.)

A collarless, loose linen shirt that flowed to the knees, tied at the neck, and buttoned along the wrist allowed freedom of movement without flapping around in the wind. Lace and frills? Fun, until a sleeve catches on the rigging and a sailor loses a hand and spends the rest of his life with a hook. Sailors wore a woolen waistcoat (a buttoned vest) lined with linen over the shirt. A fitted woolen jacket stopped at the waist, with a skirt that flared a bit over the hips. It had a high-stand collar and buttoned in the front and at the sleeves.

A pirate’s cutlass was really just a machete. Anyone could use it. A sword took practice. 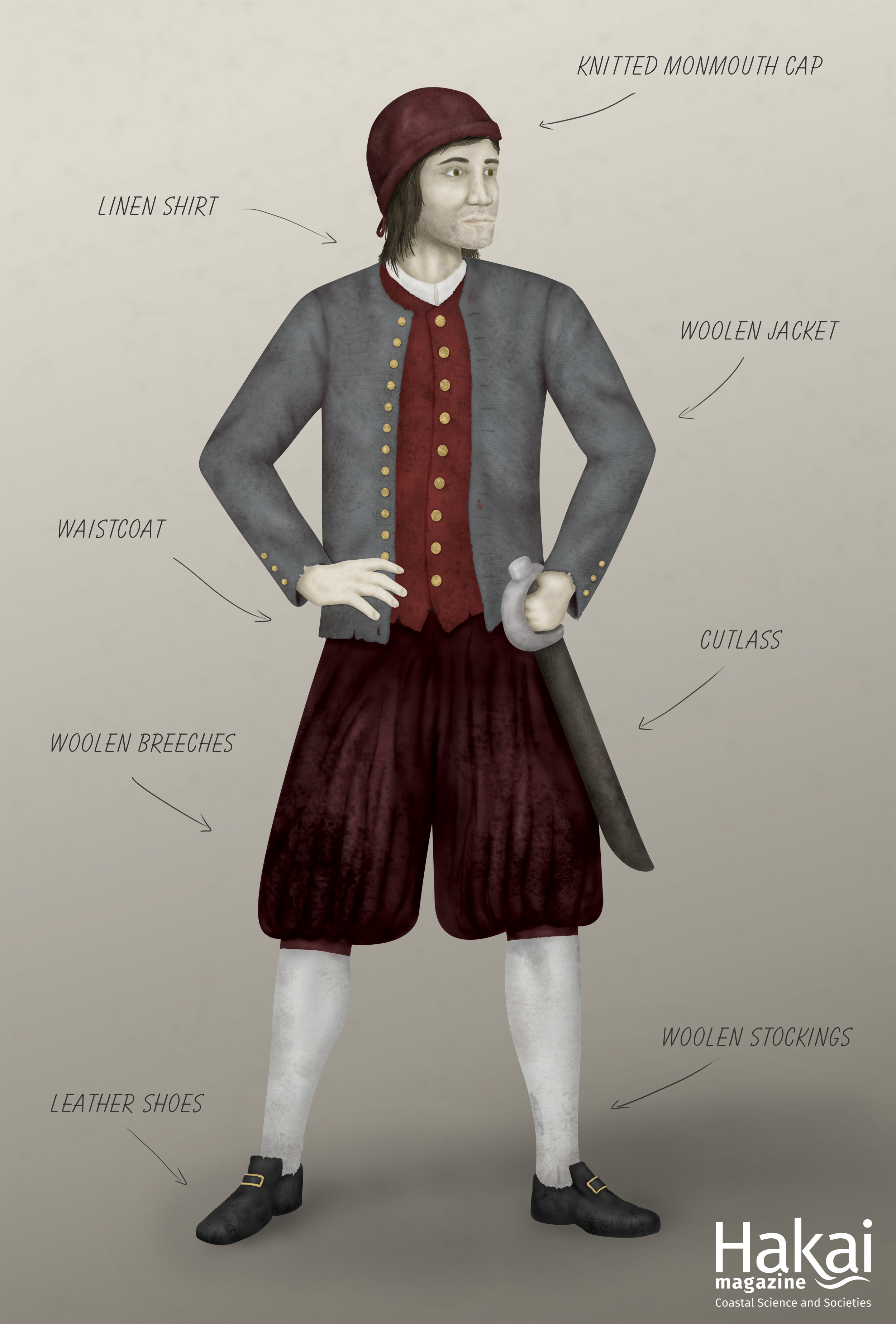 How a European pirate would have dressed in the Golden Age of Piracy. Illustration by Mark Garrison