It isn’t easy sharing an igloo with snoring men. When Arctic explorer Matthew Henson found himself in this predicament, he resisted the urge to tell his Inughuit (Greenlandic Inuit) igloo-mates to shut up. Instead, he gently woke them under the guise of checking on their comfort and then, while they were still awake, he quickly slipped into slumber, conking out before the racket restarted. Henson was the kind of guy who would give you the bearskin shirt off his back—or at least hold your foot under said shirt so the warmth of his body could thaw your frostbitten toes (true story). His respect and love for the Inughuit people earned him the name Maripaluk: Kind Matthew.

Henson was Commander Robert Peary’s right-hand man and accompanied him on six voyages to the Far North, the final of which saw them reach the North Pole on April 6, 1909, becoming the first Americans to do so. The intrepid explorers’ journeys involved traveling by ship from the United States to Greenland or northern Canada and then trekking by dogsled across the Arctic sea ice, accompanied by Inughuit hunters and additional American assistants.

Henson took a keen interest in learning the Inughuit ways of life. He dressed like them, became fluent in their language, mastered their traditional arts of building and driving dogsleds, and embraced their cuisine (learning to hunt, skin, and enjoy seal, for example). Over the years, Henson proved himself to be both popular with the Inughuit and a vital member of Peary’s polar party. Indeed, Henson was the commander’s longest serving assistant and easily the most efficient. So when the commander had to choose one American member of his crew to accompany him and four Inughuit men (Ootah, Egingwah, Seegloo, and Ooqueah) on the final push to the pole, Henson was first pick.

After facing down fierce conditions—biting winds that froze their beards to their hoods, jagged ice they had to pickax their way through while hauling 250-kilogram sledges, black waters that unceremoniously swallowed them whole when they slipped on uneven ice, not to mention all that snoring—the six men stood at the top of the world. When the wind picked up and Peary’s tattered silk American flag rippled out, a rush of patriotism pulsed through Henson and he let out a victory cry.

But when the expedition returned to the United States, the conquest was marred by controversy, much of it focused on race. Questions arose as to why Peary chose to take a black man over a white man on the last leg of the journey. Henson was not a credible witness, critics charged; had they even reached the true North Pole? Peary defended his decision, saying Henson was indispensable, but later snubbed his loyal companion. Meanwhile, another American explorer, Frederick Cook, claimed he had beaten Team Peary to the North Pole by a year. While Peary eventually collected accolades, Henson received no fanfare and his role in the achievement was downplayed. Among the Inughuit, however, Henson was not soon forgotten.

On his penultimate trip to the Arctic highland, Henson fathered a son with an Inughuit woman, Akatingwah; the boy was born in 1906 and named Anaukaq. Peary, a married man with children back home, also had a relationship with an Inughuit woman and they had two boys. The explorers likely saw their children when they returned triumphant from the pole, but it was for the last time. 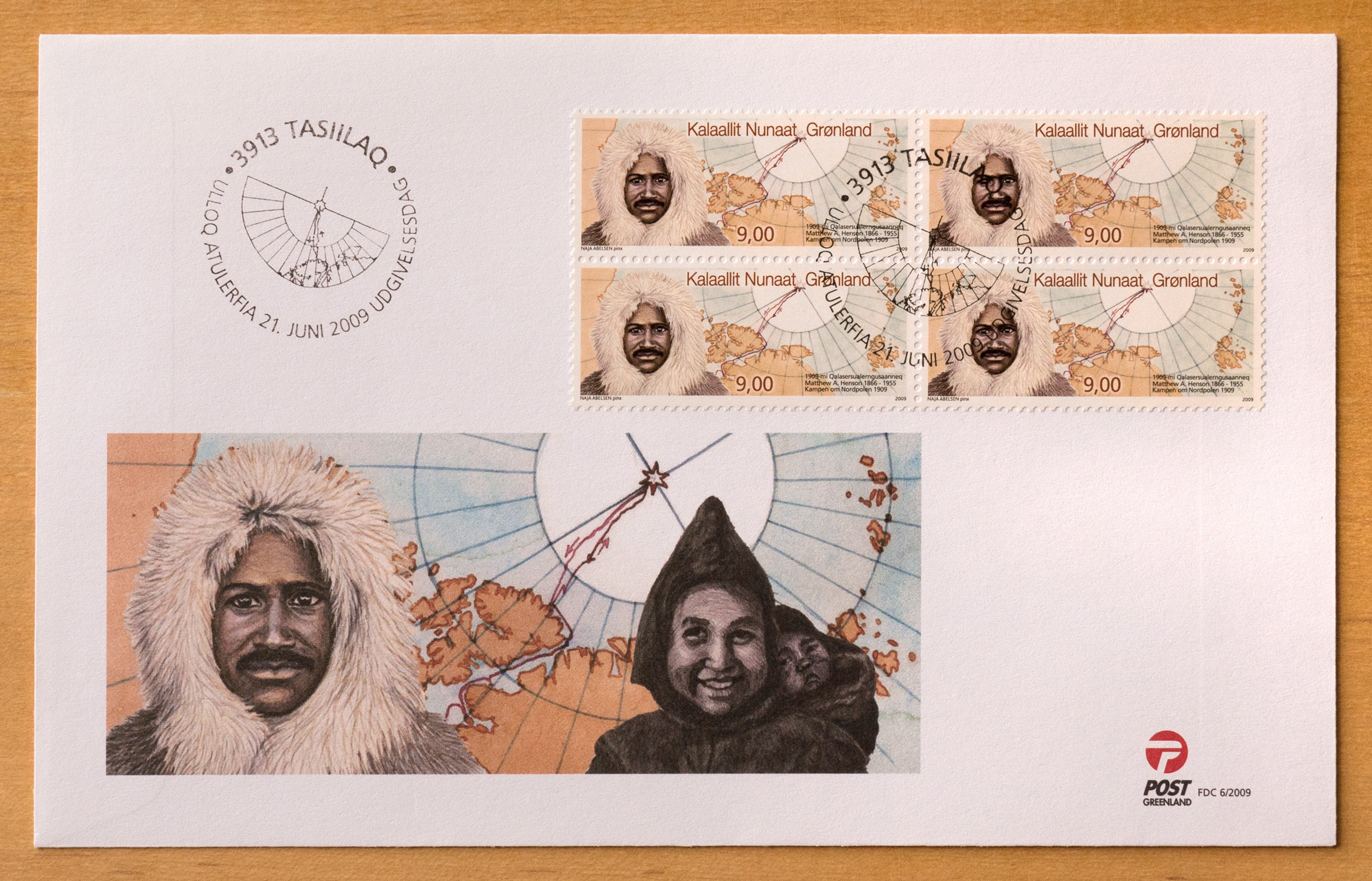 This first-day cover includes an image of Akatingwah carrying Anaukaq, the son she had with Matthew Henson. Image courtesy POST Greenland

When Harvard professor S. Allen Counter tracked down Henson’s descendants in Greenland in 1986, he found a lineage of people proud of their links to the historic achievement. Anaukaq, then an octogenarian, told Counter he grew up hearing stories about his father, who was welcomed by the tribe. Counter also located Peary’s son Kali, who, in contrast, reported that his family had been poorly treated by the tribe because of his mother’s dalliance with the less popular explorer. Counter brought the men and some of their family members to the United States to meet their American relatives, and also led the charge to get Henson the recognition he deserved, including having his remains reinterred in Arlington National Cemetery—alongside Peary’s and those of other American heroes—on the 79th anniversary of the discovery of the pole in 1988.

Stories of Maripaluk continue to be passed down, inspiring new generations of Hensons to keep his memory alive. In 2009, Maripaluk’s great-granddaughter Aviaq Henson worked with POST Greenland to commemorate the 100th anniversary of the Arctic achievement with a stamp. The first-day cover includes an image of a smiling Akatingwah with little Anaukaq strapped to her back—a reminder of the legends and legacy Henson left behind.