This story was originally published by High Country News and is reproduced here as part of the Climate Desk collaboration.

A dozen twists of a knife were all it took to tarnish the unblemished reputation of Washington’s oysters. It was 2017, and Teri King, an aquaculture specialist for Washington Sea Grant, a marine research institute, had been invited to shuck shellfish at a seafood event in Shelton, Washington. She was there to teach people about the local oyster industry, which is prized for producing delicious half shells with perfect, pearly white interiors. But her lesson soon took a dark turn. As she wedged her knife under the lip of an oyster, it split a hidden blister inside the shell.

King watched in disbelief as black ooze bled into raw meat. “I don’t know what’s happening here,” she remembers telling her audience. “But let’s find you some better oysters.” To her embarrassment, it kept happening. It took 13 or 14 oysters before she finally produced a presentable half shell. King had occasionally noticed these blisters during her 30-year career, but she’d never before seen so many at once. 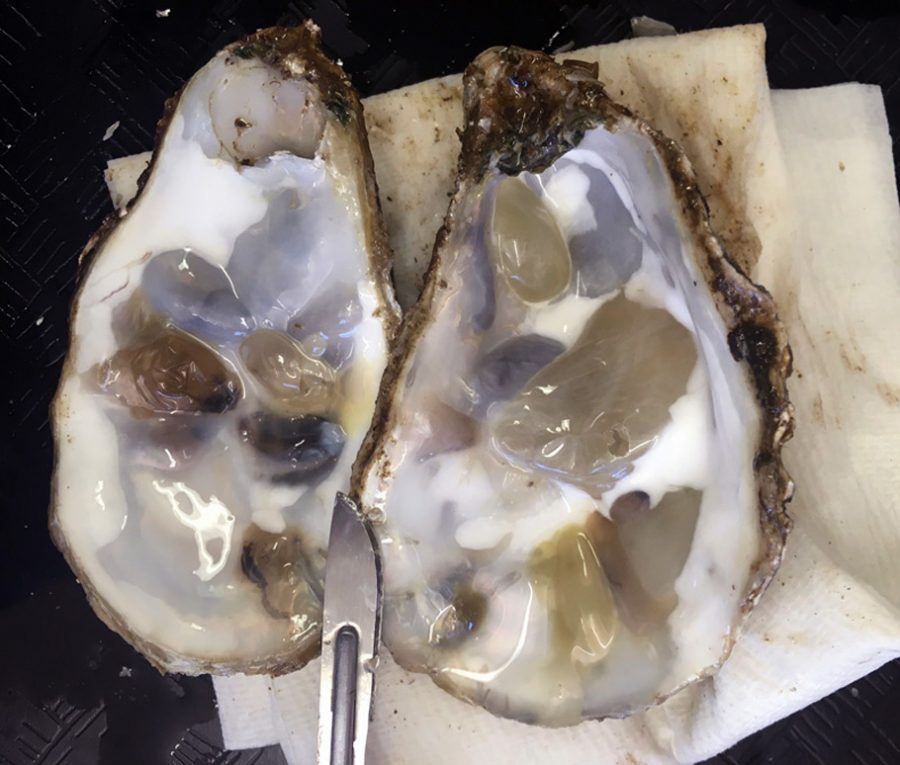 An oyster that is heavily affected by mud worms. Photo courtesy of Chelsea Wood and Julieta Martinelli

From Massachusetts to the Gulf of Mexico, it’s common to find oyster shells in the United States marred by dark blisters and burrows—the scars of shell-boring mud worms. The most commonly recorded is Polydora websteri. Measuring roughly two centimeters, P. websteri makes its home by burrowing into oyster shells and sticking its palps out into the ocean to feed. In response, the oyster secretes a brittle layer of shell between itself and the invader, like an older sibling dividing a shared room. Behind this barrier, the worm continues digging out more space, creating a bubble that gradually fills with its own waste and seafloor sludge. Mud worms don’t typically kill oysters or poison the meat for humans. But they can curb oyster growth—and tank market value.

No one knows where P. websteri originated, but over centuries, it has hitched a ride around the world with the global oyster trade, triggering major infestations that have collapsed half-shell companies in South Africa, Australia, New Zealand, and Hawai‘i. More recently, the parasite has been reported in Oregon, California, and British Columbia. Washington, however, seemed unaffected, a half-shell haven. Today, the majority of the state’s oysters are sold raw, and King knew an invasion of mud worms could upend the market. With no prior scientific reports of the parasites in Washington, however, she couldn’t tell if this was a recent invasion, or if small numbers had been here for centuries and were only now proliferating because of some change in the environment. King decided to call Chelsea Wood, a University of Washington parasite ecologist. 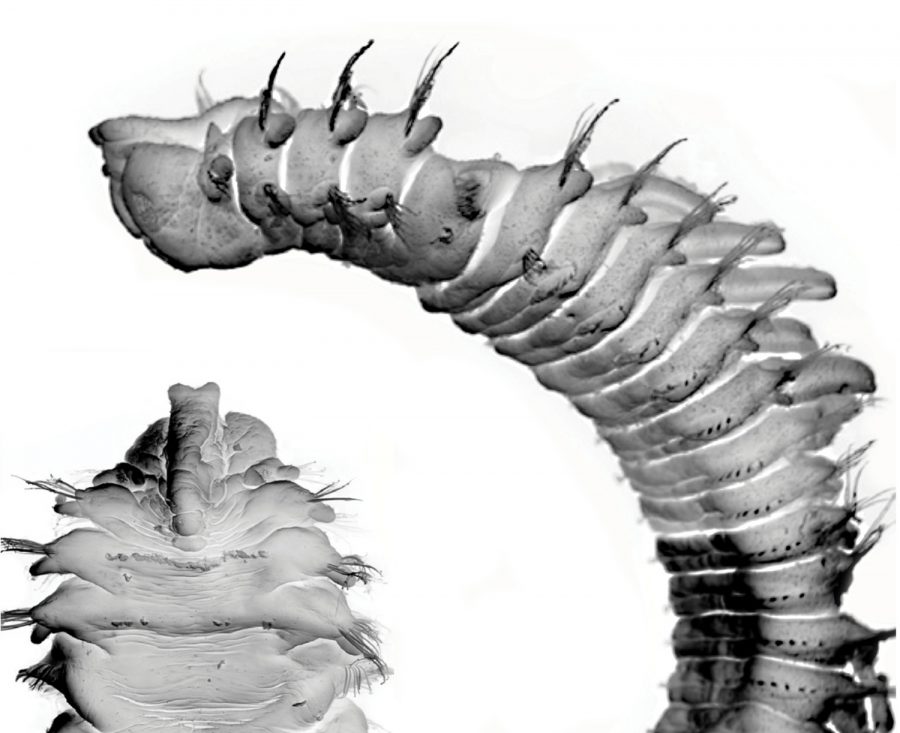 In 2018, King, Wood, and Julieta Martinelli, a postdoctoral researcher in Wood’s lab, began a project to evaluate P. websteri’s past in Washington, using the structure and chemistry of oyster shells as an archive of marine conditions over time. They started by mapping the distribution of modern mud worms along the US West Coast. From California to Alaska, more than 30 oyster growers and tribes offered up shells. With careful tweezer work, the researchers pulled mud worms from 25 percent of the samples. The Washington oysters were no exception: in parts of south Puget Sound, the infestation rate was as high as 53 percent.

But there was one difference. Almost all the worms from the West Coast had DNA that matched P. websteri, which suggests species invasion. In Washington’s Puget Sound, Hood Canal, Samish Bay, and Willapa Bay, however, about three-quarters of the blisters derived from a mystery parasite, one that didn’t align with any other mud worm species on record. At least, not records kept by humans.

In the fall, Martinelli invited me to Wood’s lab to see the blisters for myself. Pulling open the top drawer of a cupboard, she flicked through bags of shells like folders in a file cabinet, squinting through the transparent plastic. “Here, I don’t know if you can see those,” she said, opening a bag and shaking out a shell. “It’s crazy how your eye gets trained.” On the inside rim, I could just make out a black pinprick that Martinelli identified as a mud worm burrow. Grabbing another shell, she showed me the next and more obvious stage of infection, which resembled a small charred blister on a pizza crust. Martinelli couldn’t tell by sight if it was caused by P. websteri or the mystery parasite. But, in some ways, it didn’t matter: either can cause extensive damage.

To track the infestation, Martinelli and her colleagues have made “wanted” signs showing mud worms and their markings, so that oyster growers can contact them if they see any. The posters will hang in shucking rooms up and down the West Coast. Chris Burns, a natural resource technician for the Jamestown S’Klallam Tribe in Washington, told me he had no knowledge of the parasites until Martinelli showed him the blemishes. “They’re present, but they aren’t really a problem at this time,” he said. “Not that they couldn’t become one.” While the tribe’s beach in Sequim Bay has relatively low rates of infestation, in other areas, the blisters are a bigger problem.

Martinelli suspects these hotspots feature environmental conditions that suit the parasite best. She is now comparing shorelines to see whether factors like farm density, ocean temperature, or tidal heights can explain the recent uptick. But it’s hard to draw conclusions without a historical reference point. Martinelli needed to compare modern conditions to those of the past.

Fortunately, ancient oyster shells are unrivaled archives. Not only can shellfish preserve traces of shell-boring parasites for more than half a billion years, they also faithfully record changes in the marine environment. When an oyster grows, it pulls dissolved calcium and bicarbonate from the water to create a calcite shell. This process forms periodic growth lines from the inside out that retain chronological records of water temperature, acidity, salinity, and turbidity, much the way tree rings register weather history. By grinding down and chemically analyzing oyster shells from different times, it’s possible to track an ecosystem’s changing conditions, revealing rising pollution, warming waters, escalating acidification or species invasion—all of which could help explain when mud worms arrived in Washington and why they are suddenly thriving.

But in a tsunami-prone region like coastal Washington, oyster shells are easily washed away. For months in 2019, Martinelli searched the shore for ancient samples to no avail. After hearing of her struggles, the Jamestown S’Klallam Tribe offered her a collection of 1,000-year-old shells from a cooking pit near their shore.

Today, most of the oysters on Washington’s beaches are invasive, introduced from Japan a little more than a century ago. Populations of the sole native oyster, the Olympia, have plummeted by more than 95 percent, due to overharvesting and pollution. Now, however, several tribes are trying to revive Olympia oysters to restore the foundation of their shorelines. Burns, who leads the Jamestown S’Klallam Tribe’s restoration project, hopes Martinelli’s research can provide restoration targets for the tribe. The ancient shells, for instance, could reveal what Sequim Bay’s water quality was like before a 19th-century mill yard smothered its native oysters with floating logs and sinking bark. 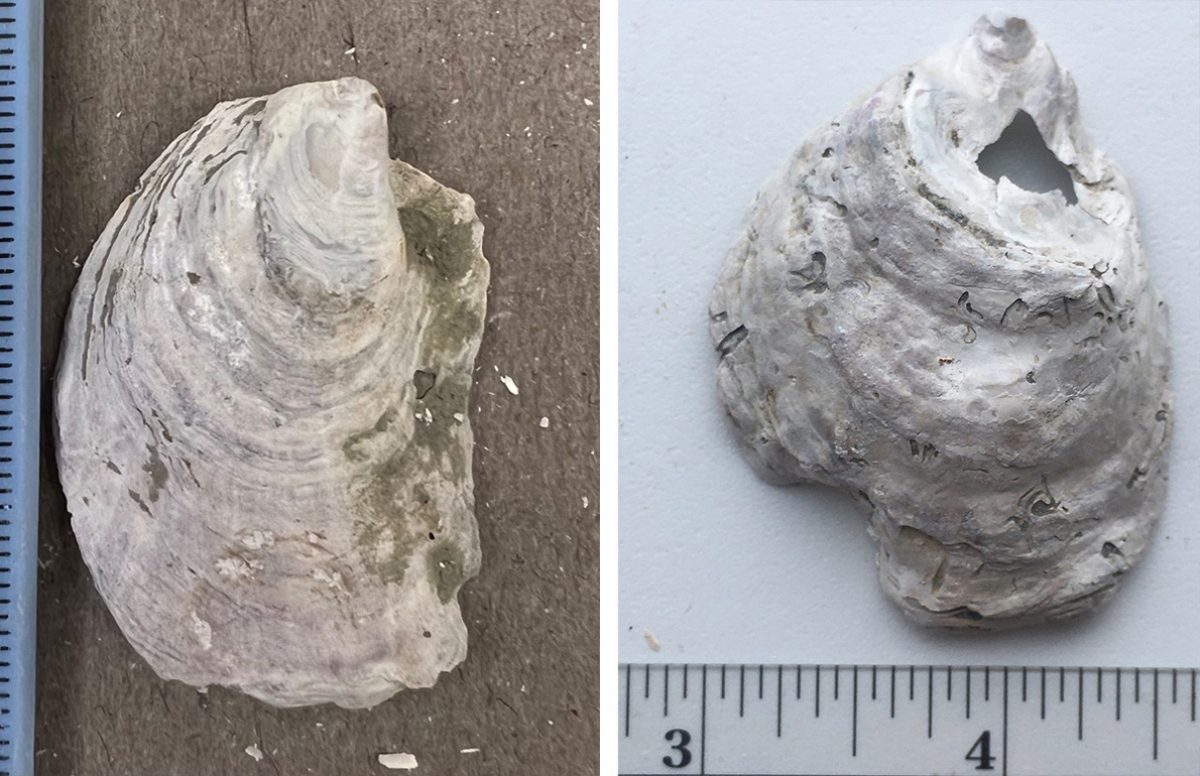 Martinelli found only one other collection of ancient oysters. One day, a local geologist tipped her off about a slice of uplifted shore near Hood Canal. Guided by a map and GPS coordinates, Martinelli lugged 10 buckets into Theler Wetlands Belfair Nature Preserve. After winding along a series of floating boardwalks, she jumped down into a small stream. Trudging through the shallows, she noticed something shiny in the muddy banks. With the tip of her boot, she uncovered a layer of oyster shells, polished by 1,000 years of erosion. Back in the lab, Martinelli began preparing the shells for chemical analysis to determine what Olympia habitat once looked like. That’s when she noticed some dark marks around the shell’s rims. To the naked eye, they looked exactly like the burrows on modern oysters.

Historically, parasites have been considered a drain on ecosystems. But recent research suggests they are in fact important managers of natural communities, keeping food webs, biodiversity, and keystone species, including oysters, in balance. Parasitism is arguably the most common lifestyle on Earth. Yet scientists estimate that up to 95 percent of parasitic worms remain undescribed.

Calling the new mud worm in Washington a mystery is, therefore, a bit misleading: all mud worms are mysteries. “We have almost no information about what happened with wildlife disease in the past,” Wood told me. “Almost none.” Martinelli and Wood don’t yet know whether the mystery worm is responsible for the burrows on ancient Olympias. To figure that out, they intend to scan ancient and modern oyster burrows and compare their features. If the mystery worm really has been in the region for millennia, then the next question is, Why have we only just noticed?

It’s unclear how Washington’s oysters will fare if mud worms continue to proliferate. Even if the mystery worm turns out to be native, the habitat in which it evolved has been altered by centuries of human influence. Clumps of invasive oysters are now concentrated on Washington’s shores, where ocean acidification might be weakening their shells. The archive they create in the coming decades may chronicle an entirely new chapter for Washington’s shorelines—and its oysters.