The story of Seal Woman, a Selkie, comes from the Faroe Islands, an archipelago that is part of the Kingdom of Denmark. Artist Edward Fuglø designed a series of 10 stamps, four of which are shown here. Background photo by Olaf Krüger/imagebroker/Corbis

Let’s start with the moral of this story: never piss off a seal woman. Ever.

Seal people—Selkies—are seal-human hybrids in the folklore of Irish, Scottish, Icelandic, and Faroese cultures. These mythological creatures live in the water as seals and, in some stories, come ashore once a year to human it up for a day. They flop out of the water and slip out of their fur, revealing their white, gleaming skin. And they dance. (Flamenco. Rumba. Disco. No one really knows what they dance, just that they’ve got feet for a day and they want to boogie.)

This series of stamps from Denmark’s Faroe Islands celebrates one Selkie myth called “The Seal Wife.” In this story, as the Selkies groove, a human fisherman steals the cast-off fur of a hauntingly beautiful young seal woman.

With her fur suit gone, the Selkie’s “friends” leave her behind on the beach as they grab their furry swimming togs and dash back to the water. The fisherman imprisons the lovely young Selkie as his “domestic servant”—otherwise known as his wife—where she spends her days as head laundress, bottle washer, cook, and perhaps even caterer to help make ends meet. (She has seven children, too.)

Through it all, Seal Woman is ever watchful, waiting for an opportunity to reclaim her fur suit from a locked trunk. One day, her husband goes fishing and leaves the key behind. It’s all the time Seal Woman needs to reclaim her fur. She slips it on—yay, after seven kids it still fits!—and dashes for the beach. She splashes into the water and swims out to meet her one true seal-man love, who has waited for her all this time. (There is, however, a giant hole in this story: was he at the dance party? If so, why didn’t he fight for her, or her suit?)

Long story short: Seal Woman and Seal Man produce two seal boys; Seal Woman’s jilted fisherman husband kills seal dad and pups; Seal Woman is mad as hell and is not going to take it anymore—she vows to drag Faroese fishermen to a watery grave, until so many fishermen drown that there are enough dead to circle the islands holding hands. Which means, if the Faroe Islands have 1,117 kilometers of coastline, Seal Woman will not rest until at least 613,736 fishermen have died.

Never piss off a seal woman. Ever. 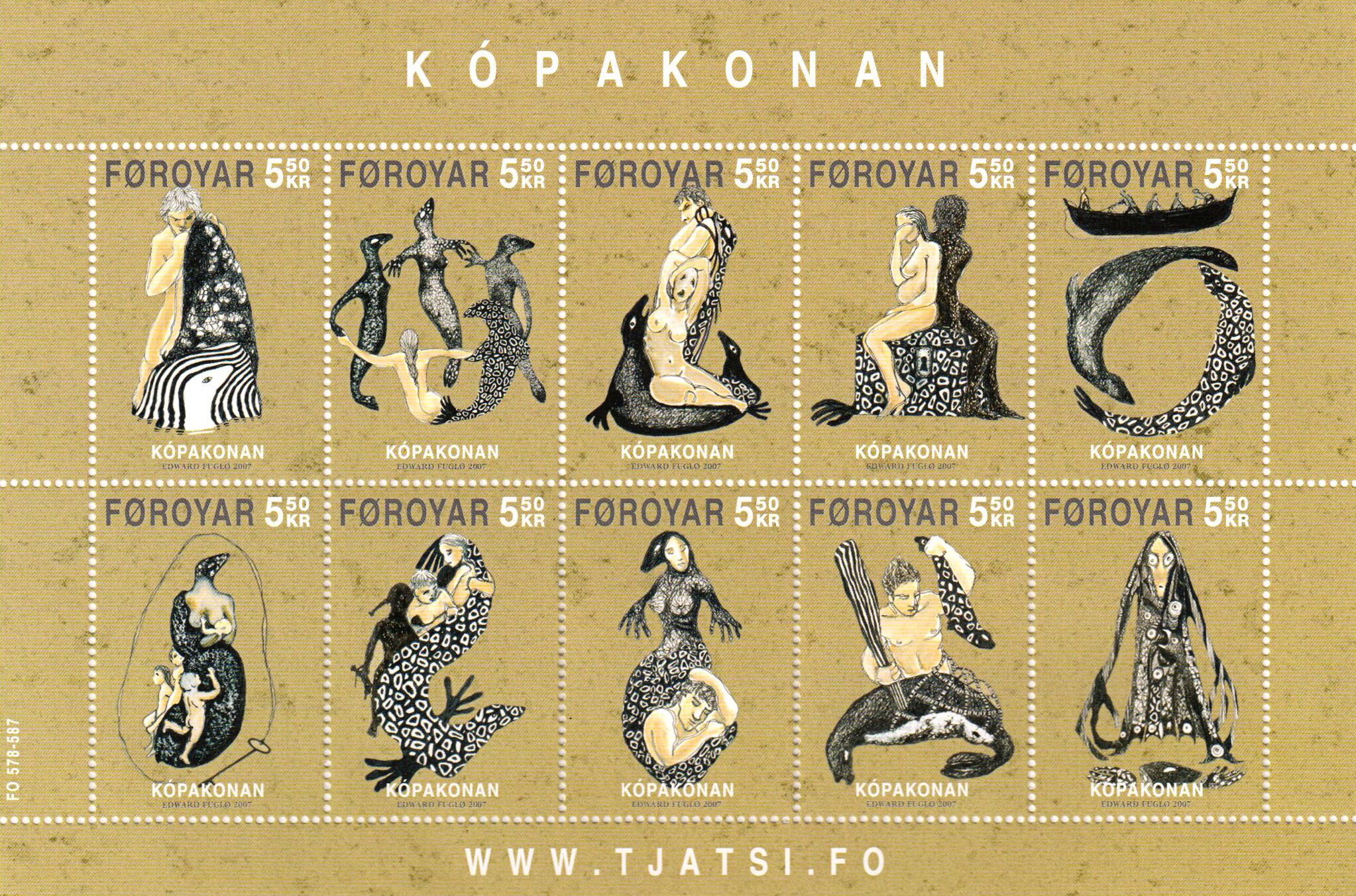 Selkie myths are part of Faroese, Scottish, Icelandic, and Irish cultures. This series of Faroe Island stamps, designed by artist Edward Fuglø, was issued in 2007.