To clean an artistic masterpiece, museum conservators might dust it delicately with a soft goat-hair brush, dab on carefully formulated organic solvents, or target pockets of grime with quick pulses from lasers. When the masterpiece is a 26-meter-long skeleton of a blue whale, industrial vacuums, scissor lifts, and a dash of solvent do the trick.

Most of that grunge-busting work is done by the time I join skeleton articulator Mike DeRoos at the University of British Columbia’s Beaty Biodiversity Museum in Vancouver, where he’s completing the blue whale skeleton’s first cleaning and checkup since it was installed as the star attraction five years ago. DeRoos and his wife, Michi Main, with help from curatorial assistant Chris Stinson—an easy match for Seth Rogen’s smarter, sober sibling—spent the past two days hoovering cobwebs and a thick blanket of dust from the bones and then filling minor fractures. All that’s really left to do now is to disguise the repairs and other blemishes.

The whale, officially catalogued in this natural history museum’s massive archive as MO 17,999, and sometimes called Big Blue, is just as much an art project as a scientific specimen. 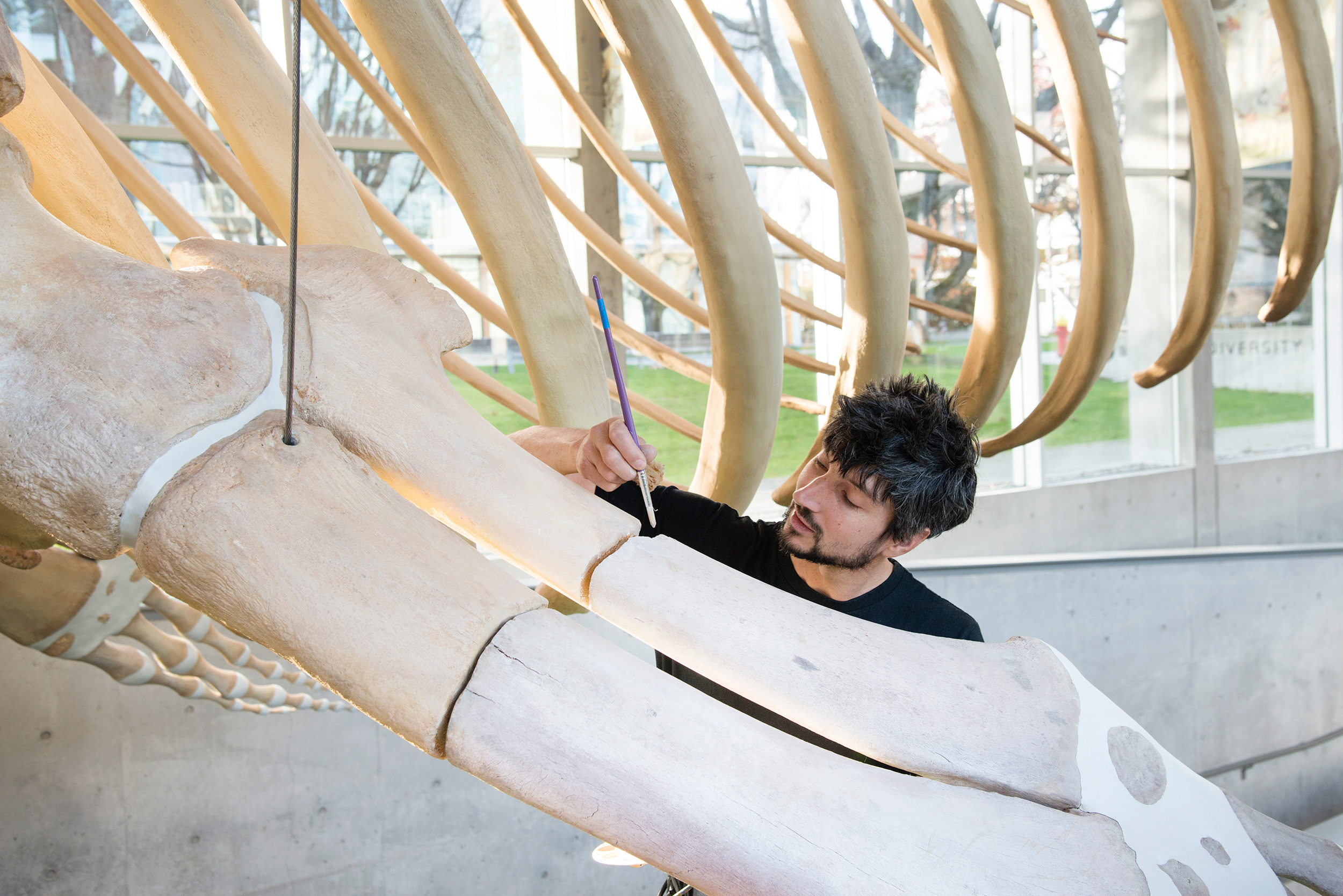 Mike DeRoos touches up a spot on the blue whale skeleton’s flipper. Photo by Shanna Baker

When DeRoos and a team resurrected the whale in 2008 from a beach on eastern Canada’s Prince Edward Island, where it had been preserved in its red clay grave for 20 years, and stripped away the putrid flesh, they discovered that the skull of the behemoth female had been crushed—likely during a fatal blow from a ship. It wasn’t the only injustice. They also discovered that someone had sawed off a 3.7-meter-long flipper. A local returned the bones of the missing limb, minus a lot of the smaller pieces that must have been absconded by critters or swallowed by the forest where it lay. And then, while DeRoos and his helpers tried to expunge some of the bones of oil in a heated enzyme bath at a warehouse in Victoria, on the West Coast, they began to disintegrate like soggy cardboard. The skull had to be re-created, as did the massive rib bones, which were too heavy to hang. Almost every surviving original bone also needed repair. DeRoos, Main, and artist Joanne Thomson of Victoria spent months painting the patches and replica pieces to blend in.

DeRoos, slim and soft-spoken with the calm demeanor of an urban deer, stands beside the whale and points out the repairs. “She’s holding up really well,” he concludes. Up here, at ground level, surrounded by windows, the blue whale gleams.

Thomson breezes in, holding a brown bag of mystery vertebrae from Mexico for Stinson to identify (likely porpoise or dolphin). “Oh, she looks so pretty,” she exhales, face upturned. 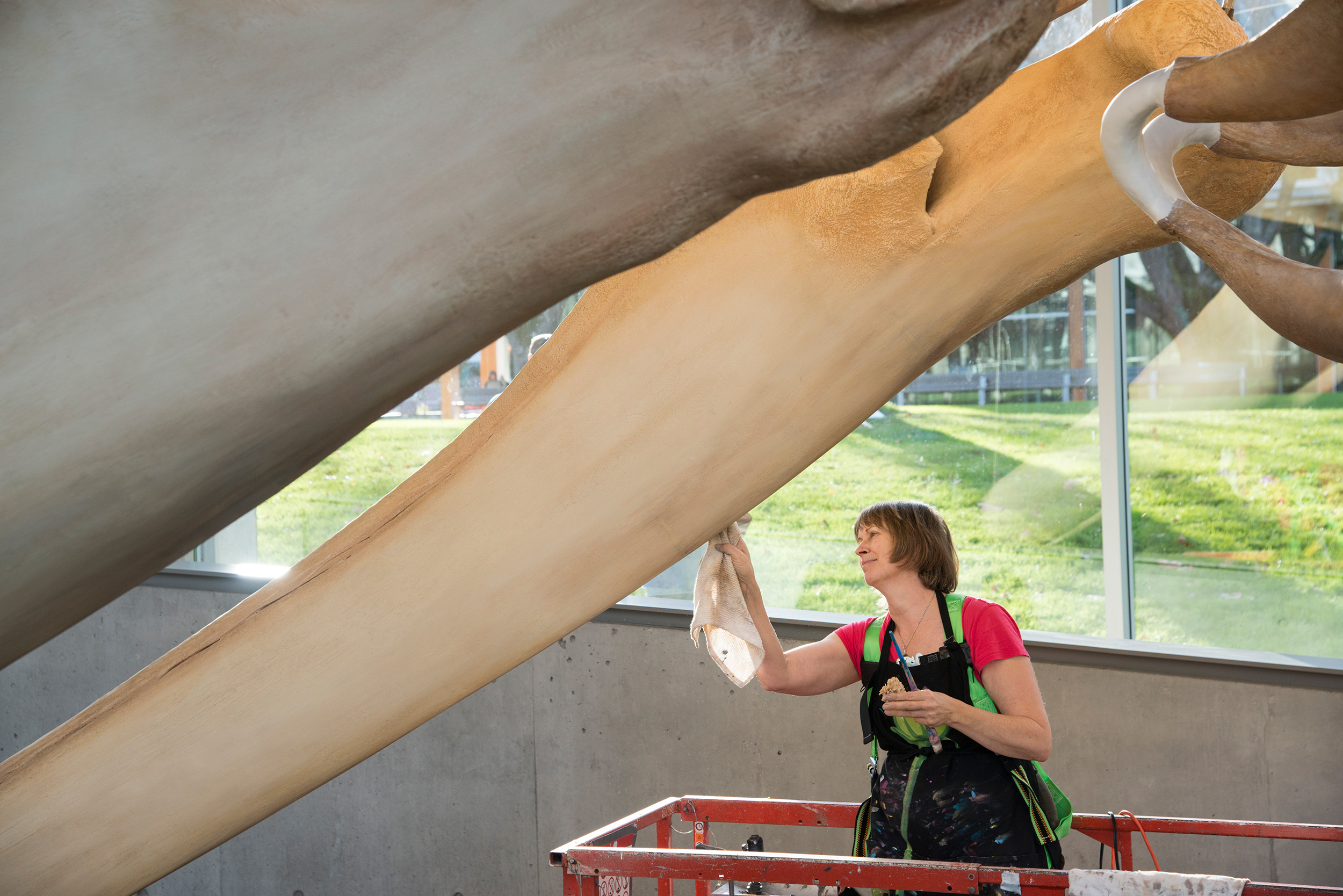 Artist Joanne Thomson of Victoria blends a layer of archival paint on the skeleton’s jawbone. Photo by Shanna Baker

The whale hangs by steel cables, suspended above a basement-level atrium. Visitors can first admire it at eye level as they enter the museum and then descend a switchback ramp to stand below and take in the skeleton’s full breadth. It invokes the type of hushed reverence that some might reserve for gazing up at the Michelangelos in the Sistine Chapel. DeRoos designed hidden internal armature for the bones and positioned Big Blue in a dynamic lunging position with her jaw wide open, tail undulating, and front flippers streaming back. “A skeleton is more aesthetically pleasing if it’s scientifically exact,” he says, “If I miss some of the details and they, for instance, have ribs misaligned or a limb doing something it shouldn’t be doing, the skeleton doesn’t look right.”

Like all masterpieces, there’s nuance in the details—a story in the bones. Often a skeleton will have broken toes or ribs, DeRoos explains, and it’s clear the animal limped along with the injury for a long time. “I find that really interesting, seeing the whole story about how it lived its life, whether it was in pain.” Sometime during Big Blue’s life, she broke a rib or had a localized infection—the bone swells there into a burl. As I scrutinize the whale, I also realize that it has an extra rib on the right side.

“Yeah, we were somewhat confused by that,” says DeRoos. They searched the excavation site at length, but could find no evidence of another rib. Turns out, it’s not uncommon for whales to have an unpaired rib. 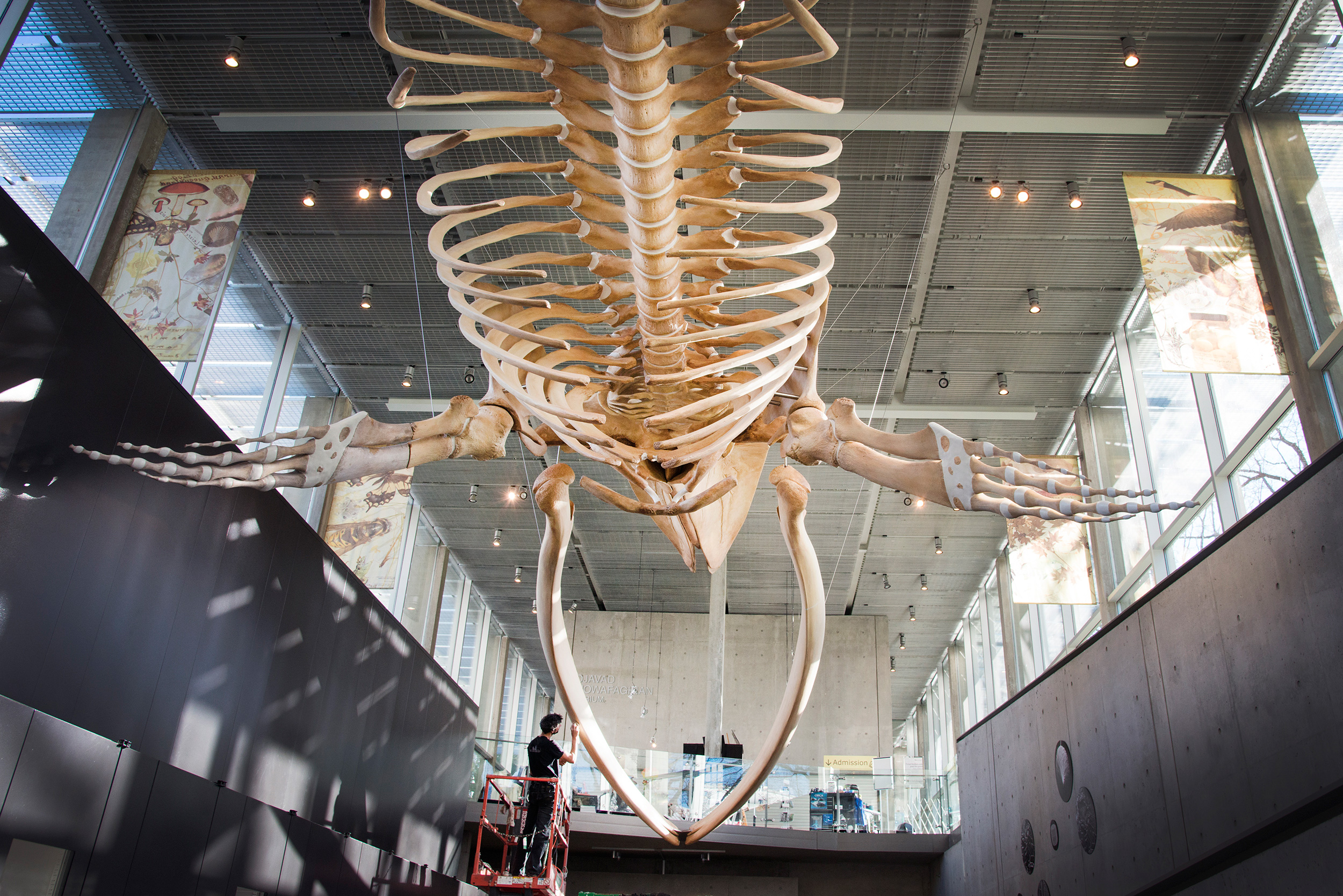 Mike DeRoos examines the blue whale skeleton that he helped liberate from a beach on Prince Edward Island. Photo by Shanna Baker

I slip on a safety harness and gather my things before climbing onto a scissor lift with DeRoos. “Uh oh, she’s got her camera,” Stinson quips. “You’d better fix your hair, Mike.”

“But then he wouldn’t be Mike,” Thomson replies.

DeRoos smiles sheepishly and touches his dark hair, accented with silver strands. It’s molded into a spectacular rooster comb of bed head on this holiday morning. But he makes no attempt to tame it.

Up in the lift, I’m encased by the whale’s rib cage as DeRoos dabs cleaning solution on the back of its throat. The plaster resin of the skull exudes a sticky substance that attracts dust and has a slight sheen. Ammonia didn’t work to remove it, so now he’s trying vinegar followed by a dab of matte varnish. The museum is closed today, but passersby gather at the windows to watch the work. When DeRoos’s family arrives for lunch, his two daughters, ages five and seven, quickly slip off their boots and scamper down the long rows of cabinets in the dark bunker that extends from the atrium, housing the museum’s 2.1 million other specimens.

Beside us, Thomson has her lift raised between the massive jaws, brushing “Titan Buff” and other bony shades onto the lower-right jawbone and then swiping them with a rag. The trick to natural-looking bone, she explains, is many thin layers. Inside the cavernous mouth, Thomson doesn’t look like she’d be much of a meal for the whale. Blue whales prefer krill anyway—giant gulps of it that can amount to 3.6 tonnes a day. They have formidable appetites for a reason—they’re the largest animals ever to live. The giants were hard hit during the commercial whaling era and remain very rare in Canadian waters, numbering fewer than 250. 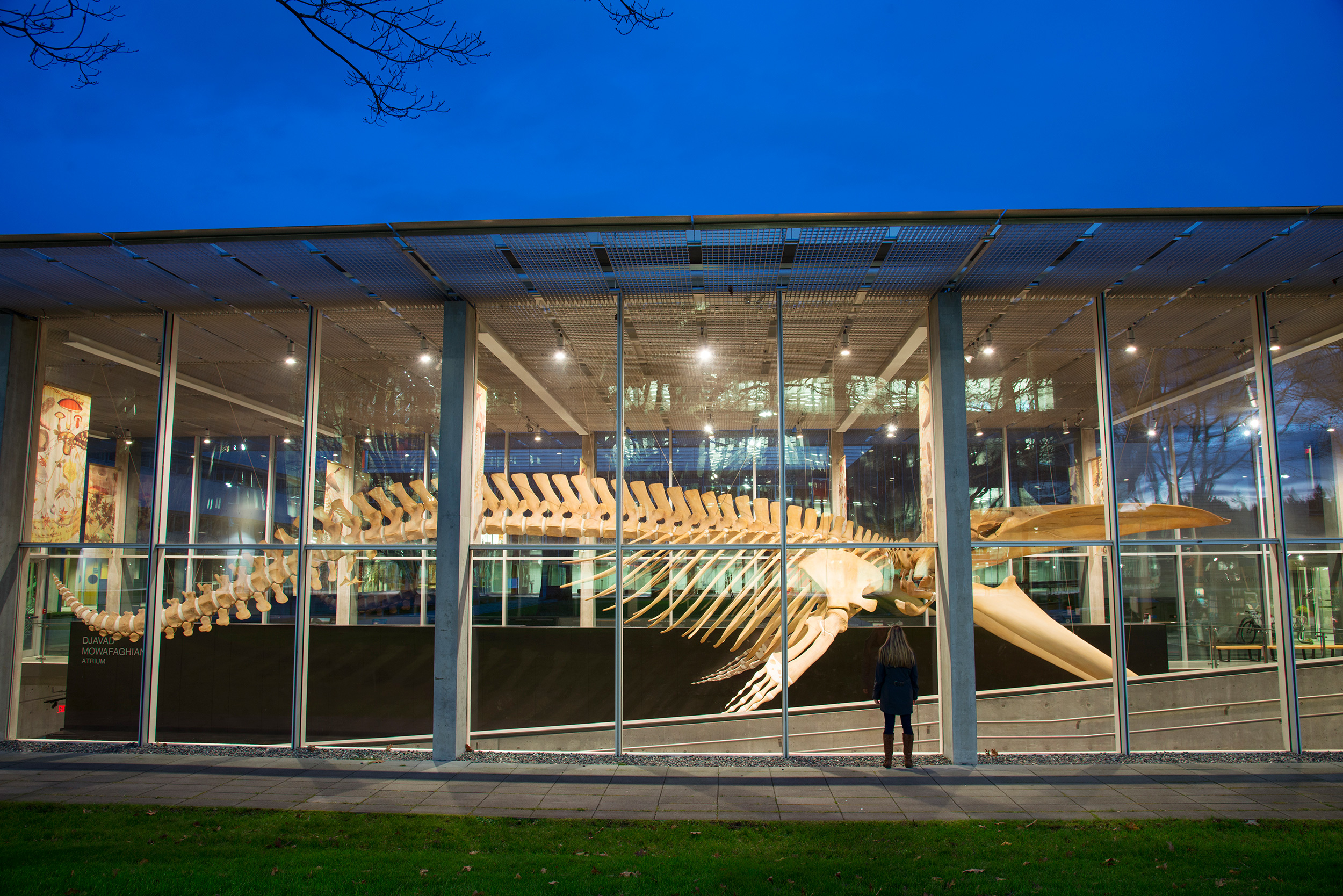 The blue whale skeleton is an arresting sight along the University of British Columbia’s Main Mall. Photo by Shanna Baker

DeRoos is a rare species himself. Most biologists learn to tease apart their subjects rather than put them back together. But a predilection for puzzles, a background in construction, a love of nature fostered by a physician grandfather, a biology degree, and a strong stomach coalesce into a unique skill set that makes him perfect for skeleton articulation. “You can take [an animal] apart and learn stuff about it, but that’s a one-time thing,” he says. “I want to enable that animal to continue to tell its story.” He works with Main, also a biologist (who earlier in the week scooped a raccoon in rigor mortis off the road to use in her educational presentations), but there are few other professional skeleton articulators in North America. DeRoos has no mentors, no manuals, no industry conferences to attend. He learns as he goes. The blue whale was his biggest project; soon he’ll start on a killer whale for the Noyo Center for Marine Science in California, and in the fall will help reassemble the 125-year-old skeleton of a blue whale at the Natural History Museum in London, bringing his tally of articulations up to 17.

As awe-inspiring as it is, the blue whale skeleton is, of course, merely an abstraction of a whale, a souvenir of a species in danger. But, DeRoos argues, bones are a more authentic representation of an animal than a sculpture or painting, for example. He sees himself as a facilitator—bring the remains of an animal to the public’s reach, and those bones can inspire people to learn more, to get excited about nature, and to want to conserve it. “I’m proud of how I … transformed this thing from a broken stinky mess into this,” he gestures at the whale, “which you can stand next to and gain a better appreciation of as an animal.”

If Big Blue’s bones are well maintained, Stinson expects they could last another 200 years. Her story will go on, long after the rest of us in the room are gone.