As sea level rise threatens the Wadden Sea coast, one German scientist argues it’s time for his country to rethink its dikes. Photo by Alex MacLean

On the shores of Sylt, a German resort island and former Nazi base, one renegade biologist has taken a stand against conventional German engineering.

Karsten Reise, tall and slender with a trim white beard, gestures to a low dike constructed of sand and sealed in black asphalt. If he had his way, he might drive a hole right through the wall and watch with satisfaction as the seawater surged back in to nourish a desiccated and sunken landscape.

Only partly in jest, Reise dismisses Germany’s coastal protection authorities as the “dike mafia,” relating the contingent’s secretive and unyielding mentality to that of an organized crime ring. To Reise, emeritus director of the Wadden Sea Station of the Alfred Wegener Institute for Polar and Marine Research, these resolute embankment builders—intent on constructing dikes ever taller and stronger in the face of impending sea-level rise—have it all wrong. Most of the country’s sea walls are relics that need to be re-engineered, he says. In his mind, Germany should welcome the tides, controlling their pulses with strategic sluices, rather than insisting on shielding the coast with a vast wall of impermeable armor. 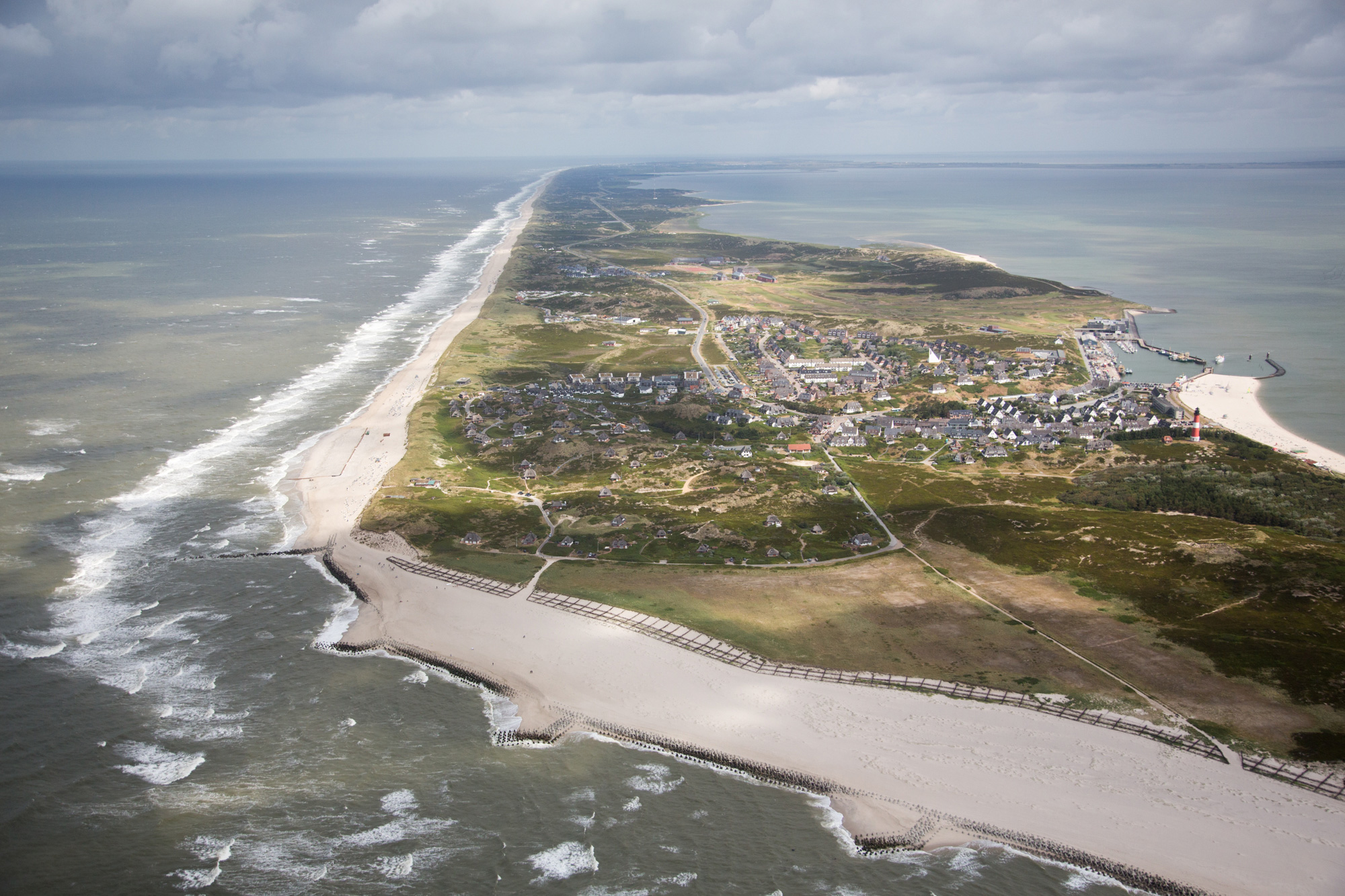 Karsten Reise developed his connection to the Wadden Sea during childhood visits to Sylt, a barrier island. Photo by Alex MacLean

Reise, who practiced voicing his opposition as an anti-nuclear activist in his student days, is one of his country’s most outspoken critics of dike protection. With the ardor of a true believer, he preaches that the seas will continue to rise, perhaps as much as nine meters. One model even suggests that within 10,000 years, the water may be as high as 50 meters above present levels. He acknowledges that nobody can predict how quickly this catastrophe will unfold. But building 50-meter-high dikes is unrealistic. And not planning an alternative is folly, he says. “We have to grow with the sea.”

The Wadden Sea is a vast mosaic of mudflats, sandbars, mussel beds, and salt marshes that fringes the southeast coast of the North Sea. Designated a UNESCO World Heritage Site, the Wadden Sea stretches from southern Denmark, along Germany, all the way to the Netherlands, and encompasses the globe’s largest unbroken intertidal habitat. Thousands of species of fish, shellfish, marine mammals, migratory birds, and other flora and fauna thrive here.

Reise points to a flock of birds on its way north from Africa. A “spectacular sight,” he says, scanning the horizon. Without this feeding ground, the birds would never reach their breeding site in the Arctic. Yet, if Germany sticks inflexibly to its dike-building policies, the tidal flats that the birds depend on will gradually disappear under water. 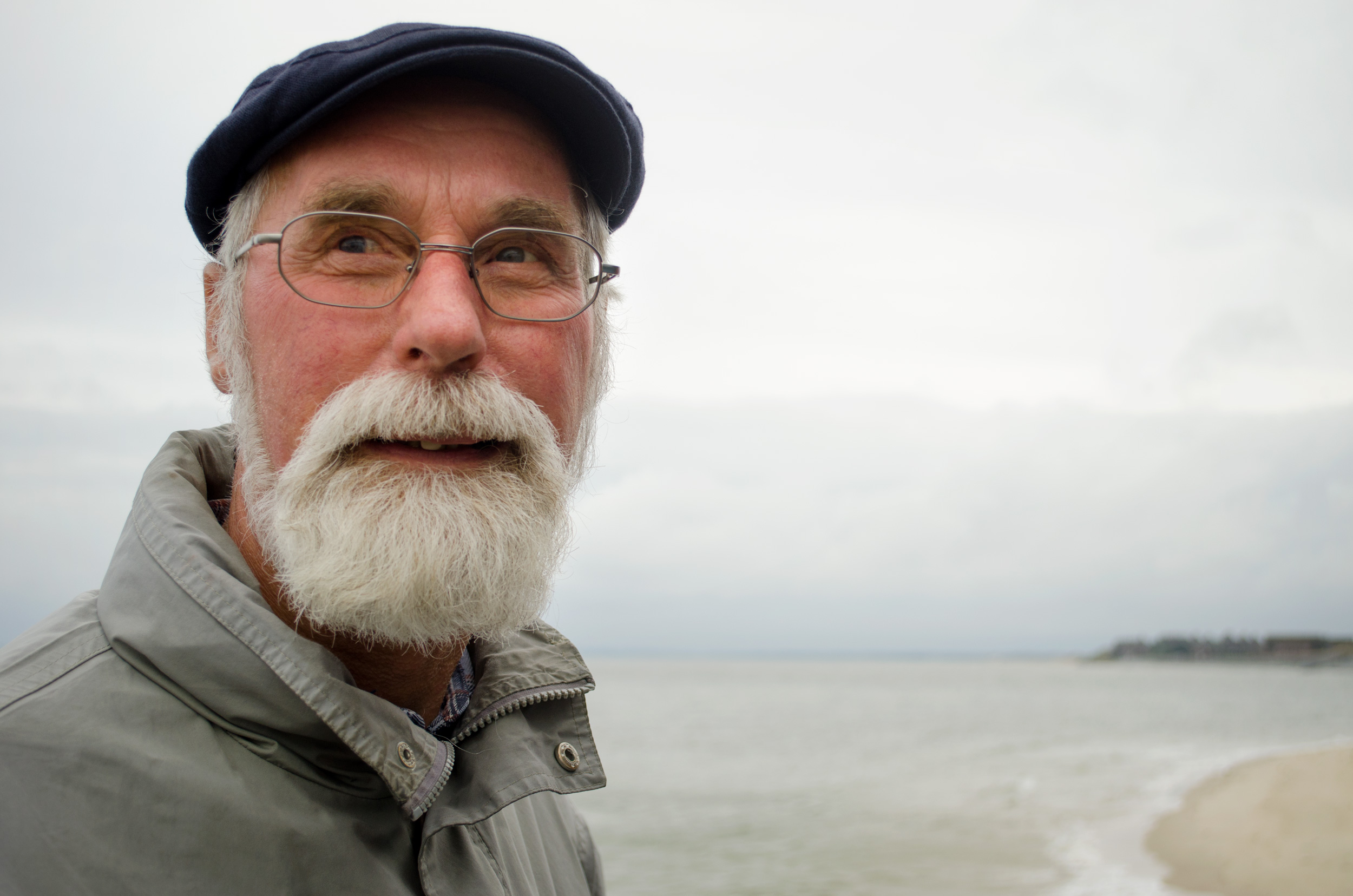 Karsten Reise concedes that his views are not likely to affect significant change during his lifetime, but is confident that they’ll be adopted eventually. Photo by Daniel Grossman

Reise first experienced the charms of Sylt and the Wadden Sea as a boy during family trips. The scientist now lives here full time. He spent his professional career studying the rich habitat and benthic life of the shallows. Since retiring a few years ago, he has devoted himself to developing new ideas for protecting the coastline he holds so dear.

Reise, half tongue-in-cheek, explains the different attitudes between the nations that skirt the Wadden Sea. The laid-back Danes, he says, figure they have a long coastline and can stand to lose some land. Few dikes mar their coast. The industrious Dutch, on the other hand, tinker with their coast, dumping sand here, letting water in there, finding ways to adapt. In contrast, the rigid Germans declare, “We will prohibit sea level rise.”

Antje Stokman, a landscape architect with the University of Stuttgart, agrees. With some exceptions, Germans generally aren’t innovative, she says. “We’d rather say what doesn’t work than what works.” Cultural differences in coastline attitudes between countries might partly be an accident of geopolitical history: sea level rise threatens only a sliver of Germany, making it a low priority for most of the country. In contrast, more than a quarter of the Netherlands, a much smaller country, is below sea level and shielded by dikes. The Dutch don’t have the luxury of German complacency, says Stokman, so they look for other solutions.

Dike raising runs deep in the psyche along the Wadden Sea. When settlers moved into the region 6,000 years ago, their homes, grain fields, and livestock pastures were flooded regularly. They began constructing hillocks to place their homes on, a practice that took off in earnest after a few millennia. Eventually, roughly 500 to 1,000 years ago, they started enclosing their properties with earthen sea walls instead. Before long, the walls were so numerous that they fortified the coast with an unbroken bulwark against the sea. The legacy is a nearly continuous ribbon of dikes from Belgium to Denmark. 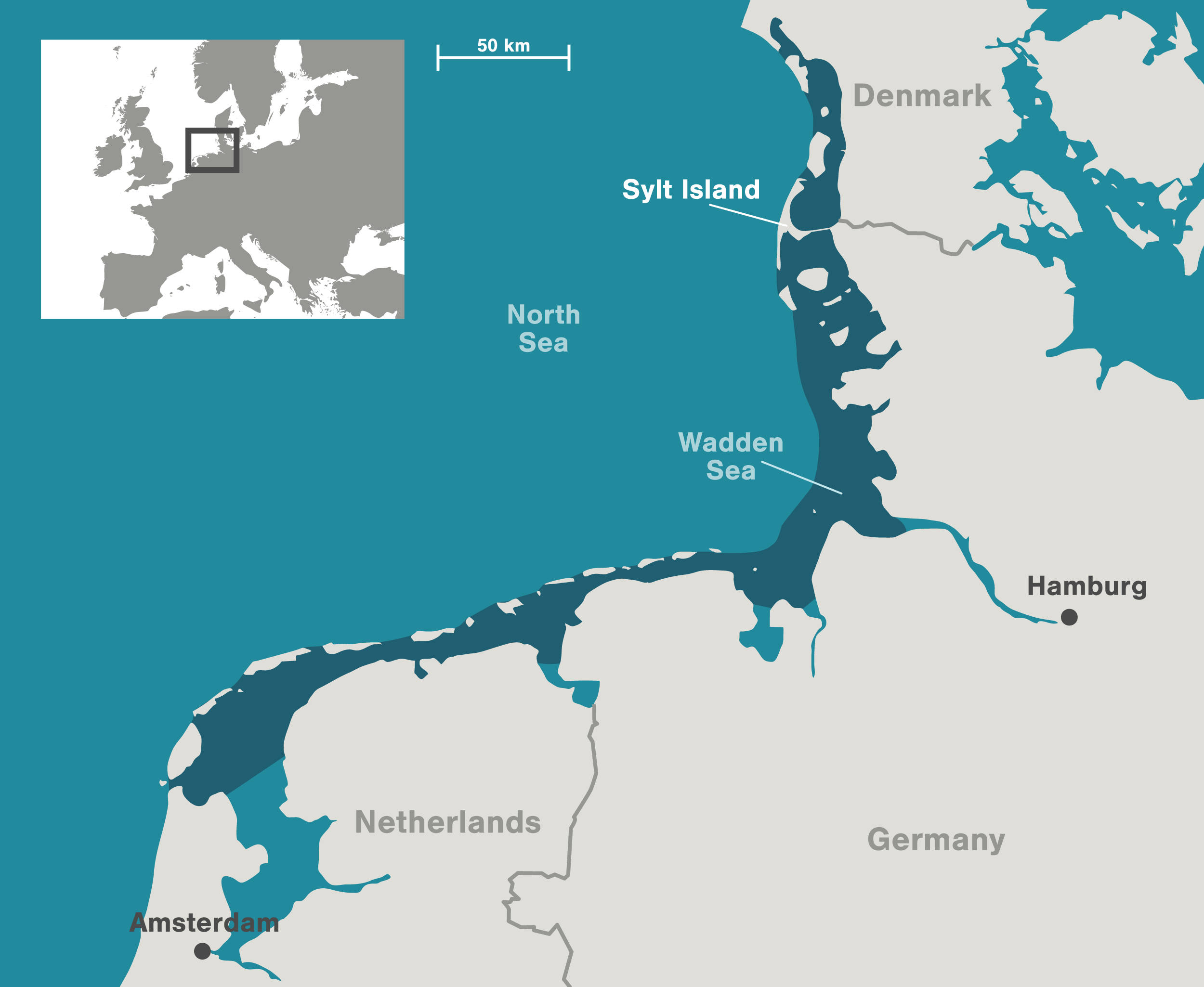 The ocean had once been a valuable source of nutrients when it inundated their land. But after the walls were established, and the practice of building homes on top of mounds was abandoned, people began to see the ocean as the enemy, says Reise. It threatened to breach their dikes and drown the settlements crouched behind them. “They were very proud of becoming more and more successful in overtaking the North Sea.”

Though modern Germans have ceased to fear the Wadden Sea, alarm about the impacts of climate change is growing. Which is why, in Reise’s mind, it’s high time to rethink dikes. Aside from the fact that Germany’s entire dike system will be too low to contend with sea level rise within a matter of decades, coastal armor is expensive to build and maintain. Dikes obscure horizons. They interfere with the mixing of fresh and salt water. They even—ironically—magnify the potential consequence of storm floods. When people barricade the water, they also cut off the land’s primary supply of fresh sediment, so it can’t grow with the rising seas. Behind the walls, protected land also gradually compacts, a process accelerated by people draining it for agriculture or construction. In some places behind Germany’s dikes, land is three and a half meters below average sea level. If a wave happens to breach a dike, it will quickly swamp anything or anyone living in such deep hollows. 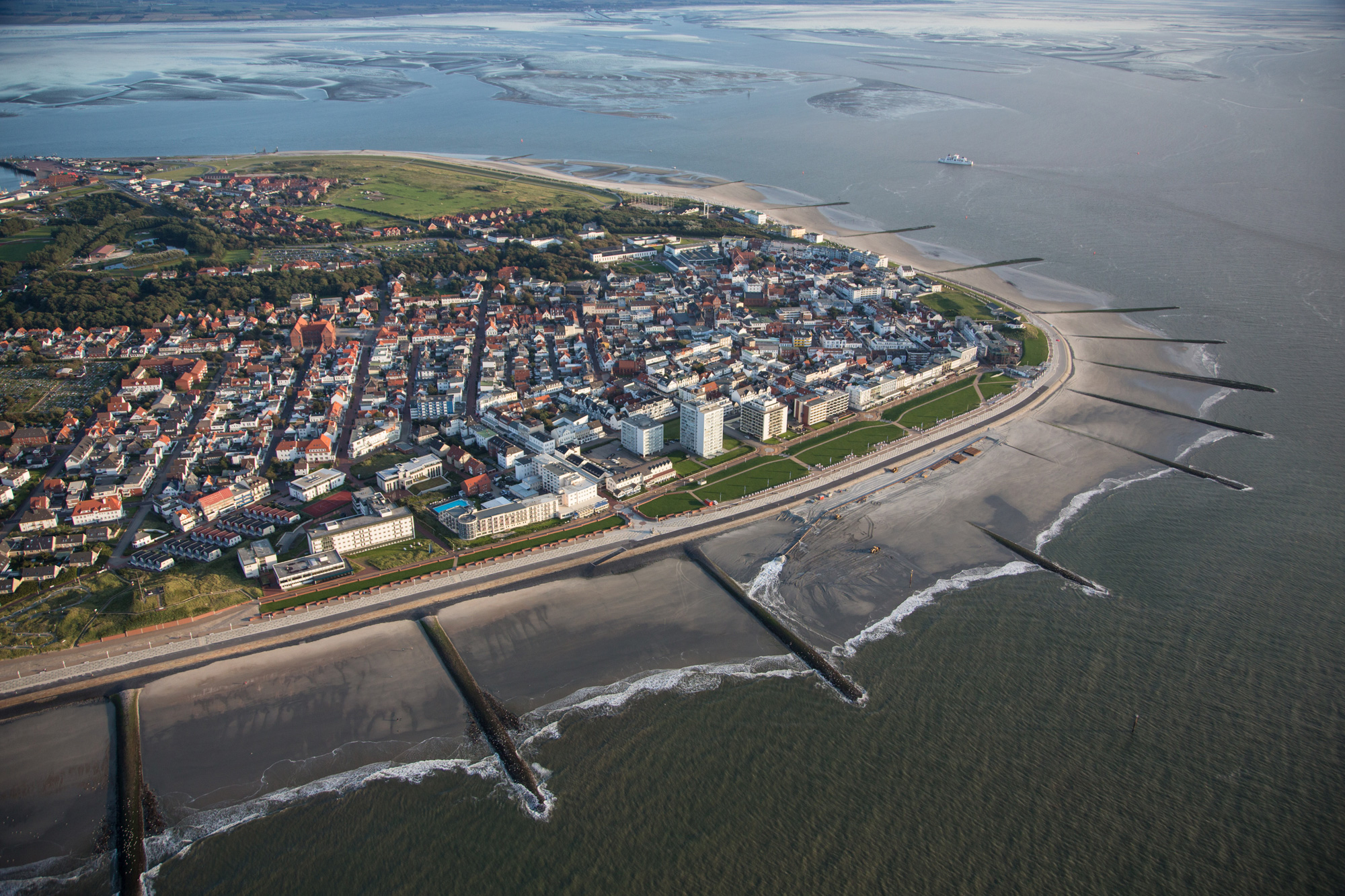 Some dike protection will still be imperative in the future, Reise acknowledges, especially in areas of high population, and primarily to protect against storm surges. But adopting innovative Dutch ideas, such as strategically opening chinks in the shoreline’s armor, would help rebuild the coast’s sunken ground. Farmers would lose acreage, but could find other ways to benefit from the marshland. They could turn to aquaculture, for example—raising mussels, oysters, shrimp, and algae—or create recreational attractions, like floating hotels. Houses could be waterproofed at ground level, replaced with buildings on floats, or equipped with hydraulic jacks to raise them when necessary. As dry farmland reverts to damp marsh, it would also compensate for the loss of wetlands from sea-level rise and might provide new territory for wildlife.

Reise touts these suggestions during dozens of public presentations and television appearances each year, and further details them in a book he recently published. He’s also planning to create a curriculum for high schools. The next generations have the most to lose from the short-term perspective of current policies, he says. “They are the ones who have to get the message.”

His ideas have their detractors. In a phone interview, Frank Thorenz, head of the Water Management, Coastal Defence and Nature Conservation Agency of the German state of Lower Saxony, calls many of Reise’s proposals hopelessly impractical. Allowing tides to flow behind coastal dikes would be prohibitively expensive, he says; it takes management—simply opening the floodgates is not an option. “That costs so much money and at the moment society is not willing to spend it.”

Yet, to Reise, it’s irresponsible to never think beyond stopgap solutions. There’s no question the coast will transform with sea level rise. The implicit question he asks his fellow citizens now is: at what cost do we stubbornly adhere to tradition?

Reporting for this story was supported by the Pulitzer Center on Crisis Reporting.