Children enjoy a display at the Ucluelet Aquarium. Photo by Gord More

At the Ucluelet Aquarium, one of the biggest events of the year is the day the staff say goodbye to their charges.

The facility, perched on the waterfront of a small town on the west coast of Vancouver Island, British Columbia, has a catch-and-release philosophy. Each spring, divers descend into local waters to collect animals by hand. The giant Pacific octopuses, shiner perch, tiger rockfish, sea stars, and other species they gather are displayed throughout the summer and fall. At the end of November, the animals return to their wild homes.

“The vision was that they would fulfill their biological destiny—go back to the wild and reproduce—to maintain a healthy wild population,” says Laura Griffith-Cochrane, curator for the Ucluelet Aquarium, which was founded in 2004. The aquarium displays around 500 to 1,000 individual animals at a time. It has a mission to educate the community about species found in its own backyard, with a special focus on displaying the species people eat, including young salmon (released midway through the season so that they can migrate), as well as black rockfish and sometimes halibut. “Very few people actually see these animals alive and see how complex their life history is,” says Griffith-Cochrane.

But for most aquariums—especially larger institutions that display exotic fish and invertebrates—animals arrive on a one-way ticket to captivity, part of a worldwide animal trade that has serious supply problems and a troubling lack of transparency. The Ucluelet Aquarium knows the provenance of each animal it displays since they’re locals, most captured within a 10-kilometer range: a very different model from most aquariums. 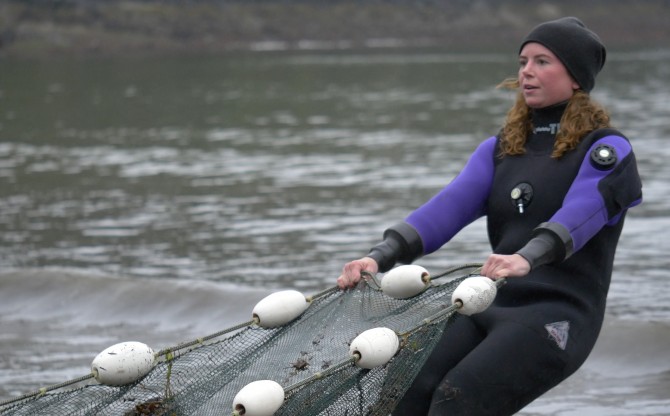 Laura Griffith-Cochrane of the Ucluelet Aquarium using a siene net to catch specimens during their spring catch. Photo by Gord More

“[Public aquariums] are acquiring animals for display from a trade that is known to be destroying coral reefs,” says Rene Umberger, founder of For the Fishes and an advocate for increased regulation of the aquarium collection industry in Hawaii. “In that sense, they’re contributing to this massive amount of destruction and harm.”

The same wholesalers that supply fish for the pet industry also supply some public aquariums. Nominally illegal in most parts of the developing world, overfishing and destructive practices, such as using cyanide to stun fish, devastates tropical reefs. It’s also incredibly inefficient, with more than 80 percent of the aquarium fish sold to the pet industry coming from the “Coral Triangle,” a large area in the Indo-Pacific. In the long journey from reef to tank—which can take weeks, depending on the number of stops—fish are often subjected to stressors such as poor water quality, improper temperature, starvation, and jostling.

One of the world’s highest profile public aquariums, California’s Monterey Bay Aquarium (MBA) is transparent and vocal—unlike some aquariums—about the provenance of their animals. Paul Clarkson, a curator of husbandry operations, says his team ensures they use ethical suppliers. Like the Ucluelet Aquarium, MBA has an educational mission to focus on local ecosystems, so 80 percent of its animals are from nearby waters.

For exotic species, MBA works with a handful of trusted suppliers. Its Australian supplier, for example, sends divers to hand-collect animals specific to MBA’s order. The fish are then shipped directly to MBA without a middleman and the frequent stops typical of fish transported for the commercial pet industry. “It’s a very short supply chain,” Clarkson says. “We know where the animal was collected and how it was collected, so we can make sure it was done ethically and legally.”

Some of the companies MBA works with also supply the pet industry, but Clarkson insists on transparency and a high standard of care. He visits wholesalers in Los Angeles—a major hub for aquaria importers—to inspect the fish and inquire about an animal’s origins. MBA is also accredited by the Association of Zoos and Aquariums (AZA), which requires institutions to meet certain sourcing criteria. But unaccredited aquariums face few restrictions. “A non-accredited aquarium could very easily go down to Petco and buy their animals in that fashion,” Clarkson says.

The industry, however, is growing more alert to supply chain length issues, he points out. But the bigger goal is to eliminate the supply chain by breeding more species in captivity. MBA currently raises different jelly species, sea horses, and some cephalopods, such as cuttlefish. The aquarium learned how to culture the rarely displayed, and very popular, flamboyant cuttlefish to avoid transporting the fragile organisms from the Indo-Pacific—a trip that might take over 24 hours.

Even though the aquarium has a history of investing in and learning how to care for famously difficult-to-manage species—its success in displaying great white sharks was considered an industry breakthrough in 2004—Clarkson says he’ll walk away from a species if he’s not confident the aquarium can keep it alive and healthy. That was the aquarium’s decision after staff spent years trying to cultivate and display certain deep-sea squid species.

“Would time and energy and technology eventually make that possible?” he says. “Likely, but at the end of the day, we won’t put an animal on display if we’re not confident we can properly care for it.”

But wild animals, no matter the provenance, often still struggle in captivity, and many die, says Katherine Muzik, a marine biologist and environmental activist in Hawaii. Muzik spent several years working as a scientific consultant and translator of educational materials and scientific literature at aquariums in Japan. Muzik concedes she witnessed aquarium staff pay expert attention to their charges, but for profit and on animals confined until their deaths. “Aquariums are really built for people, they’re not for animals,” she says.

Umberger acknowledges that most aquariums give their fish more space and better care than the average home enthusiast. But she says fish still die and need to be replaced more often than the public realizes, although mortality numbers are not publicly available.

“Marine life is incredibly fragile and nearly impossible to keep alive for anything that resembles their potential natural lifespan, and that has to be the standard,” she says.

Although institutions that are accredited by the AZA are required to maintain careful veterinary and mortality records, that information is unavailable to the public. Clarkson says there is no acceptable standard mortality rate for the industry, but part of the reason is the variability of species in captivity. Much like zoos, aquariums ensure the animals are protected from predators, are provided with food, and receive veterinary care. As a result, species such as sea otters, common murres, lemon sharks, and some jellyfish species live longer in captivity than they do in the wild.

At the Ucluelet Aquarium, the animals have the best of both worlds: care, feeding, and, eventually, freedom. Also, the facility collects species that can tolerate captivity for a time. That means forgoing animals such as basket stars and other delicate, branching sea star species that require a colder water temperature than they can provide, as well as migratory animals like mature salmon.

But there are plenty of fish in the local sea and the aquarium educates local families about native wildlife. Kids chatter excitedly when they gaze at tanks teeming with marine life, and they’re just as excited the day the animals return to the wild.

Focusing on local species and ecosystems allows aquariums to manage their environmental and ethical footprints while fulfilling an educational mission, says Mark Wunsch, president of Discovery Passage SeaLife Society in Campbell River, British Columbia, which runs a 65-square-meter catch-and-release aquarium affiliated with the Ucluelet Aquarium. The society’s aquarium opened in 2013. They moved and recycled Ucluelet’s first, smaller building after the Ucluelet Aquarium expanded to a larger facility. On Canada’s east coast, Petty Harbour Mini Aquarium in Newfoundland has adopted a similar model.

Duplicating the model at larger aquariums, which display animals from all over the world, would be impractical. “The big aquariums are good, but it’s more of a consumer experience—you look and watch. Here, next time you walk out on the beach, you can see these [species] again. It builds a relationship with the environment,” Wunsch says.

The animal keepers build a relationship with their charges, too, adapting to the animals’ needs as circumstances change. In 2014, Discovery Passage SeaLife Society’s giant Pacific octopus, “Octavia,” outgrew her tank so keepers released her earlier than planned. Knowing that octopuses need places to hide from hungry seals, aquarium staff returned her to a rocky reef, where Wunsch filmed the octopus as she swiftly found the perfect den.

In 2014, Discovery Passage SeaLife Society’s aquarium released a giant Pacific octopus back to the wild when she outgrew her tank. Knowing that octopuses need places to hide from hungry seals, staff returned her to a rocky reef, where she swiftly found the perfect den.

In addition to local families and tourists returning year after year, Griffith-Cochrane says the Ucluelet Aquarium has had some repeat visitors from the sea as well. “We have in the past sometimes caught the same individual,” she says. “We collected the same stars a couple of times—we were able to tell because they had disproportionate arm sizes … and we were able to identify them.”

While the octopus remains one of its most popular attractions, Griffith-Cochrane says each of the aquarium’s five staffers and 25 volunteers has a favorite animal that can be hard to let go.

“A few years ago, it was releasing the sailfin sculpins that really pulled on my heartstrings,” she recalls. “It’s such a bittersweet event. We love releasing them, we love that they’re going back, but we also love the species that we get to work with, and it can be hard to say goodbye.”