Workers build the S.S. Olympic, one of the Titanic’s sister ships. Photo by Bettmann/Corbis

When the RMS Titanic first launched from Belfast on May 31, 1911, it was easily the largest ship on the water. Measuring a staggering 269 meters from bow to stern, the Titanic was at once a vision of maritime luxury and, it was thought, an indomitable piece of nautical engineering.

Skip forward a century and the mighty Titanic—iceberg disaster aside—wouldn’t even stand out. Today, private megayachts owned by the world’s wealthiest people have not only eclipsed the Titanic’s comparatively drab sense of luxury, they’re even encroaching on its mammoth size.

Built in 2013, the M/Y Azzam is the world’s largest private yacht. At 180 meters, the $605-million Azzam is two-thirds the length of the Titanic. Yet where the “unsinkable” ship was designed to carry 3,300 people, megayachts like the Azzam are meant for a few dozen passengers and crew. 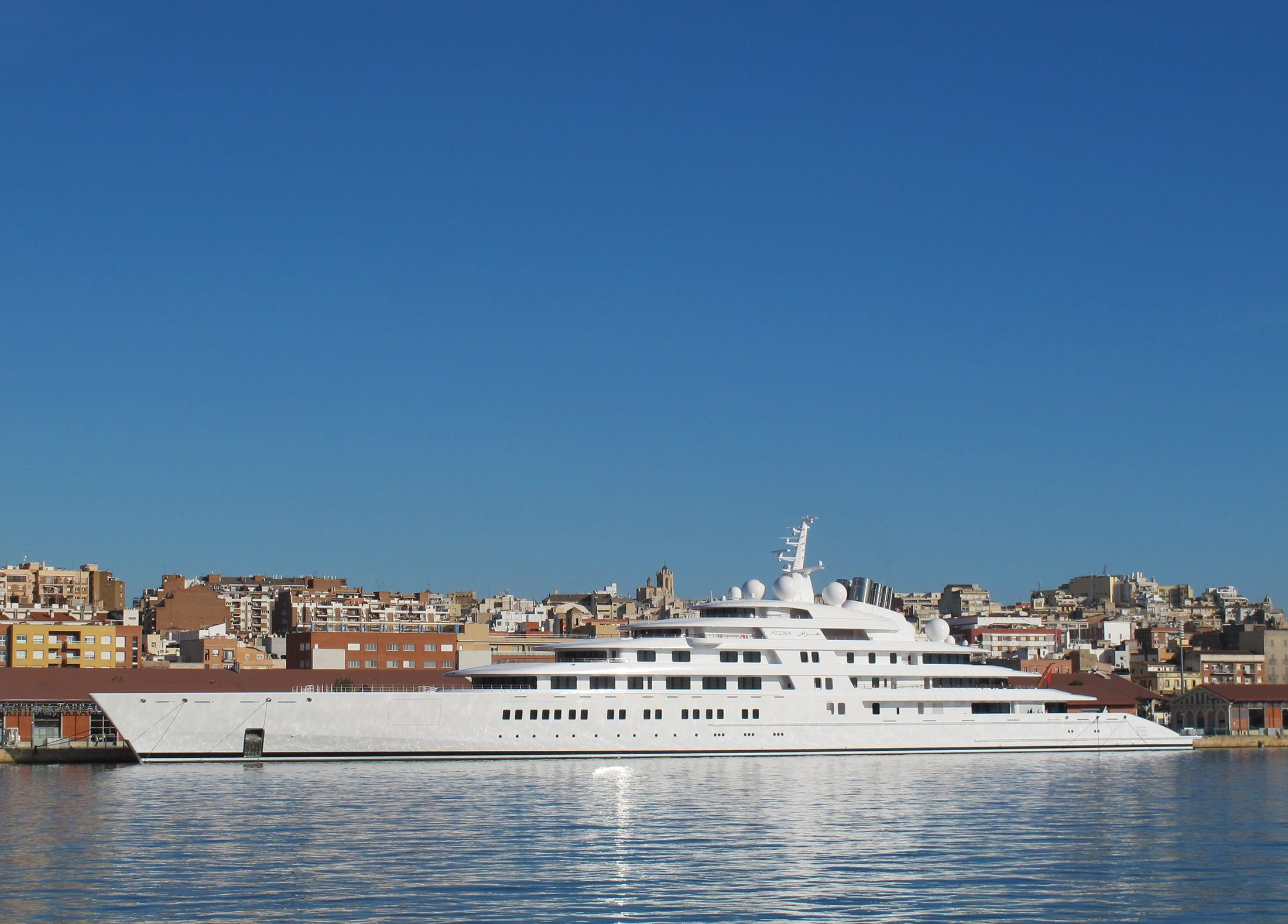 The M/Y Azzam docked in Spain. Photo by epa/Jaume Sellart/Corbis

Over the past decade the private megayacht industry has exploded. As structural engineer Andrea Ivaldi wrote in a recent study, shipyards built nearly as many large private yachts (100 meters or longer) between 2000 to 2009 as they did during the entire 20th century. In the first half of this decade, that number has already been surpassed.

There are, of course, ships larger than the Titanic. Modern cruise ships dwarf the 20th-century steamer, and cargo containers and supertankers put both to shame. But megayachts are not like other ships. Whereas cruise ships are built like apartment buildings, megayachts are floating cathedrals—all opulence and open spaces.

Megayacht owners are pushing for bigger and more extravagant ships. Combined with the competition that comes with such an obvious display of wealth, this rapid expansion is stretching the skills of nautical engineers.

“Until some years ago,” says Ivaldi by email, “yacht building was [one] business and shipbuilding was a different one.” Yachts and other ships were designed differently, out of different materials, and they followed different regulations.

Small yachts are more art than architecture, and yacht designers are not always nautical engineers. Yet as yachts have grown, designers have struggled to maintain the grandiose aesthetic while abiding by new laws and the scientific challenges that come with bigger ships. “The challenge of the shipyard is to bring those two needs together, respecting the construction schedule and—possibly—the budget,” says Ivaldi. 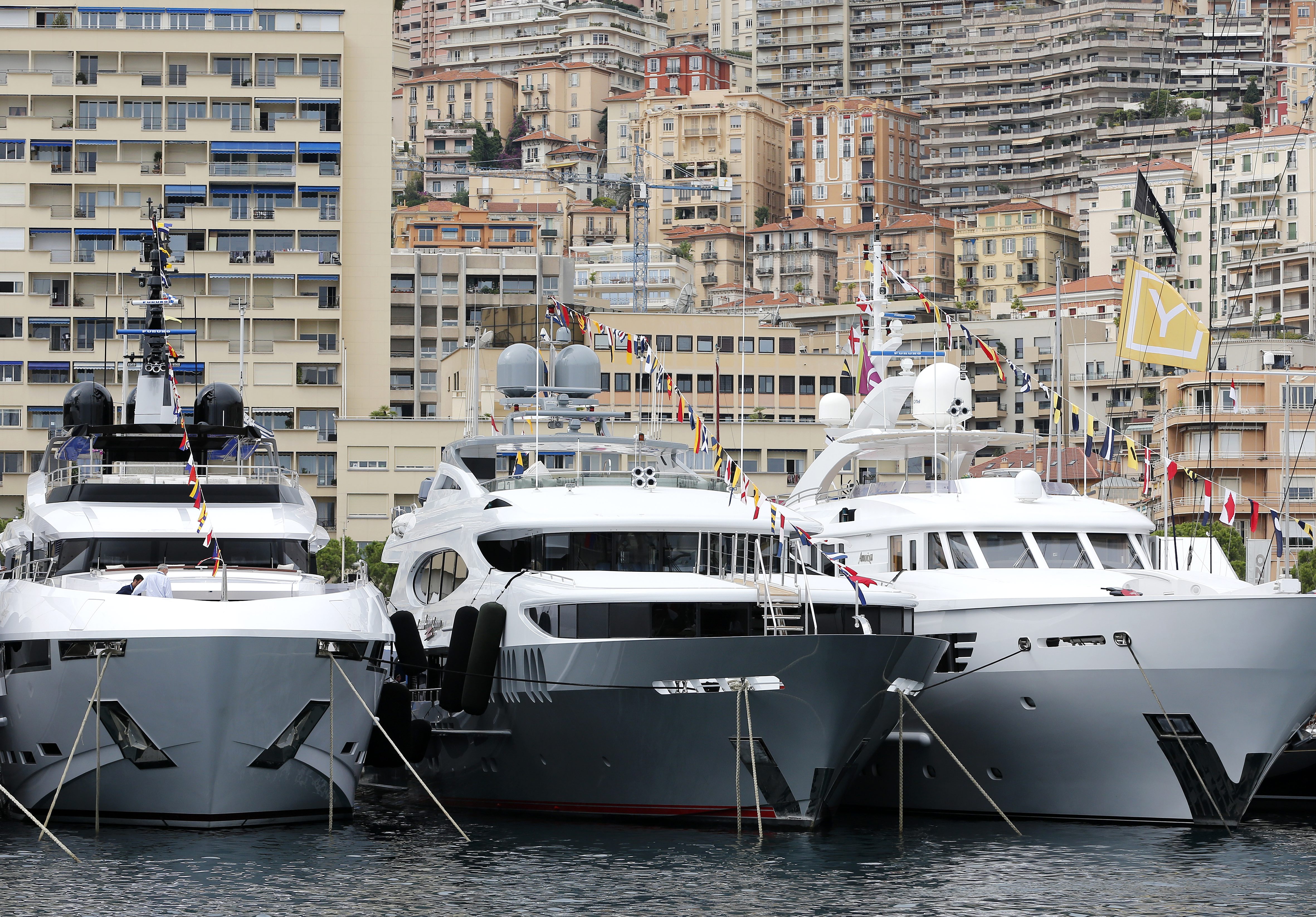 Yachts on display at the Monaco Yacht Show in September 2014. Photo by Sebastien Nogier/epa/Corbis

Once a yacht is designed to carry more than 12 people it’s considered a passenger ship under maritime law. Some yacht builders who’ve expanded into megayacht construction are aware of the newly relevant laws—for example, around the required number of lifeboats or the use of fireproof materials—while “some others don’t care,” says Ivaldi.

Famously, White Star Line was so confident in the Titanic’s ability to weather the sea that they stocked the decks with only enough lifeboats for a third of the people on board.

Some megayacht owners put a similar emphasis on form over function, says Ivaldi. The megarich don’t want unsightly things like lifeboats and structural beams blocking the beauty. At that point, it’s up to the engineers to find a solution that complies with safety regulations while appeasing the owners’ requests. Yet with some customers’ budgets exceeding that of a small country (literally), a market has emerged to build the boats of the 0.01 percent’s dreams—ships that are as sturdy as they are stunning, yet that hopefully won’t share in the Titanic’s fate.

As the head of the hull structural department at Fincantieri Yachts in Italy, Ivaldi has some insight into megayacht construction. Here, Ivaldi agreed to answer some of our more prying questions about the lavish desires of the super rich. (The interview has been lightly edited for clarity.)

Hakai Magazine: What special features do megayacht owners request and how does that affect the design of the ship?

Andrea Ivaldi: A megayacht is basically a dream. The task of the builder is to bring this dream into reality, matching the most advanced technology with the highest level of luxury available on the market.

Modern megayachts have plenty of technologically advanced features, like shell doors that give direct access to the water for swimming or for using water toys. Each one of these shell doors can weigh 10 tonnes, be 12 meters wide, open in 30 seconds, and be connected to a crane to let a small submarine down into the water. There can be 10 to 12 of these doors on a 140-meter ship. This is a major challenge for the structural engineer who must ensure the longitudinal strength of the vessel, as well as for the builder who has to ensure a complete and flush integration with the finishing when the door is open or closed.

Yachts can also have helicopter hangars or flight decks and floodable docks to access the ship with a tender. They have the most modern propulsion plants. They feature the lowest possible noise and vibration levels—so low that while sailing at full speed you often don’t have the feeling of being on a ship.

Of course all that cannot be realized without a careful and advanced design. We call it “technology of beauty,” and express the fact that nowadays the beauty cannot be possible if not supported by the most advanced state-of-the-art technology.

Hakai: What is a particularly lavish or difficult request you’ve received from a yacht owner?

AI: A common problem is when an owner expresses the desire to change something in an area that is critical for structural integrity. For instance, one owner wanted a glass bottom on their yacht. Sometimes it’s a problem to match the dream and what is technologically feasible.

Hakai: Were you able to build what they asked? What did it take to overcome this challenge?

AI: Today this [glass-bottomed] room exists, and is a dream place. Nevertheless, it took almost one year to complete all the calculations, strength verifications, and to obtain the necessary certifications to install glass in a luxury-furnished room that is reachable with a lift directly from the owner’s cabin in a place that is normally reserved for fuel oil tanks or void space.

This is, however, a good example of how the design of a yacht can be the “leading edge” of a technology. At that time there was no existing regulation to certify such an arrangement. This means that even if the design of the window clearly showed that its realization was possible, no regulatory body was able to certify it. We worked closely with the classification society to “translate” a norm applicable to submergible vessels into something that could be used on a surface ship.

Hakai: What is a particularly clever engineering solution you’ve used on other megayachts?

AI: We have delivered a yacht with a raising pool bottom. After emptying the pool, the bottom can be raised until it is flush with the surrounding deck. Then it can be used as a dance floor or even as a landing area for a helicopter.

Recently, we have presented project Skyback, developed in collaboration with the Dutch designer Cor D. Rover. Skyback is a yacht with a glass covering that can slide out from the superstructure and cover the external deck area. This lets the owner enjoy the external pool even when sailing in the Arctic.