Until the 1960s, kelp blanketed the coastline of Tasmania, Australia. Over the past few decades, 90 percent or more of the kelp has been wiped out but scientists have a plan to reverse its decline. Photo courtesy of Matthew Doggett

This article was originally published in Ensia, a solutions-focused nonprofit media outlet reporting on our changing planet. Read more stories like this at ensia.com.

Sixty years ago, Tasmania’s coastline was cushioned by a velvety forest of kelp so dense it would ensnare local fishers as they headed out in their boats. “We speak especially to the older generation of fishers, and they say, ‘When I was your age, this bay was so thick with kelp, we actually had to cut a channel through it,’” says Cayne Layton, a postdoctoral research fellow at the Institute for Marine and Antarctic Studies at the University of Tasmania in Australia. “Now, those bays, which are probably at the scale of 10 or 20 football fields, are completely empty of kelp. There’s not a single plant left.”

Since the 1960s, Tasmania’s once-expansive kelp forests have declined by 90 percent or more. The primary culprit is climate change: these giant algae need to be bathed in cool, nutrient-rich currents in order to thrive, yet regional warming in recent decades has extended the waters of the warmer East Australian Current into Tasmanian seas to devastating effect, wiping out kelp forests one by one. Warming waters have also boosted populations of predatory urchins, which gnaw on the rootlike holdfasts of kelp and compound the loss.

Tasmania isn’t the only site of destruction. Globally, kelps grow in forests along the coastlines of every continent except Antarctica; most of these are threatened by climate change, coastal development, pollution, fishing, and invasive predators. All of this matters because these ecosystems provide huge benefits: they cushion coastlines against the effect of storm surges and sea level rise; they cleanse water by absorbing excess nutrients; and they also slurp up carbon dioxide, which can help drive down ocean acidity and engineer a healthy environment for surrounding marine life. These forests—which in the case of the giant kelp species that grows in Tasmania can reach heights of 40 meters—also provide habitat for hundreds of marine species. 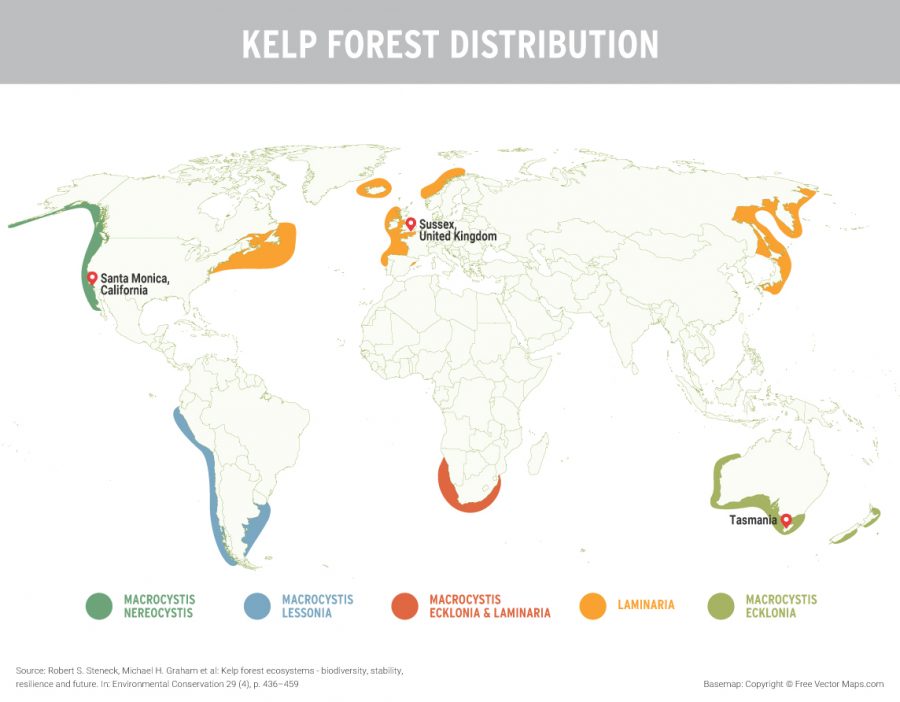 Around the world, kelps have a big impact on the environment, including a role as carbon sinks. Illustration by Ensia

Having spent years studying these benefits, Layton is now trying to bring a patch of Tasmania’s struggling kelp forests back to life. Every few weeks, he dives out to inspect three 12-by-12-meter plots he’s created off the coast, each containing fronds of baby kelp, springing from ropes that are tethered to the ocean floor. These kelp nurseries are part of Layton’s project to determine whether climate-resilient “super kelp” that has been raised in a laboratory will fare better in Tasmania’s changing seas. But his experiment also brings attention to the extraordinary potential of kelp to absorb carbon and help tackle climate change.

It’s the capacity to draw CO2 from the atmosphere that has added climate mitigation to kelp’s list of benefits. When we talk about ways oceans can sequester carbon, the conversation typically revolves around mangroves, salt marshes, and seagrass meadows. But “the magnitude of carbon sequestered by algal forests is comparable to that of all those three habitats together,” says Carlos Duarte, a professor of marine science at the King Abdullah University of Science and Technology in Saudi Arabia. “Algal forests should not be left behind. They have been hidden for much too long.”

There’s a lot we still don’t understand about how kelp stores CO2. But researchers are starting to build a better picture of this giant seaweed and how we might improve its capacity to help tackle climate change.

Australian researchers are creating kelp forests with some innovative practices.

The dilemma is that kelp itself is also under siege from warming seas—which is the focus of Layton’s work. Of Tasmania’s original forest, only around five percent remains. Researchers think these algae have survived through natural variation and selection.

“There do seem to be individuals that are adapted and capable of living in the modern conditions in Tasmania that we have created through climate change,” Layton explains.

From this remaining pool of wild giant kelp, he and his colleagues have identified what Layton calls super kelp that may be more resilient against the effects of warming seas. From these he has harvested spores, embedding them in twine to be wound around the ropes that are rooted into the seafloor. The hope is that these super kelp spores will develop into saplings that will in turn set their own spores adrift on ocean currents, seeding new mini-forests nearby.

“For giant kelp restoration to work at the scale of the coastline, we’ll need to plant many of these seed patches,” Layton explains. “The idea is that over time, those will self-expand, and eventually coalesce—and there’s your giant kelp forest back.”

Other kelp restoration projects around the world are tackling different threats. In Santa Monica Bay, California, conservationists are trying to save local kelp forests from voracious purple urchins, whose population has exploded since a major predator—the sea otter—dramatically declined decades ago. The urchins’ unchecked appetite has contributed to the loss of three-quarters of the bay’s former kelp forest. But fishers are carefully hand-clearing urchins—the draw being that as kelp is restored, fisheries are, too. So far they’ve managed to clear 21 hectares, which the kelp forest has reclaimed.

“All we had to do is clear the urchins out of the way,” says Tom Ford, executive director of the Bay Foundation, which is leading the effort. 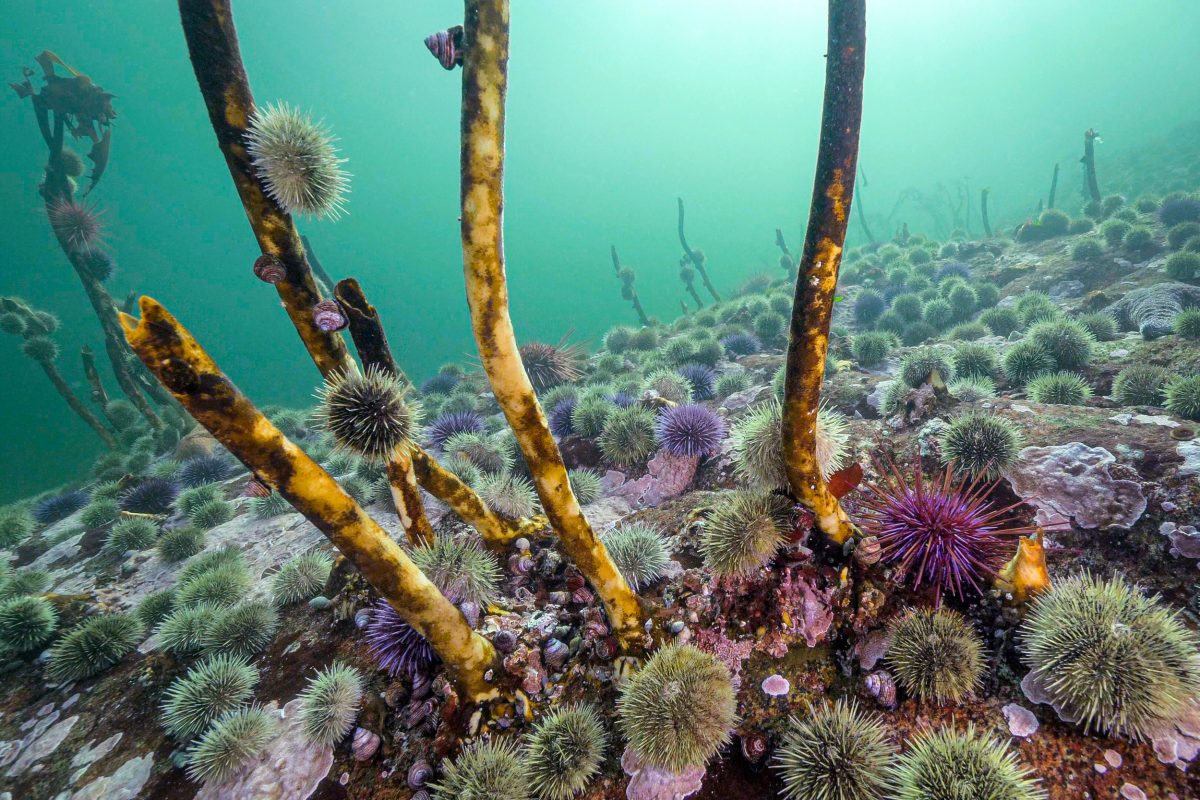 Sea urchins can mow down a kelp forest and create a barren zone at the bottom of the sea. Photo by Grant Callegari

The project’s success has caused others to ponder its carbon sequestration potential, Ford says. The City of Santa Monica recently established a goal of reaching carbon neutrality by 2050, and asked the Bay Foundation how kelp restoration could factor into that. A nonprofit called Sustainable Surf has also launched a program enabling people to invest in the kelp restoration project to offset their own carbon footprints.

“These kelp forests grow so fast and suck in tremendous amounts of carbon,” Ford says. In California there’s a focus on preserving wild lands with carbon credits, he explains. But the uptick in regional wildfires means that land-based forests might no longer seem like the safest bet. “Now, working off the coast is becoming perhaps a more important option.”

Similarly, in England, a plan known as Help Our Kelp aims to restore a 180-square-kilometer tract of historic kelp forest along the country’s southern Sussex coast. It has attracted the interest of two local councils and a water company, which are intrigued by its potential to provide a new carbon sink. “All three organizations are interested in carbon, but also interested in the wider benefits [of kelp forests],” explains Sean Ashworth, deputy chief fisheries and conservation officer at the Association of Inshore Fisheries and Conservation Authorities, a partner on the project.

Yet key questions remain about where all the stored carbon ends up. Trees stay in one place, so we can reasonably estimate how much carbon a forest stores. Kelp, on the other hand, can float off to unknown destinations. If it begins to decompose, its stored carbon may be released back into the atmosphere, explains Jordan Hollarsmith, a marine ecologist at British Columbia’s Simon Fraser University and Fisheries and Oceans Canada. “Truly removing that carbon from the global carbon budget would require that those kelp fronds somehow be buried, or transported to the deep sea,” she says.

In fact, emerging research is beginning to paint a picture of seaweed’s journey through the ocean. A 2016 study estimated that about 11 percent of global macroalgae is permanently sequestered in the ocean. The bulk of that, about 90 percent, is deposited in the deep sea, while the rest sinks into coastal marine sediments. 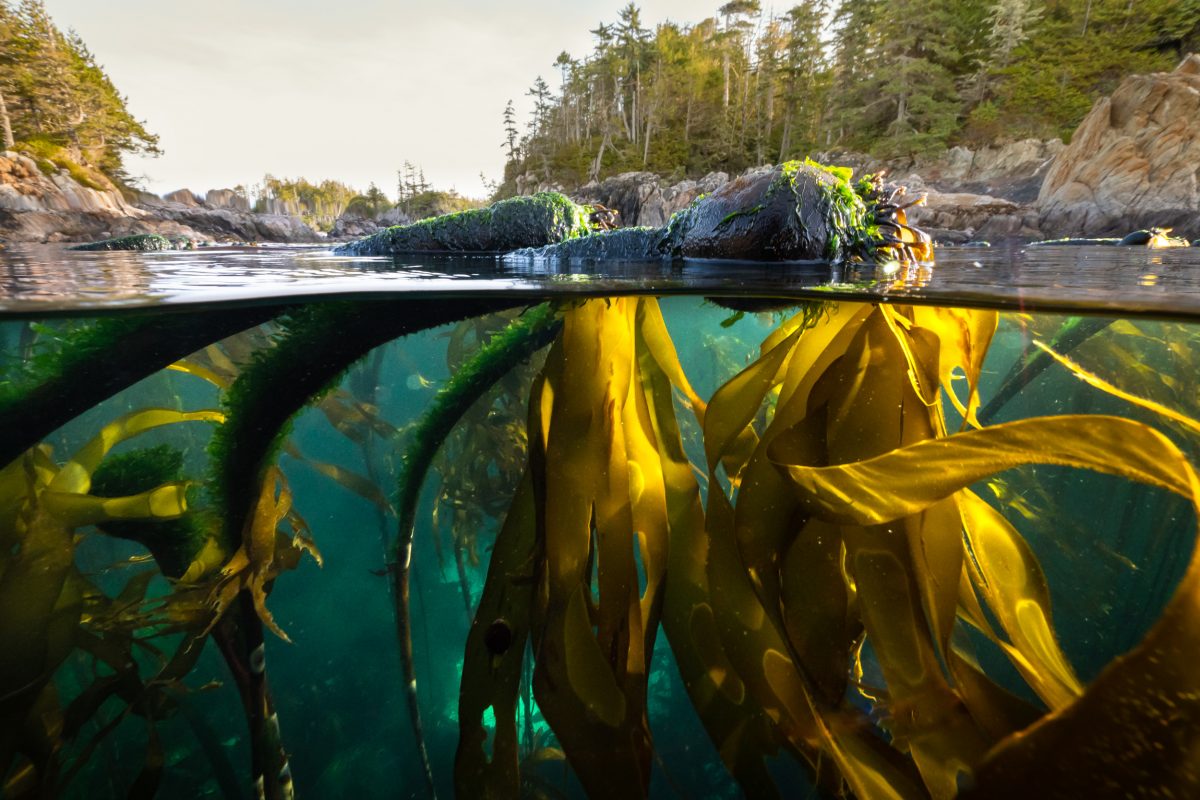 Kelp forests may be an essential ingredient in plans to beat back climate change. Photo by Grant Callegari

“If the algae reaches below the 1,000-meter horizon, it is locked away from exchange with the atmosphere over extended timescales, and can be considered permanently sequestered,” says Dorte Krause-Jensen, a professor of marine ecology at Aarhus University in Denmark and author on the 2016 study along with Duarte. Still, the challenge of tallying this up remains. Compared with mangroves, seagrasses, and salt marshes, which deposit carbon directly and reliably into the sediments below, the inherent changeability of a kelp forest makes the sequestration harder to accurately quantify. But this could change, Duarte says, if kelp forests came under strict human management—something that’s already happening with smaller species of seaweeds that are being farmed worldwide for food products and fertilizer.

Could we similarly bring vast kelp forests under human control for the benefit of the planet? Brian Von Herzen, executive director of the nonprofit the Climate Foundation, thinks so. The Climate Foundation is a partner on Cayne Layton’s project for climate-resilient kelp, and Von Herzen is a major player in the field of marine permaculture, a type of open-ocean seaweed farming that mimics wild kelp forests to regenerate marine ecosystems, boost food security, and sequester carbon.

Central to Von Herzen’s vision is an array on which kelp would grow, hovering 25 meters below the ocean’s surface. Using solar, wind, and wave energy to drive their motion, hoses fixed beneath the structure would siphon up colder, nutrient-rich water from the depths below. This cool water infusion would re-create an ideal microenvironment for the tethered kelp to thrive; the kelp would then oxygenate the water and create new fish habitat—all while capturing carbon, Von Herzen explains.

While these deepwater kelp forests are only hypothetical, Von Herzen is currently trying out prototype arrays in the Philippines to help make seaweed farming more resilient to climate change. Seaweed farmers there have suffered major losses as a result of warm ocean currents that sweep in and decimate their crops. But with the upwelling of cooler water generated by the new arrays, seaweed is starting to flourish again. 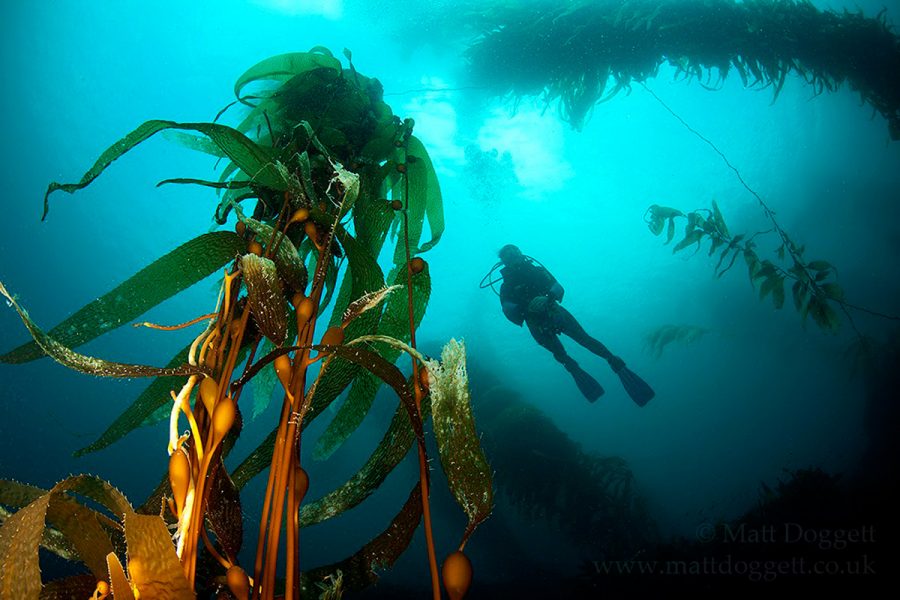 The dream is to expand giant kelp forests across the Tasmanian coast and elsewhere. Photo courtesy of Matthew Doggett

This project, and others being developed off the coasts of Europe and the United States, is laying the groundwork for Von Herzen’s ultimate ambition: to dramatically scale up kelp arrays, eventually spanning great tracts of deep ocean where they could collectively absorb billions of tonnes of CO2 while also providing food security in the form of shellfish aquaculture and fish habitat and providing what he calls “ecosystem life support.”

Kelp could be buried in the deep sea to sequester carbon or be harvested to produce low-emissions biofuel and fertilizers, he says. “We use the thriving wild kelp forest as the ecosystem model for what we can scale in the oceans,” Von Herzen says.

On the back of her research, Krause-Jensen is optimistic about the carbon sequestration potential of kelp and the possibility that it could be dramatically enlarged by sustainable farming. But practically speaking, in nations like Australia and the United States, Duarte says, “it’s harder to get a concession for a seaweed farm than for oil and gas exploration.” And global systems for providing compensation for sequestering carbon are not yet set up to accommodate kelp.

Christophe Jospe, the chief development officer at Nori, a company that is working to make it easier to fund carbon removal initiatives, argues that with such a powerful sequestration tool at our disposal, we should accelerate its acceptance—even if seaweed farmers are only able to guarantee sequestration for, say, 10 years.