Busting apart this aging dam on the Jeremy River in Connecticut opened up 27 kilometers of salmon habitat and spawning gravel for the first time in close to 300 years. Other fish will benefit too, including the eastern brook trout, sea lamprey, American eel, and river herring. Photo by Lia McLaughlin/USFWS

In staid New England, if a younger man drives onto the property of an elderly woman and threatens to knock something down, you expect pushback: an argument, a call to the authorities, and the subsequent removal of the man from the premises. But on a cool November morning in Colchester, Connecticut, quite the opposite is occurring. Here, on the banks of a midsized watercourse called the Jeremy River, Steve Gephard, a fisheries biologist with the Connecticut Department of Energy and Environment Protection, has arrived with Sally Harold of the Nature Conservancy and a backhoe-mounted jackhammer. They direct workmen to rip down a dam on the property of 84-year-old Yankee matriarch Nan Wasniewski. As the jackhammer bashes through the concrete, and water begins flowing unimpeded downstream for the first time in almost three centuries, Wasniewski, dressed in a crisp blue windbreaker, can only shake her head at the spectacle. She sold the dam to the town for a dollar. In return, she earned the chance to bring a river back to life.

The oddball demolition team of Gephard, Harold, and Wasniewski came about as part of a nascent environmental movement to free America’s rivers from the scourge of dams. In New England, this effort is subtle and often invisible to the larger community. Indeed, most of the dam fights that garner public attention focus on giant Pacific waterways—the mighty Columbia River and its Grand Coulee Dam, for instance—that were impounded and robbed of their salmon during the Great Depression era of public works.

But the rivers and fish that may have suffered the greatest damage from dams are modest in size and distributed up and down North America’s Atlantic coast. In Connecticut alone, where I watch the dam busting on the Jeremy River, there are over 4,000 dams. Across greater New England and on into Canada there are upward of 50,000—no one really knows the exact number. This chockablock arrangement of impediments has decimated not just iconic species such as Atlantic salmon and sturgeons but the equally important little fishes, including river herring, shad, and American eel. These small fishes—which are keystone species, critical to aquatic food chains—once spawned in coast rivers in the billions. Now, they are largely erased from modern memory in the region. 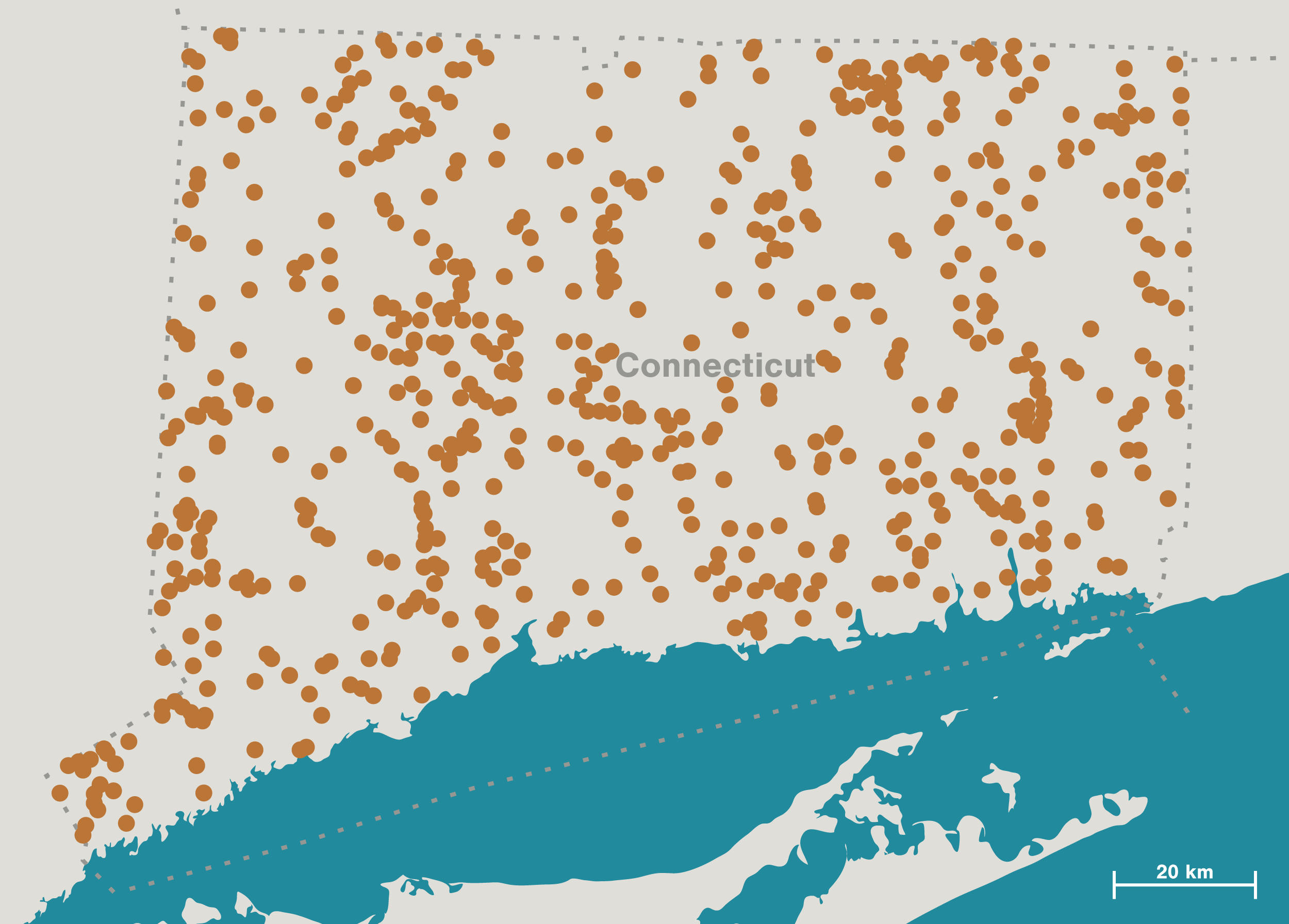 Connecticut has over 4,000 dams, most of which have no use yet continue to degrade valuable fish habitat. Data from the US Army Corps of Engineers’ National Inventory of Dams. Illustration by Mark Garrison

And the worst part of it all is that most of these dams serve no purpose today. Like abandoned fishing nets—“ghost nets”—set loose from a sunken fleet, they kill and cripple on behalf of masters that disappeared long ago.

The life and death and rebirth of the Jeremy River offers a kind of micro history of all the ways early settlers mistreated waterways that sustained the original inhabitants for thousands of years. In its natural state, the Jeremy babbled unimpeded south and southwest before joining up with the Blackledge River to form the Salmon River, which in turn spilled into the Connecticut River and the ocean beyond. True to its name, the Salmon River had a run of Atlantic salmon that returned from Greenland every year to spawn.

All that started to change after Wasniewski’s distant ancestor, Martha Carrier, was executed for witchcraft in Salem, Massachusetts. Her bereaved husband, Thomas, moved to Connecticut with their children and set up shop on the Jeremy. His descendants cleared the land and dammed the river to provide power, possibly for a gristmill to grind grain into flour or for a sawmill to work all that timber into board feet. “We actually found the remnants of the [original] old wooden crib dam around the corner,” Gephard says, shouting over the noise of the piledriver as he points upstream. 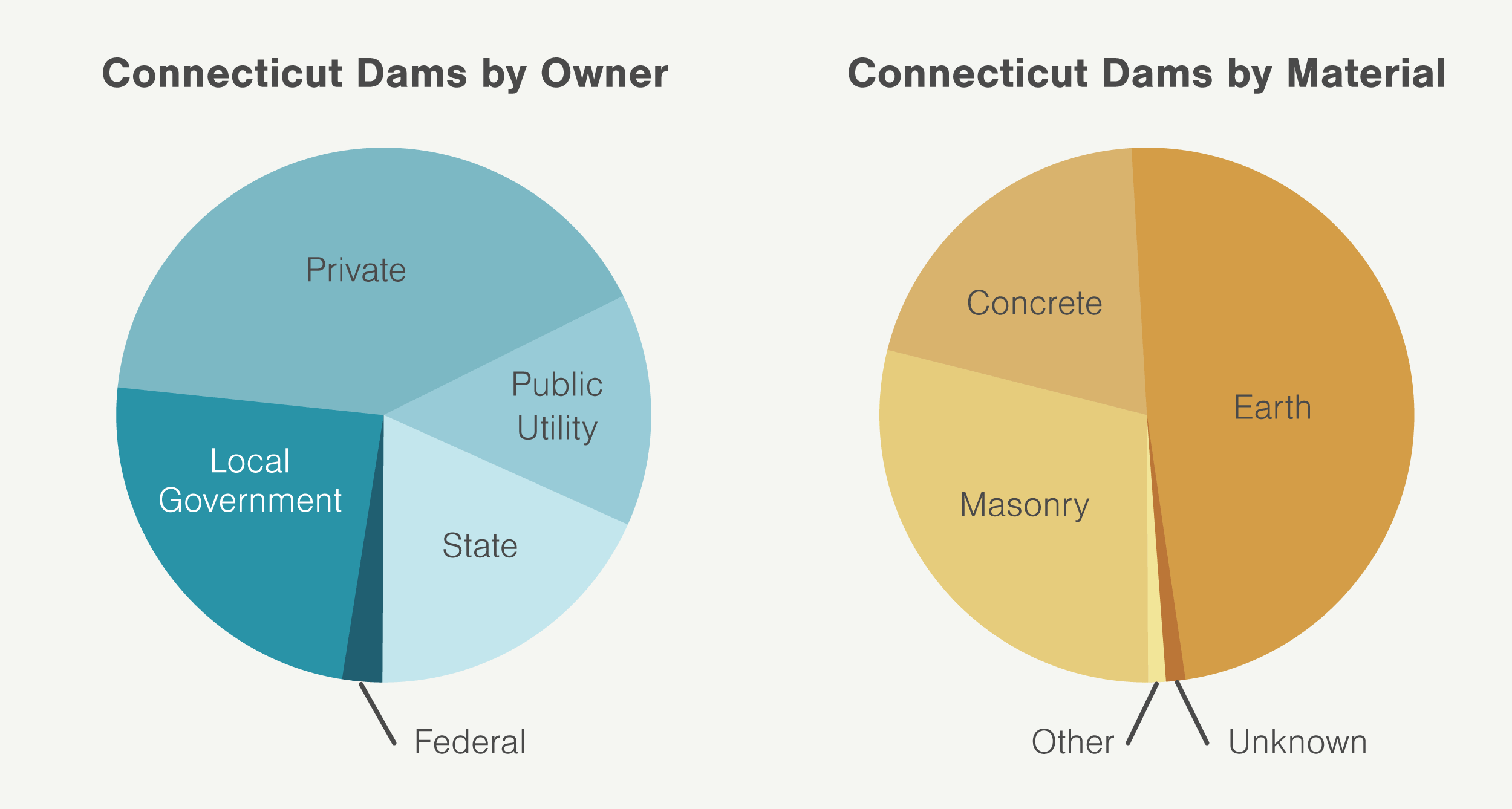 The US Army Corps of Engineers provides maps and data on dams in each state. Connecticut dams, like most New England dams, date to the first wave of industrialization in North America. Illustration by Mark Garrison

This first phase of dam building occurred all over the North America’s east coast, often subsidized by local governments eager to tame the surrounding wilderness. The town of Dedham, Massachusetts, for example, granted one Abraham Shawe 24.3 hectares of land in 1637 in exchange for building a corn mill. In 1680, the town of Andover, Massachusetts, offered free timber and real estate to any citizen who would put up a sawmill, gristmill, or fulling mill (for preparing cloth) on the Shawsheen River. And to put a particularly ironic point on it, many of these early dams were thrown across rivers to create ice ponds to service the burgeoning seafood industry—and in the process killed off the very seafood for which all that ice was needed.

Timber cutting and grist milling eventually disappeared from Atlantic streams and rivers, but the damming continued as 19th-century industrialists built new structures atop old ones. At the Jeremy River, a bit of history from that era is unearthed when the backhoe shifts the jackhammer to beat away another section of the dam. Old rocks and timber become visible beneath the concrete; it’s part of the dam from the 1830s. “It was used to supply mechanical hydropower. And all that came in with Slater,” Gephard says.

Samuel Slater, known in Great Britain as “Slater the Traitor,” famously stole British spinning technology and brought it to Rhode Island in the late 18th century. There he became the first to marry the power of an American river with a textile roller spinner and produce mechanically spun cotton. Because New England rivers run along steep pitches and have numerous falls, they were ideally suited for industries requiring mills. Within a few years of the construction of Slater’s original mill, dozens of others sprouted up from southern Maine to Connecticut. This infrastructure was soon used to accommodate other industries. The advent of a paper combine that beat old rags into pulp spurred development of paper mills, and Wasniewski’s ancestors probably seized on some of this new pulp-milling technology. They raised the height of the original dam to create Norton Mill and began producing heavy paperboard for buttons, bookbinding, and shoe platforms. And when electricity was finally mastered in the late 19th century, the mill was further modernized: the stone dam was encased in concrete, equipped with turbines, and raised two meters. 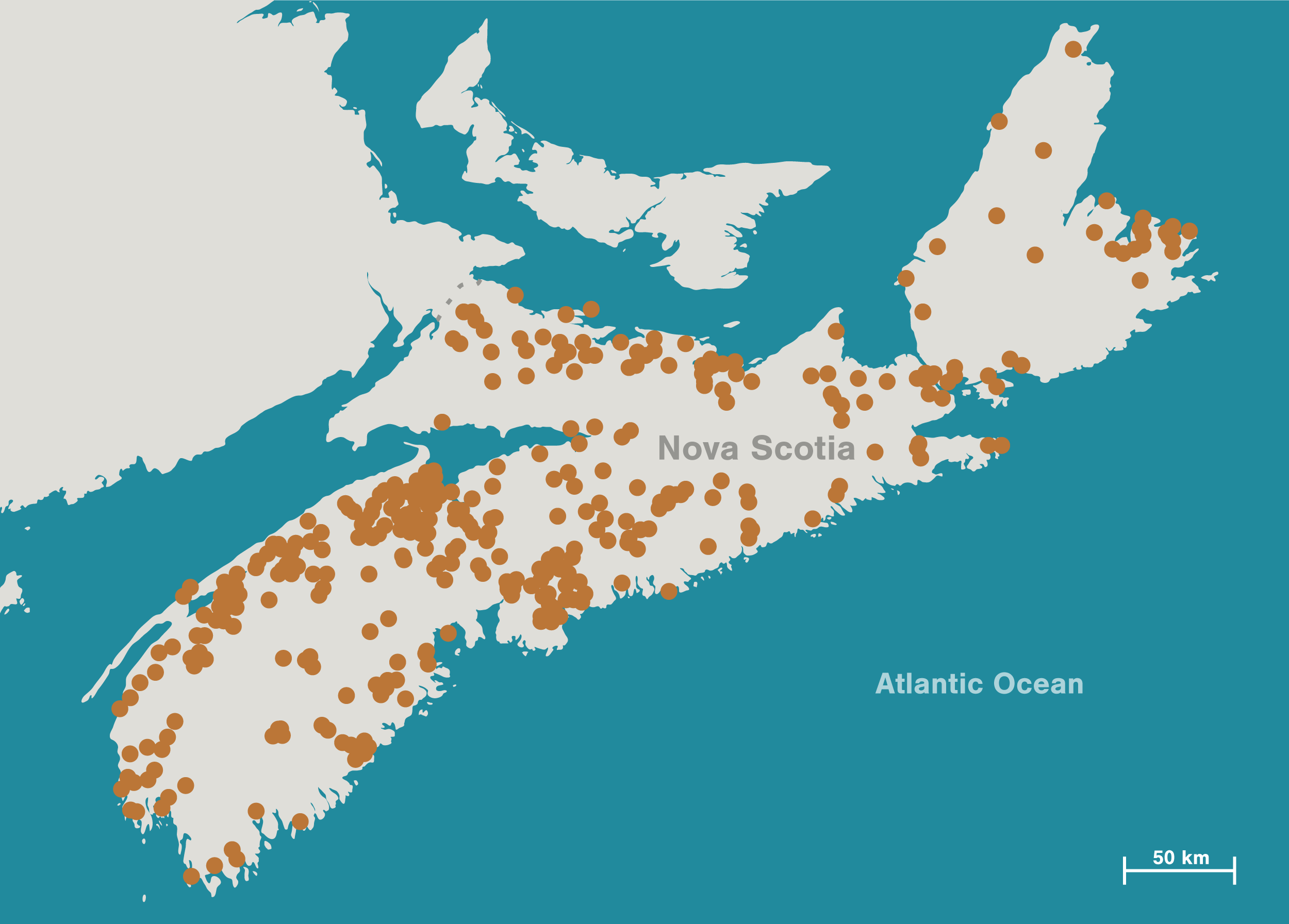 Across greater New England and eastern Canada, there are upward of 50,000 dams. Canada has no central database, but Dalhousie University researchers report that Nova Scotia, for example, is riddled with old, decaying dams. Illustration by Mark Garrison

But ultimately, those textile and paper mills faded away too. Paper production moved to the Pacific Northwest and textile looming moved overseas. Norton Mill suffered. At one point, the family sold the mill and dam only to buy it back under a right of first refusal. But the economics of milling never improved, and the family leased out the property and mill buildings to various small businesses. Meanwhile, the dam grew obsolete. Then a fire started by a fireworks display finished off the mill in 2003. The damages wrought by Hurricanes Irene and Sandy only made holding onto the property more difficult. “People like to think that these old dams somehow provide flood control,” Gephard says. “But it’s exactly the opposite.” Dams raise the water level and, when it pours, surrounding properties flood.

After the fires, a few subsequent acts of vandalism, the hurricanes, and the floods, the owners of the dam on the Jeremy River knew something had to be done. “A dam owner has to maintain it,” Wasniewski says. “I did not want to leave that as a legacy to my heirs.”

Which is why, when approached by the Nature Conservancy, Wasniewski agreed to meet Gephard and Harold.

The process to free the Jeremy River began in the fall of 2011. Harold negotiated the complicated government funding mechanisms—programs to restore the health of waterways or mitigate storm damages—to raise the nearly half a million dollars required to take down the Norton Mill dam. 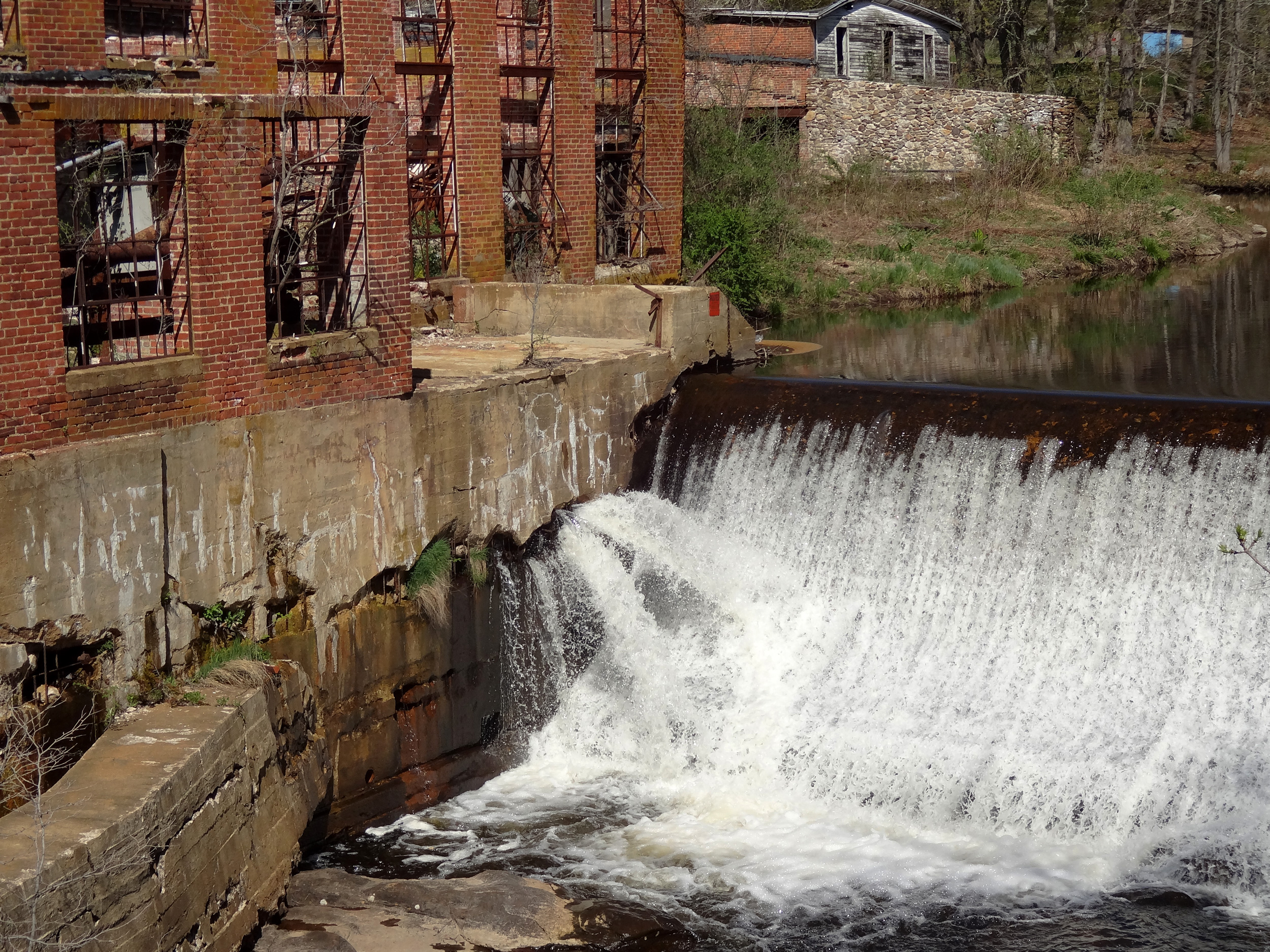 The Norton Mill was owned by Nan Wasniewski, whose ancestors fled the aftermath of the Salem witch trials in Massachusetts for a new start in Connecticut. They built their first mill in the 18th century. Photo by Lia McLaughlin/USFWS

For the past 15 years, Harold and Gephard have worked together on numerous projects and have removed five dams from Connecticut waterways. Harold says they have a wish list of dozens more dams in the state that they’d like to see come down. But apart from raising necessary funds, which can range from tens of thousands to millions of dollars for the removal of a single dam, Harold and Gephard spend most of their time meeting with owners whose ties to their dams can go back centuries. “It’s about trying to get dam owners to do something that they can’t quite decide,” Harold says. “You have to basically say, ‘trust me.’”

In the case of Wasniewski, Gephard and Harold had three photo renderings of her site on the Jeremy River drawn up: one with the repaired dam and a fish ladder to allow fish passage; one with the dam lowered by half and a smaller fish ladder; and one with the dam removed entirely. As Gephard showed the photo renderings to Wasniewski, he explained that the Jeremy was a jewel of a river and that removing the dam would open up about 27 kilometers of pristine salmon habitat and spawning gravel, giving Connecticut’s Atlantic salmon easy access to the ocean for the first time in almost 300 years. Wasniewski looked at the last rendering, the one without a dam, and was sold. “And I imagined in the place of the old mill a beautiful park. And I said, ‘Let’s go with this one,’” she says.

The Wasniewski family owns an old cannon that was forged in the Jeremy River valley back around the time when their family first fled the Salem witch trials. Nowadays, they fire it on the Fourth of July, and at funerals and weddings, events that mark a shift in the Wasniewski family dynamic. Now, as Wasniewski looks forward to the opening of the park that may one day have salmon swimming in the river below, she anticipates carrying the old cannon down to the riverbank. She’ll fire it in honor of the new park and the reinvigorated river—and hopefully a new generation of fish.