Removing the flesh from a stranded blue whale is not for the faint-hearted, as these three people can attest. They’re carefully removing the skin and blubber of a whale that stranded along the coast of Chile, in preparation for an eventual museum display. The carcass is resting upside down, with the pleats of the whale’s throat clearly visible. Photo by Jacqueline Windh

The soft rubber soles of hip waders are not designed for climbing a dead whale. Benjamín Cáceres digs in hard with his feet. He grabs the blue-black pleats of the whale’s throat with one rubber-gloved hand, and pulls himself up the rotting carcass. In his other hand he clutches a cheap, plastic-handled knife.

Cáceres, a marine biologist at the Río Seco Museum of Natural History in Punta Arenas, Chile, is part of an 11-person crew tackling the formidable challenge of defleshing this 21-meter, 70-or-so tonne juvenile blue whale. It is the first step in preparing the skeleton for museum display.

Report of the stranded whale came in the week before, when government officials contacted Cáceres’s colleague Aymara Zegers at the museum. Zegers and marine biologist Gabriela Garrido were on the road immediately: heading to Punta Delgada, at the Strait of Magellan’s eastern entrance, a two-hour drive north of Punta Arenas.

The great size of the animal, the location and shape of its dorsal fin, and the distinctive gray marks on its body indicated to the pair right away that it was a blue whale. This was significant: it was the first documented occurrence of a blue whale in the Strait of Magellan, and the southernmost-known stranding of a blue whale anywhere in the world. 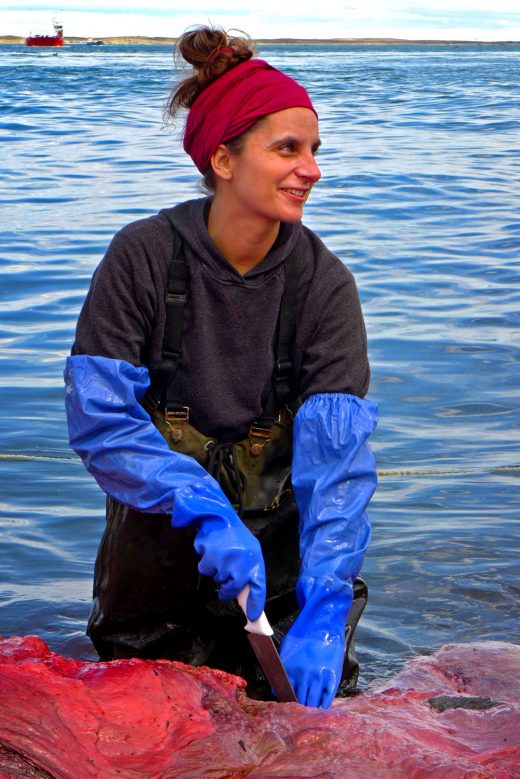 Aymara Zegers from the Río Seco Museum of Natural History in Punta Arenas, Chile, is part of an 11-person crew assembled to remove the flesh from the stranded whale. Without access to proper flensing tools the team uses inexpensive kitchen knives to cut through the tough skin and thick blubber. Photo by Jacqueline Windh

Although blue whales are found in all of the world’s oceans, a century of whaling resulted in a population drop of over 90 percent. Their populations today are listed as endangered by the International Union for Conservation of Nature. Scientists working on whale genetics and documenting migration routes are only beginning to delineate the ranges of individual populations, and to define some of those populations as subspecies. South Atlantic blue whales are among the least studied, so this whale, and in particular its DNA, will provide valuable data.

Zegers and Garrido returned to the site for two days, working alongside veterinarian Olivia Blank and two veterinary students, to conduct a necropsy and attempt to determine the cause of death.

“First, we opened the whale to expose the lungs, intestines, and liver,” Zegers explains. Fluids gushed from the incisions, forced out by the immense weight of overlying flesh. The team sampled the fluids, as well as tissues and stomach contents. “These can help determine the possible cause of death, for example as a result of heavy metals or microplastics or red tide organisms,” says Zegers. 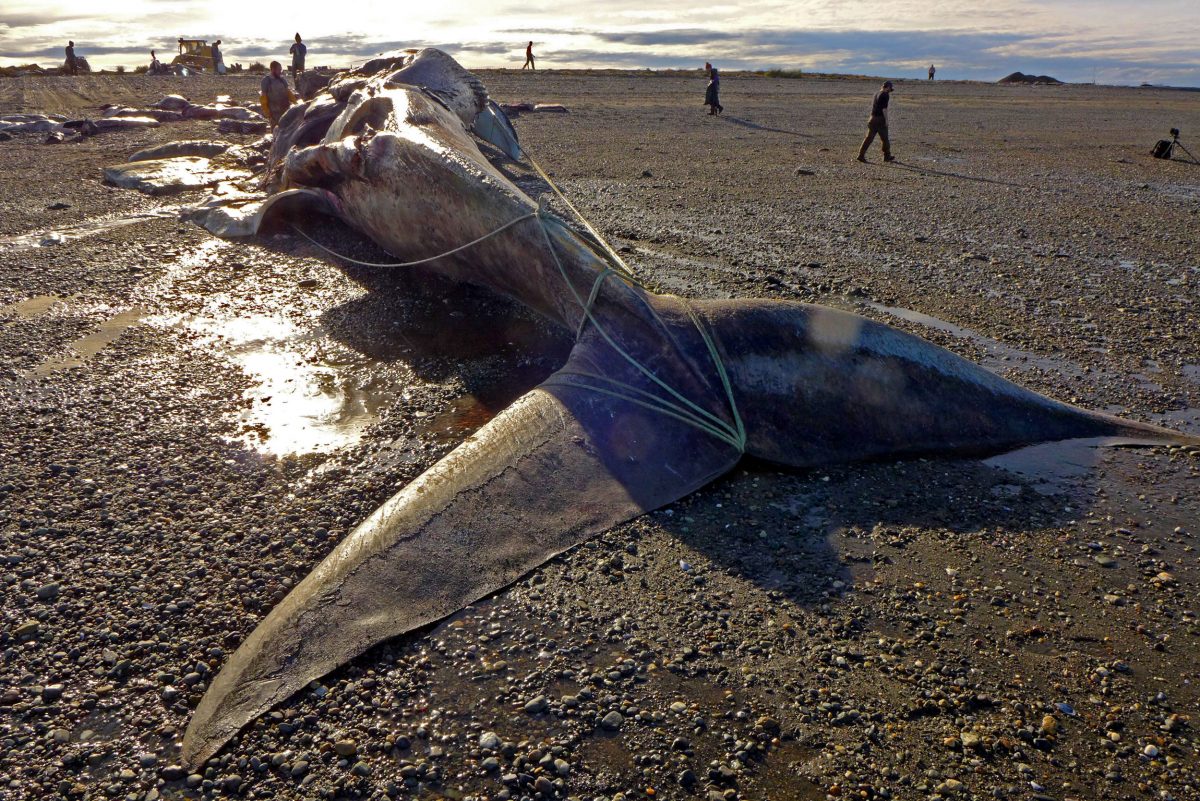 As the tide falls at the end of the first day of defleshing, the full length of the whale is visible and accessible to the team. In the distance, slabs of skin and blubber wait to be hauled up the beach and buried. As huge as it seems, this juvenile blue whale is only about two-thirds the size of a large adult, which can reach up to 30 meters in length. Photo by Jacqueline Windh

The team also took skin for DNA testing and examined the whale’s ovaries. Although the ovaries were small, another indication that the whale was not yet fully mature, she was starting to ovulate—a sign that the young whale was moving into her reproductive phase and therefore of generally good health.

Now, with the necropsy complete, the defleshing team can get to work. Whale strandings are unpredictable events that cannot be programmed into schedules or budgets. Most of the workers are friends of the museum crew, volunteering time and muscle to this stinkiest of tasks in exchange for a once-in-a-lifetime experience. The museum does not have access to flensing knives, the best tools for the job, so instead the volunteers use cheap kitchen knives that Zegers purchased on her way out of town.

The goal over the coming days is to remove as much of the flesh as possible. Then they will carve the skeleton into parcels of manageable size for transport to the museum. Some bones, such as the jawbones, parts of the skull, and the ribs, will separate from one another naturally. Other sections, such as the vertebrae, will be cut up by hand.

Whale defleshing in action. Now if only we could embed smell. Video by Jacqueline Windh

The tide is high and still rising. The hip waders are essential to the job—not only to wade out to the rear half of the whale, but also to protect the workers in this less-than-sterile environment, as they move over this mountain of putrefying flesh, and even inside the whale. Half of the crew stands in the water alongside the torso. They tackle it in pairs: one person saws through the tough skin to carve out meter-sized squares of blubber, while the other stabilizes the slab with a meathook and slowly peels it back.

A local ferry operator has loaned workers and equipment to help with the cleanup. The men fasten ropes to 100-kilogram slabs of blubber and flesh and tow them above the tideline with four-wheel-drive trucks, where they are buried in the sand with an excavator.

Zegers has joined Cáceres on top of the whale. On hands and knees, they stab into the corpse, trying to penetrate the tough skin to outline a new slab. Another crew member works inside the mouth, hip-deep in a two-tonne pot of putrid pink soup that once was the tongue. Nearby on shore, a team member with a whetstone provides an endless stream of razor-sharp knives.

The freshly exposed pink flesh and the crimson blood oozing from the corpse quickly turn black under the summer sun. This is only the first day of the defleshing, a labor-intensive process that will take around a week.

After first cutting through the flesh and blubber to carve a large slab, the team uses meathooks to gradually pull the flesh away from the bone. As they ease the slab off, other team members continue to trim the flesh, cutting as close to the bone as possible without damaging it. The slabs, which each weigh approximately 100 kilograms, will be dragged up the beach and buried. Photo by Jacqueline Windh

The next phase will fall to Cáceres’s brother, Miguel, a visual artist, who’ll take charge of the bones. “We get to choose the pose that each skeleton will have for posterity,” Miguel says. Preparation of the skeleton will take between two and four years.

First will come the lengthy cleansing process. All but the largest bones will be boiled in vats of sodium perborate solution to dissolve the natural oils, before being painstakingly cleaned by hand to remove any remaining bits of flesh.

Many of the bones will need to be repaired, or even reconstructed. “Once a whale is stranded on land, its internal structures start to collapse,” Miguel explains. “Its bones are broken by its own collapsing weight.”

The final stage will be the delicate and time-consuming process of reconstructing the skeleton for display. Each bone will be given a protective coating to prevent deterioration over time, before the skeleton is reassembled using wires, pins, and other structures of stainless steel to join the pieces. 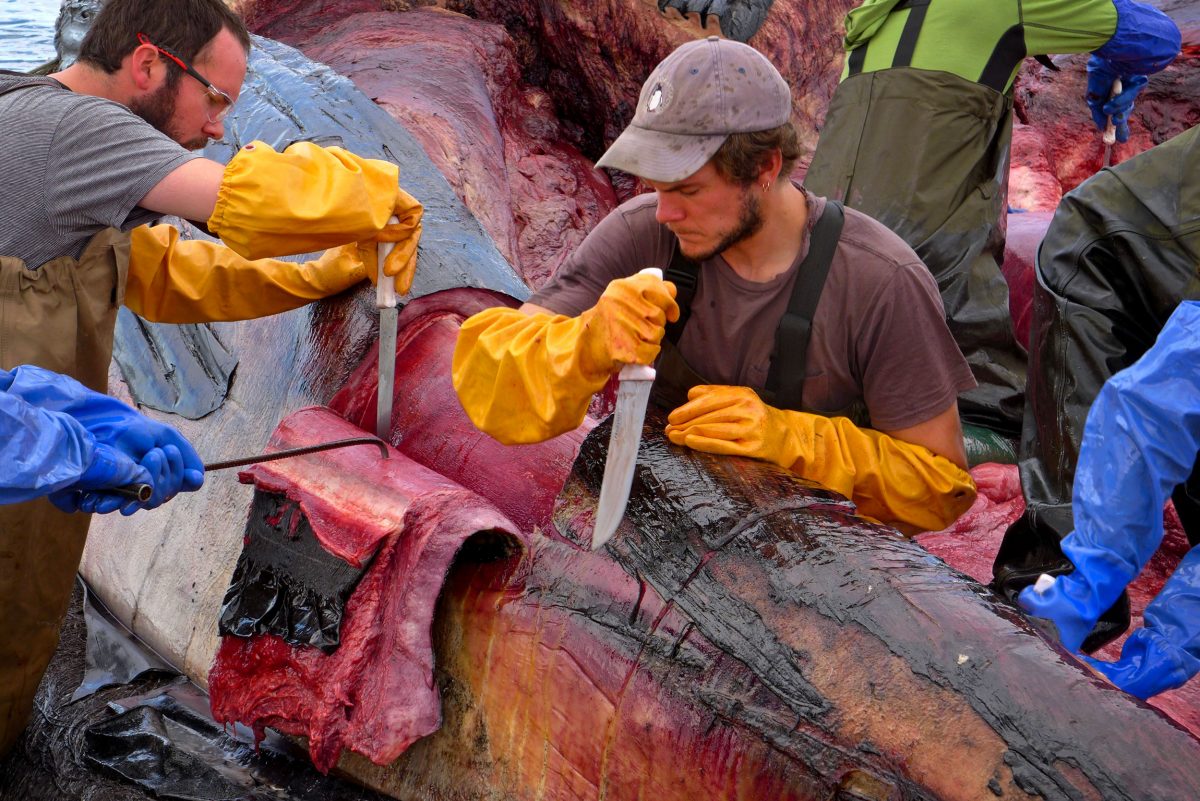 Proceeding slowly so as not to nick the bones, Miguel Cáceres (left) and Benjamín Cáceres (right) carefully cut a slab of flesh from the whale’s jaw while a third person uses a meathook to peel it off the bone. Benjamín and the workers behind him are sitting inside the roof of the whale’s mouth. Photo by Jacqueline Windh

Preliminary measurements of this whale’s body suggest that she bears more similarities to a subspecies known from the Indian Ocean than to blue whales from nearby populations in either central Chile or Antarctica. The museum’s team eagerly awaits the DNA results, which will help determine where she came from.

The DNA test will not, however, reveal the cause of death, and the necropsy was inconclusive. The blubber thickness was typical for a juvenile, and food in her digestive tract indicates she had been feeding. There was no evidence of toxins or other signs of illness.

However, Zegers notes that on the first day that she visited the stranding site, a group of five killer whales—the blue whale’s only known predator—passed by very close. “When we arrived, the whale had only been dead a few hours. It was very fresh, with its skin intact.” And the necropsy indicated no water in the lungs, meaning the whale was likely still breathing when she came ashore.

“We will probably never know for sure why she died,” says Miguel. The team’s best guess is that somehow this young whale had been separated from her family group and had beached herself—perhaps intentionally, or perhaps a poorly judged maneuver on a falling tide—as a result of being harassed by the killer whales. Although the blue whale will reveal much about her species to science and to the visitors who will one day see her on display, her personal story will remain a mystery.