Things are far more resilient than I ever imagined. Me, green sea turtles, coral reefs blown to bits by atomic bombs. In a twist of fate that even surprised scientists, Bikini Atoll, site of one of the world’s biggest nuclear explosions, is now a scuba diver’s paradise. Bikini Atoll, located in the Pacific’s Marshall Islands, didn’t just inspire the famous bathing suit; the US Army detonated the first hydrogen bomb there. Between 1946 and 1958, 23 nuclear explosions were carried out, at an incalculable cost to the people and the marine environment. Fifty years later, scientists record a thriving coral reef habitat that includes large tree-like branching coral formations with trunks the diameter of dinner plates. “It’s made a brilliant recovery,” says Zoe Richards, a scientist at the Australian Museum.

I’ve been awash in uplifting news about the ocean lately. Each day, tweets from #OceanOptimism alert me to marine conservation successes happening all over the world: a new marine sanctuary in the Galapagos Islands to protect the world’s highest concentrations of sharks; green sea turtles in Florida and Mexico no longer listed as endangered thanks to successful conservation efforts; a major fishing deal that offers protection to Arctic waters.

#OceanOptimism has reached more than 59 million people in the two years since I cohosted a workshop with Nancy Knowlton of the Smithsonian Institution and Heather Koldewey of the Zoological Society of London that launched the Twitter hashtag on World Oceans Day 2014.

We had no idea we were about to ignite a Twitter storm of hope. A few years before that workshop, the three of us had met and discovered a mutual passion for increasing access to ocean conservation solutions, and a shared concern about the way the marine environment was so often portrayed as being synonymous with “doom and gloom.”

Heather’s desire to source and share hopeful marine solutions arose from her concern about the tendency for scientists to publish problem analyses rather than conservation successes, a view that was shared by the late Navjot Sodhi and a team of prestigious biologists. “Widespread pessimism prevails in the conservation community,” they wrote in a 2011 issue of Trends in Ecology & Evolution. “What successes have been won are rarely highlighted or fail to attract wide attention.” Heather travels extensively in her role as the Zoological Society of London’s head of marine and freshwater conservation programs. She frequently encounters marine conservation practitioners working in isolation without access to proven approaches. 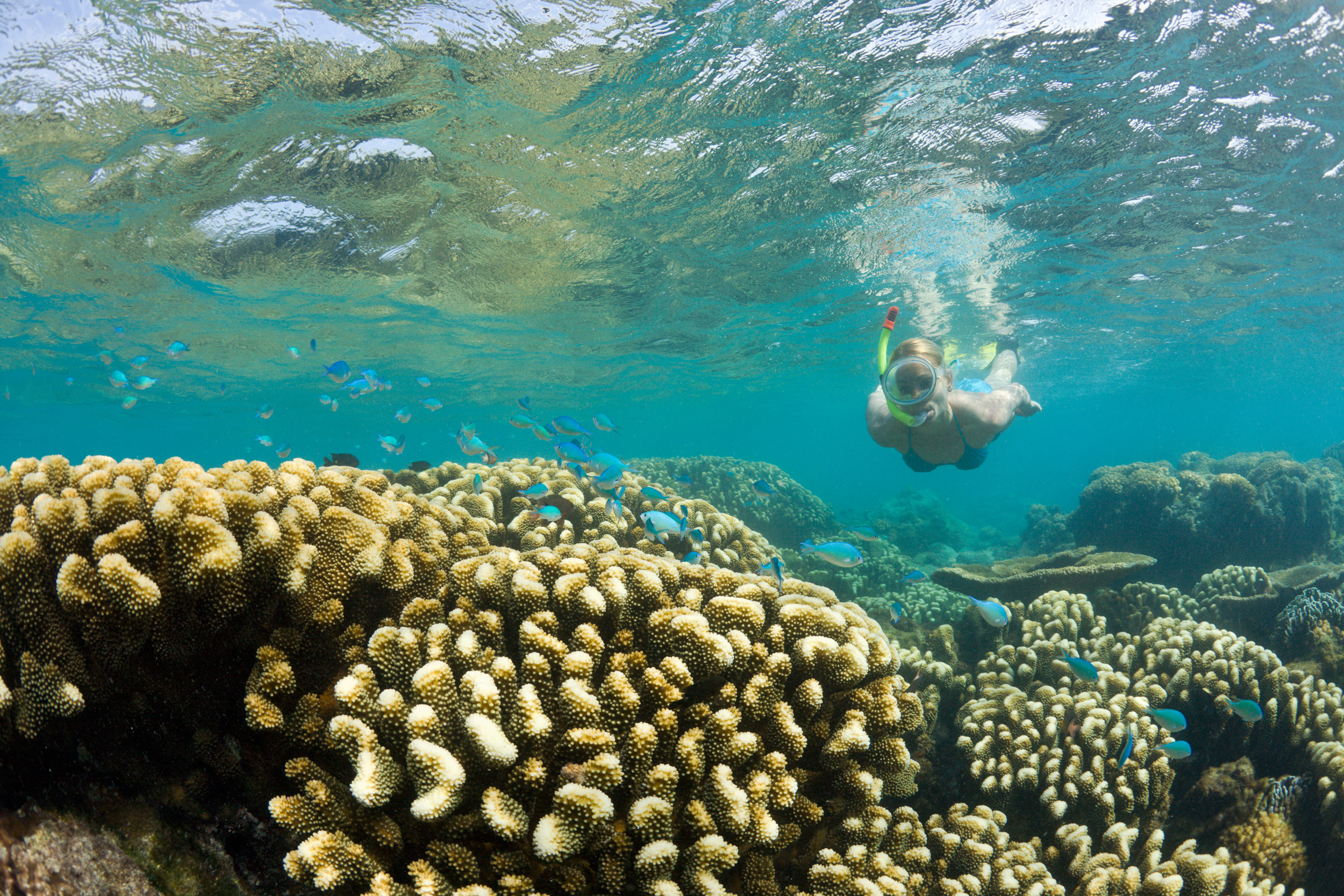 Although it was the site of repeated nuclear tests in the 1940s and ’50s, the coral reefs at Bikini Atoll in the Marshall Islands are thriving. Photo by Reinhard Dirscherl/Alamy Stock Photo

Nancy’s interest in focusing on hopeful solutions stemmed from witnessing the impact of doom and gloom on the marine science graduate students she taught, and on the field of marine science more broadly. “An entire generation of scientists has now been trained to describe, in ever greater and more dismal detail, the death of the ocean,” she wrote in an article with her husband, the noted marine scientist Jeremy Jackson. In an attempt to balance that view, Nancy hosted what she called “Beyond the Obituaries” sessions at major international science conferences. Scientists were invited to only share conservation success stories. She thought a few people might show up. To her surprise, the sessions were packed.

For me, the impact of doom and gloom on kids, in particular, came as a shock. For years, I had worked with aquariums, museums, and international environmental organizations, creating strategies to engage people with marine issues. As an academic, I understood the national statistics about what people in many different countries knew and what their attitudes were toward climate change, overfishing, and other problems. But how all that “knowing” felt was nowhere to be found in that vast pool of information.

I realized that omission when I was invited to speak with young people attending a United Nations children’s conference on the environment in 2008 in Stavanger, Norway. The participants, who ranged in age from 10 to 14 years old, came from more than 90 countries and a wide range of socioeconomic backgrounds. “How do you feel when you think about the environment?” I asked. I don’t remember what I expected them to say, but so many of them expressed such a chilling sense of dread that I felt powerless to comfort them. I knew exactly what they meant. I, too, often felt despair about the state of the world. I just never imagined such feelings were shared among children living in vastly varied circumstances.

Global dread, eco-anxiety, environmental grief—despair about the future of the planet has garnered many labels in recent years. In our noble zeal to emphasize the urgency and enormity of environmental issues, we may inadvertently be raising a generation that feels hopeless about the future of the planet. Studies within the past decade from the United Kingdom, Australia, and the United States find a quarter to a half of children surveyed are so troubled about the state of the world, they honestly believe it will come to an end before they get older.

Those of us who work with marine issues are often reluctant to talk about the environment in hopeful terms, for fear it might be taken as saying it’s okay to continue the appalling degradation of the seas. “Don’t worry about PCBs, my friend. The ocean will heal itself!” That sort of thing. We worry that highlighting species recoveries will play into the hands of climate skeptics, or reduce political pressure for much-needed environmental reforms.

But what we fail to take into account is the collateral damage of apocalyptic storytelling.

Hopelessness undermines the very engagement with marine issues we seek to create. According to researchers at Columbia University’s Center for Research on Environmental Decisions, there are limits to the amount of concerns we can deal with at one time. They call it the “finite pool of worry.” Overburdening people’s capacity for worry with too much doom and gloom leads to emotional numbing. When we believe our actions are too small to make a difference, we tend to behave in ways that create the conditions in which those expectations are realized. By bombarding people with bad news about the oceans at scales that feel too large to surmount, we cause them to downplay, tune out, or shut down. Hopelessness is a self-fulfilling prophecy. 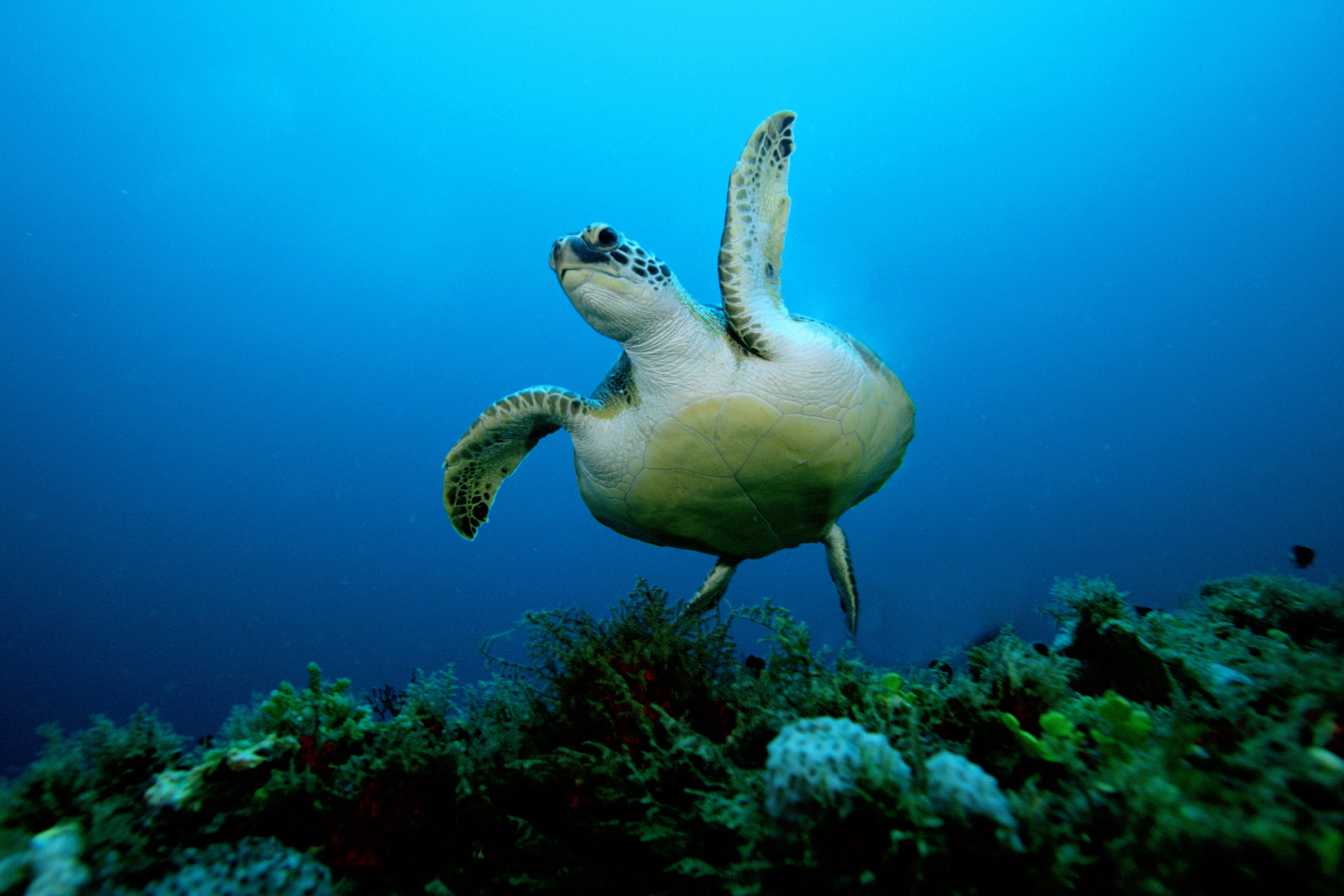 Decades of conservation work in Florida and Mexico mean that breeding populations of green turtles are no longer threatened with imminent extinction. This recovery is one of many examples of uplifting news from the sea that has fueled the #OceanOptimism movement. Photo by Mark Conlin/Alamy Stock Photo

Whenever I speak about hope and the environment, someone invariably argues that marine issues are so dire, we need to scare people straight. It’s true that fear-based messages can be effective for simple, short-term, very specific behavior-changing interventions, such as convincing people to use seat belts, according to a comprehensive review of research published by the American Psychological Association in 2015. But fearmongering isn’t the answer for broad, complex, emotion-laden, societal-level issues. As research from the Yale Project on Climate Change Communication suggests, our beliefs, emotions, interests, as well as our cultural perceptions of risk and trust all influence how we respond to environmental issues.

Emotions, it turns out, are contagious. We “catch” hope from the hopeful actions of others. We don’t even have to be face to face. A 2014 study involving nearly 700,000 participants conducted by social scientists at Cornell University; the University of California, San Francisco; and Facebook found that emotions spread among users of online social networks.

And unlike in mainstream media, where bad news dominates environmental headlines, hope travels faster than doom on social media. Given that one out of every five people on Earth has an active Facebook account and hope is contagious, the capacity for replicable marine solutions to spread between the millions of people using social media is formidable.

Four years ago, I gave a keynote address to the International Aquarium Congress at their biennial meeting in Cape Town, South Africa, where I asked aquarium directors from around the world to help me create a global torrent of hope for the oceans. Heather walked up to me after that talk and offered her support. That simple action led to gatherings with Nancy, Cynthia Vernon (chief operating officer at the Monterey Bay Aquarium), marine campaigner Elisabeth Whitebread, and others, which resulted in the workshop where #OceanOptimism emerged. Heather went on to inspire hundreds of marine scientists to live tweet solutions based on their research findings from the International Marine Conservation Congress in Glasgow, Scotland. Nancy brought #OceanOptimism to the Vatican when she spoke at Pope Francis’s sustainability workshop. The Huffington Post, the World Bank, and thousands of other users now use the hashtag.

The momentum for hope for the oceans just keeps growing. In 2015, BBC and PBS created Big Blue Live, a multiplatform live series celebrating the remarkable conservation success story of Monterey Bay, California. Nearly five million viewers watched the program the first night it was aired on BBC One, making it the top-rated show in the United Kingdom that night. “I laughed, I cried, and, at the end, I wanted to know more and was filled with hope,” blogged movie critic Jana Monji on rogerebert.com.

What I have learned from #OceanOptimism is how resilient ocean ecosystems can be. The recovery of Bikini Atoll reminds me that life is complicated. Things get horribly wrecked. That is true. But the remarkable capacity for renewal is true, too. Bikini is broken and beautiful, green sea turtles now swim where they haven’t for decades, and the ocean can still take my breath away. Far from making us complacent, stories of resilience and recovery fuel hope. Feeling hopeful enhances our capacity to take meaningful action. And that action flourishes in the supportive community of others.