Sea urchin meat, or uni, has long been a delicacy in Japan, and its popularity is growing in North America. Photo by John De Mello/Alamy Stock Photo

I sat at a sushi bar in San Francisco, California, staring at the chef’s display of tuna, salmon, red snapper, scallops, and eel, when something unfamiliar caught my eye: a wooden box filled with what looked like small, yellow-orange fillets. “What are they?” I asked the chef.

“Uni,” he replied, using the Japanese name for sea urchin meat. “Try one. They’re really special.” A few minutes later, he placed a piece of nigiri topped with urchin flesh in front of me and watched me take a cautious bite. I adored that first hit of brine on my tongue, followed by the uni’s rich, sweet taste. And that was it; I was hooked on urchin before I even realized I was eating its reproductive organs.

Two decades later, foods that once seemed exotic in North America—sushi or Vietnamese pho, for instance—have gone mainstream. Sea urchins? Not so much. In his acclaimed television series, Parts Unknown, late chef Anthony Bourdain described the sea urchin meat he ate in Newfoundland as “little plump sacks of goodness.” But the celebrity endorsement did little for the delicacy’s popularity in North America. Victoria, British Columbia, where I live, is sea urchin central. Both red and green urchins are harvested commercially in our coastal waters, yet it’s rare to see them on a menu or for sale at a fish counter. I have spent years mystified by this fact.

Granted, sea urchins look less like food and more like medieval weapons. Green sea urchins are kiwi-colored and about the size of a mandarin orange, while red sea urchins are grapefruit-sized and range in color from reddish brown to beet red to deep burgundy. Sea urchins have a bulbous carapace covered in sharp spines, some as long as a pencil. They propel themselves with five rows of feet hidden in these movable spines, mowing and munching their way through kelp forests like armies of windup toy soldiers. 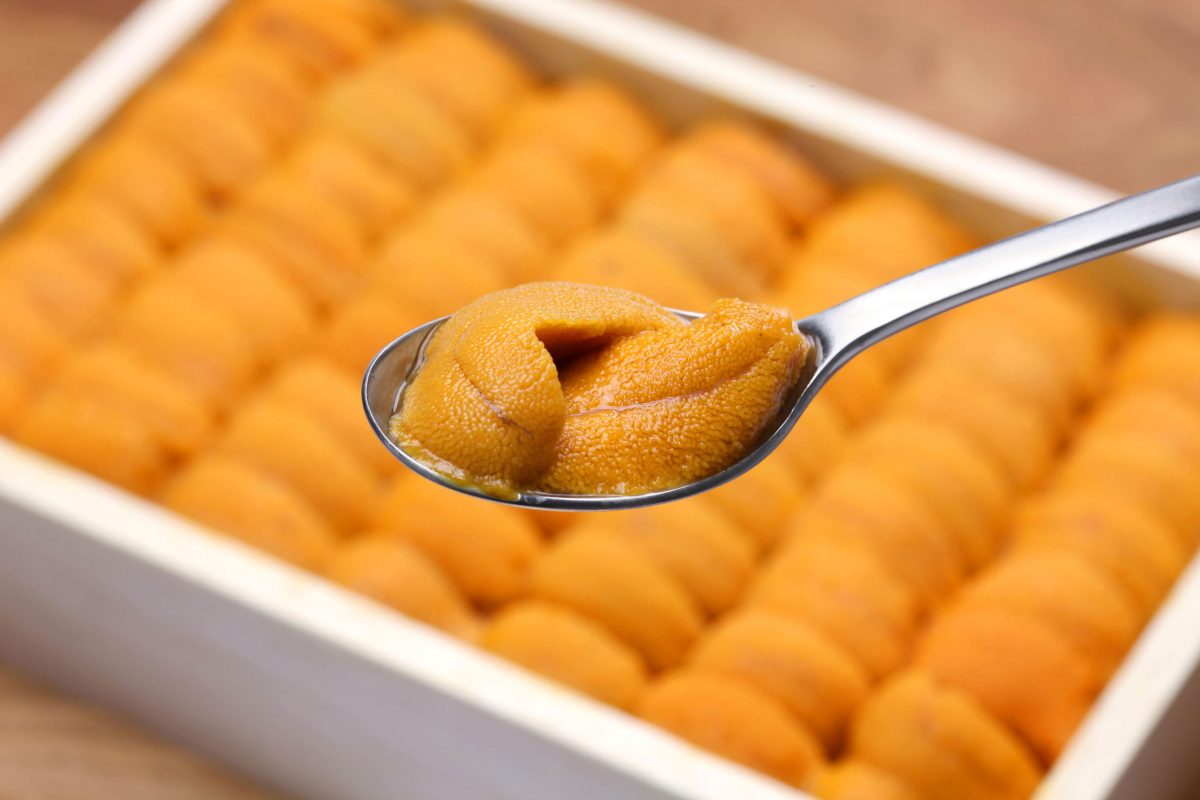 Good luck finding a box of sea urchin gonads at a grocery store in Canada. Up to 95 percent of the country’s catch is exported to Asia. Photo by Kyoko Uchida/Alamy Stock Photo

Despite any unease you might have about eating the creature’s reproductive organs, they boast many health-giving properties. Sea urchin meat is low in fat, high in protein, and contains healthy omega-3 fatty acids, iodine, and zinc. Even the various cultural mythologies that surround sea urchins uniformly recognize them as formidable characters. The Danes thought they were thunderbolts and used them to ward off lightning and witchcraft, while in the Celtic tradition, sea urchins, or “serpents’ eggs,” symbolized life force and the primordial seed. On the west coast of Canada, some Indigenous peoples call them “sea eggs” and value them for their nutritional and medicinal qualities. According to a Kwakiutl legend, if a spirit eats from an empty shell, the person who cleaned it will become ill.

Sea urchin consumers are numerous. Crabs, eels, fish, sea otters, and other predators dine on a number of the 1,000 or so types of sea urchins around the world. Then there are the human predators. Commercial divers pluck urchins from the seafloor or from kelp beds by hand or with a small rake. The work requires a specialized knowledge of sea urchin habitats and an ability to navigate ocean currents.

Green urchins are known for their small, sweet-tasting gonads, while giant red sea urchins offer larger, firmer meat. There’s no crystal ball to tell chefs how good the gonads are in any given shipment. Just as terroir imparts a signature flavor to wines, gonad quality depends on a variety of factors, including “merroir,” the watery environment where sea urchins mature. And just like wine, the only true way to test quality and flavor is to open a sea urchin and taste it. Still, the sea urchin industry has its standards and rates animals by a gonad index (GI), which represents the ratio of gonads to body weight. The higher the GI, the more money the urchin can fetch on the commercial market. In BC waters, the best tasting gonads are harvested from October to May.

The Japanese have by far the biggest appetites for sea urchins, consuming 80 to 90 percent of global supply. The country’s annual demand has been estimated at about 50,000 metric tonnes, but due to declines in its own fishery, only about 8,000 to 10,000 tonnes are caught domestically. British Columbia experienced some of its own declines in the mid-1990s, but today, its fisheries are healthy and sustainable. The province produces more than half of Canada’s total sea urchin catch of approximately 6,000 tonnes, but according to Fisheries and Oceans Canada scientist Christopher Pearce, an estimated 90 to 95 percent of this catch is exported to Asia. This reality is difficult for me to swallow. Imagine if the French couldn’t purchase wine from their own vineyards, or if the Swiss couldn’t savor a piece of their own milk chocolate. Pearce is empathetic: “I would buy sea urchins on a regular basis, if only they were available,” he says. “I love their color, texture, and sweet-salty flavor.” 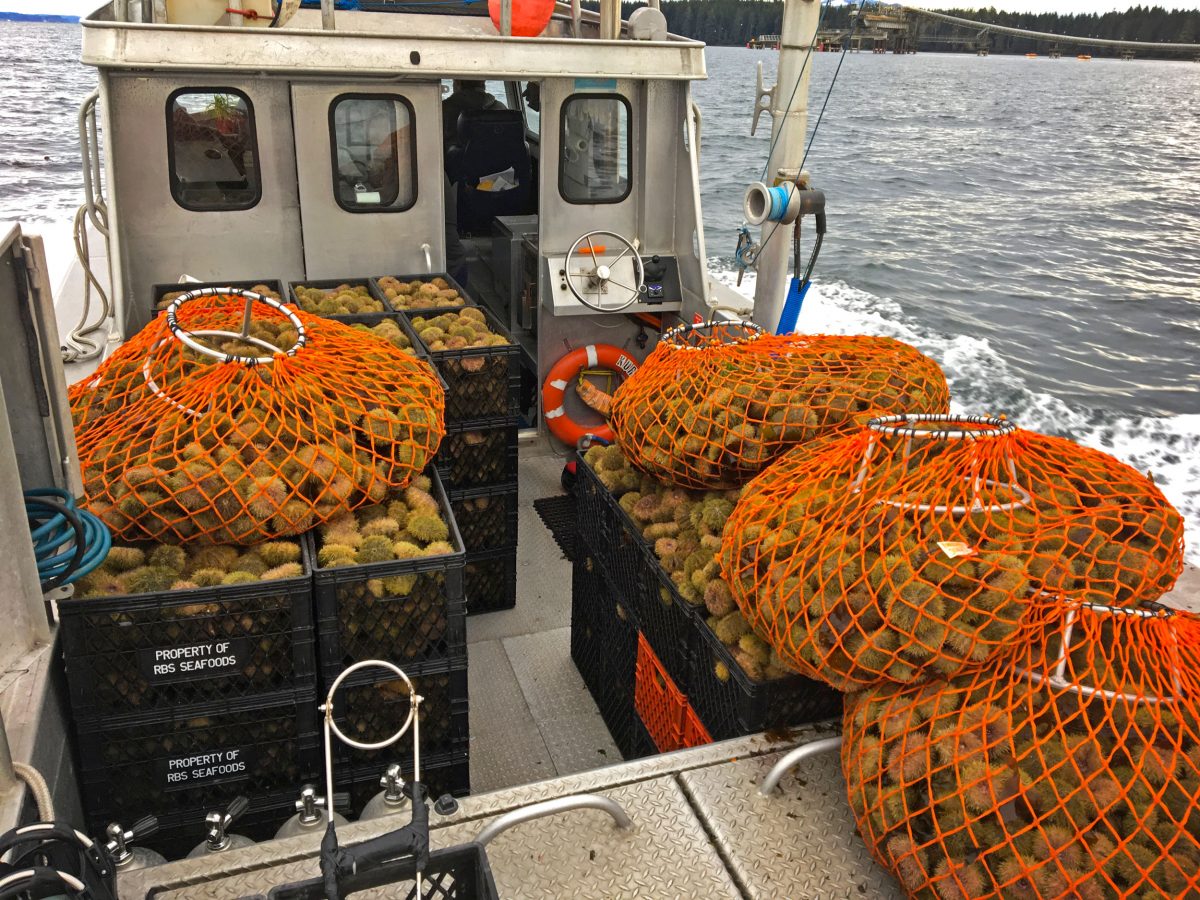 Crates and mesh bags full of fresh green sea urchins come in on the Kuroshio, a dive vessel based in Victoria, British Columbia. Photo by Scott Pedersen

At least I now know why local sushi bars rarely have uni when I ask for it. Determined to taste this local product, I decide to try sourcing my own raw sea urchins. I call up Finest at Sea, a seafood store perched across the road from Victoria’s Fisherman’s Wharf. Retail manager Rose Brewer explains that the store doesn’t always stock sea urchins. “Sea urchins are still a niche market, and they’re also extremely perishable,” she says, adding that she’ll try to find me some. I promise I can be patient.

A few weeks later, she calls me with the good news: a boat is on its way in with a catch of green sea urchins. I rush down to Fisherman’s Wharf and wait for her on the dock. Finally, I spot her, walking toward me carrying a few prickly green sea urchins. Using a pair of kitchen shears, Brewer carefully inserts one blade into the underside of the urchin at the creature’s mouth. She cuts through one side and then the other, and pulls the shell open until she holds two halves in her hands. Then she scoops out a bright-orange piece of meat with her fingers and hands it to me.

So close to its life in the ocean, the sea urchin tastes sweeter and more delicious than anything I’ve ever tasted in a sushi restaurant. The texture is light, almost frothy. I even feel a tingly sense of euphoria. Here’s why: aside from the quick dose of protein and minerals, the gonads also contain arachidonylethanolamide, a psychoactive cannabinoid. With that intoxicating sample, Brewer increases my desire for fresh sea urchins tenfold.

Rose Brewer, retail manager at Finest at Sea in Victoria, demonstrates how to pry open a sea urchin and slurp up its gonads.

After my oceanfront appetizer, I challenge Brewer to find me enough urchins to prepare a pasta dish. Again, patience is required. Finally, she emails me to say that she has live urchins coming. Commercial fisherman Scott Pedersen delivers 45 kilograms of red and green sea urchins to her, straight off the Kuroshio, a sea urchin dive vessel named after the current that runs off the coast of Japan. “It doesn’t get much fresher than that,” Brewer says.

Brewer dons a pair of gloves and cleans 10 green and two red urchins for me, cutting each shell in two and then gently rinsing each piece of meat in cold water before packing it into a plastic container on a bed of damp paper towels. “There’s nothing like eating sea urchin straight out of the ocean,” Brewer says. “It’s like eating a ripe strawberry that you just picked.”

Twenty minutes after I arrive home with my precious catch, I bring my first sea urchin pasta dish to the table. I wish I’d had time to gather a group of friends to dine with me to help increase local demand for this delicacy. As I savor the tangy flavor again, this time married to a mellow lemon cream sauce, the experience is bittersweet. I can’t help but wonder when I will taste sea urchin again. Raw or cooked, this delicacy has imprinted itself on my culinary cortex.

There is hope, I console myself, sopping up the last bit of sea urchin sauce with a scrap of French bread. Fisheries and Oceans Canada reports that the domestic market for sea urchins, though small, is increasing. I will keep searching for urchins, and should a dive vessel appear on the horizon, I hope Rose Brewer has my number on speed dial. In the meantime, maybe a field trip to Japan is in order … perhaps there I can get my fill of BC sea urchins. 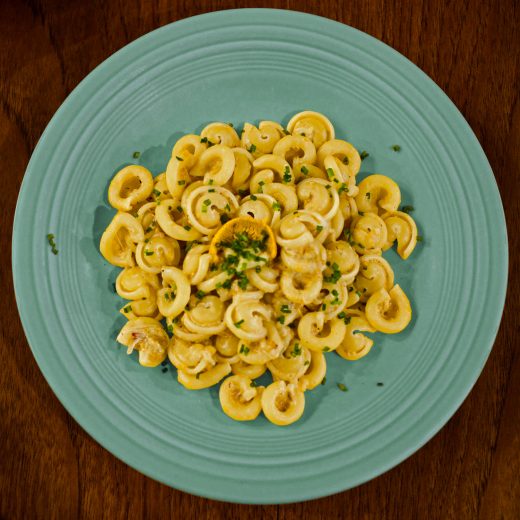