This article was originally published on July 15, 2021, in High Country News, a magazine about the American West’s environment and communities. Read more stories like this at hcn.org.

Devin Smith wasn’t impressed as he looked out across the stagnant water of Barnaby Slough, a pond near the edge of the Skagit River in northern Washington State. “Steelhead like fast-moving water,” Smith said, a steady May rain pelting his glasses. The slough, however, was more like “a big bathtub.” Smith is the habitat restoration director for the Skagit River System Cooperative, a natural resources consortium of the Swinomish Indian Tribal Community and the Sauk-Suiattle Indian Tribe.

Barnaby Slough hasn’t always been such a bad place for young fish. Over a century ago, this valley of towering cedars and moss-drenched maples was one of the most productive salmon habitats in the entire Pacific Northwest. Back then, the Skagit River meandered across the valley floor in a maze of waterways, which exist today as glades etched into the forest, and Barnaby Slough was the river’s main stem. The complex network of side channels this produced protected young salmon from heat and predators. But by the 1940s, the Skagit River had straightened and separated from Barnaby, cutting off hundreds of acres of salmon habitat. Eventually, Washington State added small barriers to turn the slough into a fish-rearing pond, further isolating it. Today, the river remains detached from the surrounding fish habitat, and scientists are wondering why. 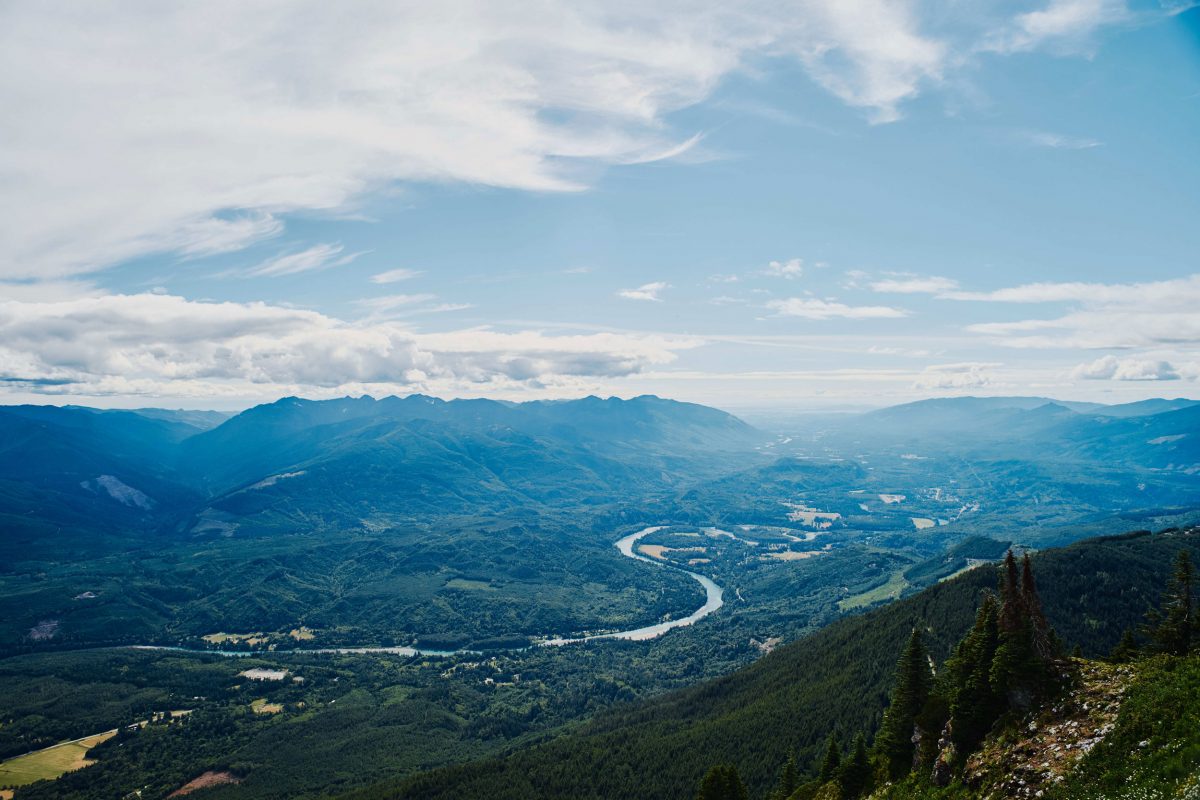 The Skagit River flows from its headwaters in southwestern British Columbia to the ocean at Puget Sound, Washington. Photo by Stephen Klise/Shutterstock

Seattle’s three Skagit River dams, approximately 40 kilometers upriver from Barnaby, are a likely culprit. Commissioned between 1924 and 1952, they generate roughly 20 percent of Seattle’s power. But they also limit the river’s seasonal flooding and starve it of the sediment and fallen trees that would naturally raise its water level and help salmon access side channels. Now, researchers want to know: could the Skagit and Barnaby reconnect if the sediment currently locked behind the dams was released into the river?

That question could soon be answered. Seattle launched over US $20-million worth of studies this summer as part of the federal process to renew the dams’ licenses, which expire in 2025. These studies will catalog how the dams are hurting the ecosystem, including protected salmon populations, which have plummeted in recent decades. They’ll also help determine what the city must do to mitigate those effects. As Seattle applies for a new license that could last as long as 50 years, the latest science is showing that the dams may not be compatible with a healthy river.

Federal scientists are already convinced that Seattle’s dams are harming local salmon and killer whale populations. Two of the river’s salmon species, Puget Sound chinook and Puget Sound steelhead, and the river’s bull trout are listed as threatened under the Endangered Species Act, while a third salmon species is a species of concern. The local resident killer whale population, which almost exclusively eats chinook salmon, is sliding toward extinction, with only 74 individuals left. While other factors are also to blame—mining operations, highway construction, and farming have all damaged the river’s health—the National Marine Fisheries Service (NMFS) wrote in October 2020 that Seattle’s current dam operations are “not adequate to support survival and recovery” of the protected species.

Seattle’s early decisions in the relicensing process generated widespread condemnation from state, federal, and tribal governments. Seattle City Light, the city department that manages the dams, spent the last two years refusing dozens of study requests from regulatory agencies on topics such as how the dams impact the river’s estuary, side-channel salmon habitat, fish passage, and key water-quality standards. This spring, however, the utility changed course, and in June it agreed to many studies it had earlier rejected, although it continues to deny a request from the Upper Skagit Indian Tribe to look at removing the Gorge Dam, the city’s lowest and oldest dam on the Skagit River. 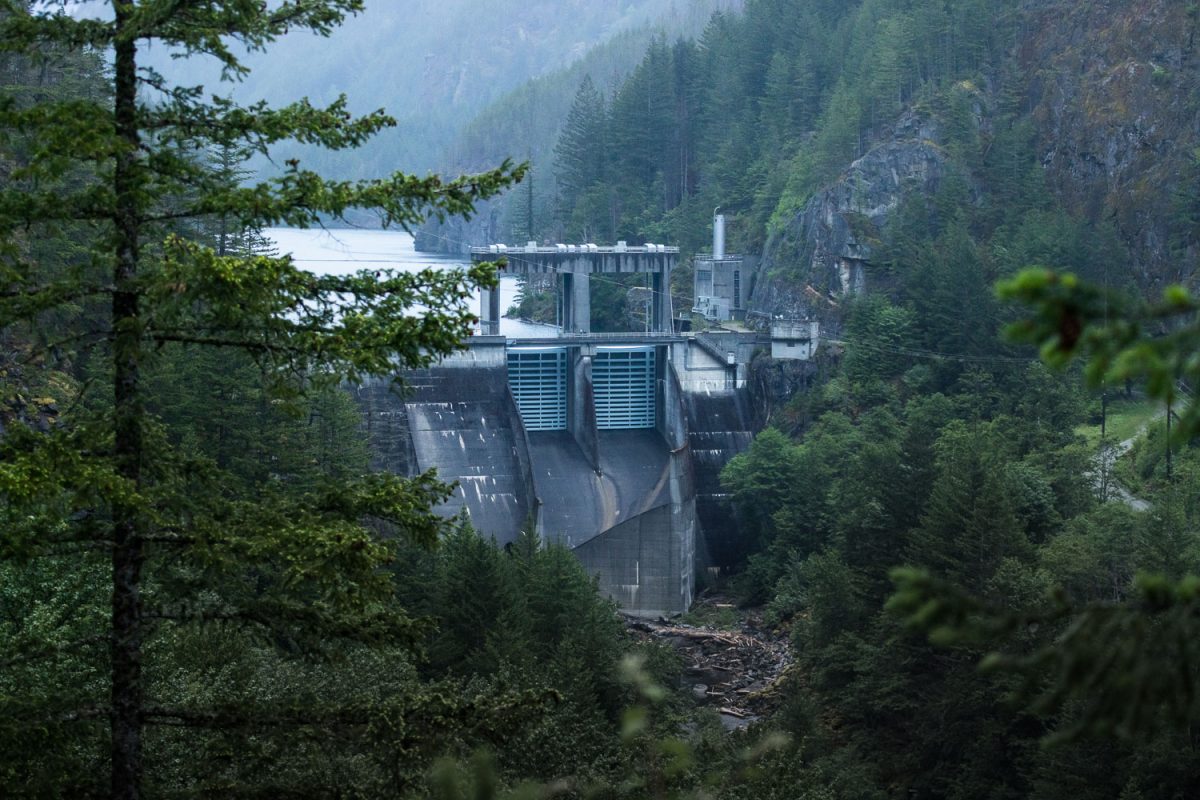 The Gorge Dam, the oldest of the three hydroelectric dams on the Skagit River, is in an area known as the Valley of the Spirits. Photo by David Moskowitz/High Country News

Scientists now are working across the entire watershed to understand the dams’ impacts through dozens of studies, from installing new thermometers that will measure water temperature fluctuations below the dams to surveying how often trout in the city’s reservoirs are killed by the dams’ turbines. Researchers will also attempt to quantify how much sediment the city’s three reservoirs hold. That, combined with a new pilot program to release sediment into the river, should help them figure out how to reconnect the side-channel habitat at Barnaby Slough—and perhaps bring salmon back to the area.

One of the most contentious questions facing Seattle’s dams is whether the concrete barriers prevent salmon from reaching the Skagit River’s glaciated headwaters in North Cascades National Park. Seattle City Light has long maintained that a steep section of riverbed littered with cabin-sized boulders 3.2 kilometers below the Gorge Dam—and not the dam itself—thwarts spawning salmon. Federal agencies, however, have said the city hasn’t identified any rocks that would actually qualify as a barrier to the fish.

The Upper Skagit Indian Tribe’s own history confirms that fish could spawn above this section. The tribe wrote in an October 2020 Federal Energy Regulatory Commission (FERC) filing that its scientists had documented the presence of salmon upriver of the rocks the city claims block the fish. Two months later, Seattle City Light dismissed the tribe’s evidence, writing that it was “inappropriate to engage in conjecture” about fish passage. But in April this year, a crew of scientists from the Washington State Department of Fish and Wildlife and the National Park Service found an entire school of approximately 50 young coho salmon above the alleged barriers—implying that at least two adult fish were able to swim past the boulder field and reproduce.

About 20 percent of Seattle’s electricity is generated by the three hydroelectric dams on the Skagit River. Photo by Mihai Andritoiu Creative/Alamy Stock Photo

Chris Townsend, Seattle City Light’s director of hydroelectric operations and FERC relicensing, defended the utility’s actions by pointing out that the Fisheries Service had determined as recently as 2012 that natural barriers were impeding salmon. The agency has since reversed that position, however, and also asserted that resident killer whales won’t survive without changes at Seattle’s dams. Townsend also said that his department has agreed to test its natural barrier hypothesis with a computer model, and to study the feasibility of providing fish passage past all three of the city’s dams. “It’s a new day, we have new tools, and we have agreed to model the optimal flows for anadromous fish passage,” Townsend said. “If it shows that we need to do fish passage over one or more of the dams, we will do that.”

Building fish passages would likely cost millions of dollars. In 1996, during the relicensing of the Condit Dam on the White Salmon River in southern Washington, FERC required the dam’s owner, PacificCorp, to install fish passage technology. But rather than pay for the expensive improvements, PacificCorp removed the dam in 2011.

Regardless of what FERC ultimately decides for the Skagit, the science on the risks the river faces—and the regulatory agency decisions driven by that understanding—has changed since the current license was issued in 1995. During that relicensing process, the Washington Department of Ecology voluntarily waived its right to analyze how the dams affect the river’s water quality, and the NMFS didn’t even request studying fish passage at the city’s dams.

Lorraine Loomis, the fisheries manager for the Swinomish Indian Tribal Community, said the decline of the river’s salmon since 1995 is painfully obvious. “We had salmon then. We don’t now,” she said as she sat at an old picnic table on her tribe’s reservation near the mouth of the Skagit River, the smell of salt water hanging in the air. The river’s nearby estuary is a grassy maze of tidal wetlands that protect young salmon from predators, just like the woody side channels 113 kilometers upriver at Barnaby Slough. 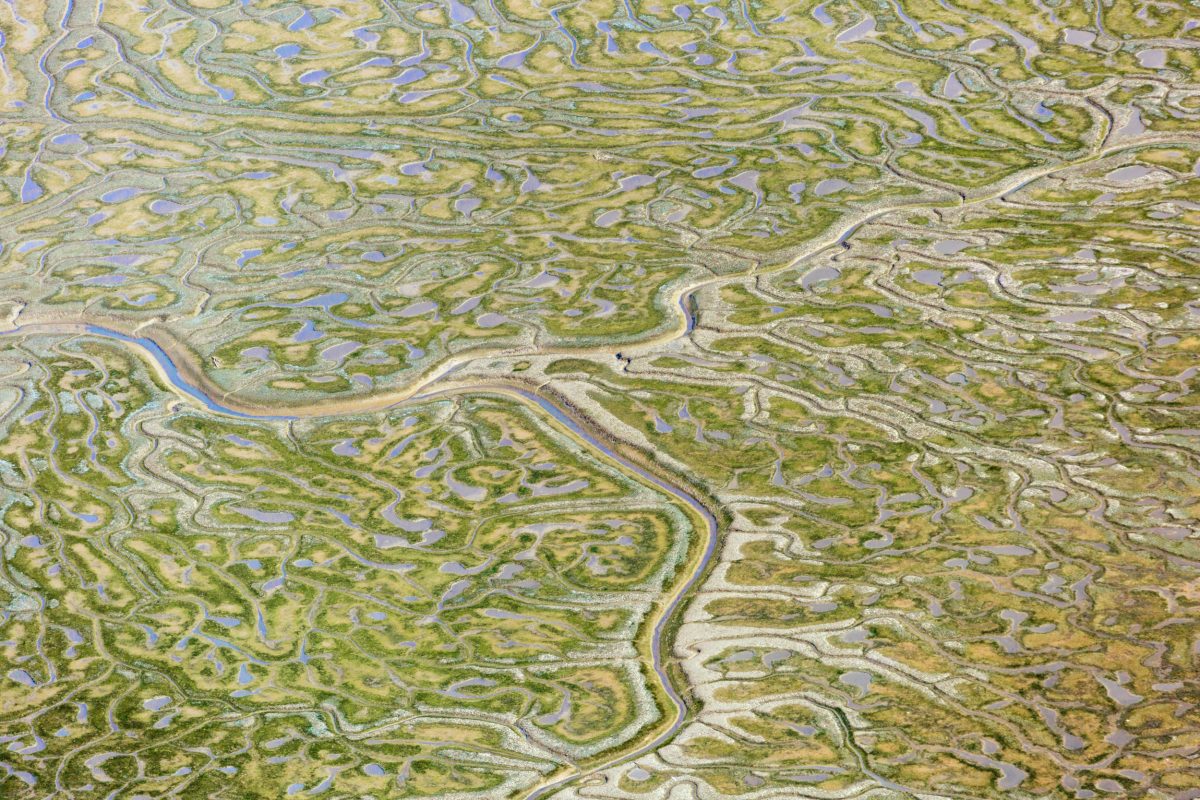 The tidal flats of the Skagit River estuary are maze-like wetlands that provide critical habitat for juvenile salmon and other species. Photo by John G. Wilbanks/Alamy Stock Photo

Loomis compared these environments to hotels: they give salmon a place to stay and grow stronger before they swim to the sea. But now, “there’s not enough hotels along the river anymore,” she said, leaning forward, her hands on the picnic table’s rough boards. “So rather than stay at some place to grow a little, they keep on going down the river and then go out to sea, and they can’t survive.”

The Swinomish are fighting for additional research—studying how sediment impacts the estuary habitat, for example—because the shrinking salmon stocks are threatening both their treaty-protected fishing rights and their very way of life, Loomis said. “We have to make sure we do everything possible to recover the salmon.”