The lionfish glides along the sandy reef bottom. Its flamboyantly dotted fins flutter like a lion’s mane as it moves. It seems untroubled as cameraman Jim Hart, of the non-profit organization Lionfish University, points a dive light and camera at it. The lionfish seems equally untroubled as a big, brown Nassau grouper glides into Hart’s frame and begins pursuing it. The only sound is the gentle gurgling of water moving about the camera, punctuated by Hart’s raspy underwater breathing. These are familiar sounds here in the Cayman Islands, where exceptionally clear water draws divers to the abundant coral reefs—and their fish. Suddenly, the grouper twists and snaps and removes the head of its prey, and then it gulps the rest of the body. The lionfish vanishes from view.

This is the first known footage of a grouper, a native Cayman species, hunting and devouring a lionfish, an invasive one.

Since exotic pet owners first dropped the striped fish, native to the Indo-Pacific, into the waters off the Florida coast in 1985, lionfish have spread from Cape Hatteras through the Caribbean Sea to the Gulf of Mexico and even to Brazil. They made ideal invaders, devouring a wide range of species—some more than half their body size—and reproducing with rabbit-like rapidity. Even worse, they seemed to have no natural predators. From eels to snapper to sharks, no native predators seemed to want to eat them. Unchecked, lionfish decimated native marine life and coral-reef ecosystems wherever they appeared. Today, they threaten the diving and tourism industry that’s the lifeblood of places like the Caymans.

Despite years of counteroffensive efforts, the sheer numbers of lionfish mean they are probably here to stay—the question is whether they’ll destroy these ecosystems or somehow become a part of them. Hart’s footage suggests for the first time that the latter might be possible.

Grand Cayman sits in clear blue water about 430 kilometers south of Cuba, surrounded by rich coral reefs. Just 35 kilometers to its northeast sits diminutive Little Cayman, which has no ports, rivers, or industries. At 16 kilometers long, the island has only one main road, and there are only 170 year-round residents.

Kristi Foster is the assistant director of research at the Central Caribbean Marine Institute (CCMI) on Little Cayman. She stands on the institute’s deck overlooking the ocean, gazing at a reef across the water and pointing as a sea turtle momentarily pokes its head above a cresting wave. Foster, tall with wavy brown hair and a broad smile, admits she never tires of the view; she practically vibrates with enthusiasm for all things marine, despite the grim task of studying how lionfish wreck reefs like the one outside her office.

“There’s a cascade effect,” Foster says, explaining how lionfish alter the coral-reef ecosystem. Parrotfish and other native species feed on algae and seaweed, which compete with corals for space on the reef. If the lionfish eat too many parrotfish and other herbivores, “the algae will grow unchecked and eventually we will lose our coral reefs,” Foster says. Clear water is also critical for zooxanthellae, photosynthetic algae that live symbiotically, and safely, within the coral. These algae provide the reef with oxygen while removing waste, keeping the coral healthy.

In the nearby Bahamas, lionfish reduced the number of smaller native fish on one patch of reef by 80 percent in just a few weeks. It’s for reasons like this that invasive species like lionfish cost up to US $1.4-trillion globally in damage each year. This amount includes the cost of controlling invasive species, restoring habitat, and repairing damage.

In the Caymans, there’s a direct line from environment to economics. Not only do the reefs protect against the hurricanes that frequently thrash the islands, but they drive the tourism industry that provides about 75 percent of the annual GDP. Chat with the locals—like the Caymanian-born-and-bred guide at a Grand Cayman distillery who, over shots of rum, declares with vengeance that when he goes out on dives he kills every lionfish he sees—and it’s clear they are concerned. 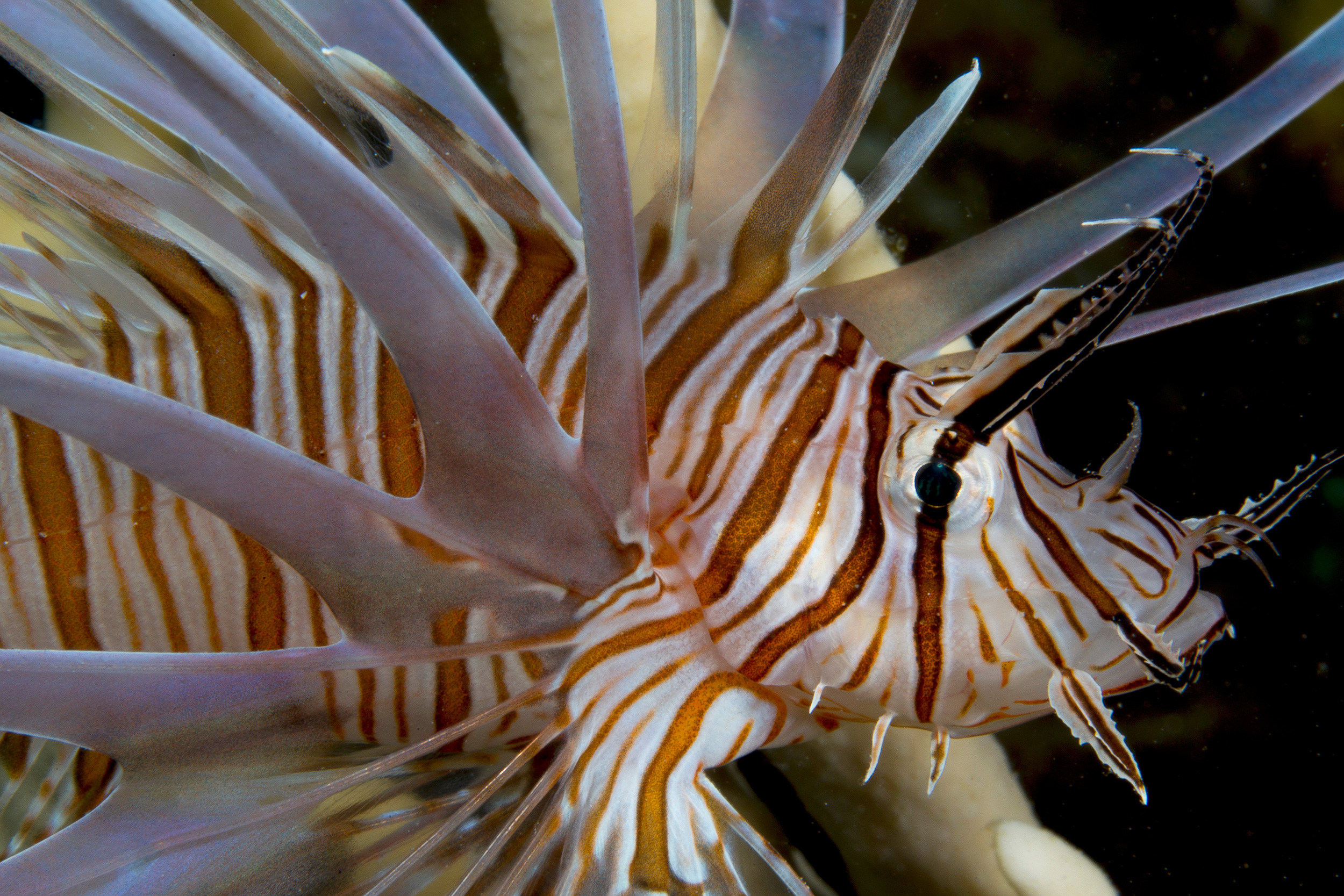 These flamboyant fish have venomous spines. Photo by Stephen Frink/Corbis

“The local remedy,” explains Quilliam, “is to stick your hand in the hottest water you can tolerate for as long as you can tolerate.” The heat breaks down, or denatures, the venom’s protein structure, easing pain. (Seeing a doctor is still a good idea—the pain can trigger cardiac arrest and the venom can cause necrosis.) Given the Caribbean’s $2.1-billion-a-year diving industry, the Cayman Islanders clearly had to fight back.

Scientists know that once invasive species take hold, they’re nearly impossible to eradicate. So efforts generally focus on keeping invaders at low enough numbers that the environment can tolerate the damage. This is true in the Caymans as well. In 2009, the Cayman Islands Department of Environment began training and licensing divers to cull, or harvest, lionfish with spears and collection buckets, taking cues from prior efforts in Florida and the Bahamas. The CCMI also organized a biweekly lionfish cull in 2009 with resorts on Little Cayman, enticing the island’s dive-savvy tourists to make these initiatives a part of their adventures.

The culling seems to be having an effect; Foster says her early data suggests that cull sites have 50 to 60 percent more native fish, and less algae, than sites without culls. But knowledgeable divers are limited, and they can only cull so many areas. In 2013, researchers found lionfish off the Florida coast as deep as 91 meters—recreational diving tops out at 40. In other words, culling is effective, but it could also be shifting the problem. 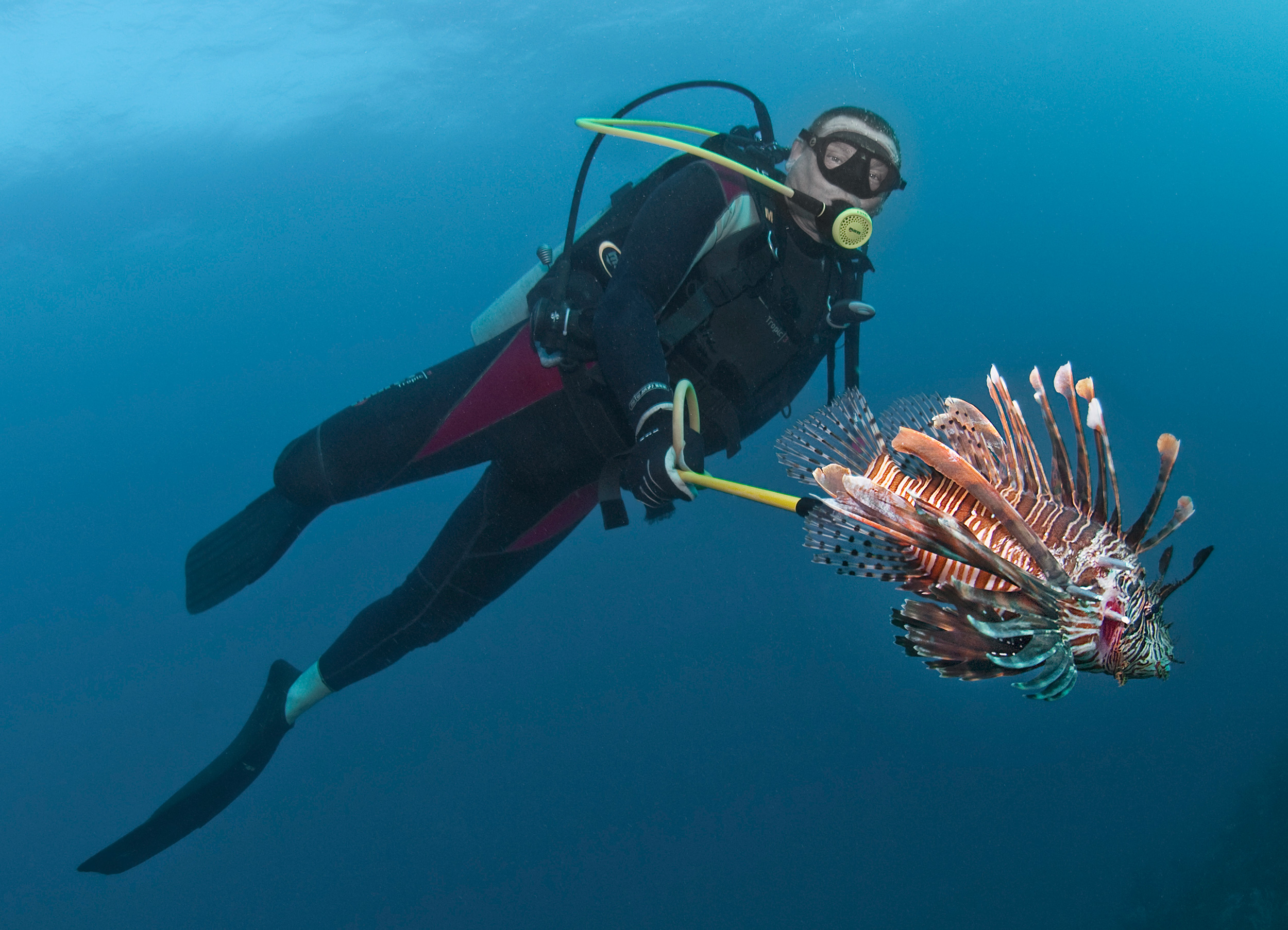 Worse, after spearing a lionfish, some cullers feed the corpse to potential predators instead of hauling it out of the water as required by law. That’s a problem because predators learn to associate food with divers. Now, in some places, snappers, groupers, and eels seem to be behaving more aggressively toward divers who are hunting them. “It creates a dangerous environment for divers,” says Quilliam. “Moray eels get quite big and have extremely nasty teeth, which face all the wrong way.” Their hooked rear teeth and lack of tongue gives them a maw familiar to viewers of the sci-fi movie Alien. Though culling seems to be keeping lionfish in check for now, human hunters are no replacement for natural predators.

That’s why Lionfish University’s footage, posted in February of this year, is exciting—it suggests that lionfish could find a new equilibrium in these seas independent of human intervention. The grouper’s behavior is no longer an isolated event: A diver photographed a reef shark hunting and eating a lionfish in April of this year. “If the predator fish can learn to hunt lionfish on their own,” says Foster, “unaided by people, some balance will come into play.”

It’s late in the day on Grand Cayman. Tall white cruise ships that earlier bobbed outside the island’s ring of coral have pulled anchor, loaded with sun-kissed tourists, bound for other ports. It becomes still as day descends to dusk—at least on land.

Below the surface of the island’s clear waters, lionfish stir, preferring to hunt at dawn and dusk. For years they’ve ruled these waters unchecked. But that’s starting to change. Maybe tonight something will hunt them back.