For years, the nesting location of the marbled murrelet, a small seabird, was enigmatic until nests were discovered in old-growth forests of the Pacific Northwest. Photo by Glenn Bartley/Minden Pictures

On the rolling seas two kilometers off the central Oregon coast, the early-morning doldrums shatter when the radio squawks to life: “We have a bird. We’re coming to you.”

It’s close to 3:00 a.m. aboard the R/V Pacific Storm, a trawler from Oregon State University (OSU). In the equipment-crammed lab, four people slumped around a large table rouse themselves. A technician steps out to the rear deck, “They’re almost here,” he says. “I can see their lights.”

Kim Nelson, a wildlife biologist from OSU and one of the lead investigators, arranges instruments necessary to perform an onboard surgery: calipers, pliers, needles, thread, rulers, a small steel band. Then she leans back in her chair and closes her eyes. She has been on the water since 6:00 p.m., and has no qualms about getting a little more rest before the marbled murrelet comes aboard. As dictated by their permit, her team will have just under an hour to extract the little seabird’s story via measurements, blood samples, a leg band, and a radio tag. The minutes will be precious with the rare and secretive bird—one that, despite decades of intensive and expensive interventions, has so far seemed to resist all efforts to be saved. 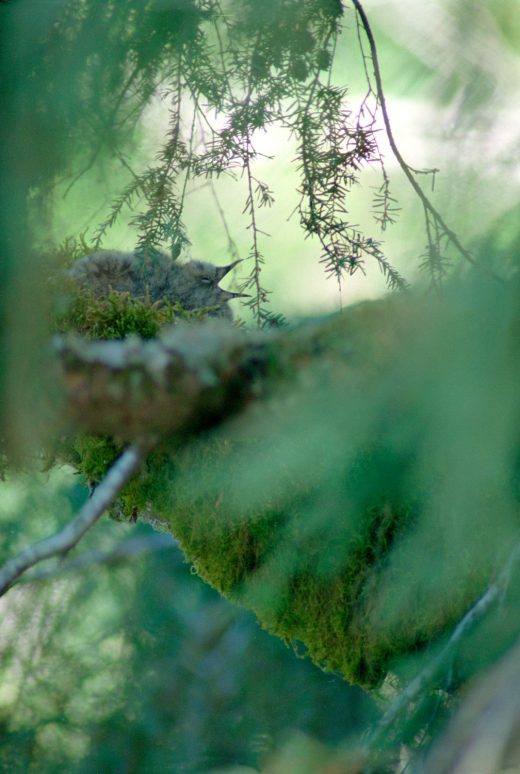 Marbled murrelets are unusual among seabirds in that they nest in trees. This chick calls from its nest, a bed of moss, in an Oregon forest. Photo by Mark Moffett/Minden Pictures

Marbled murrelets are dove-sized seabirds that range along the North American coast from southeastern Alaska to Northern California. They forage in marine waters, usually within a few kilometers of shore, diving for schooling fish such as sand lance, anchovy, or herring. Like puffins or murres, their close relatives, they are characterized by a stubbiness of body and wing. Unlike puffins or murres, they do not form breeding colonies, nesting nowhere near rocky headlands or islands.

But where murrelets nested was known to scientists only in bits and pieces for almost 200 years after the species was first described in 1789. Then in 1974, a tree surgeon climbed an enormous Douglas fir in California. Peering over a branch 45 meters off the ground, he saw a downy murrelet chick staring back, and realized he’d found the home of a bird often called the enigma of the Pacific.

Marbled murrelets lay their eggs on mossy beds among the broad upper limbs of old-growth conifers. But they are not alone in their preference for tall, ancient trees in North America’s coastal temperate rainforests. These western forests have been harvested widely and with the trees went the murrelets. Following steep population declines in the wake of logging, the species was listed as threatened in British Columbia under the Species at Risk Act in 1990. Two years later, it was listed as threatened under the Endangered Species Act in California, Oregon, and Washington.

It was partially with the murrelets’ dire straits in mind that broad restrictions were placed on old-growth logging across 9.7 million hectares of federal land in the United States under the 1994 Northwest Forest Plan; individual states also curtailed the harvest on their lands to a lesser extent. In British Columbia, more than a quarter of nearly two million remaining hectares of suitable murrelet nesting habitat is on protected land.

But the murrelets’ numbers haven’t climbed in response. The combined California, Oregon, and Washington population, with fewer than 20,000 individuals, continues to decline by as much as four percent per year. In British Columbia, where there may be closer to 100,000 murrelets, the population is declining by 1.6 percent per year. Even in Alaska, home to the greatest number of murrelets, scientists believe the population has declined by 71 percent since the 1990s, from around one million birds down to 270,000.

Concerned that more could be done for the murrelet in Oregon, conservation groups petitioned the state department of fish and wildlife in June 2016 to upgrade the species from threatened to endangered. While the recent petition compels Nelson and her team’s work in part, at the root they are struggling with a problem that has bedeviled researchers for almost 30 years, as they try to determine what it’s going to take to slow the murrelets’ decline. Or perhaps even reverse it.

The Zodiac pulls alongside the Pacific Storm and someone passes over what looks like a blue to-go container. Strung through the handle is a stopwatch, started a few moments after the murrelet was captured. Technician Jennifer Rothe takes the box. “Come here, you,” she says softly, pulling out the murrelet, which nips at her. The bird fits easily in her hand and she gently pins the wings down with her fingers. Its plumage is subtle, a mottled gray and brown; its eyes dark and shining. 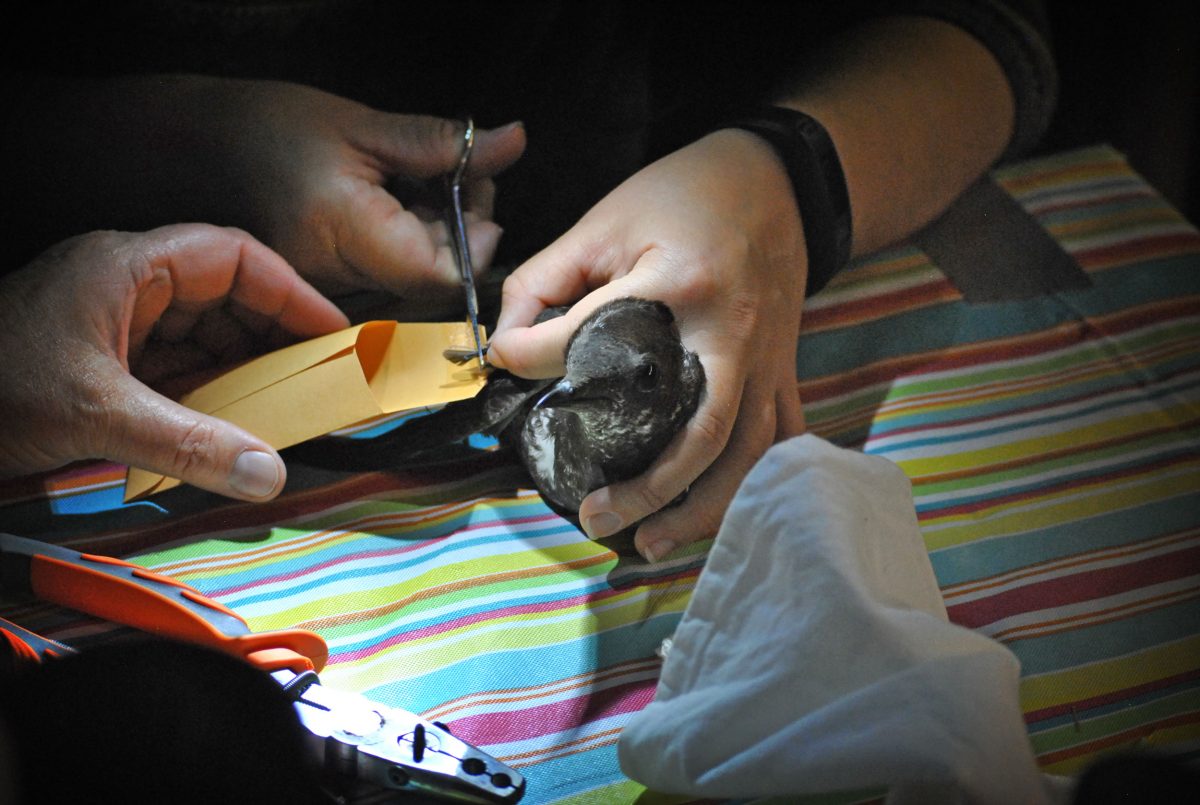 A researcher snips a breast feather from a marbled murrelet aboard the RV Pacific Storm. The feather will be used to determine what the murrelet was eating prior to the breeding season. Photo by Eric Wagner

Nelson starts processing quickly. She and Rothe, working by headlamp and whispering to keep the bird calm, note the state of its plumage, attach a steel ID band to its leg, measure its wing and bill, and then slip it into a cloth bag for weighing. The bird, likely a male, is 220 grams—a little less than two sticks of butter. It’s lighter than Nelson would like, but heavy enough for a VHF tag.

By the time Nelson hands the bird to the tagging team, 25 minutes have passed.

Nelson is in her late 50s, with long, wavy hair that, like her research subject, is a mix of gray and brown. She has studied marbled murrelets for almost 40 years, and in 1990, found the first active murrelet nest in Oregon. She is modest about that achievement. “I happened to be standing in the right place at the right time,” she says.

Only 30 active nests have been found in the state since then, along with 40 or so inactive nests. (To compare, researchers have found more than 200 nests in British Columbia.) “You can’t draw a lot of firm conclusions from only 70 records,” Nelson says, but finding nests is still a challenge. Murrelets breed anywhere from three to 80 kilometers inland. They travel to and from their nests only at dawn and dusk. Their flight is direct and fast, around 70 kilometers per hour. “It’s literally blink-and-you’ve-missed-it,” Nelson says. Once on their nest high in the canopy, the birds are silent.

It is to bypass these complications that the OSU team has taken to the Pacific in the Pacific Storm on this night in early May. For the past week, weather permitting, they have been at sea from 6:00 p.m. to 6:00 a.m. At twilight, capture teams motor off to search for murrelets, which drift on the water singly or in pairs. 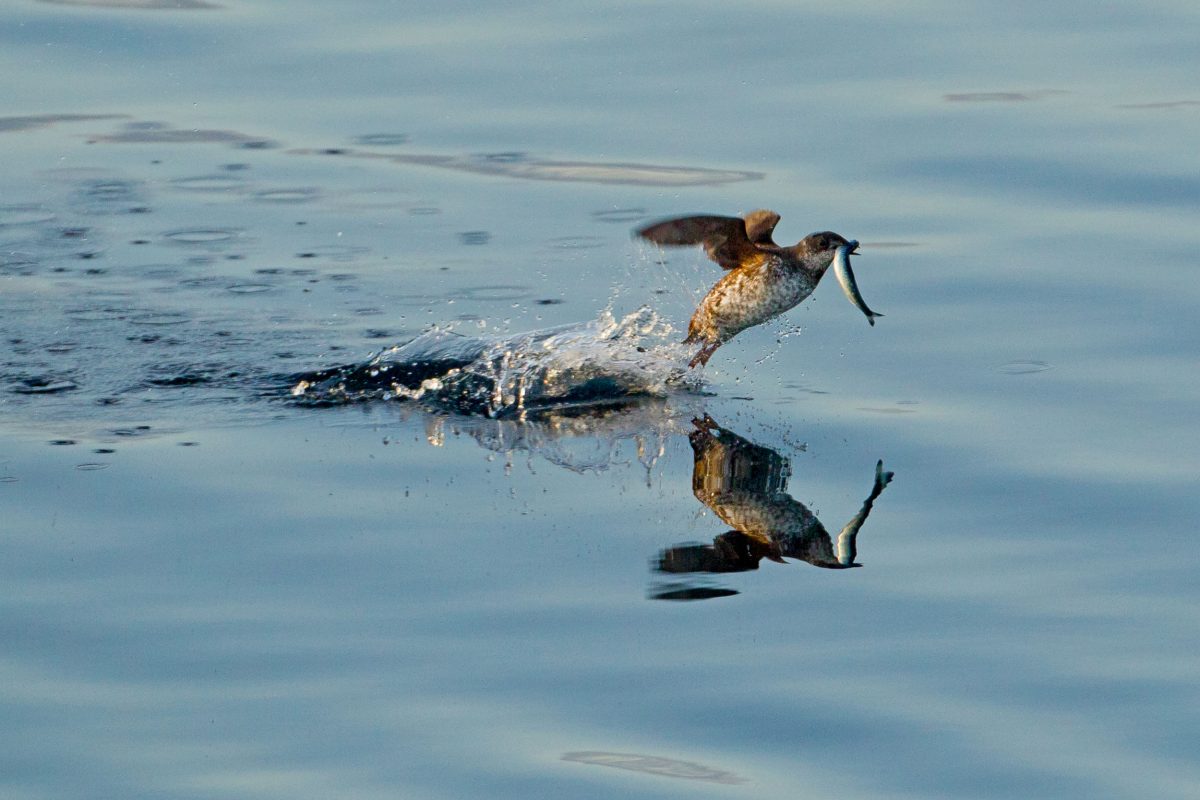 Marbled murrelets forage at sea for small fish such as sand lance, anchovy, and herring. Photo by Mary McDonald/Minden Pictures

“They effectively roost at sea at night,” says Jim Rivers, a professor at OSU and one of the project leads. So far, the teams have caught 17 murrelets. Nelson and Rivers hope for at least 30—their permit allows up to 100—but they will take whatever they can get. (When the cruises end after a few weeks, they will have tagged 61 birds.)

After a sufficient number of murrelets are tagged, three crews plan to fan across the Coast Range to find them in the forests, once their general location has been determined by plane. Homing to the beeps of the VHF tag, the crews will launch thermal-imaging drones to scan the canopy and pinpoint an exact nest site. Professional tree climbers will then set cameras on the nest, so the biologists can monitor them until the nest’s fate is clear: a fledged chick or failure. (In the end, however, due to poor foraging conditions, none of the birds they tag will nest this season.)

Even as scientists now understand murrelets’ need for large trees in this part of their range, large trees alone may not be enough to save them. Analyses of factors affecting murrelet reproductive success offer suggestions as to why the population is still shrinking, but no definitive answers given the complexities of the bird’s life history and its relationship with the land and sea. 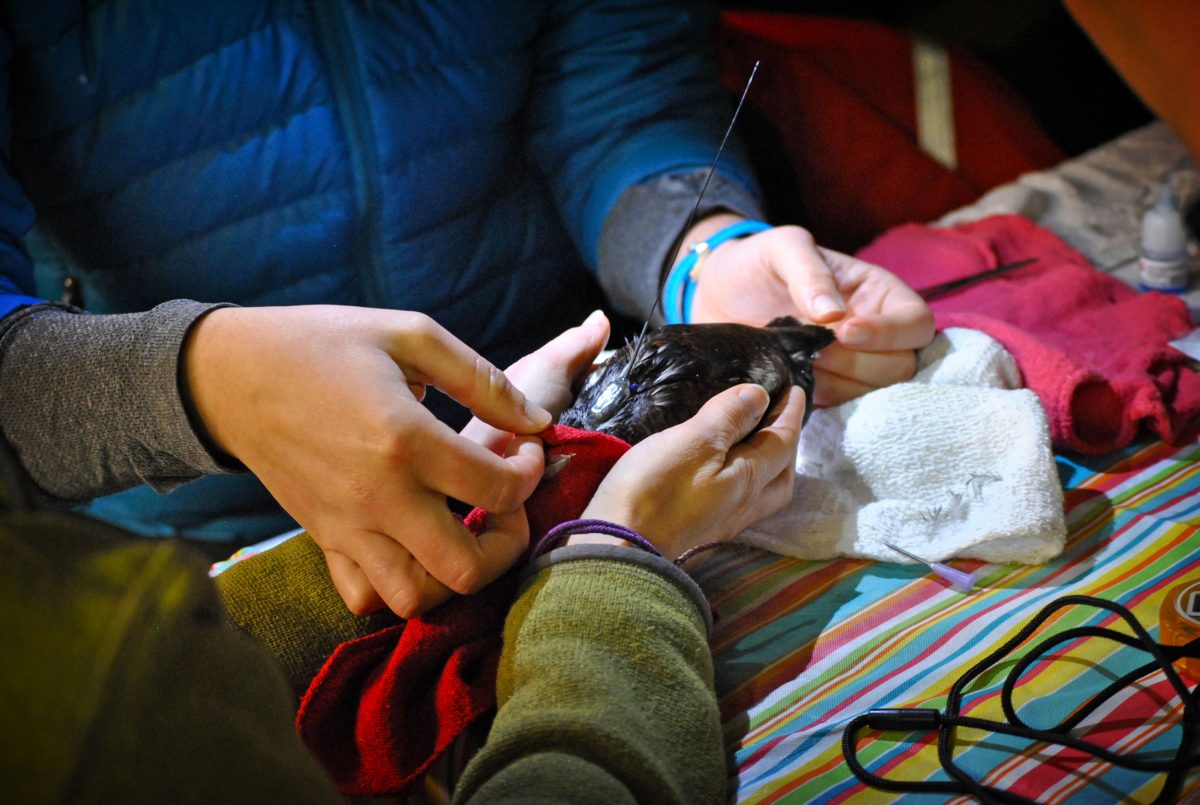 Aboard the RV Pacific Storm, two research assistants cradle a marbled murrelet that has just had a VHF tag sutured to its back. After they determine that the tag is snug, the bird will be released. Photo by Eric Wagner

Then there is the at-sea portion of the murrelet’s life. “Murrelets are affected by both ecosystems,” Nelson says. “The terrestrial threats are as well understood as any, but marine threats are a complete mystery.” One study in Washington found that only 20 percent of murrelet pairs successfully raised chicks. Most failed due to the parents abandoning the egg, or the chick starving—an indication of low prey availability. Similar work in Alaska has suggested that a crash of herring in the early 1990s may have contributed to the murrelets’ decline there, since old-growth logging is not as intensive.

Save all the forests in the world. What good is it if there are no fish in the sea? The only thing Nelson knows is that very little seems to have changed to improve the murrelets’ circumstances. “I’ve been working with these birds for a long time,” she says. “Each summer you learn a little bit, but then you only have tons more questions.” The enigma of the Pacific, enigmatic still.

The tagging team takes the murrelet from Nelson. They first snip off some feathers to use for a diet analysis, and draw blood to get his DNA and stress hormone levels. Using needle and thread, they surgically attach the VHF tag, which is the size and shape of a tadpole. A tech checks the stopwatch. “Forty-five minutes,” she says.

“Good job,” Nelson says. “Let’s get him out of here.” The team members all walk onto the brightly lit rear deck. One of the techs leans over the side of the boat and half-tosses, half-drops the murrelet. He lands in the water with a splash and flaps somewhat plaintively before diving. In a few seconds, he is out of sight.

Everyone turns to go back inside. “Wait,” Nelson says, raising her hand. The crew stops to listen: Keeer! Keeer! “He’s calling to his mate,” Nelson says. Seconds later, a faint, answering keeer! comes through the fog.

“That’s her,” Nelson says. The pair calls to one another, the female getting louder as she approaches, the male fainter as he swims from us. “He’s a fighter,” Nelson says. “That’s good. I like that a lot.” She gives a curt nod, and goes inside to wait for the next bird.