Sisters Melissa and Emily Taylor, part of the fifth generation of commercial fishers in their family, pick sockeye salmon from a set-net at the mouth of the Naknek River in Bristol Bay, Alaska. Photo by Nathaniel Wilder

This article was originally published in High Country News, a magazine about the American West’s environment and communities. Read more stories like this at hcn.org.

Last summer, across southwest Alaska’s Bristol Bay region—home to the largest sockeye salmon fishery in the world—tens of thousands of fish washed up dead along riverbanks. Rivers running at temperatures above the threshold for salmon health were killing the fish even as record numbers of them were returning from the ocean to reproduce.

On the Ugashik River, a wide, muddy tributary of the bay, salmon schooled near the river’s mouth, hunkered down in the deeper, cooler water, but they refused to swim upstream into the too-warm waterway. Because no salmon were reaching spawning grounds upriver, the state closed commercial fishing on the Ugashik in early July, right at the normal peak of the run.

Unable to wet their nets and unsure when the fishery would reopen, Ugashik fishermen bided their time at seasonal camps, looking on as jumpers pocked the water all day long. “You’re pretty much watching your income go by,” Catie Bursch, a commercial set-netter on the Ugashik, said later. As Bristol Bay fishermen gear up for this year’s salmon season—one beset by fears that COVID-19 could overwhelm this remote region as thousands of seasonal workers from across the world descend on fishing communities with scant medical resources—they must also contend with a slower-moving hazard: the warming temperatures that threaten a US $1.5-billion industry and the people it supports.

Every year, millions of salmon return to the Bristol Bay watershed on their annual summer migration to the headwaters where they spawn. This 400-kilometer-long nook in the Bering Sea is largely undeveloped—an area the size of Iceland, riddled with lakes, streams, and wetlands that provide some of the planet’s best habitat for anadromous fish. 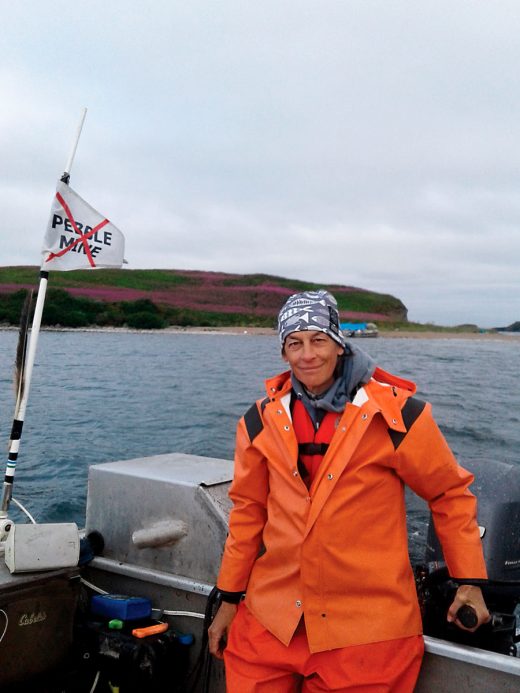 The Ugashik is a muddy world, where fishermen slog through knee-deep muck to secure nets along the edge of the river at low tide. A single net can yield thousands of kilograms of salmon, which fishermen pick by hand from small open skiffs and then deliver to buyers on tenders anchored downstream. Some of the Ugashik set-netters have fished here each summer for decades, living in plywood bunkhouses in a dozen or so camps, bathing in handmade saunas and riding four-wheelers into Pilot Point, a village of fewer than 100 residents, where milk costs $20 per gallon [$5 per liter].

Bristol Bay, which produces nearly half of the global sockeye harvest, has been called “America’s fish basket.” The salmon season passes quickly, with many fishermen making their annual living in five exhausting weeks.

In addition to being the region’s economic driver, salmon represent a primary food source for the residents in remote towns and villages, most of whom are Yup’ik, Dena’ina, and Alutiiq. Each summer, Mark Kosbruk, an Alutiiq set-net fisherman on the Ugashik, puts up about 200 fish—canned, smoked, dried, salted—for home use. Last summer’s closure was “nerve-racking,” Kosbruk told me recently. Dogged by the concern that he might not get to fish at all, Kosbruk fixed everything he could around his camp, topped off all of his engines with oil, then waited.

The state stipulates that water temperature must not exceed 15 °C in order for salmon to stay healthy during upstream migration. Last summer, however, river temperatures in Bristol Bay reached 24 °C. That spells problems for the fish: when salmon can’t avoid warm water, they can sicken or die. Warm water adds stress at a time when fish are already tackling the Herculean task of returning to headwater lakes and streams to spawn, making them more susceptible to diseases and speeding up their already-taxed metabolisms. Something like a heart attack can follow: warm water holds less oxygen than cooler water, but at higher temperatures, salmon actually need more oxygen to survive. Under those conditions, their hearts can’t pump blood fast enough to support their brains and bodies.

In Bristol Bay, state biologists manage salmon by opening and closing commercial fishing to allow enough fish to reach the areas where they spawn. Each river system has a target number of adult salmon that should evade capture—an escapement goal that is designed to ensure the future of the population. But last summer, Alaska sizzled with heat, and warm river water pressed down the Ugashik, preventing salmon from heading upstream. Along Bristol Bay, rubber rain gear melted. Some fishermen fished wearing only underwear and waders. The weeks of sunny, windless weather baked the region’s lakes and rivers.

Then, three weeks into July, a change in the weather brought winds out of the northwest, cooler temperatures, and a little rain. Finally, the school of salmon that had been hunkered down near the Ugashik’s mouth surged upstream, and the state opened the river on July 19. A bonanza of fishing followed.

But because the fish moved all at once in a huge slug, faster than the fishermen could catch them, thousands more passed upstream than the escapement goal. Those salmon could have been netted had the run been more gradual, or if fishermen had been allowed to fish when the temperatures were high. Bursch, who houses her crew in a 100-year-old cannery building in one of the bigger operations on the river, calculated that Ugashik fishermen took a collective hit of $1-million.

Fishermen like Bursch and Kosbruk are expecting plenty of sockeye to return again this year. That’s because, somewhat ironically, salmon runs in Bristol Bay have been huge in recent years: last summer’s return of some 56.6 million fish was the fourth-largest on record, 45 percent higher than the 20-year average. Warming seas are likely the reason. With warmer-than-average ocean temperatures still well below heat thresholds for salmon, smolts have been surviving their first months at sea in greater numbers. 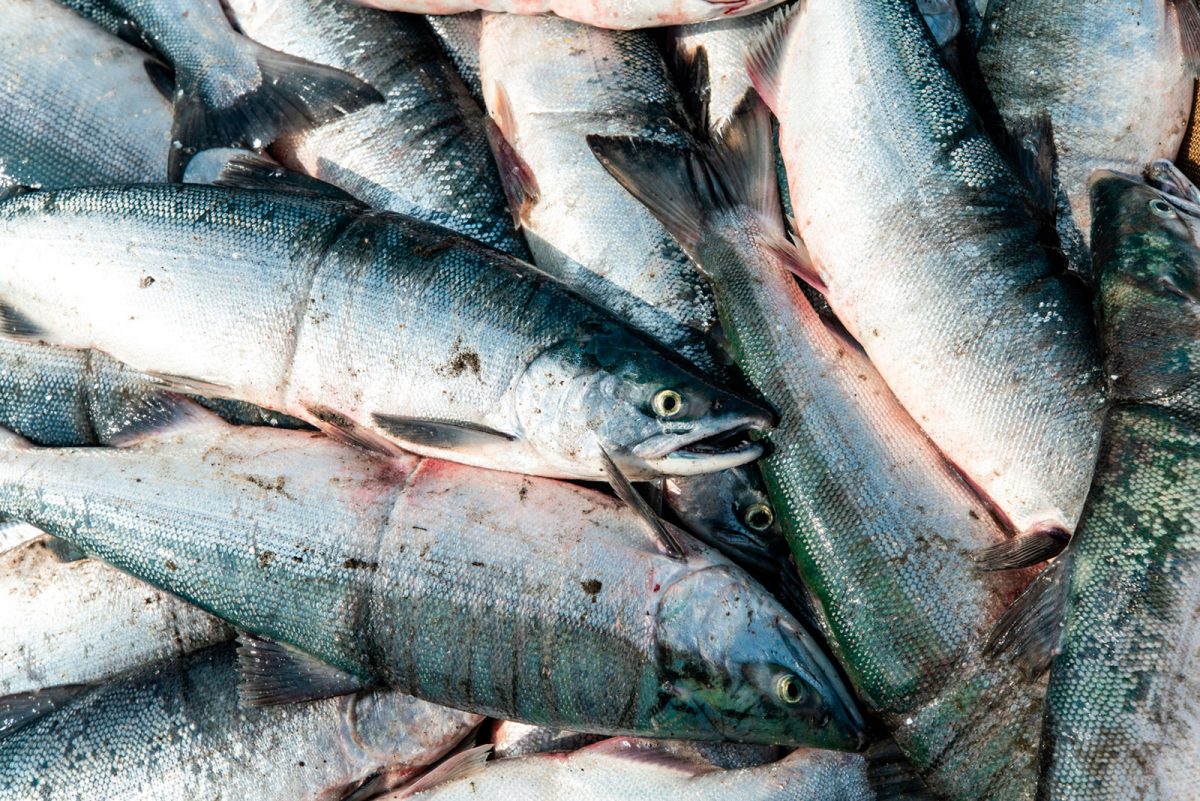 Sockeye salmon stack up in a hold during the height of the sockeye season in Bristol Bay, Alaska. Photo by Nathaniel Wilder

Although wild salmon runs have failed in most of the rest of the world, in Alaska, there’s optimism that the fish will keep returning, even as temperatures rise. “Sockeye salmon have a lot of flexibility in their life cycle, [and] that makes them resilient to climate change,” said Daniel Schindler, an ecologist at the University of Washington who has been studying Bristol Bay salmon for more than 20 years. “We should give them the opportunity to adapt.” This includes, he explained, reducing competition at sea from millions of hatchery salmon and prohibiting industrial development—such as the proposed Pebble Mine—in salmon watersheds.

In recent years, Bursch and other Ugashik fishermen have noticed the rising river temperatures. They typically chill their fish in totes of ice, or, on larger boats, with onboard refrigeration systems to get a better price per kilogram; salmon coming out of warmer water are warmer, and it has been taking noticeably longer to cool them. But last summer’s 10-day closure, and the conditions that caused it, came as a shock. According to Sue Mauger, a stream ecologist at Cook Inletkeeper who has been monitoring salmon streams in Alaska for nearly two decades, temperatures as high as last year’s match the projections for 2069. “We knew it was warming, but we didn’t expect to see that result that quickly,” Bursch said.

Dozens of new protocols were put in place in an effort to keep the commercial fishing industry and the region’s communities safe from COVID-19 this summer, and the scramble to follow them has largely eclipsed concerns over last summer’s sweltering heat. But not for Bursch. She plans to work with Mauger to deploy cigar-shaped underwater temperature loggers on the Ugashik—part of a region-wide effort Mauger has helped lead to set up hundreds of these devices throughout the watershed. Of course, there’s no easy cure for the rapidly climbing temperatures. Still, “the more information you have,” Bursch said, “the better decisions you can make.”