The long-running legal battle between two Indigenous communities is, according to one expert, a direct consequence of colonialism. Photo by Peter Blottman/Alamy Stock Photo

Indigenous people and their ancestors have been netting salmon and digging clams in the island-studded Salish Sea for at least 10,000 years. These longtime residents of what are now Washington State and British Columbia—multiple communities represented by dozens of languages and a long, branching, sometimes-overlapping history—forged alliances among families to allot access to the rich fishing grounds. The arrival of Western colonial powers, however, froze those boundaries and undermined the ability of Indigenous peoples to govern those fishing territories and their natural resources.

Snap forward in time, and for the past 30 years two groups, the Lummi Nation and the S’Klallam nations—represented today by the Jamestown S’Klallam, Port Gamble S’Klallam, and Lower Elwha Klallam Tribes—have been fighting in the courts about a contested slice of the Salish Sea: the waters west of Whidbey Island in northwestern Washington. Involved in this dizzying dispute are no fewer than four tribes, two treaties, and four appellate court decisions. The issue was recently brought to the United States Supreme Court for consideration, though the court declined to hear the case, leaving the Lummi and S’Klallam without an obvious legal path forward.

Regardless of where it lands, this dispute offers a clear-sighted example of how the modern legal system of the United States struggles to replace the dynamic, multidimensional approach to managing fish and fishing rights that dozens of Indigenous nations sustained among themselves for millennia, without the expensive court fees.

“When I look at cases like this between the Lummi and the S’Klallam,” says Josh Reid, a University of Washington historian and member of the Snohomish Tribe, “this is directly a consequence of settler colonialism.”

To understand how colonization brought a fishing dispute between a few Indigenous communities with a combined population of just over 7,700 people all the way to the US Supreme Court requires going back more than a century and a half.

In 1855, the young, land-hungry United States government negotiated a suite of treaties with various Indigenous groups of the northwest. The S’Klallam signed one treaty; their neighbors across the Salish Sea, the Lummi, signed another.

Both treaties essentially said that tribes would give up control of certain territory to the United States government, but preserved “the right of taking fish at usual and accustomed grounds and stations.” Guaranteeing fishing rights was important. For these Salmon Nations, fishing delivers more than full bellies—it also means cultural and spiritual sustenance.

Yet the phrasing used in the treaties—“usual and accustomed” fishing grounds—is deceptively complicated. While Westerners typically view a country’s waters as a shared commons, Reid says that before colonization many political interactions in the region occurred at the village level, with powerful individuals and families owning and managing particular fishing areas.

“People’s rights to fish at these very specific property spaces were governed by their relationship to the authority who owned that space,” Reid says. “Everybody in the region understood that there was an owner to that particular fishing ground.”

To gain permission to fish a site, people would reach out to the site’s owner. “Or they knew,” Reid adds, “there’s no way that I should even reach out—I will not receive a favorable reply.”

Intermarriage between communities could bring new access to a certain fishing spot based on kinship ties, but it might be only a partial right, or require a levy to the family that controlled the resource. Then US treaty negotiators showed up and crafted legally binding agreements that were either ignorant or dismissive of this complex relationship-based fishing rights system.

“That’s the nuance that treaty negotiations, from an Anglo perspective, just completely lost and glossed over,” Reid says.

Yet as settlers poured into the region, Indigenous people increasingly struggled to exert even deliberately outlined treaty rights. By the 1950s and 1960s, the Washington State government was wrongly blaming Indigenous fishermen for depleting salmon runs. Authorities arrested children and elders alike for fishing off reservations in their traditional areas—a treaty-protected practice.

The fervent Indigenous-led protest movement that sprang up as a result grew into what became known as the Fish Wars. In 1974, Judge George Boldt ruled in United States v. Washington, deeming that the state government had failed to live up to its treaty obligations with tribes in western Washington. This ruling, known as the Boldt Decision, would eventually empower 20 tribes, including the S’Klallam nations and Lummi Nation, to co-manage fisheries with the state, along with other important victories for the tribes.

The Boldt Decision also clarified that key treaty phrase—“usual and accustomed grounds and stations”—to mean: “every fishing location where members of a tribe customarily fished from time to time at and before treaty times, however distant from the then usual habitat of the tribe, and whether or not other tribes then also fished in the same waters.”

To delineate each tribe’s usual and accustomed fishing areas, such that they could begin co-managing them, Boldt drew on anthropological reports and affidavits from tribal elders and Indigenous fishermen. But Boldt knew that to fully untangle the often-overlapping claims to traditional fishing territories would take time, as all the tribes involved would need a chance to weigh in and file claims against each other, says Tom Schlosser, an attorney with Morisset, Schlosser, Jozwiak & Somerville, a Seattle, Washington–based law firm that represents Indigenous communities. From 1975 to 1979, Schlosser’s law firm at the time represented treaty tribes including the Lower Elwha Klallam and Port Gamble S’Klallam in a different proceeding under United States v. Washington.

The legal process of defining each tribes’ traditional fishing grounds outlived Judge Boldt, who died in 1984. Indeed, the boundary setting continues today—including the debate between the S’Klallam and the Lummi, whose legal wrangling over the waters west of Whidbey Island has drawn on for more than 30 years.

While he was still alive, Boldt’s efforts set out the usual and accustomed fishing territory of the Lummi Nation to encompass the area stretching from the Fraser River near Vancouver, British Columbia, in the north, down through the San Juan Islands in Washington, and south to “the present environs of Seattle.” But between the San Juans and Seattle lies Whidbey Island, a long coil of land in the central Salish Sea unmentioned by Boldt.

The S’Klallam nations, meanwhile, were determined to fish an area curving south and west from Whidbey Island into the Salish Sea, the waters of the San Juans, and west along much of the Juan de Fuca Strait, which separates the Washington mainland from Vancouver Island, British Columbia. 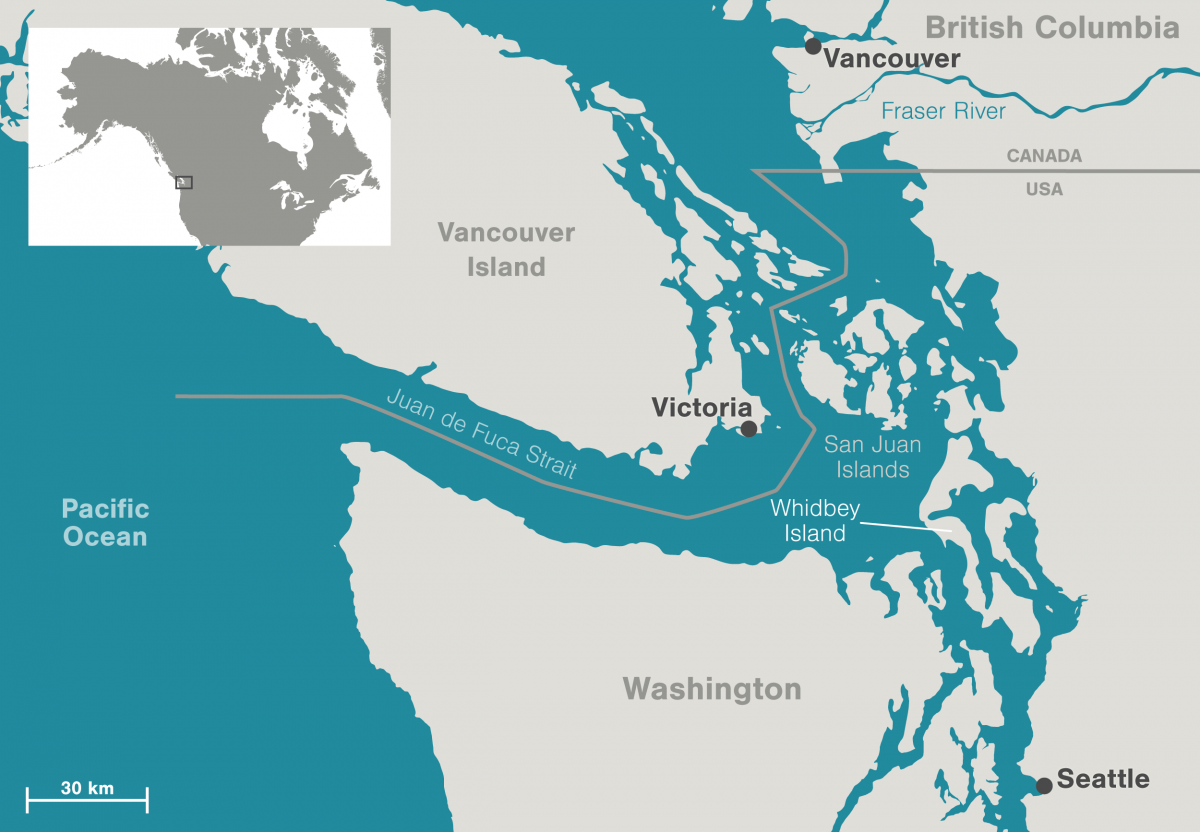 According to Boldt’s definition, multiple Indigenous nations can simultaneously lay claim to the same patch of water. As Reid points out, this used to happen based on family ties. But the S’Klallam argue that historical Lummi fishing in the west Whidbey Island region was “mere incidental fishing,” rather than customary fishing as required by the Boldt Decision, and shouldn’t count as usual and accustomed fishing grounds.

“Beginning some 30-odd years ago,” the Jamestown and Port Gamble S’Klallam argue in their December 2021 petition to the US Supreme Court, “the Lummi have increasingly sought to expand their large commercial fishing operations further west into the Strait, displacing smaller S’Klallam fisheries and threatening the S’Klallam’s traditional way of life.”

The S’Klallam first raised this issue of the Lummi Nation allegedly expanding its fishing effort beyond the western extent of its usual and accustomed fishing territory in Washington district court in 1989. This question kicked off a long and complex legal battle that would go on to ping-pong between district and appellate court ever since.

In 2017, the Ninth Circuit Court of Appeals decided that the Lummi Nation’s fishing territory did include the area west of Whidbey Island. In December 2021, however, the S’Klallam petitioned the Supreme Court to weigh in on the extent. The S’Klallam argued that over four decisions made by the Ninth Circuit Court, the previously determined understanding of the phrase “usual and accustomed” from the 1855 treaties was transformed into something that now covers “mere incidental fishing” and enables the Lummi Nation to today “claim 300-plus square miles [780-plus square kilometers]” of such fishing grounds. Yet on February 22, 2022, the Supreme Court denied their petition.

Schlosser, the attorney, is not surprised the Supreme Court decided not to hear the case, given the court considers fewer than 100 high-profile cases each term. But by not taking it up, the high court has left the S’Klallam without clear legal recourse to challenge Lummi fishers’ right to the disputed waters along a certain line west of Whidbey Island. “I think that issue’s closed,” he says, adding that the S’Klallam nation should plan their fisheries with this understanding.

But what troubles Schlosser is that people in the general public may misread what this court case actually represents. With fish populations in the Salish Sea already depressed because of habitat loss, historical overfishing, and dams, “I would hate to have people think that the tribes are just squabbling over the last few fish,” he says. “That isn’t true.”

Instead, Reid, the historian, says tribal nations are just trying to make the best of a bad situation within the parameters now available to them. Some of the older systems of managing resources and settling disputes—systems that carried intertribal relations for millennia, “are no longer in place, or directly have been gutted by settler colonial governance systems.”

“That makes it really hard for them to adjudicate things as they once did,” he says.

Today, the Salish Sea region is home to nearly nine million people, most with little understanding of the Indigenous peoples whose homelands they share—or the treaties that made this development possible. In the United States, tribes have fought relentlessly for governments and the public to recognize their treaty rights to fish in their traditional areas. Yet even victories like the Boldt Decision can lead to strife as tribes attempt to fish where their ancestors did, without the benefit of the sophisticated systems that made it possible.

In reporting this story, the Jamestown S’Klallam and Port Gamble S’Klallam Tribes did not return multiple requests for comment. Lummi Indian Business Council member Lisa Wilson said: “We do not respond to intertribal legal issues.”