In the azure waters far off Mexico’s Pacific coast lies a volcanic island that is the world’s last stronghold of the Guadalupe fur seal.

Guadalupe Island’s remote location about 250 kilometers west of the Baja California peninsula is what once saved the species—the rarest of the four fur seal species—from extinction by overzealous hunters. Today, geography offers no protection against anthropogenic climate change.

Slaughtered commercially for its pelt, the Guadalupe fur seal was believed to be extinct by the end of the 1800s—when, in fact, a small population survived on Guadalupe Island. After the remnant colony surfaced a few decades later, the Mexican government protected it, and the population slowly rebounded.

In the mid-1950s, fewer than 20 individuals inhabited Guadalupe Island. As the population expanded, scientists confirmed Guadalupe fur seals had reached the San Benito Islands, more than 270 kilometers southeast of Guadalupe Island, in the late 1990s. Researchers have also documented sightings over the past 30 years on Southern California islands, especially San Miguel Island, where they’re the most common pinnipeds in archaeological deposits.

The last breeding season census in 2010 pegged the population at more than 13,000 at Guadalupe Island. At the San Benito Islands—more of a resting than a breeding site—the population reached about 2,500. By 2017, scientists estimated the combined population at 40,000, still well below historical estimates of 200,000.

The International Union for Conservation of Nature rates the Guadalupe fur seal as a species of least concern. But new research headed by marine biologist Claudia Hernández-Camacho of Mexico’s Instituto Politécnico Nacional finds that climate change is putting the species at increasing risk.

A series of Guadalupe fur seal die-offs and strandings in recent years has been blamed on a warming ocean negatively affecting the animal’s diet and ultimately its health. From 2013 to 2015, for example, a warm-water event called the Blob muscled into the northeastern Pacific.

The US National Oceanic and Atmospheric Administration investigated the recent strandings along the California coast and found that the number increased from an average of nine a year from 2010 to 2014 to 99 in 2015 and has since slowly dropped. In 2017, there were 61 strandings. The vast majority of stranded seals were juveniles and weaned pups that suffered from malnutrition, resulting in bacterial and parasitic infections. Warmer water is thought to have displaced the animals’ normal prey, which includes small pelagic fish and squid. 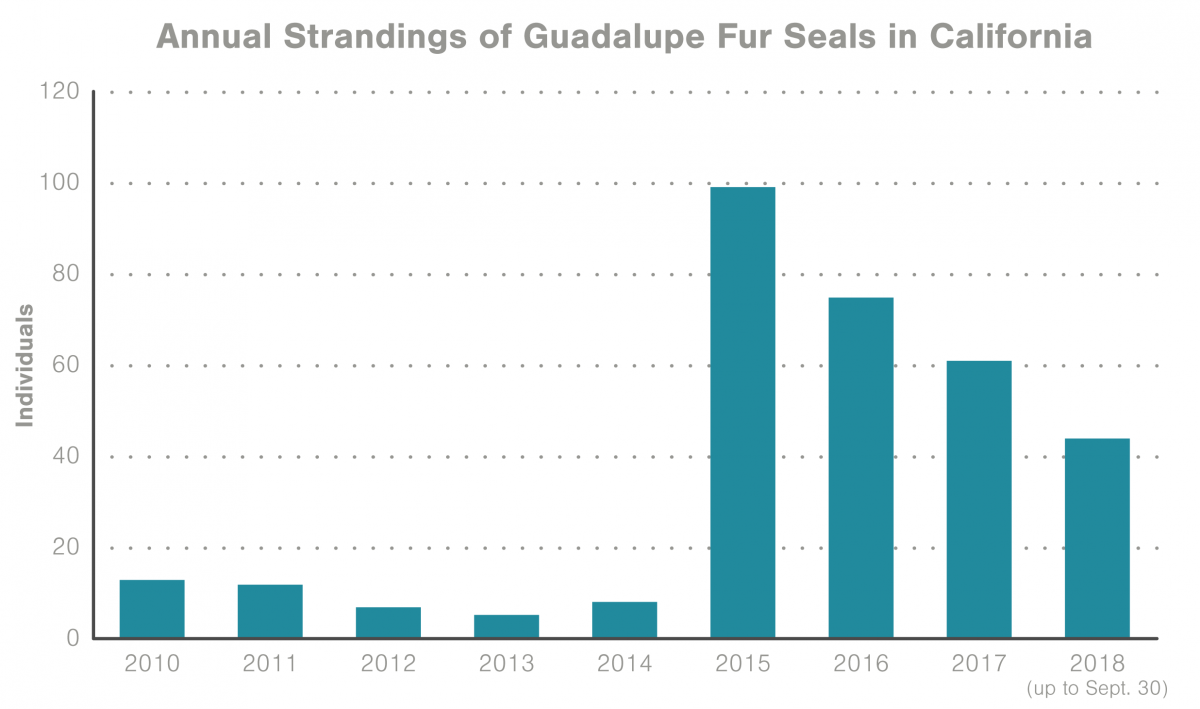 From 2010 to 2014, there was an average of nine Guadalupe fur seal strandings annually, rising to more than an eightfold increase in recent years. Data by NOAA

Hernández-Camacho’s research suggests that the colony of Guadalupe fur seals at the San Benito Islands could be rated endangered if the population reverses its upward trend and slipped to 100 to 500 due to unforeseen circumstance. In comparison, the Guadalupe Island population remains secure and viable for now.

Climate change is predicted to result in more frequent extreme weather events, says Tenaya Norris, a marine scientist at the Marine Mammal Center in Sausalito, California, who is involved with the rescue and rehabilitation of stranded seals but not the study. A particularly strong hurricane barreling down on Guadalupe Island at breeding time, for example, could devastate the population, she warns.

In the absence of a more recent population census, Norris hesitates to say that the animals, once resilient in the face of overhunting, can survive climate change. The increase in strandings is worrisome. “There has to be a significant impact on the population,” she concludes.