Amsterdam Island is home to three species of imperiled albatrosses. A new vaccine for avian cholera could help protect the birds that breed on the remote Indian Ocean island. Photo by Eric Baccega/Minden Pictures

Amsterdam Island is a Manhattan-sized, grass-covered volcanic rock 3,000 kilometers from the nearest sign of civilization. Three albatross species come to breed on this speck of land in the southern Indian Ocean—and one deadly disease threatens them all.

No one is sure how avian cholera infiltrated the isolated island, but the infectious agent might have arrived with rodents or cattle well over a century ago, or with cats or chickens more recently. Or an albatross may have been blown off course and picked up the disease in a rehabilitation center before finding its way back to the island.

All researchers know for sure is that starting in the 1980s, avian cholera caused a series of devastating mass deaths of the island’s albatross chicks. In some cases, the disease killed nearly every chick within colonies monitored by scientists. Adults typically escaped unharmed, perhaps because they could mount an immune response and produce antibodies more quickly. Today, the breeding birds number just 120 critically endangered Amsterdam albatrosses, 800 dark-mantled sooty albatrosses, and 46,000 endangered Indian yellow-nosed albatrosses, which account for about two-thirds of their global population. 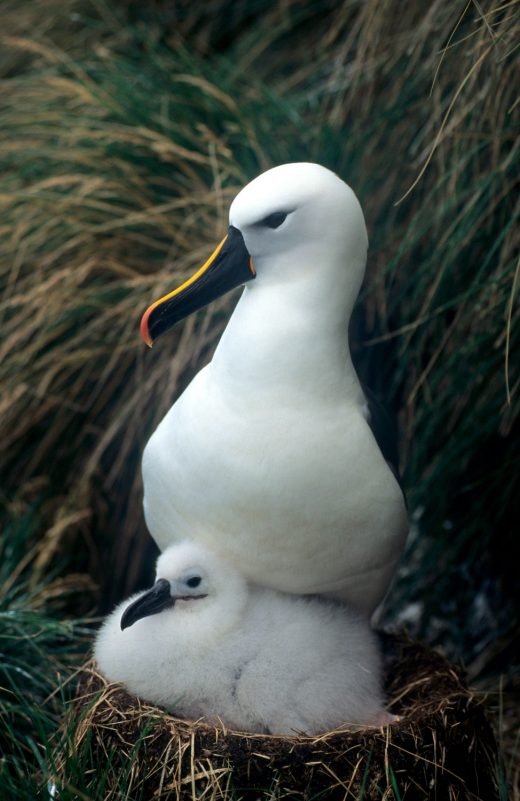 Amsterdam Island is the breeding ground for a large proportion of the world’s endangered Indian yellow-nosed albatrosses. Photo by Eric Baccega/Minden Pictures

Now, there’s cause for hope for albatross chicks. Researchers, including Amandine Gamble, an ecologist at the University of Montpellier in France, used one dead albatross chick to develop a vaccine that could breathe life into the albatross breeding colonies on Amsterdam Island.

Gamble and her colleagues extracted a strain of avian cholera from a dark-mantled sooty albatross chick shortly after its death during the 2011–12 breeding season. The bacteria was cultivated in a lab, then sent to a veterinary laboratory in France to develop the vaccine. The process follows similar work on vaccines to protect poultry from avian cholera. Like other vaccines, this one stimulates the albatross’s immune system to produce antibodies that target the chosen bacteria.

In field trials, the vaccine had considerable success. Of 30 Indian yellow-nosed albatross chicks vaccinated at around two weeks old in early 2016, 46 percent survived to fledge, compared with just 14 percent among 36 chicks not vaccinated. “It was a really important increase in survival,” Gamble says. “When not vaccinated, the chicks die before mounting any immune response.”

Avian cholera is a threat to a diversity of remote breeding colonies around the world: common eiders and lesser snow geese in the Canadian Arctic; rockhopper penguins in New Zealand; Cape cormorants in South Africa; and southern giant petrels, kelp gulls, and skuas in Antarctica.

The successfully vaccinated birds have not yet returned to Amsterdam Island, since it takes at least five years to reach breeding age—that’s when researchers will know better how well the vaccine worked. Albatrosses on the island breed every one to two years and can live 50 to 70 years.

The next phase of the research, Gamble says, is to develop a variant of the vaccine for adult females. This vaccine would need to last several years so mother birds could pass along the antibodies to their offspring. Such vaccines, she says, could go a long way in protecting the remaining albatrosses that nest on this remote outpost.