In San Pedro Sula, Honduras, and the surrounding area, two powerful hurricanes have left nearly 500,000 people without access to healthcare. Dense congregations of people in shelters or temporary housing threaten to exacerbate the spread of COVID-19. Photo by SOPA Images Limited/Alamy Stock Photo

Swaths of Central America are still underwater and hundreds of thousands of people are homeless after two major hurricanes, Eta and Iota, pummeled the region in November. Governments won’t know the extent of the damage until the floodwaters recede, but hospitals, health authorities, and first responders are already bracing for another disaster: a spike in COVID-19.

“Our volunteers have protective equipment, but everyone else seems to have forgotten about COVID,” says Virginia Claro, director of operations for the Red Cross in Nicaragua. “Between food or masks and hand sanitizer, people are going to pick food.”

“With everything going on and packed shelters, no one is wearing a mask,” she adds. Desperation has caused pandemic precautions to plummet, and the lack of masks is exacerbating the health crisis.

These conditions could cause a highly transmissible airborne disease like COVID-19 to spread like wildfire. In Honduras alone, nearly 175,000 people are crammed into shelters that aren’t equipped to prevent the spread of COVID-19, says Ciro Ugarte, director of health emergencies at the Pan American Health Organization (PAHO). Thousands of other displaced residents are doubling up with friends and family across the country.

Alida Hernandez, a 38-year-old tortilla vendor from Tocoa, Honduras, was eight months pregnant with twins when Hurricane Eta hit. She thought her house was safe, since the hurricane had lost power by the time it reached her town. But heavy rains caused a nearby river to overflow.

“We didn’t think it was going to happen, we were unprepared,” Hernandez says. “We didn’t have a chance to take anything with us, just what we had on.”

Hernandez fled to a nearby terrace with her partner and seven children while their house and all of their belongings were swept away. They were stranded for three days before being rescued by boat. Hernandez is now living with her sister, mother, and three other family members. She recently gave birth to her twins, and they all sleep together in her sister’s one-room home.

With little more than a roof over her head, Hernandez is surviving off the kindness of her family, friends, and strangers. She’s received food, clothes, and other donations from the community, but when it comes to the coronavirus, she’s pinning her hopes on faith.

“We’re always asking God to take care of us,” Hernandez says. “I know he won’t let us get sick.”

But the destruction wrought by the back-to-back hurricanes means the region is now facing the difficult task of confronting a surge of COVID-19 cases with a decimated healthcare system.

Beyond the damage to hospitals and other facilities, a major defense against the virus has been severely weakened. The Salvador Paredes Hospital, on Honduras’s Caribbean coast, was spared from floodwaters because of its elevated terrain, but its capacity to test for COVID-19 has been hampered by damaged roads.

As a result, Ugarte says Honduras has seen a dramatic drop in reported coronavirus cases—a sign that the surveillance system is struggling. “This is clearly a challenge for reporting the new cases and detecting new cases.” 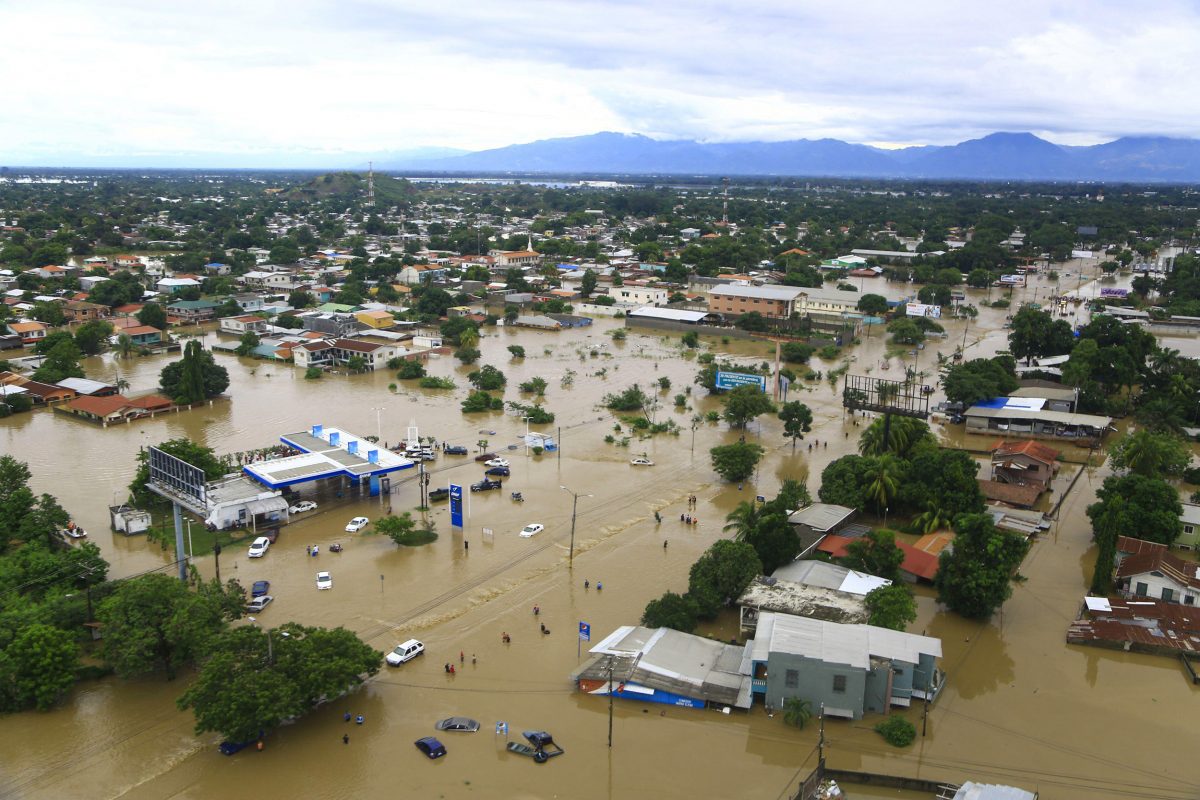 Hurricane Eta’s Category 4 winds slammed into Nicaragua’s Caribbean coast on November 3—it was one of the most devastating hurricanes in decades. On November 16, Hurricane Iota made landfall less than 40 kilometers south of where Eta came ashore. Iota was the first Category 5 hurricane to form in the Atlantic in November since 1932. Photo by dpa picture alliance/Alamy Stock Photo

PAHO is helping countries reinforce their testing capacity to try to regain visibility of the virus’s spread.

Arita says that some patients and employees are still cut off from the hospital, and while they’ve seen fewer COVID-19 patients since the hurricanes hit, she’s preparing for a surge.

But the coronavirus isn’t the only disease health professionals are keeping their eyes out for. Water sources throughout the region have been contaminated, and have become breeding grounds for dengue, malaria, and chikungunya. These diseases also thrive in shelters.

In Nicaragua alone, the Red Cross estimates that 4,500 wells have been compromised by the hurricanes and associated flooding. The water, contaminated with fungi and bacteria, can’t even be used for hand-washing.

Claro says it takes a pair of workers two to three days to decontaminate a well. Currently, there are only 20 people on her team tasked with decontamination, but she says an international 25-person crew will be helping soon.

Claro says she and other first responders were still assessing the havoc wreaked by Hurricane Eta when she heard an even stronger hurricane was hurtling toward them.

“This is something that’s never happened before,” Claro says. “And it hit in an impoverished zone with high levels of poverty and food insecurity, so imagine the impacts on those communities after getting hit by a hurricane, and then getting struck by an even stronger one.”

Claro says the Red Cross’s priority in Nicaragua in the next few months is to deliver food and water to communities still cut off from the rest of the country. Fighting the coronavirus is no longer the most urgent crisis in the region.

With positive news on vaccine development, PAHO is hopeful that well-established vaccination programs in Latin America may soon be able to mitigate the effects of the virus, but climate-related disasters are only expected to get worse.

With intensifying droughts and floods, Central America is one of the most vulnerable areas when it comes to climate change. The region’s Caribbean coast is also home to Afro-descendent communities and Indigenous tribes that face higher levels of poverty and unemployment.

Studies have linked stronger hurricanes in the Atlantic Ocean to warming seas, and 2020 saw the most named storms on record. With once-in-a-lifetime hurricanes now coming multiple times a season, healthcare workers are learning to adapt.

Despite the devastation, Claro says the low death toll compared with previous storms is a silver lining, and proof that regional preparation, drills, and logistics planning are working. Arita says the back-to-back hurricanes taught her hospital how to prepare, including accommodating workers who live in flood zones.

But Hernandez and her nine children, and thousands of others, will have no choice but to rebuild and hope an increasingly likely disaster won’t strike again.

“We don’t have anywhere else to go,” Hernandez says. “If we had money to move somewhere where it didn’t flood we would, but we’re poor.”