Paul Scofield (left) and Paul Deans examine a fossilized turtle bone found in limestone that was once inside a pillar in the Oxford Terrace Baptist Church in Christchurch, New Zealand. Photo by the Canterbury Museum

A rare turtle fossil has been discovered inside a pillar in a historic church in New Zealand.

For 130 years, the Baptist church stood on Oxford Terrace in Christchurch. But like so much of the city, it was damaged beyond repair in the Magnitude 6.2 Canterbury earthquake on February 2011, which caused the church’s roof to cave in and its grand Corinthian columns to topple to the ground.

The church has since been demolished and rebuilt, and the iconic limestone pillars hollowed out, reinforced, and used in a memorial to the quake’s 185 human victims. The cores were extracted and gifted to local stonemasons and sculptors, including Paul Deans.

The Oxford Terrace Baptist Church in Christchurch, New Zealand, is pictured before and after a 2011 earthquake. Photos by Heather Cuthill CC BY 2.0 and Schwede66 CC BY-SA 3.0

At first, Deans had no idea what he was going to do with the pieces of pillar, but late in 2020 he thought of shaping them into pedestals for his other sculptures. Picking one up, he noticed an orange line running across it. He chipped away at it and realized it wasn’t a seam of different-colored rock or a seashell—both common in limestone—but a fossilized bone. “It was sort of flat like a shoulder blade,” Deans says. Curious, he rang the Canterbury Museum. The senior curator of natural history, Paul Scofield, asked him to bring the object in. “He was quite excited,” says Deans.

Scofield could see that the fossil had once been part of an ancient sea turtle that was several meters long and dated back to the Oligocene, around 25 to 35 million years ago. The fossil itself was only about 30 centimeters long, comprising a section of vertebrae from the underside of the turtle’s shell.

It’s an incredibly rare find, Scofield says. While limestone from the Oamaru region south of Christchurch has been quarried extensively and used for building for more than 150 years, very few vertebrate fossils have been found within it. 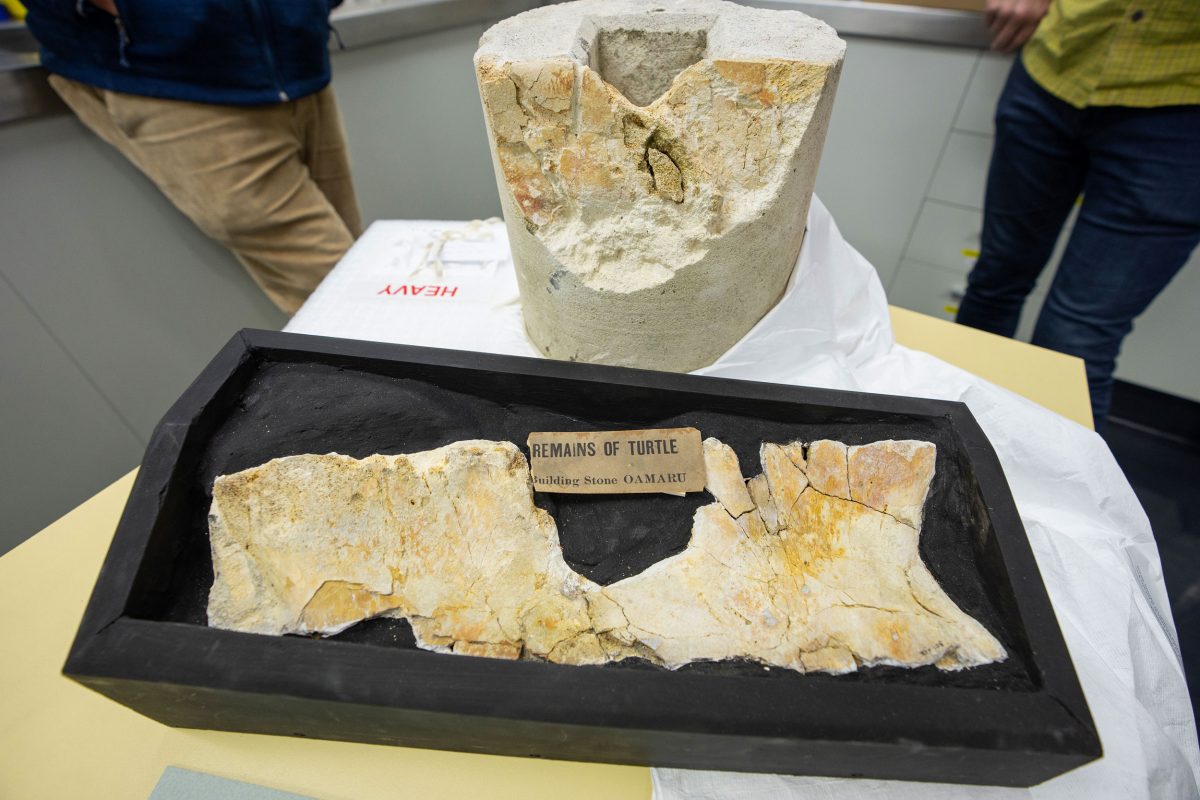 The fossilized turtle remains were found inside limestone. Photo by the Canterbury Museum

But the museum does have another turtle fossil in its collection.

In 1880—just one year before the Oxford Terrace Baptist Church was built—a prominent Christchurch builder donated some other fossilized turtle bones to the museum. The similarities between the two fossils are striking, says Scofield. “The staining on the bones caused by mineralization is almost identical.” Both are embedded within pale Oamaru stone, and they are so alike that Scofield speculates they came from the same quarry. It’s even possible they are two parts of the same animal, he says.

Unfortunately, the pieces are too fragmentary to allow for a proper scientific description of the turtle. “It’s sort of like losing a piece of a jigsaw 30 million years ago at the bottom of the sea,” Scofield says.

Another fossilized turtle found in New Zealand’s far north has some similarities, but Scofield’s best guess is that the turtle fossil found in the church’s pillar likely represents a previously unknown species in the same genus. “They’re an evolutionary intermediate point between earlier turtles that were more like tortoises than the ones we see today,” he says.

The early Oligocene was a time of dramatic global cooling and ecosystem change, yet the vertebrate fossil record is sparse, says Marcus Richards, a paleontologist at the University of Otago in New Zealand. “Accumulation of more specimens like this one could help our understanding of the reaction of ecosystems to changes in ocean circulation patterns and temperatures. It’s a little silver lining of that building being knocked down—that we can unlock a few little treasures that have been stored up in it for over 100 years.”

One more piece of the jigsaw likely remains hidden in plain sight. The fossil bone Deans found had clearly been cut in half when the core was removed from the church pillar. That means another part is probably still inside one of the columns that now make up the church memorial to the earthquake victims.

Other specimens could be buried in buildings throughout New Zealand, says Richards, as Oamaru stone is often quarried and used in large solid blocks. “There could be all sorts of interesting things entombed within.”