Sharks are a broad and diverse group of species, but in the public imagination we tend to treat them all the same. Photo by Brandon Cole Marine Photography/Alamy Stock Photo

In the 1975 film Jaws, Bruce was a 7.6-meter-long model of a great white shark. He had a peerless reputation for power, an unquenchable thirst for blood.

But Bruce was also made of rubber and latex. He was nothing like a shark. And yet his character would come to define the sharks of our seas. Regardless of their true nature, these fish are seen as superlative predators that rule any waters they ply.

This image is so palatable that we’ve even begun to give sharks a degree of power over their environments that, in the vast majority of cases, they’ve never really held.

In the media and the public eye, sharks have adopted a level of ecological significance far beyond what is realistic. Take an example from the New Yorker: “We’ve been systematically killing off sharks, in spite of evidence that, as ‘apex predators,’ they’re crucial to maintaining biodiversity.”

Every year, fishers kill an estimated 100 million sharks by accident or for their meat and fins. But according to ecologists Peter Mumby and George Roff, the familiar tale that these devastating losses are crippling the wider ecosystem is often just that: a story, not a conclusion backed by science.

The seed of the idea that sharks are all-powerful ecosystem managers was first sown in 2004, says Mumby. That year, researchers from the University of California, San Diego published a study that assessed the interrelationships of 208 species of fish inhabiting a Caribbean coral reef. Who ate whom, and who benefited?

Although a weak link, the researchers’ computer models suggested that, by eating mesopredators, sharks that dwell on coral reefs increased the number of herbivores, such as parrotfish, on the reef. And with fewer mid-sized hunters, this meant that there were then more nipping and trimming herbivorous mouths to remove algae, protecting the very bedrock of the reef—the coral.

“A lot of people have used that study for justification that shark conservation would benefit coral reefs,” says Mumby. “But when we did our analysis, for each of the studies we looked at there was either no evidence of that kind of relationship or it was ambiguous or weak.” 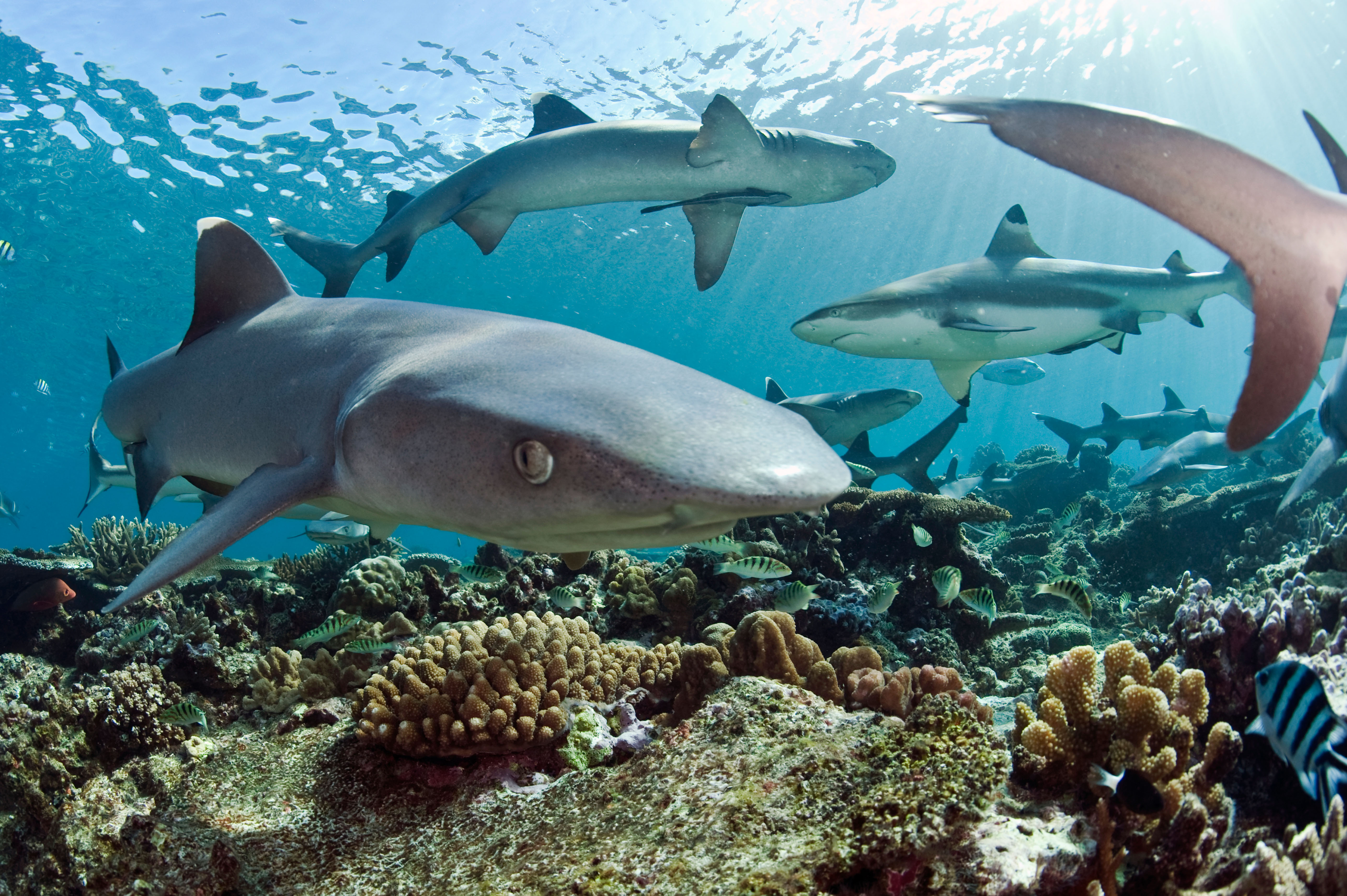 In their review study, Mumby, Roff, and colleagues compiled 11 classic studies on coral reef ecosystems, looking for evidence of reef sharks’ presumed influence. But what they found ignored the conventional wisdom. In areas where sharks were fished, herbivore numbers didn’t fall. In Marine Protected Areas where large-scale fishing is banned, a bounty of sharks didn’t lead to a plethora of parrotfish.

Although surprising, this actually makes logical sense once you realize one crucial detail: most reef sharks are not apex predators.

Resident reef sharks do not sit atop the ecosystem like guardian angels; they dwell among the masses feeding on anything and everything they can. They’re raccoons, not wolves.

On land, top predators like wolves prey upon large herbivores such as deer and elk, thereby protecting the grass and low-hanging trees from overgrazing. Such knock-on effects through an ecosystem are known as trophic cascades. In this case, those at the very bottom of the food chain—plants—are dependent on those at the top.

But of the 26 key species of sharks on coral reefs, only a few infrequent visitors—namely tiger sharks, bull sharks, and hammerheads—can be placed in the top tier of the food chain. “Shark” isn’t a blanket term for a huge voracious hunter, but a family of fish that encompasses a diversity of diets and lifestyles. The vast majority of species, such as whitetips and grey reef sharks, for example, are more akin to large-mouthed groupers and giant trevally—they are all mesopredators. 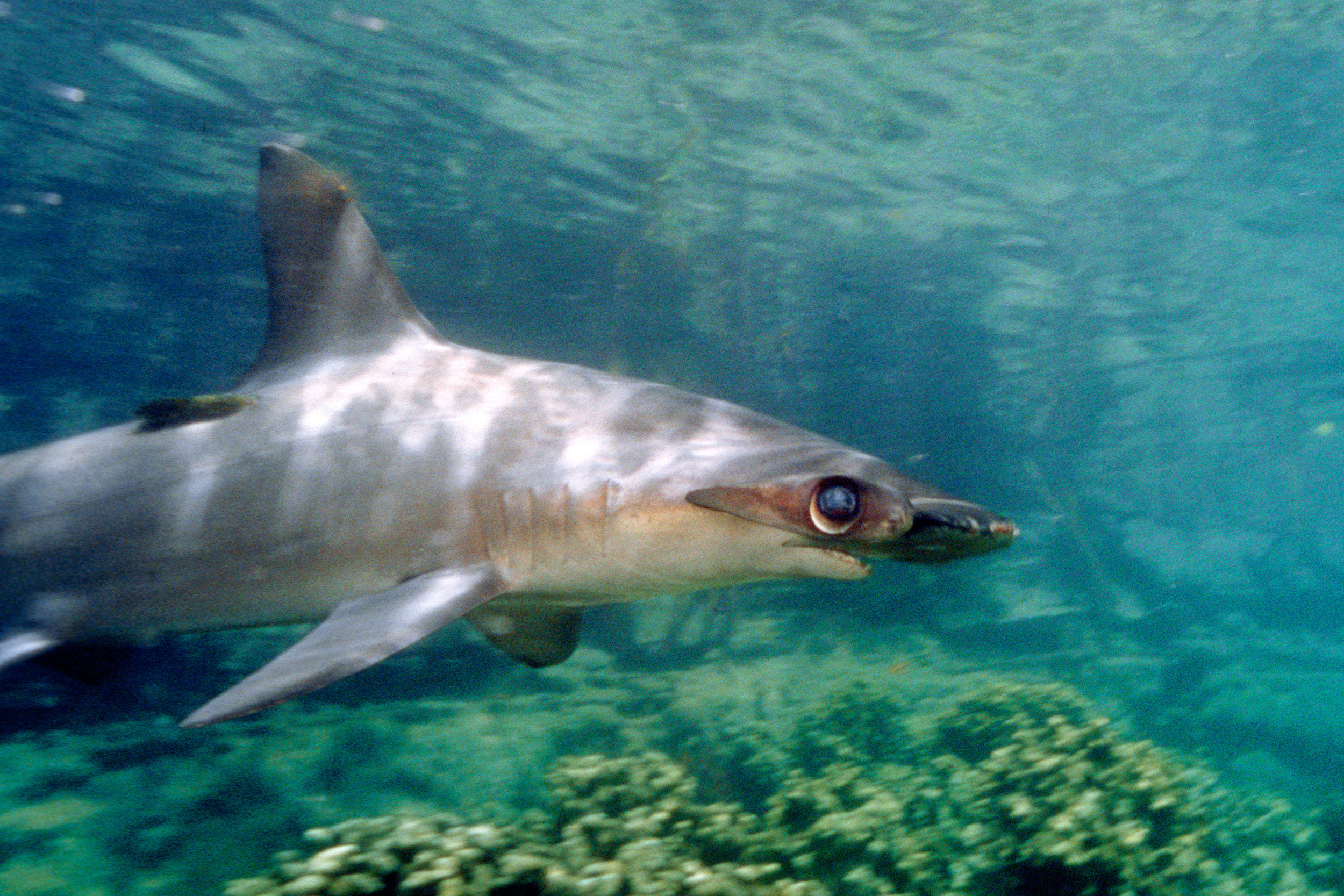 Only a handful of reef shark species, such as hammerheads, actually occupy a space at the top of the food chain. Photo by Animal Stock/Alamy Stock Photo

None of this is to say that reef sharks are unimportant. The control of herbivores is just one of myriad benefits sharks could play within the concatenations of a coral reef.

Mesopredator sharks could perform other roles: perhaps they remove the sick and injured, or control fishes’ foraging behavior through the power of fear. Or, by hunting at different times, or in nooks and crannies that other predators can’t reach, reef sharks may simply extend the threat of predation into unique realms of space and time.

The reality is, sharks do affect the health of coral reefs. But the ways in which they do so are far more subtle or tangential than the prevailing wisdom suggests.

In lieu of ecological evidence, some shark scientists have turned to economics to showcase sharks’ importance. Where cash is concerned, the role of these mesopredators is as crystal clear as the shallow waters they inhabit.

In Palau, an archipelago of roughly 300 islands in the western Pacific, for instance, shark diving accounts for US $18-million annually, or eight percent of the nation’s gross domestic product.

“We can wave our hands and say it’s worthwhile having [sharks] ecologically, and we can argue about the evidence for it, but when you actually look at the economics of it, that evidence is overwhelming,” says Mark Meekan, a fish biologist from the Australian Institute of Marine Science. “I think it’s [the economic] side of things that will prove the savior of reef sharks in the future.”

Mumby agrees. “The importance of sharks isn’t their direct effects as predators in helping reefs; it’s more the fact they can help generate revenue that can help people’s livelihoods and help managers reduce some of the other pressures on reefs,” he says.

“And in that role, as a sort of ambassador for the reef, they’re incredibly important.”