No one is quite sure where yellow crazy ants came from, but they’ve been slowly taking over tropical islands around the world. Photo by Stephen Belcher/Minden Pictures/Corbis

Congratulations to Joshua Rapp Learn on winning a silver award from the Digital Publishing Awards for this article.

Stefan Kropidlowski is sitting motionless on an overturned bucket on a tiny island in the North Pacific up to his neck in ants. If he makes any noise or shuffles his feet, the vibrations could rile the ants into a frenzy. From pores in their abdomens, the ants would spray him with acid.

“If you had an open wound you would feel like you just walked through a cloud of hydrogen peroxide,” Kropidlowski says. Under similar conditions, a colleague couldn’t take it and broke down crying. “It was challenging,” he says. “The ants were driving her crazy.”

But Kropidlowski didn’t stumble into an ant’s nest; he’d opted into this horrifying ordeal. The ants are naturally curious, investigating anything that enters their environment, whether human or the bait Kropidlowski had set out around them. And any movement would disturb the test he was conducting: to find the bait most attractive to yellow crazy ants—the key that could help him finally eradicate the invasive species.

Since setting up the first camp of the Crazy Ant Strike Team (CAST) on Johnston Atoll, Hawaii, in August 2010, Kropidlowski has let ants crawl over him for 15-minute sessions, several dozen times. And finally, for the first time in five years, it looks like those efforts have paid off.

Johnston Atoll has had a more turbulent century than might be expected for a 2.5-square-kilometer island in the middle of the Pacific. The airstrip there was shelled in the Second World War by the Japanese air force, and the atoll served as a US nuclear missile launch site in the 1960s. But today this largely abandoned island cluster provides nesting habitat for what may be the world’s largest colony of red-tailed tropicbirds.

Though it’s unclear where yellow crazy ants originate—perhaps Africa or Asia—they’ve now spread to islands throughout the Pacific and Indian Oceans, and the Caribbean, disrupting ecosystems wherever they travel.

And while the ants’ formic acid is not particularly harmful to humans, it can be devastating to birds. When a red-tailed tropicbird lands near one of the insects’ super colonies, the ants swarm the bird and spray acid at its eyes. 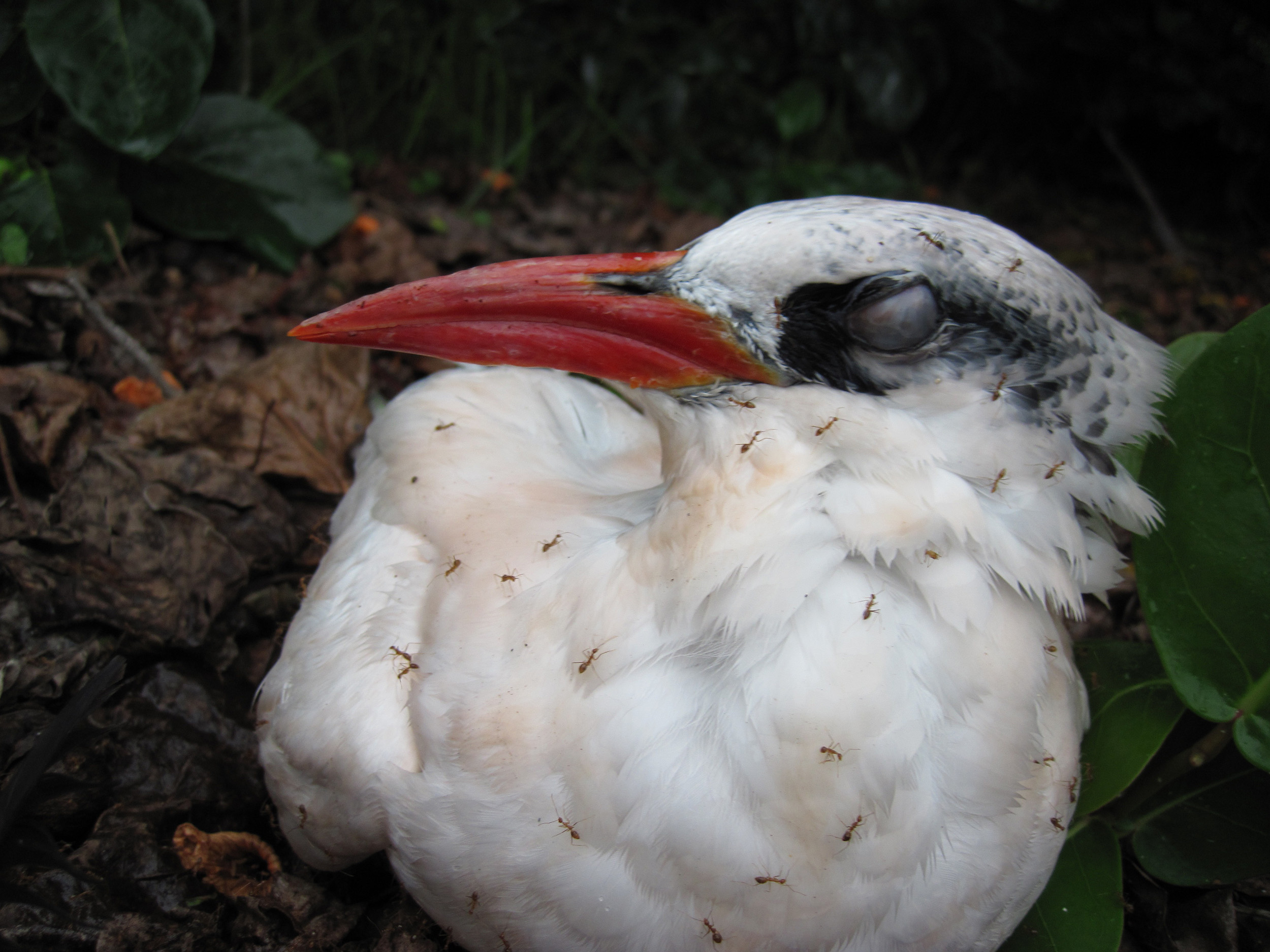 The ants were first discovered on Johnston Atoll in January 2010. “The biggest effect was that [the ants] displaced most of the seabirds,” Kropidlowski says. “The few seabirds that remained were stressed out, covered in ants—some were blind.”

Despite being neck-deep in ants on a fairly regular basis, Kropidlowski was living out something of a dream.

He’d grown up in Neenah, Wisconsin, a city of around 25,000, and graduated in 2000 with a triple major in zoology, anthropology, and biological aspects of conservation from the University of Wisconsin-Madison. From there he traveled the world, doing projects with primates in Thailand and Tasmanian devils in Australia. He saw penguins, polar bears, and plenty of birds, and decided he wanted to work with as many endangered species as he could before they disappeared. He gained experience setting up camps in Alaska and in Hawaii’s Papahānaumokuākea Marine National Monument. 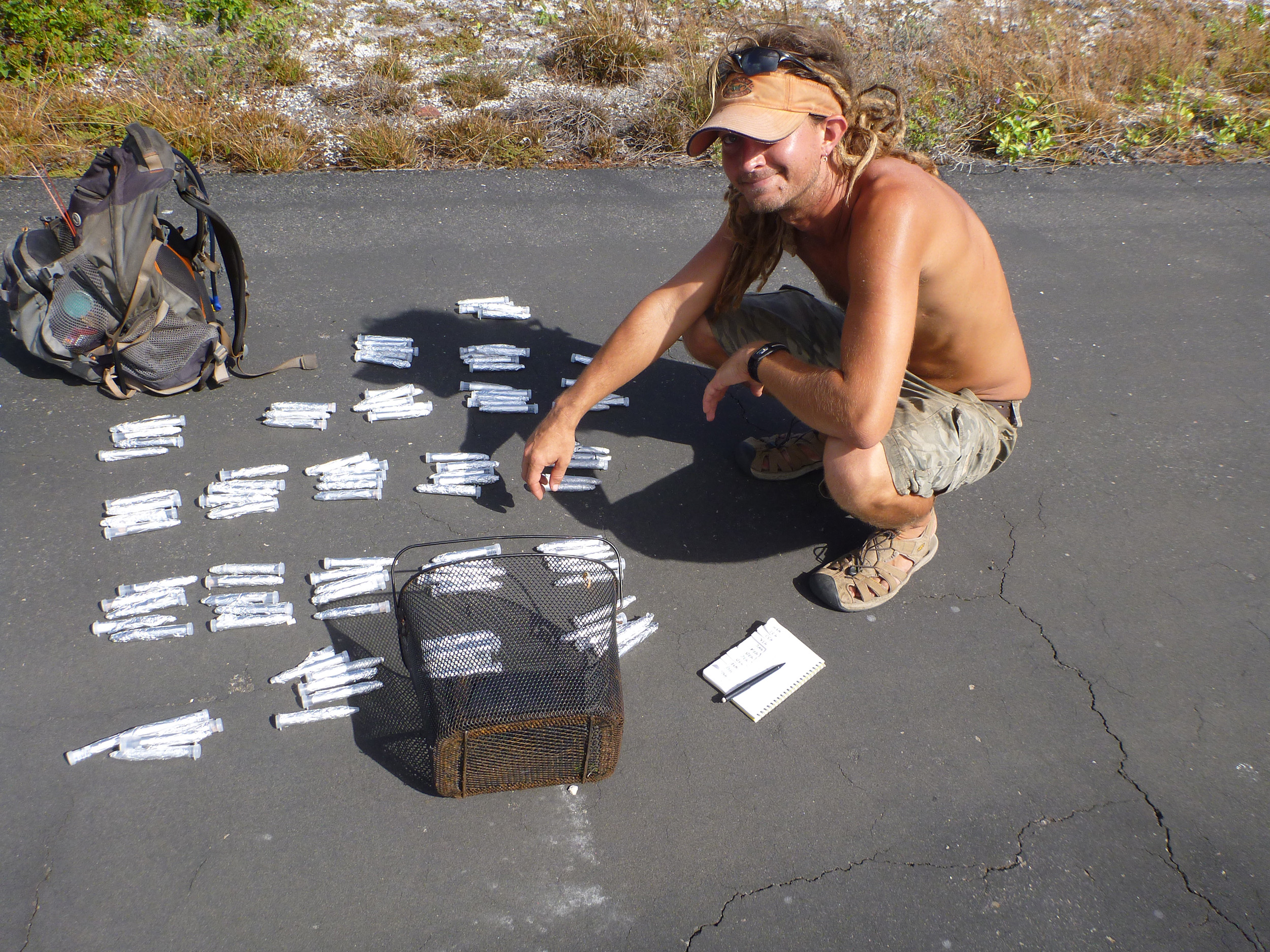 “I was a roaming biological technician who specialized in a really remote kind of habitat,” he says. And this affinity for isolation made him a perfect fit to lead CAST, a project run by the US Fish and Wildlife Service (USFWS).

On his first trip to Johnston Atoll, all the ant counting and bucket sitting amounted to torment without purpose. Four months into the nine that he and the CAST volunteers were scheduled to be on the atoll, they realized that none of the bait they’d brought would work, and instead spent their time trying to figure out what the ants like to eat. Kropidlowski jokes that his master’s thesis could have been titled: “Techniques that do not work in killing yellow crazy ants.”

The next group after Kropidlowski’s, in 2011, found the killer combination—a mixture of canned cat food and corn syrup laced with poison that CAST crews eventually began spraying at the ants using squirt guns.

Using their cat food slurry, Kropidlowski and the others on the CAST team were able to kill 99 percent of the ants in a given area on subsequent trips. But complete eradication eluded them. 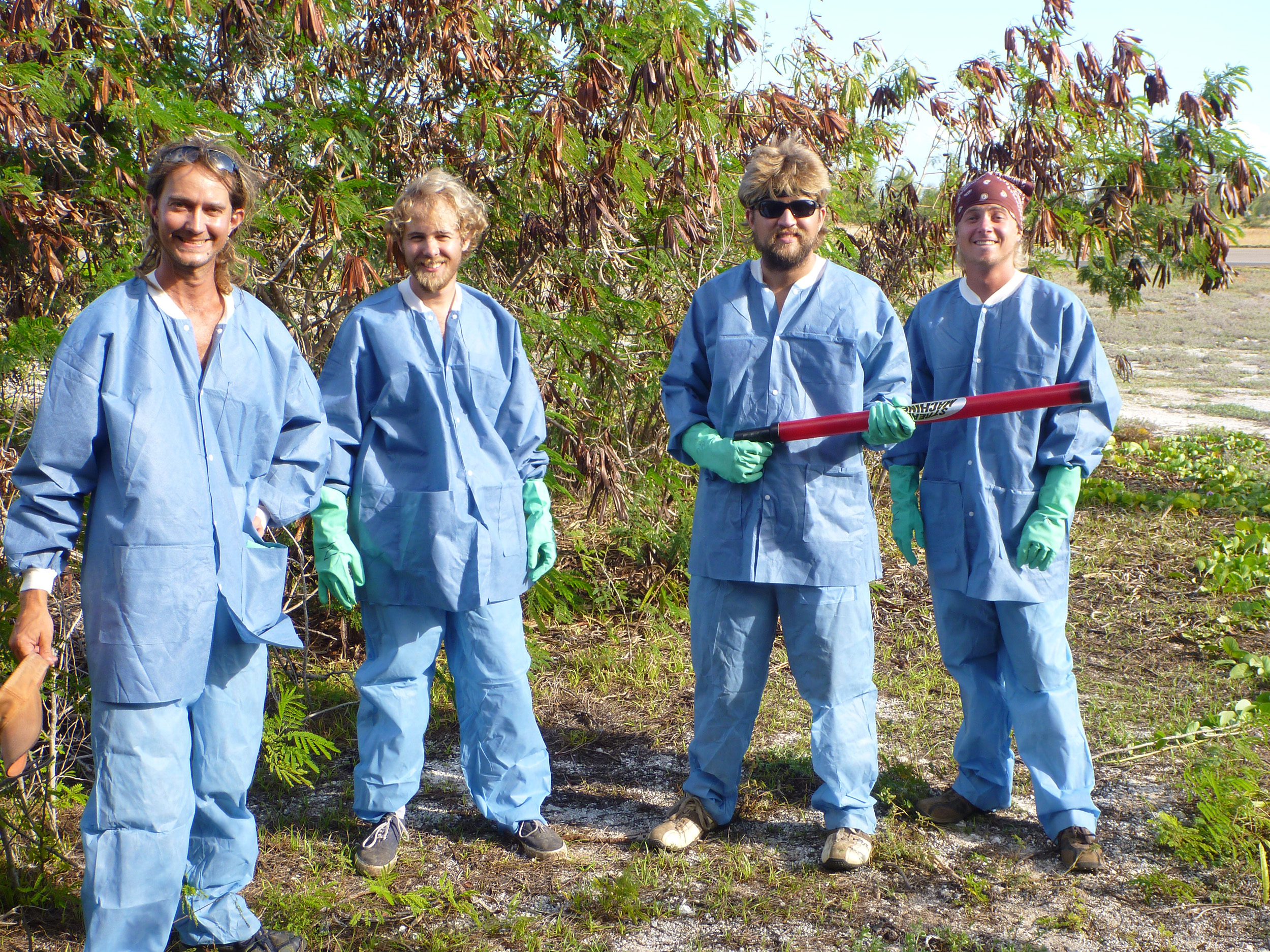 Stefan Kropidlowski, left, and volunteers from the 2012 CAST crew, dressed in ant baiting garb. One volunteer, Mike Corvell, holds one of the red squirt guns the team used to bait the ants. Photo by USFWS

“It’s really just like a puzzle,” says Greg Francois, a volunteer on the project. “It’s like you’re playing a chess game and you’re trying to get ahead of the other player. You’re trying to catch them with their pants down.”

This past summer, the team combined their cat food blend with bait gel, a substance that absorbs the poison but won’t dry up in the sun or wash away in the rain. The ants like it so much that they drag the gel deep into their lairs.

On November 9, 2015, the CAST team conducted their first survey that didn’t turn up a single crazy ant—but Kropidlowski wasn’t there to see it.

In August 2014, he’d been promoted, and traded his long, sun-bleached dreadlocks for a position as the manager of the Palmyra Atoll and Kingman Reef Wildlife Refuges for the USFWS, and his ant-covered bucket for a desk and chair in Honolulu. He still has a hand in the CAST project, though, overseeing the volunteer program.

For Kropidlowski, the ant-free survey is a personal victory. But the real winners are the red-tailed tropicbirds. After the team reached 99 percent ant eradication in 2012, around 80 breeding pairs of tropicbirds returned to nest in the former infestation area, a number that has been climbing ever since.

There are probably still a few ants hiding on the island, says Francois. But for the red-tailed tropicbirds, Kropidlowski, and all of the brave volunteers with the CAST team, the Johnston Atoll’s ant-covered nightmare seems to be over.