Harbor seals are being blamed for eating too much salmon, but new research suggests their diet is actually quite varied. Photo by Bill Gozansky/Alamy Stock Photo

Talk to salmon fishermen and they’ll tell you there are too many harbor seals on British Columbia’s Pacific coast. Since protection in the early 1970s by Canada and the United States, harbor seal numbers in the Strait of Georgia have grown from a few thousand to 40,000, the highest density in the world.

At the same time, the southern resident killer whale and salmon populations are crashing, and fingers are being pointed at the charismatic and copious seals.

Some in the scientific community agree seals are to blame, at least tongue-in-cheek. At a marine mammal symposium hosted by the University of British Columbia (UBC) in November, one poster presentation featured harbor seals’ voracity for chinook and described the pinnipeds as having “dark, emotionless eyes, [a] jovial grin, [and] insatiable hunger.” Not only that, but the poster identified the seals as wanted: “for the premature death of countless chinook smolts, [and] subsequent … starvation of killer whales.”

The only problem with this simplified portrait of blame is that the ocean ecosystem is far more complex.

Since the mid-1990s, as far back as modern record-keeping goes, juvenile chinook and coho salmon have suffered high rates of mortality. In 2014, the CAN $22-million Salish Sea Marine Survival Project (SSMSP) began investigating the reasons juvenile salmon face such daunting survival odds. One issue the project has focused on is predation by growing numbers of harbor seals.

“There’s a lot of concern over the effect they could be playing as a competitor to killer whales,” says Andrew Trites, a pinniped specialist at UBC. “The issue is, how bad are these bad boys?”

Research by Fisheries and Oceans Canada biologist Sheena Majewski shows that in the Strait of Georgia, seals enjoy a rich and varied diet that extends well beyond salmon.

UBC’s Austen Thomas previously studied scat samples collected from estuaries in 2012 to 2014, and suggested that seals are responsible for a significant amount of natural mortality in young chinook and coho salmon. 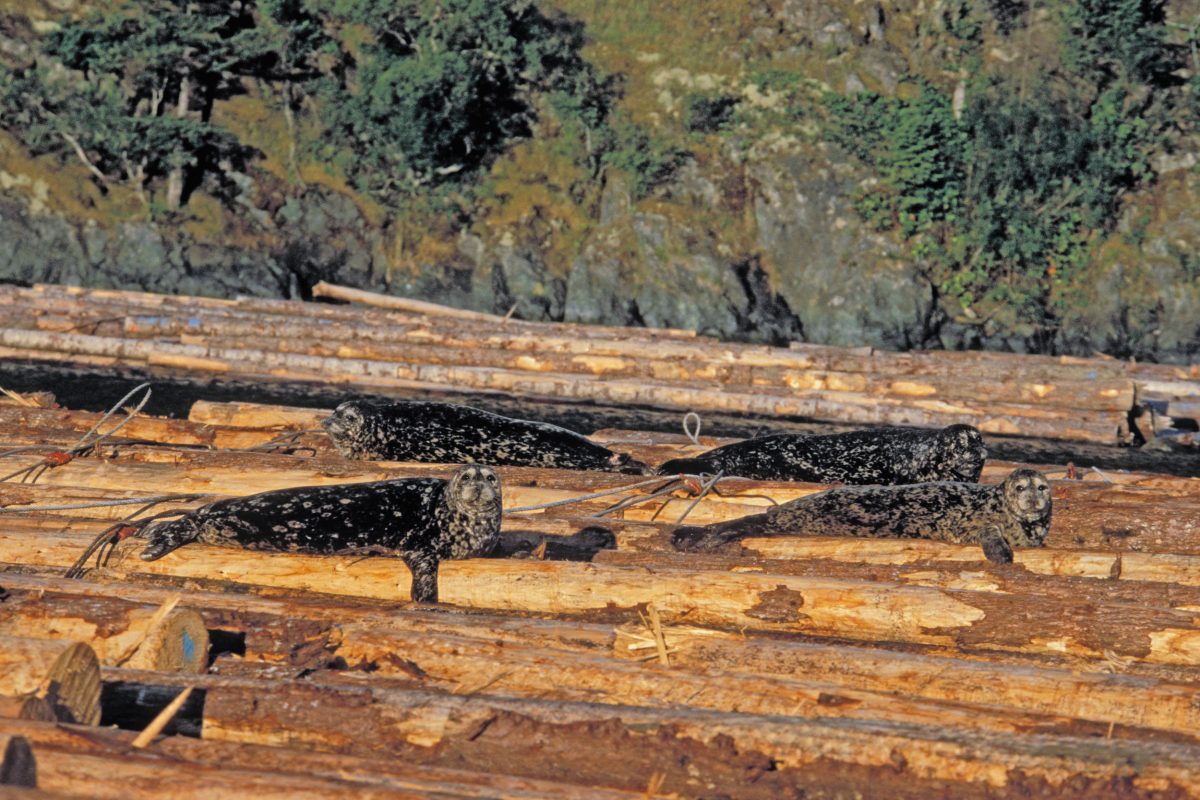 In response, Majewski and her colleagues, in work partially funded by the SSMSP, collected more than 1,300 scat samples from non-estuary haulouts in 2016 and 2017, which painted a different picture of seals’ consumptive habits based on haulout location and season.

Preliminary DNA tests of the scat samples show that salmon represent just 2.5 percent of the diet of non-estuary seals in springtime; while gadids, such as hake and walleye, make up 61 percent; and forage fish, mainly herring, comprise 24 percent.

In the fall, those numbers change, with the proportion of salmon (mostly chum) rising to 10 percent, while gadids drop to 42 percent, and forage fish hold steady at 23 percent.

These findings suggest that one cannot simply extrapolate the diet of estuary seals across the greater seal population in the Strait of Georgia.

In the fall, estuary-dwelling harbor seals’ salmon consumption does soar, rising to 35 percent. But even here, it was predominately chum salmon, with only a small proportion of chinook and coho.

Majewski is still planning to tag seals to study how long they spend at various haulout sites, how far they roam to feed, and whether some individuals are salmon specialists.

While the research shows that salmon represents only a minority of seals’ diet, there’s a hitch.

Seals eat more salmon in the fall, when adult fish return to rivers to spawn, while in spring, they target juvenile fish migrating from rivers to the ocean. Previous research shows that a harbor seal needs 100 small fish to match the nutritional benefits of less than one adult salmon. So even if seals eat proportionately fewer salmon in the springtime, they may still be having an effect on the population.

“Translate it to biomass and it’s not very much,” says Trites. “But put it to numbers of fish, and it’s huge.”

The research contributes to an ongoing shake-up of scientists’ understanding of the marine ecosystem that is reframing how much blame ought to be laid on harbor seals for the ongoing plight of salmon and whales. 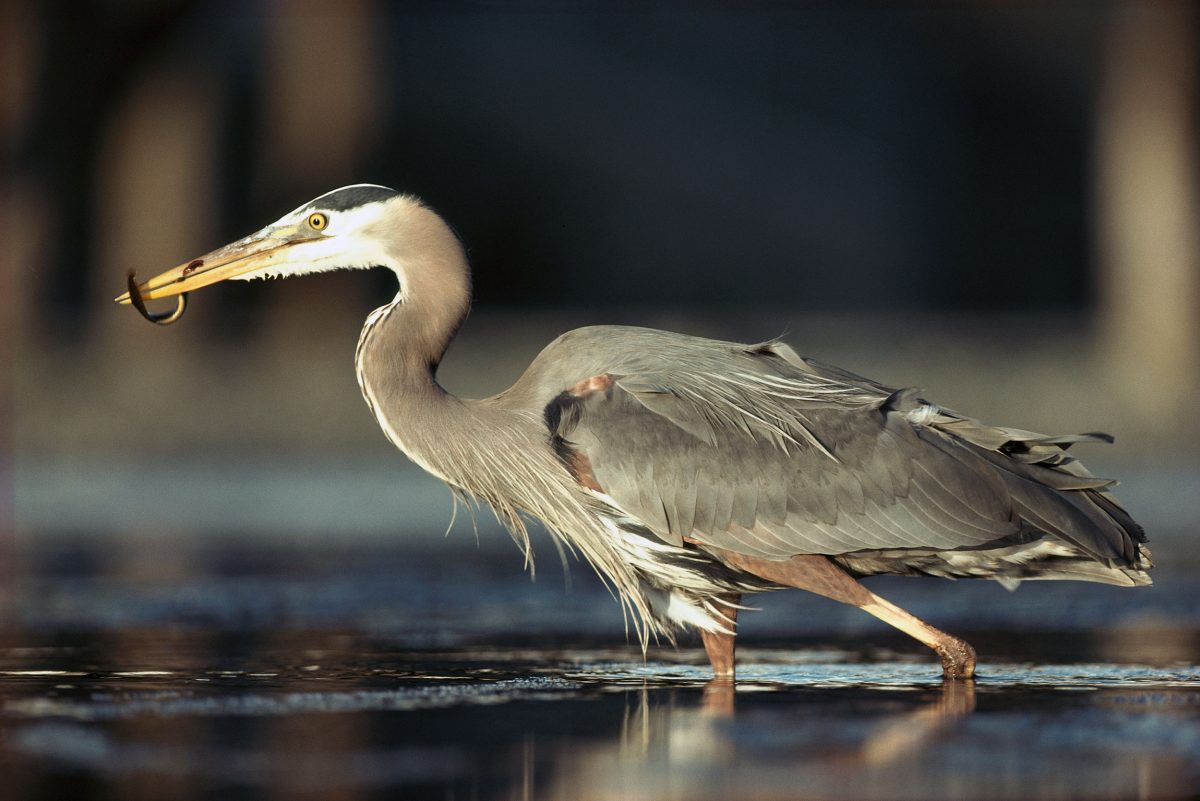 Research shows that salmon populations are being picked off by a wide variety of predators, including great blue herons. Photo by Tim Fitzharris/Minden Pictures

Along that line, another recent study shows that the great blue heron, a picture of quiet stoicism along shorelines and estuaries, is exacting its own toll on salmon populations. A search of scats below a Cowichan Bay, British Columbia, heron rookery found 406 research tags that had been used to track chinook smolts. This bounty suggests herons are eating almost five percent of the smolts that make it to the lower Cowichan River.

Human-influenced climate change may be reducing salmon survival by warming the North Pacific; while low water levels in streams, caused by a warming planet, can expose juveniles to predation.

“It just shows how complicated it is,” Majewski concludes. “We have to be pretty cautious at pointing fingers. We have to look at the whole ecosystem.”