Nitrate-rich agricultural runoff, full of excess fertilizers, can cause algae blooms that seriously damage the ecosystem in nearby wetland waterways. Photo by Alice Bourget

For more than 100 years, the coastal wetlands of central California have been drained and graded to allow for farming. In one area near the town of Moss Landing, what was once slough is now 450 hectares of artichokes, strawberries, Brussels sprouts, and lettuce—a bounty of growth. And fueling it all? Nitrate-laden fertilizer, the runoff of which pollutes waterways, wetlands, and the nearby ocean. Farmers clearly appreciate the yields that fertilizers facilitate, but many acknowledge that these chemicals are tainting the land and water. Enter the Central Coast Wetlands Group and the Coastal Conservation and Research, Inc. and their new bioreactor designed to process agricultural runoff, turning algae-bloom-triggering waste into benign nitrogen gas.

In 2017, on what was a long, flat stretch of fallow dirt flanked by crop fields, the group built a prototype multi-chamber bioreactor system. Featuring 12 separate channels approximately 25 meters long, 1.5 meters wide, and less than one meter deep, the system is fed by runoff from an agricultural ditch. Each channel contains materials like woodchips and native aquatic plants that also house bacteria, which under low oxygen conditions pull oxygen atoms off nitrate molecules. The bacteria respire this oxygen and release nitrogen gas into the atmosphere. 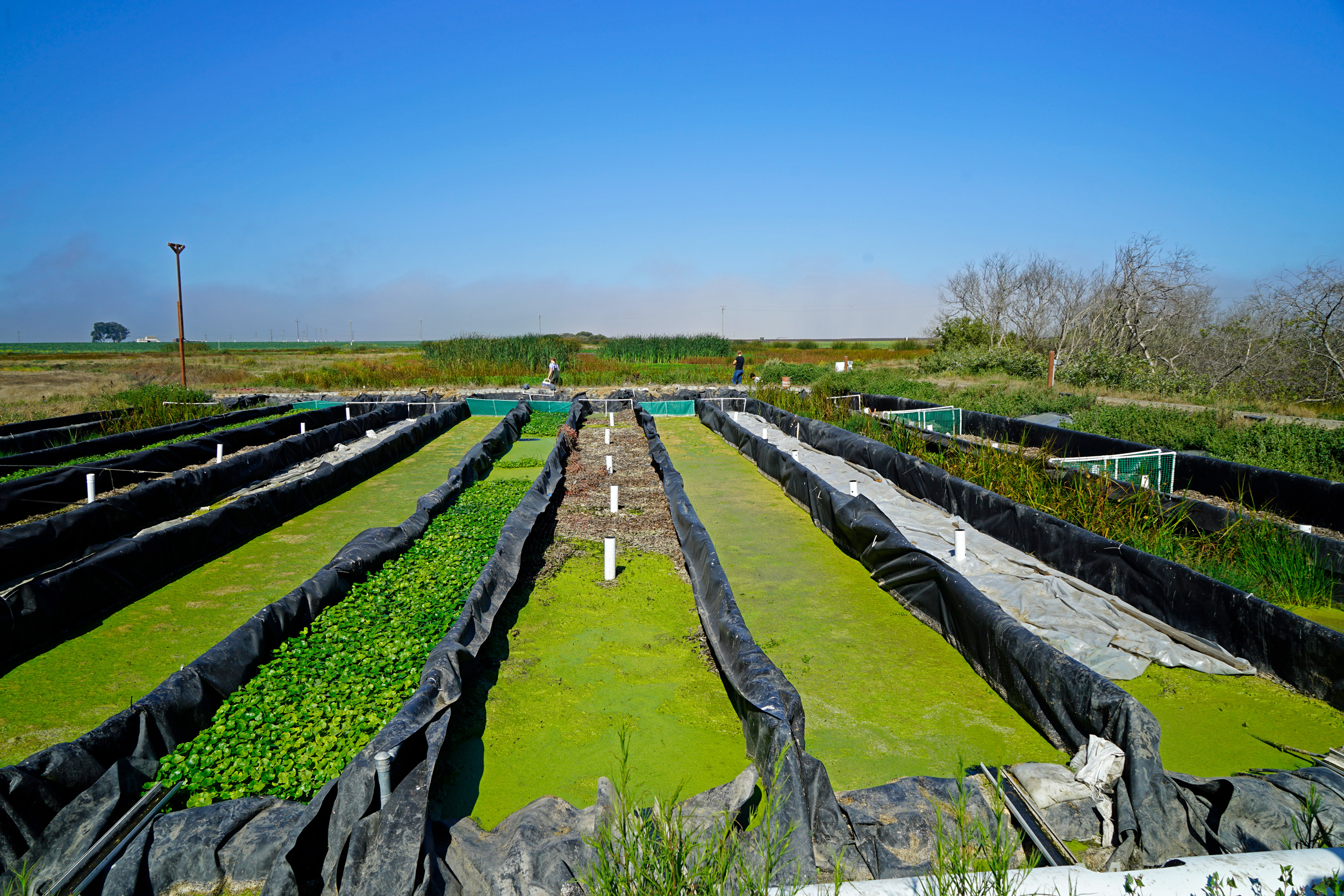 Researchers are experimenting with bioreactors that remove nitrate from the water, releasing it as harmless nitrogen gas. Photo by Alice Bourget

Over the years, the researchers have introduced new variables to the bioreactor channels to test their efficiency. For example, to see if a temperature boost increases biological productivity, they’ve tried insulating and covering the channels, and heating the water with solar heat exchangers. In other channels, they’ve used aeration to push nutrients to the surface. They’re constantly checking the water’s concentration of dissolved oxygen because it’s the most important indicator of biological activity. They’ve found that there is considerably more dissolved oxygen in the woodchip channels than the non-woodchip channels, though they’ve seen little difference between the insulated and non-insulated woodchip channels. They plan to monitor the active heating experiments this winter.

One of the group’s main goals, says project manager Jason Adelaars, is to design bioreactors that farmers can use to reduce—or possibly eliminate—their nitrate runoff, and thereby avoid a regional fee for discharging polluted water. After refining their data, the researchers intend to approach local farmers with measurements from the runoff of specific acreages and suggest the size and type of bioreactor that would be most effective for their farms.

A central question for the group, says Adelaars, is how to scale the bioreactors to fit an individual farmer’s needs and to determine the costs of custom bioreactor production, which will vary based on reactor size and woodchip availability. At the moment, a local landfill offers waste woodchips for free.

As part of the project, the team also developed seven hectares of wetlands to receive water from the prototype channels and further process it. Perhaps the ultimate testament to the bioreactor’s abilities, the wetlands have boosted biodiversity. “The birds came in, there are bugs, there are endangered species in there. We turned it into this awesome productive habitat,” says Adelaars.

Two years of data shows tremendous promise in the efficiency of the bioreactor. The woodchip processing strips at least half of the nitrates out of the water, and when it is further filtered through the adjacent wetlands almost all of the nitrates are removed. Wetlands creation or enhancement might also be a part of the group’s eventual offerings.

Pam Krone, the agricultural water quality coordinator for the Monterey Bay National Marine Sanctuary in California, says bioreactors like this one “hold much promise for removing agricultural chemicals, including nutrients and pesticides, from drainage water leaving farms.”

“As the cost and areal footprint of bioreactors lessens, they will become more affordable for on-farm treatment. This will reduce the pollutants that enter the ocean and create a healthier marine ecosystem,” Krone says.

California coastal wetlands that were transformed into farms will continue to produce a bounty. But with bioreactors reducing pollutant runoff, the surrounding wetlands will be preserved, a win-win-win for farmers, consumers, and the environment.