Blue holes, like the Great Blue Hole in Belize, are vast caverns that descend into the seafloor. Sediment accumulates at the bottom of a blue hole, giving researchers a way to gauge historical hurricane activity. Photo by Ian Bottle

The 2021 Atlantic hurricane season was the third most active in 171 years of record-keeping. The 2020 season was even worse—there were so many tropical cyclones that meteorologists tore through their list of possible storm names and needed the Greek alphabet to keep track of the overflow. But a new study shows that even this flurry of activity may be something of a lull in the centuries-long record of Atlantic hurricanes.

The evidence that hurricane activity is at a historical low is hiding on the Caribbean seafloor, tucked away in odd geological features called blue holes. These open pits form in limestone, often above collapsed caverns. Prolonged erosion weathers the edges into an eerily circular shape.

Blue holes are similar to sinkholes but on a much grander scale. They can be 300 meters deep, like the Dragon Hole in the South China Sea, or 300 meters wide, like the aptly named Great Blue Hole in Belize. The Bahamas is home to the world’s greatest concentration of blue holes, making it an appealing destination for paleotempestologists—scientists who study historical tropical cyclone activity.

The seafloor at the base of a blue hole acts like a calendar of past storms. Much like an ice core or tree ring grows season after season, the sediment at the bottom of a blue hole builds up over time. Natural currents coax a sugary sprinkle of small sand grains into the hole, while violent hurricanes pitch larger grains into the pit. By comparing layers of coarse and fine grains in this sedimentary lasagna, researchers can count how many hurricanes passed nearby. What makes a blue hole a valuable long-term record is that once this sediment settles, there’s very little activity in the pit to disturb it.

Hine’s Hole, a 340-meter-wide hole that penetrates the seafloor in the western Bahamas, offers a prime example of a blue hole hurricane record. It sits halfway between Cuba and the Florida Keys and is far from any landform, so it can chronicle weaker storms that blow in from any direction. The base of the hole is also low in oxygen, so no animals live there to disrupt the delicate sediment. A steady surface current shooting over the hole sends two to three centimeters of sand tumbling into Hine’s Hole each year.

Hine’s Hole, says Tyler Winkler, a geologist at the Woods Hole Oceanographic Institution in Massachusetts who led the study, has the highest sedimentation rate of any blue hole he and his colleagues have seen.

For the new study, Winkler and his team drilled 18 meters into the sediment at the bottom of Hine’s Hole, recovering cores representing the past 540 years of deposition. After comparing the top layers to the modern hurricane record, the researchers have high confidence that Hine’s Hole recorded every Category 2 or higher hurricane within 75 kilometers. Analyzing the cores even further shows that the number of tropical cyclones roiling this corner of the Bahamas is in a historical lull.

“Over the last 170 years, we’ve had about five hurricanes per century on average,” Winkler says of the local record from Hine’s Hole. “But the rate has been almost eight times that in the past.” 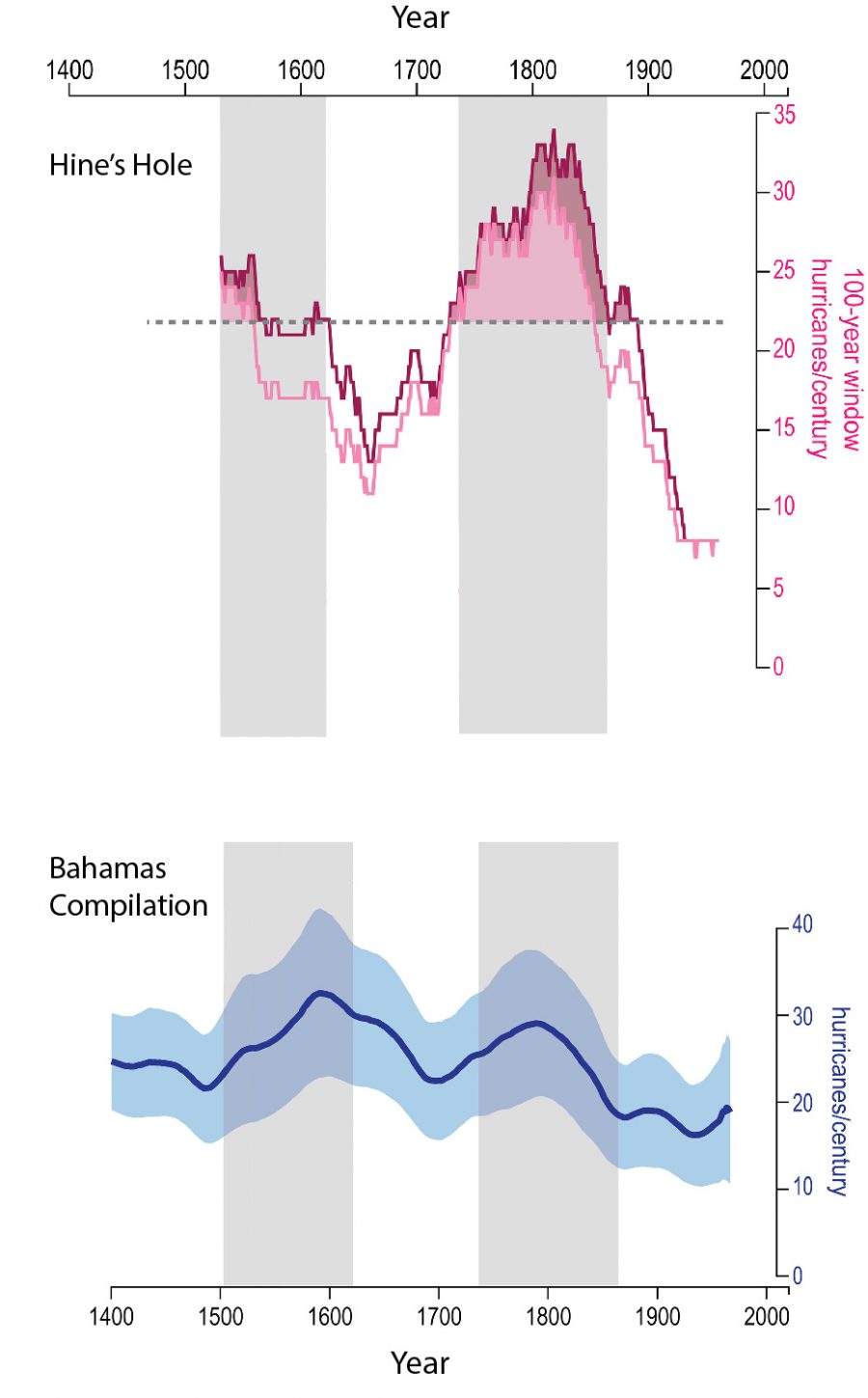 By analyzing the sediment records from the bottoms of blue holes, researchers have reconstructed historical hurricane activity. The first graph shows the trend in hurricanes larger than a Category 2 hitting within 75 kilometers of Hine’s Hole in the Bahamas. The second graph shows an average record drawn from blue holes throughout the region depicting a similar—if less dramatic—trend. Illustration by Winkler et al.

According to the research, the area around Hine’s Hole has experienced major swings in storm frequency since 1480. The team cross-checked their findings with other Bahamian blue holes, as well as with tree rings and even ship captains’ logs. The study shows that hurricane activity has dipped since the 1860s, shortly after modern record-keeping began. That means every hurricane since Alfred Nobel invented dynamite has occurred during a historically quiet period in the area.

Sediment cores extracted from blue holes are important, says Hali Kilbourne, a climate researcher at the University of Maryland Center for Environmental Science who was not involved in the study, because they can provide a glimpse of the preindustrial era. “That’s something the instrumental records can’t do,” she says. As a bonus, the limestone shelf of the Bahamas is rich with blue holes. “They’re in the perfect spot,” she says.

Winkler and his team plan to return to Hine’s Hole to dig even deeper to gain more context for the current lull. There is at least 60 meters of accumulation at the bottom of Hine’s Hole, which could illuminate more than 2,000 years of hurricane history.

“That’s why this particular site is so important,” Winkler notes. “There’s nowhere else we’ve encountered yet that has the potential longevity and resolution for storm activity.”

Hine’s Hole shows that in the preindustrial era before record-keeping began, the Bahamas experienced far more annual hurricanes than it does now. If that heightened activity returns, even the Greek alphabet may not be enough to keep track of them all.