Providence, Rhode Island is a hotspot for global sea level rise, which could be a point of stress for some coastal dwellers. Photo by Sean Pavone/Alamy Stock Photo

Kate Schapira is seated behind a small booth at the entrance to Burnside Park in Providence, Rhode Island. Her stall bears a hand-painted sign offering psychological counseling, just like Lucy’s “the doctor is in” stand from Peanuts. Since 2014, Schapira has set up her booth regularly from spring to fall, and offered her ear for five cents. Like Lucy, Schapira is not a trained psychologist, but the casual nature of the booth and the amusing inspiration encourages people to stop to talk. When someone stops, she asks the same question: “Are you worried about climate change, and if not, what are you worried about?”

People give all sorts of answers, which Schapira has been documenting on her blog. Some people are stressed about extreme weather, recalling superstorm Sandy, which ravaged the area in 2012. Others have a more generalized anxiety: they talk about increasing global temperatures, droughts, and melting ice caps.

Providence sits right on the coast, and Schapira thinks residents’ concerns are magnified by this close proximity. “It’s sort of two-fold,” she says, elaborating that the coast not only provides a local context for global climate change, but the creatures that live there provide a concrete window into the effects of climate change on vulnerable ecosystems.

In the psychological literature, there is an increasing body of research demonstrating the toll that climate change can take. Climate change can affect mental health both as a result of individual significant weather events, and as a result of more gradual changes in climate. Psychologists have found that catastrophic events induce different mental health issues than gradual changes: catastrophic events are more likely to induce trauma responses, major depression, and complicated grief, while gradual changes can cause anxiety, fatalism, and chronic depression.

A common thread running through all these effects is fear of an increasingly uncertain future, and the anxiety that fear generates is often not constructively addressed. Climate scientists, who spend their working lives detailing the nuances of the planet’s increasingly grim prospects may be particularly susceptible to climate-related mental health issues, but the general public is also at risk. 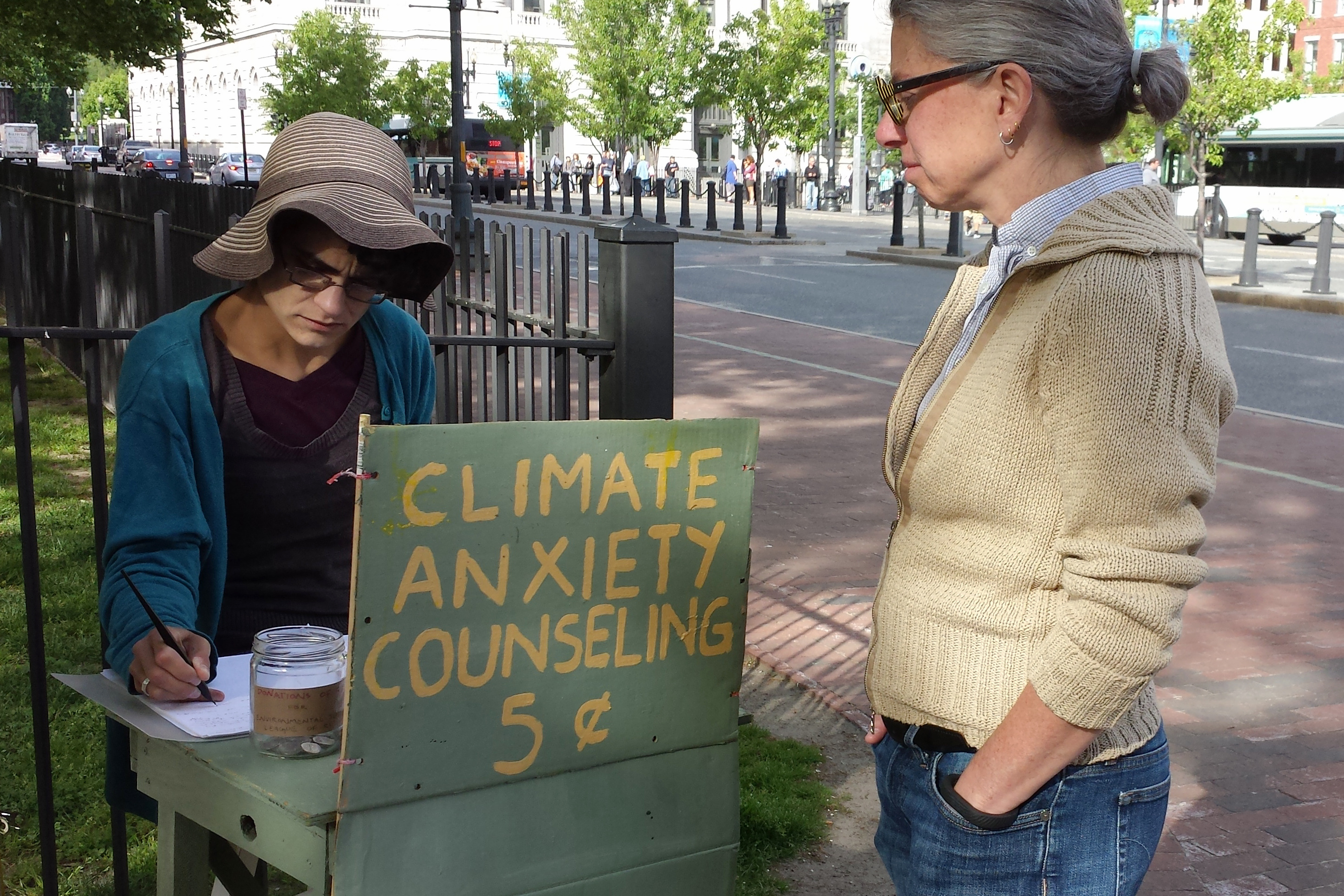 Schapira started her project because, in the snowy New England winter of 2013, she was gripped by a sudden and profound sense of despair over the ecological collapse of coral reefs. Whether this surge of anxiety was due to her suddenly becoming aware of the problem, or an increase in research and writing about reefs, Schapira can’t say. But she was profoundly upset, and her sadness baffled her friends: how was something so distant suddenly making her so miserable? Frustrated by her sudden sorrow and feeling of isolation, Schapira set out to see whether other people were being similarly affected by the prospects of climate change.

In reality, Schapira is an unlikely candidate to be running a climate anxiety counseling booth. She has no formal background in either science or psychological counseling—she’s a poet and an English professor at Brown University. She readily admits that she’s often unable to evaluate the science of climate change on her own, and relies on the authority of the scientific community.

But her experience working through creative processes as an artist is key to her booth conversations, she says. When she talks to passersby, she focuses on their relationship with their environment, rather than the science itself. Climate change can be overwhelming, and how scientists and citizens cope with climate anxiety is a growing area of research. By centering the conversation on an individual’s relation to their local environment, Schapira is hoping to make the anxiety less overwhelming. When she asks people to envision their anxieties, she walks them through how they would respond if their fears were realized, and occasionally suggests ways in which people can contribute to local efforts to mitigate the effects they are worried about.

However, Schapira says she’s cautious about providing concrete solutions to assuage people’s anxieties, for fear of providing false security. “The best that I can say is that people often seem glad that they talked with me, and that they have articulated a fear that they have or a concern that they have, even if the fear has not gone away.” Her observations suggest that having an accessible forum to talk about climate change without it spiraling to dire pessimism has a positive effect on people who stop to talk.

Schapira may be having more of an impact than she admits. Janaya Kizzie is a writer and a friend of Schapira’s, and she has stopped at the booth a few times to talk about her carbon footprint. She feels that Schapira’s project is having a tangible positive impact on the community, and has noticed that since talking with her she is unconsciously making an effort to be more mindful of the local environment. “She’s taking us through the process from problems to solutions in a way that doesn’t leave out all the feelings involved,” she adds.

Schapira’s project has provided at least one solution: she herself feels less alone and more hopeful that her community can become more resilient to the effects of climate change. The casual, accessible nature of her project means that she frequently talks with indigent people who are often left out of conversations about dealing with climate change. Her efforts to be pragmatic but not fatalistic allow people in her community to see that there are ways in which they can work together for a more stable future. Schapira donates the nickel she charges for her service to the Environmental Justice League of Rhode Island, and occasionally directs people to various environmental community groups.

While Lucy’s advice is usually unhelpful, Schapira has found a novel way to engage with her community through talking and listening. The community around her is stronger as a result of her project, and she intends to continue her work for the foreseeable future. 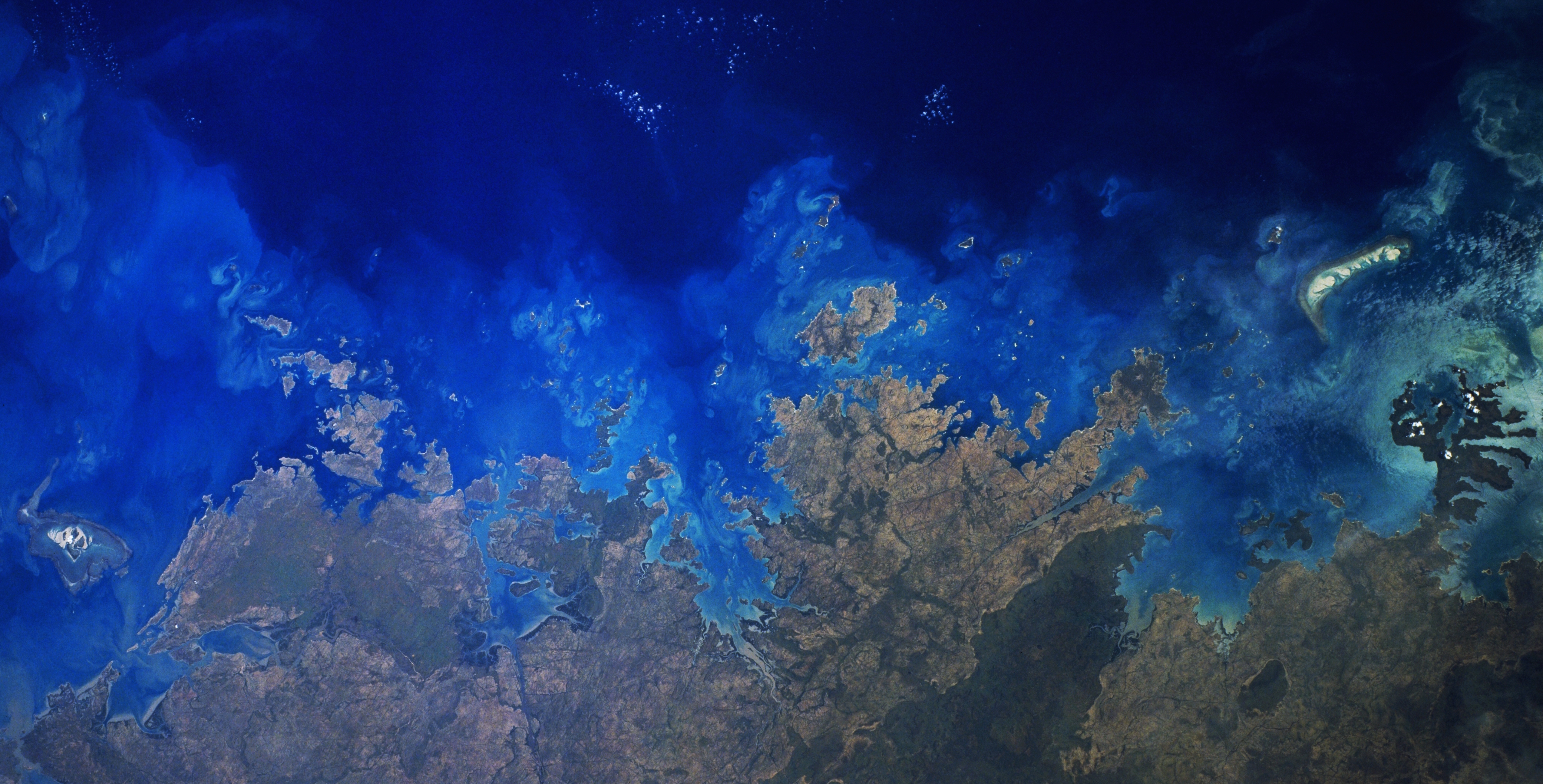