Malaysia’s Federal Highway from Kuala Lumpur to the port of Klang shut down due to flooding last December. Photo by Afif Abd Halim/NurPhoto via Getty Images

This story was originally published by Yale Environment 360 and is reproduced here as part of the Climate Desk collaboration.

The COVID-19 pandemic has rightly received most of the blame for global supply chain upheavals in the past two years. But the less publicized threat to supply chains from climate change poses a far more serious threat and is already being felt, scholars and experts say.

The pandemic is “a temporary problem,” while climate change is “long-term dire,” says Austin Becker, a maritime infrastructure resilience scholar at the University of Rhode Island. “Climate change is a slow-moving crisis that is going to last a very, very long time, and it’s going to require some fundamental changes,” says Becker. “Every coastal community, every coastal transportation network is going to face some risks from this, and we’re not going to have nearly enough resources to make all the investments that are required.”

Of all of climate change’s threats to supply chains, sea level rise lurks as potentially the biggest. But even now, years before sea level rise begins inundating ports and other coastal infrastructure, supply chain disruptions caused by hurricanes, floods, wildfires, and other forms of increasingly extreme weather are jolting the global economy. A sampling of these disruptions from just last year suggests the variety and magnitude of climate change’s threats: 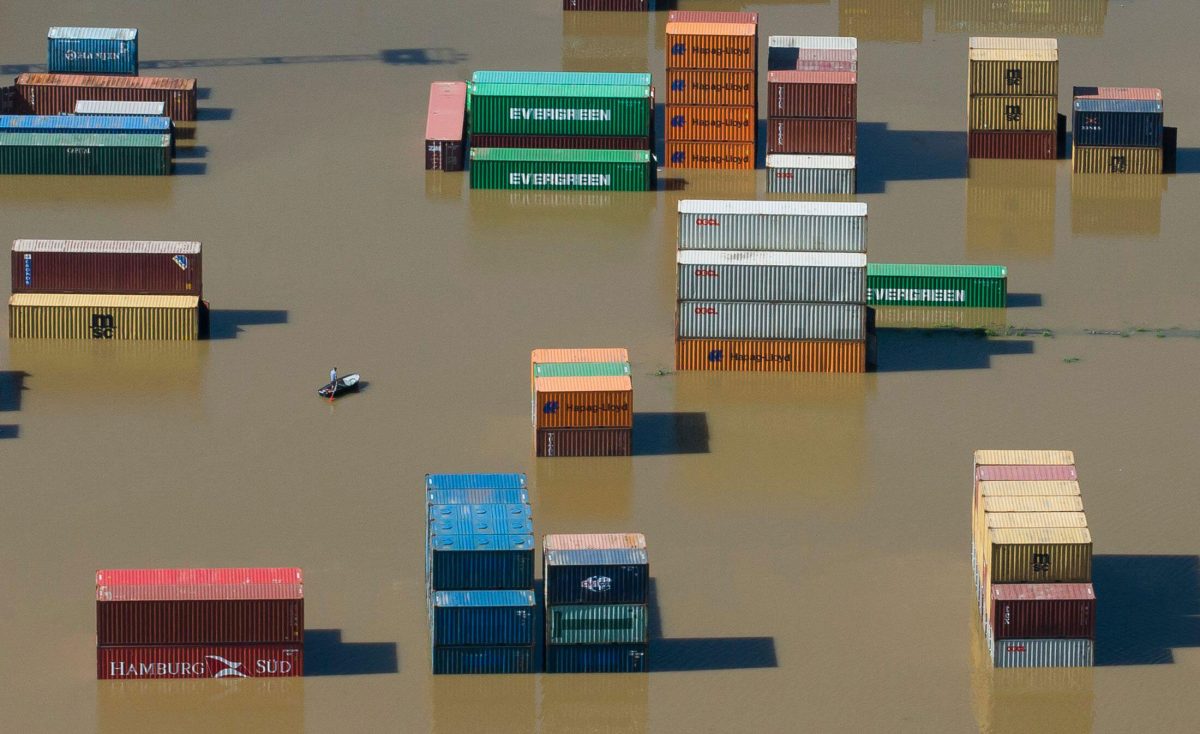 “The Malaysia node in the global supply chain that hardly anyone was aware of turned out to be critical,” Christopher Mims, a Wall Street Journal technology columnist and author of Arriving Today: From Factory to Front Door—Why Everything Has Changed About How and What We Buy, says. “It illustrates how a bottleneck anywhere in the supply chain can interfere with the availability of critical goods.”

Scientists say that such climate-related disruptions are bound to intensify in coming years as the world warms. In addition, ports, rail lines, highways, and other transportation and supply infrastructure will be threatened by increases in sea level of an estimated 60 to 180 centimeters —and perhaps more—by 2100. Around 90 percent⁠ of the world’s freight moves by ship, and, according to Becker, inundations eventually will threaten most of the world’s 2,738⁠ coastal ports, whose wharves generally lie just above sea level to as high as 4.5 meters. But to most port managers, the threat still feels remote. The rate of future sea level rise is so uncertain⁠ and solutions so elusive that only a few⁠ port managers have taken action to counter the threat, and only a fraction have tried to assess it.

As the ripple effects of what are likely to be ever-increasing and intensifying climate-related disruptions spread through the global economy, price increases and shortages of all kinds of goods—from agricultural commodities to cutting-edge electronics—are probable consequences, Mims says. The leap in the cost of shipping a container across the Pacific Ocean as a result of the pandemic—from US $2,000 to $15,000 or $20,000⁠—may suggest what’s in store.

A 2020 paper⁠ in Maritime Policy and Management even asserted that if current climate science is correct, “global supply chains will be massively disrupted, beyond what can be adapted to while maintaining current systems.” The paper argues that supply chain managers should accept the inevitability of economic upheaval by the end of this century and embrace practices that support rebuilding afterward.

To be sure, not all experts believe supply chains are highly vulnerable to climate change. “I don’t lie awake at night thinking about what will happen to supply chains because of climate,” says Yossi Sheffi, director of the Massachusetts Institute of Technology’s Center for Transportation and Logistics and the author of numerous books about supply chains. “I think supply chain disruption is usually local and limited in time, and supply chains are so redundant that there are many ways to get around problems.”

Supply chains are, in essence, strings of potential bottlenecks. Each stopping point is a node in a treelike system that conveys raw materials from the system’s farthest tendrils to sub-assemblers along its roots to manufacturers, who are the system’s trunk. Products like smartphones possess hundreds of components whose raw materials are transported from all over the world; the cumulative mileage traveled by all those parts would “probably reach to the moon,” Mims says. These supply chains are so complicated and opaque that smartphone manufacturers don’t even know the identity of all their suppliers—getting all of them to adapt to climate change would mark a colossal achievement. Yet each node is a point of vulnerability whose breakdown could send damaging ripples up and down the chain and beyond.

Seaports are particularly vulnerable. Port authorities have three ways to cope with sea level rise and all are inadequate, experts say. They can retreat to inland locations with river links to oceans, but available sites with requisite conditions are few and expensive. They can build costly sea dikes around the ports, but even if the dikes are strong enough to resist the rising ocean, they must continually be raised to keep up with sea level rise, and only buy time until eventually being overtopped. They also divert floodwater to nearby coastal areas unprotected by the dikes. 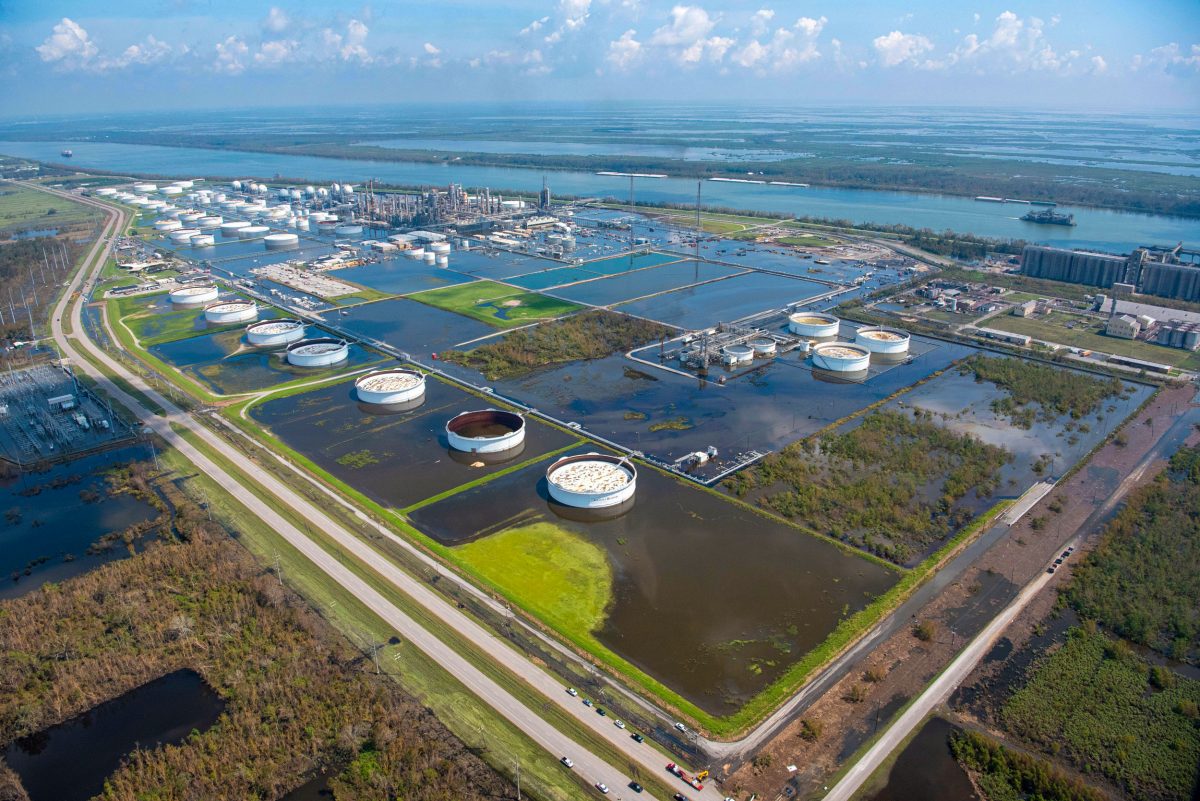 Finally, port officials can raise by at least a couple of meters all port infrastructure so that the port can continue to function as sea level rise proceeds. But the rate of the rise is so uncertain that choosing a cost-effective height for the increase is problematic, Becker says. And raising wharves and other port infrastructure would still leave unprotected⁠ ports’ vital ground transportation links—railroads and highways—and, for that matter, the residents of adjoining cities.

In a 2016 paper⁠ in Global Environmental Change, Becker and four colleagues concluded that raising 221 of the world’s most active seaports by two meters would require 436 million cubic meters of construction materials, an amount large enough to create global shortages of some commodities. The estimated amount of cement—49 million tonnes—alone would cost $60-billion in 2022 dollars. Another study that Becker coauthored in 2017 found that elevating the infrastructure of the 100 biggest US seaports by two meters would cost $57-billion to $78-billion in 2012 dollars (equivalent to $69-billion to $103-billion in current dollars), and would require “704 million cubic meters of dredged fill … four times more than all material dredged by the Army Corps of Engineers in 2012.”

“[The United States is] a rich country,” Becker says, “and we’re not going to have nearly enough resources to make all the required investments. So among ports there’s going to be winners and losers. I don’t know that we’re well equipped for that.”

The long-term nature of sea level rise, combined with the deficiencies and expense of the proposed solutions, have largely prevented seaport managers from addressing the threat. A 2020 study in Journal of Waterway, Port, Coastal, and Ocean Engineering that Becker coauthored found that of 85 US maritime infrastructure engineers who responded to a survey, only 29 percent said their organizations even had a sea level rise policy or planning document, let alone had acted on one. In addition, the federal government offers no guidance on incorporating sea level rise projections into port design. “This leaves engineers to make subjective decisions based on inconsistent guidance and information,” the study said, and “leads to engineers and their clients disregarding [sea level change] more frequently.”

In response to the threat of increasing supply chain disruption, manufacturers are considering enlarging their inventories or developing “dual supply chains”—supply chains that deliver the same goods via two different routes, so that if one breaks down, the other will prevent shortages. But both solutions would increase production costs, and would contradict the still-predominant “just-in-time” manufacturing approach, which relies on robust supply chains to eliminate the need for companies to keep extensive parts inventories in stock. US companies could shorten their supply chains, shifting production facilities back to the United States or a nearby country, but in many cases they would be removing their factories from the constellation of suppliers that grew up around them in countries such as China and Vietnam.

On top of all this, there’s a built-in inertia in supply chain management. “[Long-term] strategy and logistics are opposite things,” Dale Rogers, a business professor at Arizona State University, says. “Logisticians are always trying to execute the strategy but not necessarily develop it. They’re trying to figure out how to make something happen now, and climate change is a long-term problem.”