The Indonesian government has been on a coal-plant-building spree. In addition to the pollution that comes with burning coal, communities worry that transporting coal to the plants will further endanger the environment. Photo by Hilmawan Nurhatmadi/Alamy Stock Photo

Indonesia is experiencing a coal power boom, particularly on Java, the most populous island in the world. One of the dozens of planned plants, Java 7, will be operational by October, and its construction has already left some communities questioning the wisdom of the development amid an emerging opposition to coal expansion nationwide.

Residents in Banten, the island’s westernmost province, have already reported decreases in fish catches and agricultural yields since construction began in April 2016.

“Their catch is as low as 50 percent compared to before the existence of the coal power plant,” says Pius Ginting, coordinator of the Indonesian NGO Association of People’s Emancipation and Ecological Action. “Moreover, their costs have increased, because they need to go a bit farther to fish.”

Java 7 is less than six kilometers from Terate, a village in Banten, and encroaches on its traditional fishing grounds. Residents of Pulau Panjang, an island at the head of the bay where Java 7 is located, are also affected: construction has compromised access to the sea and coal-carrying ships will soon do the same.

“Their fishing area is located in the passageway of the ships,” Ginting says.

Indonesia relies heavily on coal, which fuels 54 percent of its power generation, compared to 26 percent from gas, seven percent from oil, and 12 percent from renewable sources. One reason that the government promotes centralized coal generation is the country’s abundance of coal reserves, mostly on the island of Borneo. As demand has dropped from key exports markets, most notably China and India, increasing domestic consumption has become a national priority.

The government of Indonesia, the world’s largest archipelago nation, identified its coastlines as prime locations for the electricity-generating coal plants because they require large and reliable sources of water to produce steam power. Another reason for coastal placements is the nation’s reliance on the sea to transport coal from Borneo to Java. 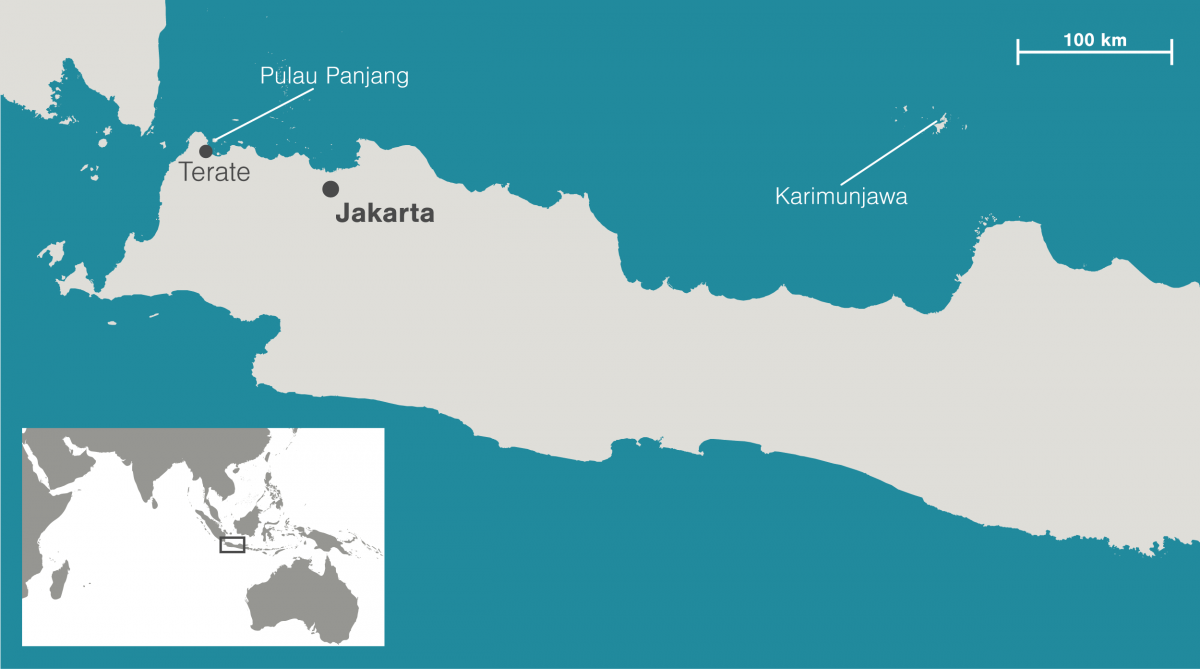 Coastal communities, however, rely on that same environment for fishing, transportation, and recreation, and burning coal often leads to pollution. In a 2017 paper, researchers from the University of Wisconsin and the University of Virginia found that sea-based transport has a significant environmental impact on the climate and water quality.

“Coal releases a range of toxic substances into the environment. These go into the atmosphere, rain, groundwater, and seawater, and then to flora, fauna, and people,” says David Obura, an ecologist and fellow at the University of Queensland in Australia who studies the environmental impacts of coal-fired plants on coastal communities.

This is worrying because Indonesia has weak standards for both air and water emissions from plants compared to the United States, Europe, and China. Moreover, coal barges often wait at sea, blocking access to fishing grounds and sometimes damaging coral reefs with their anchors and keels, which places natural areas relatively far from coal plants at risk. One of Java’s top diving and beach tourism destinations, Karimunjawa, abuts a coal route that supplies several plants that will soon include Java 7. Open-air barges have already damaged the area’s reefs and polluted the water. Locals worry the situation will worsen if more plants come online and more ships transit through the coastal environment.

“Right now, we need about one million tonnes of coal for existing coal plants and it will double to two million tonnes for fulfilling future coal plants’ demand,” says Adila Isfandiary, a researcher with Greenpeace Indonesia. Regular coal transport is worrisome enough, but Greenpeace Indonesia is also concerned about the potential for greater disasters, such as what happened earlier this year when two barges collided in Pelabuhanratu in the province of Java Barat, dumping huge amounts of coal into the sea.

“This could happen more often once all of the coal power plants are operating in Indonesia,” Isfandiary says.

There is local opposition to the proposed plants, but it is fragmented: village leaders are often offered jobs in the coal plant so opposition tends to come from those at the bottom of the village hierarchy, such as poor fishermen and small-scale farmers. The Java 7 plant has employed many villagers during its construction phase, but Ginting expects opposition to increase once the plant becomes operational and staff is downsized and pollution increases.

The other hope for a halt to construction is the question of economic value—there is growing evidence that Indonesia does not need all this new coal and that overcapacity could doom the country’s ratepayers to subsidizing the coal plants for generations. A recent blackout also exposed the risk of centralized power and has increased the call for decentralized, renewable alternatives—of which Indonesia has ample potential to produce.

For now, though, Indonesia remains committed to coal. That means more coal smokestacks, barges, and stress on Java’s already burdened coastline and the local communities, sharks, dolphins, and other marine wildlife that depend on it.