The Scott Islands Protected Marine Area, north of Vancouver Island, British Columbia, is a key nesting site for rhinoceros auklets and other species at risk. Photo by Glenn Bartley/BIA/Minden Pictures

Off the northern end of Vancouver Island, British Columbia, lies a constellation of small islets known as the Scott Islands. This remote outpost is where imperiled species come to continue their lines—it’s where 55 percent of the world’s Cassin’s auklets, and seven percent of its rhinoceros auklets, come to breed. It’s also the site of the second-largest breeding aggregation of Steller sea lions in the world, and home to many other species at risk, including other birds and marine mammals, reptiles, and fish. The islands’ importance led Environment and Climate Change Canada (ECCC) to create the Scott Islands Protected Marine Area in 2018, one of a series of marine protected areas (MPAs) that Canada is forming to meet its international commitment to protect biodiversity by setting aside 25 percent of its territorial waters by 2025.

Despite the name, MPAs do not fully set aside an area for nature. Instead, they restrict some activities, such as oil and gas drilling or bottom trawling, that are harmful to wildlife. Now, in a series of reports, the nonprofit organizations World Wildlife Fund-Canada (WWF-Canada), West Coast Environmental Law, and East Coast Environmental Law have identified another damaging activity that they say MPAs should be protecting against: shipping. The reports flag existing laws that could be brought to bear to increase protections.

Ships pose a variety of threats to marine life: they can hit and kill animals, leak oil, dump sewage and other contaminants, introduce invasive species, and cause noise pollution that interferes with many species’ ability to communicate, hunt, and find mates. While big oil spills get a lot of attention, marine ecosystems are more polluted by oil from day-to-day activities than shipping accidents, says Kim Dunn, a marine conservationist for WWF-Canada, highlighting a 2016 study by government agencies and academics about chronic oiling, which poisons seabirds and damages their feathers, reducing their ability to insulate. That study also identified the Scott Islands as an area at particularly high risk because of the presence of a major shipping path nearby, traversed by cargo and cruise ships, oil tankers, and towing vessels.

The best way to protect an MPA from shipping harms is with the unique charter that creates it, says Stephanie Hewson, a staff lawyer with West Coast Environmental Law. When it is created, “each MPA has a blanket prohibition on anything that would damage or destroy marine organisms and their habitat.” Theoretically, that includes shipping. But in reality, Hewson says, for most MPAs, that blanket coverage is followed by a list of exceptions. 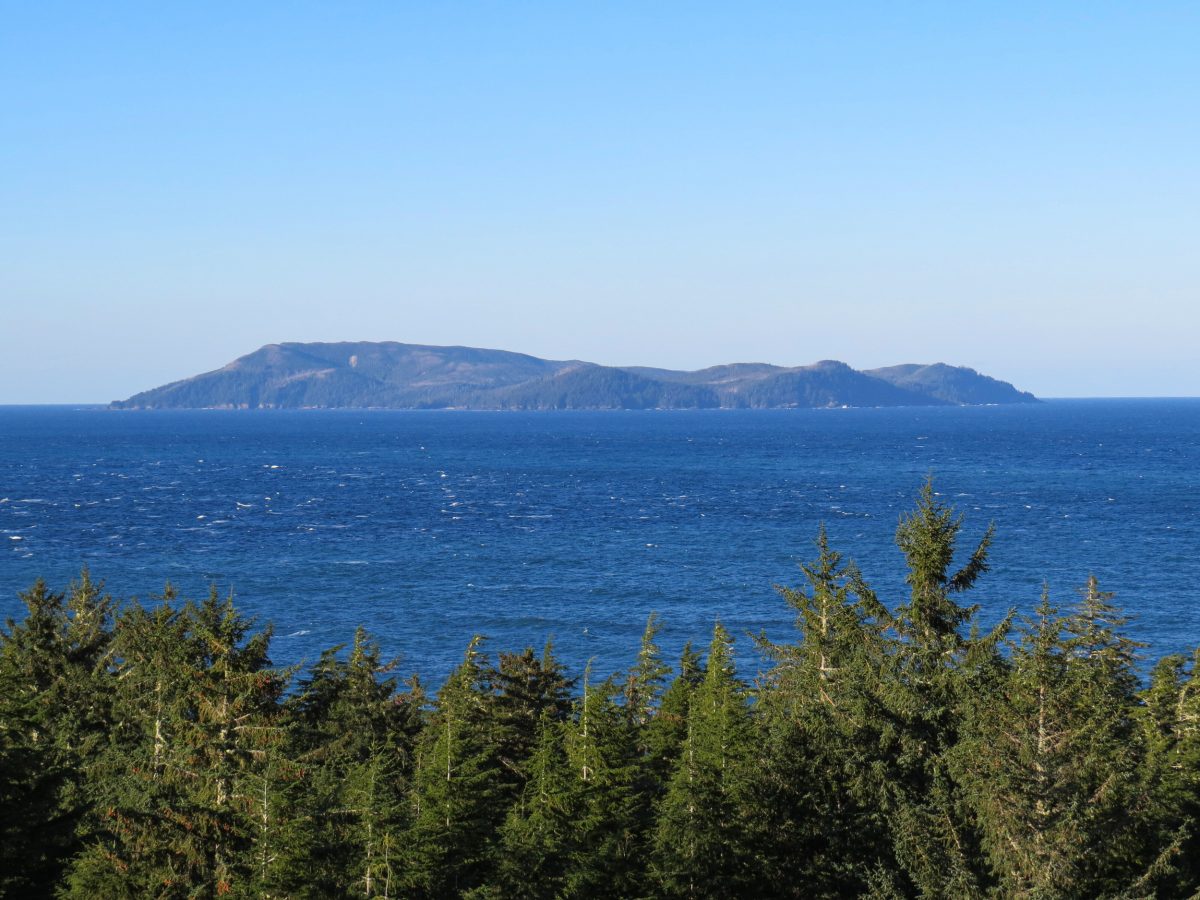 The charter outlining the Scott Islands Protected Marine Area in British Columbia restricts some shipping activity, but advocates suggest it ought to be curtailed even more. Photo by Keith Holmes

The charter dictating the existence of the Scott Islands MPA does have some limitations on shipping activity: it prohibits ships from passing within 300 meters of Triangle, Sartine, and Beresford Islands—key nesting sites—or anchoring within one nautical mile (1.8 kilometers) of their low-tide marks, a length “based on the swim distance of a rat,” says Erika Lok, the protected area coordinator for Scott Islands with the federal Canadian Wildlife Service. Scientists are gathering evidence that noise and light from ships disrupt nesting seabirds’ ability to procreate. When and if that is demonstrated more conclusively, ECCC can upgrade protections under the Scott Islands’ adaptive management plan, Lok says. The existing charter also prohibits dumping and discharging any material that is likely to harm wildlife or degrade habitat.

But the charter, typical of most that create MPAs in Canada, does not further restrict shipping, instead it defers to the Canada Shipping Act of 2001, overseen by Transport Canada. Although the Canada Shipping Act contains provisions for protecting the environment, Michelle Sanders, director of clean water policy for Transport Canada, says that her agency generally follows the recommendations set out by the agencies that create MPAs. In the case of the Scott Islands MPA, the ECCC deemed that “navigation activities … are managed sufficiently under the Canada Shipping Act,” says Sanders, and therefore didn’t require additional restrictions.

Noise pollution is a case in point. The Canada Shipping Act grants Transport Canada the authority to restrict or put conditions on routes to protect certain species and to impose speed restrictions to quiet engine noise, says Hewson. And it’s wielding that authority, Sanders points out. In some shipping routes around Vancouver Island, Transport Canada already requires ships to maintain 400 meters distance from killer whales during summer. But for the most part, she puts the onus for noise protection and other shipping impacts that might imperil conservation goals back on the agencies managing MPAs. “If noise is identified as a critical issue … then we will work with our departments to identify what measures can be implemented,” says Sanders.

The requirements that Transport Canada has for ships navigating in an MPA are typically no different from those applied outside an MPA, says Dunn. She thinks that should change. “The point in protecting something is to make sure it has higher standards of protection … because we’ve said that area is special,” she says.

Passing meaningful restrictions on human activities in MPAs has been an evolution for Canada—one that is still in progress. After public outcry at the federal government for allowing oil and gas drilling in the Laurentian Channel MPA in Newfoundland and Labrador, the government committed to a set of minimum standards for MPAs that would prohibit oil and gas development, mining, bottom trawling, and dumping. The federal government made an international commitment to these minimum standards in April 2019, but agencies are still working out the specifics, says Sanders. Leaking oil “is part of the scope of what’s being looked at” in discussions around minimum standards for MPAs, she adds.

Meanwhile, the reports’ authors say that government agencies could do more with their existing powers to restrict the damage ships can cause to wildlife. “Transport Canada could still address discharge of dangerous pollutants, disposals at sea, air emissions, sewage, gray water, ballast,” says Hewson. “But we haven’t seen a lot of action.”