The residents of Newtok, Alaska, largely relocated to nearby Mertarvik after the village site became too degraded because of climate change. Photo by Andrew Burton/Getty Images

Newtok, Alaska, is sinking. The river on which the village was built is eroding its banks, while the ground beneath it is liquifying. Melting permafrost, the rising sea, and storm surges have rendered Newtok—along with dozens of other Alaska Native communities in northern and western Alaska—unlivable. In 2019, after decades of planning and millions of dollars spent, most of Newtok’s inhabitants relocated several kilometers away.

As climate change continues to destroy the habitability of coastal communities, the question of who should pay for adaptation and relocation efforts remains thorny.

In Newtok’s case, unsalvageable homes were bought out by the US Federal Emergency Management Agency (FEMA). And last year, the US government announced it would fund relocation efforts for six other Alaska Native communities threatened by erosion and flooding. But many others are left in limbo.

Sasha Kahn, a law student at Duke University in North Carolina, however, argues there could be another way Alaska communities, and potentially others, could secure funding.

Writing in the Alaska Law Review, Kahn argues that Alaska communities could potentially secure compensation by framing the problem as a “regulatory taking.” In a regulatory takings case, a landowner needs to argue that government actions have limited the use of their private property to such an extent that they have effectively been deprived of all economically reasonable use or value of their property. Under both the Fifth Amendment to the US Constitution and Alaska law, such takings are eligible for compensation.

Though the approach is typically used to challenge perceived regulatory overreach by the state, Kahn thinks the regulatory takings argument could be co-opted to help communities whose lives and livelihoods are being destroyed by climate change.

To win such a case, says Kahn, a landowner affected by melting permafrost or other serious impacts of climate change would have to convince a court that their property had been affected—and that the state was responsible.

Proving the first part, says Kahn, should be relatively easy. Individual home and business owners could easily demonstrate “significant and severe” economic impacts on the places they live and work due to permafrost melt and subsequent erosion. 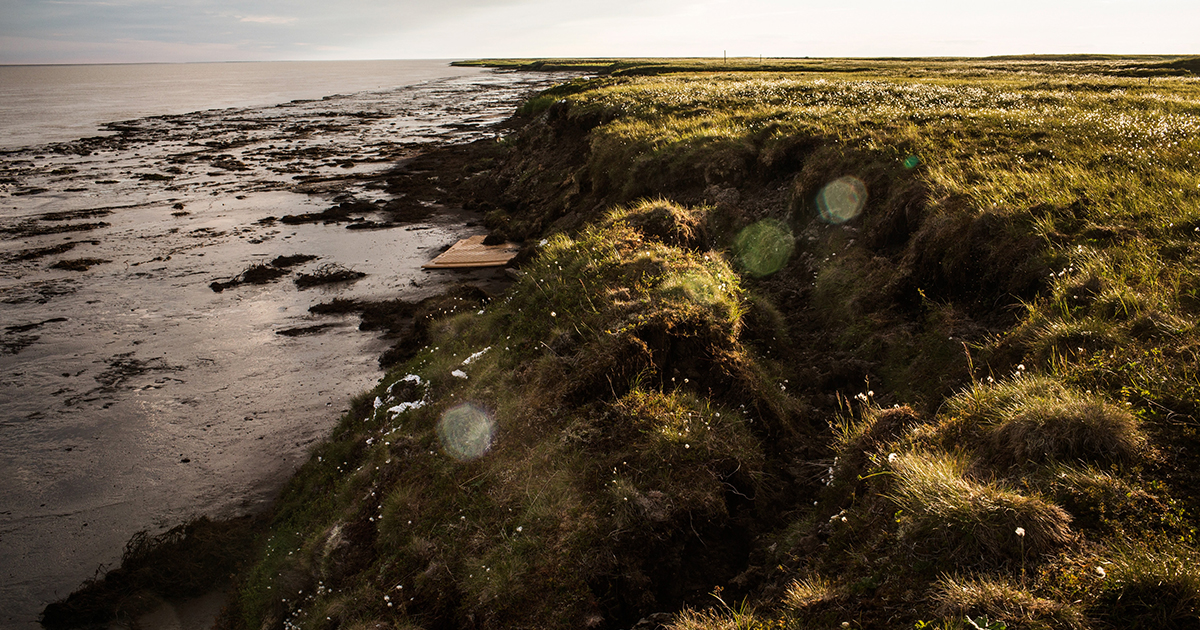 The Ninglick River is eroding its banks near Newtok, Alaska. This along with other climate-related changes caused people to relocate out of the village. Photo by Andrew Burton/Getty Images

They could also show a loss on their investments. “Many of these villages have existed for decades and some families have lived in the area for thousands of years,” he writes. “By settling there … building houses, and investing in their communities, Alaska Native residents created an obviously reasonable and investment-backed expectation that they would continue to be able to live on the land.”

Such an approach might also bypass problems faced by earlier lawsuits. An attempt in 2008 by the Alaska Native village of Kivalina to sue ExxonMobil and other fossil fuel companies for the damage it had already felt from climate change was dismissed on the grounds that regulating greenhouse gas emissions is a political, rather than a legal, issue.

Randall Abate, an environmental law expert at George Washington University in Washington, DC, says courts might be more open to regulatory takings arguments because they revolve around property rights, which are “sacred in the US,” rather than human or constitutional rights.

Proving that the state is responsible, however, is the tricky part. Even here, though, Kahn says it should be possible.

In a regulatory takings suit, the court would have to consider the state’s role in supporting and encouraging the fossil fuel industry and its consequent contributions to global carbon emissions.

A potential lawsuit would undoubtedly draw on Alaska’s century-long history of oil drilling, the creation of a permanent state fund in 1976 to hold and invest revenue generated from its oil resources, and the fact that invested money from oil and gas leases is now the state’s biggest source of revenue.

Kahn admits it would be difficult to contest the legitimacy of Alaska’s investment in oil. But, he argues, that has to be weighed against how harmful the consequences were. And in coastal Alaska, these damages are about as severe as they could be.

The real problem with pursuing a regulatory takings lawsuit, Kahn believes, would be in drawing a clear link between Alaska’s participation in and promotion of the oil and gas industry and the destruction of the land on which Alaska villages sit.

The sales of oil leases, potentially coupled with long-term state investment in oil, has contributed just over one percent of the extra global carbon dioxide emissions added to the atmosphere since 1973, according to Kahn’s calculations. A court may not consider that to be significant enough, he says, and it may not accept that the state was to blame.

However, Elizaveta Barrett Ristroph, a lawyer who advises Alaska Native villages, is more skeptical about the concept. “There’s this long history with Native peoples in the United States and elsewhere being used as pawns for research. Being forced to do this and that and having other people make a buck off of them. They’re just tired of it,” Ristroph says.

She says legal action in Kivalina was taken with limited input from the community itself, some of whom were not aware they were part of a lawsuit at all.

In fact, she believes a buyout program, like that in Newtok, is a more promising route to helping threatened people move.

That said, Ristroph does see potential for some sort of future legal action by Alaska Native communities—if they are compensated every step of the way. “And they must be involved and have a big voice in designing how the lawsuit goes and how far it goes,” she says.

Until now, regulatory takings claims have typically been used to push back against government lawmaking. In fact, they’ve been most influential in chilling regulation, says Kahn. However, he sees no reason why they could not be repurposed to benefit the environment. “While I don’t know if this would necessarily work in Alaska right now, I think this has the potential to work in other places for other purposes relating to environmental destruction.”

Even if they do not succeed, the filing or threat of a climate lawsuit can add to political pressure to act. Abate credits the climate litigation movement with contributing to recent US legislative successes such as the Inflation Reduction Act. “It’s a valuable time to make these kinds of creative arguments because we might just have the political will from the pressure from all these lawsuits to think of oil as a danger.”