In 2011, a New Jersey court awarded US $375,000 to Harvey and Phyllis Karan, who lived in the Long Beach Island, New Jersey, community of Harvey Cedars in a house that once had a lovely view of the sea. That was before the Army Corps of Engineers built a 6.7-meter dune in front of their home to protect it from future storms. But the construction replaced the couple’s ocean panorama with a pile of sand and, they claimed, left them with a house that had suddenly lost its value.

The Karans eventually lost their winnings in an appeal, but their case demonstrates just how intricately the worth of a coastal home is entwined with the beach near which it sits.

In 1972, Congress passed the Coastal Zone Management Act to open up federal funds to both preserve and develop the nation’s coasts. Since that agreement, the US government has spent millions of dollars to keep East Coast beaches in shape, carting in sand to rebuild and replenish beaches that are naturally wearing away from erosion. It’s a process known as beach nourishment, and between 1995 and 2002, the federal government spent $787-million on the program, according to Dylan McNamara, an oceanographer at the University of North Carolina Wilmington. 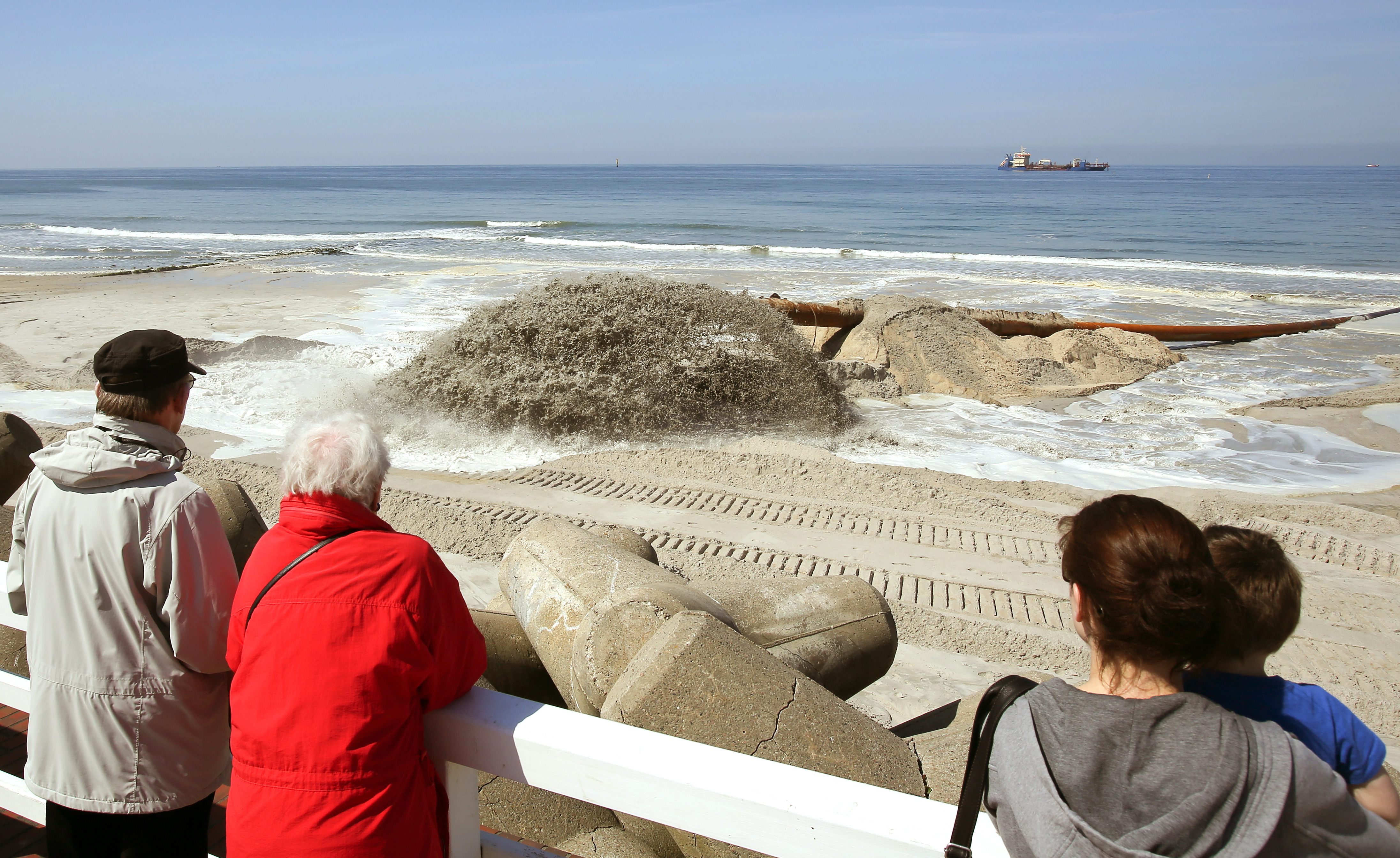 The United States is not the only country that practices beach nourishment. Here, spectators watch as sand is pumped onto the beach on Sylt in Germany. Photo by Bodo Marks/dpa/Corbis

Federal subsidies generally account for about two-thirds of the total bill for beach nourishment projects near private land, according to the National Oceanic and Atmospheric Administration, with a combination of state, local, and private money funding the rest. That means homeowners have reaped roughly 100 percent of the benefit while paying, at most, a third of the cost. It’s kept the value of homes and land artificially high, McNamara says.

And the prices are high—on Long Beach Island, land is so sought-after that it’s worth an astonishing $5-million per acre on average. But in an era of rising seas and tightening budgets, the subsidies may disappear, and home values are likely to wither along with them as homeowners are forced to pay the full cost of maintaining the beach.

Property values are also dependent on the width of the beach, McNamara says: “If you have some space you can put your towel on, that’s a good thing.” And if local and state governments can’t, or won’t, fund the full cost of keeping erosion at bay, the beach that makes the homes so desirable will slowly wash away.

“Say tomorrow [the government] said, ‘We’re not going to pay that subsidy any longer, and it’s going to be you who lives in the houses that has to pay for the beach nourishment costs,’” says McNamara. “As soon as they do that, the actual worth of the home drops.” 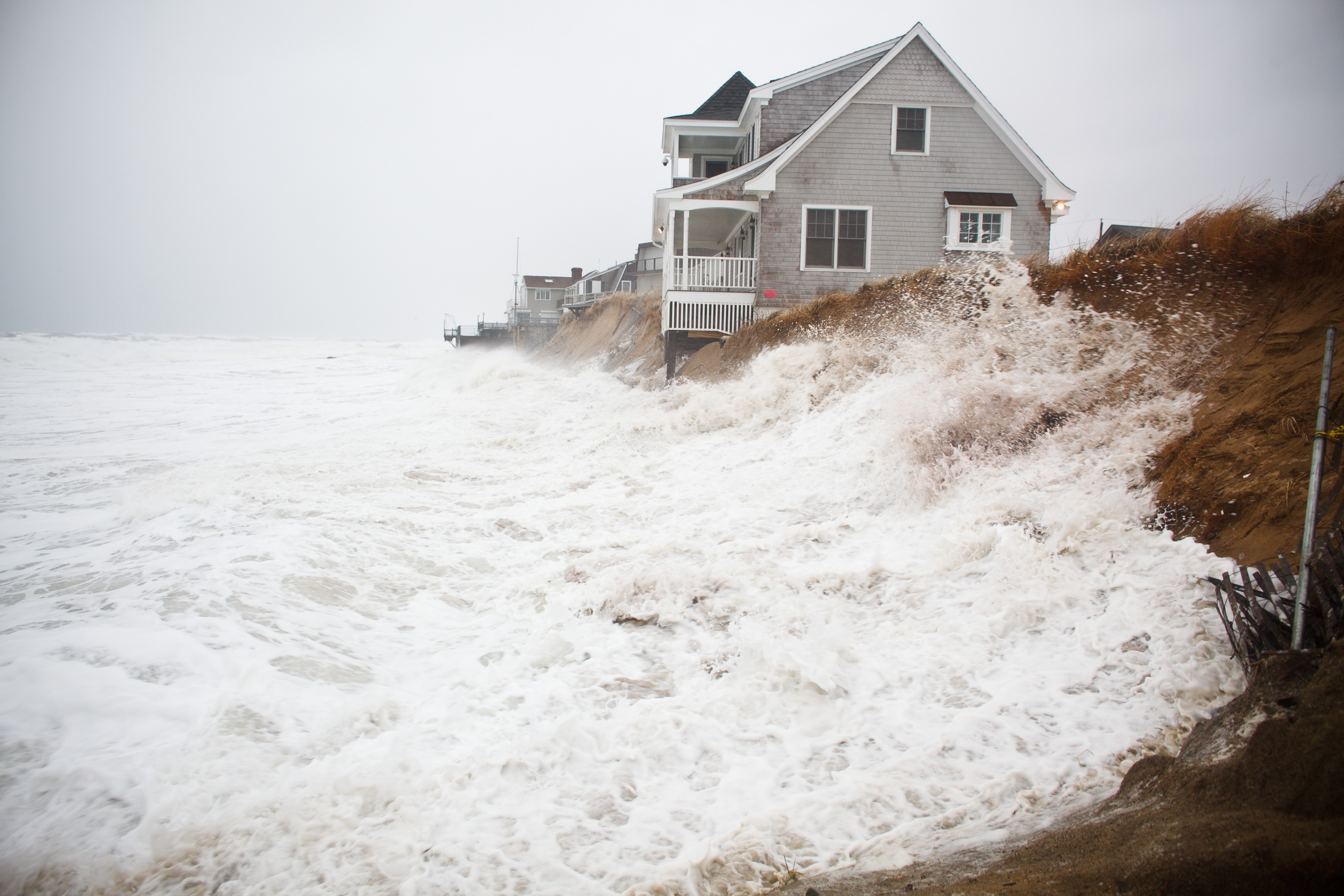 A beach-side house threatens to collapse as strong storm-driven erosion eats away at the beach on Plum Island, Maine, in January 2013. Photo by Porter Gifford/Corbis

The subsidies have been under scrutiny since the 1990s, when then President Bill Clinton unsuccessfully attempted to phase them out. President George W. Bush tried to do the same. The subsidies nearly disappeared for good in 2013, but the Senate defeated an amendment to cut them by a vote of just 53 percent. Pressure from local communities and coastal states fearful of losing their beaches, their tourists, and their economies have kept them in place. “Many beach towns argue they are too poor or too small to pay several million dollars for an effective project,” author John H. Tibbetts wrote in 2003. “Besides, they support tourism, a cash cow for county, state, and federal budgets.”

If the government does decide to cancel its beach nourishment programs, coastal beach towns on the East Coast stand to see their property values drop by about 30 percent says McNamara, who mathematically modeled the role that beach nourishment programs play in sustaining inflated coastal housing prices. In some areas he predicts that housing values could drop by as much as 60 percent.

Such a sudden disappearance of the nourishment programs could create a crash in the market. A better alternative might be to phase out the subsidies over time, giving the market a chance to adjust, says Sam Khater, the deputy chief economist at CoreLogic, a company that analyzes financial and property data. A slow decline in beach nourishment subsidies would give developers time to adjust to the drop in demand for new homes that’s likely to occur when homes are worth less. It’s a problem, he says, that the government is well aware of.

“Most likely if it was done, it would be some kind of grandfathering in,” Khater says. “[The government] knows there would be a fairly large disruption to the market if there was just a line drawn in the sand and it was done.”

The time to make a decision, however, may be fast approaching. As sea levels rise, so too does the effort and cost of keeping beaches from washing away. In North Carolina, sea levels are expected to rise by a third of a meter by the middle of the century, though it may vary by location. Other parts of the East Coast, like New Jersey and New York City, are expected to be hit harder, says Klaus Jacob, a climate scientist with the Lamont-Doherty Earth Observatory at Columbia University.

“You can nourish beaches, but you can’t keep up when you look at sort of beyond the year 2050,” Jacob says. “You just may not be able to keep up with sea level rise by then, if the forecasts come true.”