These two seagrass fairy circles, each about five meters wide, are located in the harbor off Old Grimsby, in the Isles of Scilly in England. Photo by Richard Warwick

In certain areas of Namibia and Australia, stretches of dry grassland are punctuated by regular, symmetrical circles of earth, as if holes have been punched out of the scrubby vegetation. These so-called fairy circles have captured the popular imagination, gaining coverage in mainstream outlets and begetting a host of potential explanations. Though less well known, similar structures discovered in seagrass beds have aroused the curiosity of scientists as well.

Debate surrounding the origin of marine fairy circles is just as intense, if not as well publicized, as that of their terrestrial counterparts. Most recently, a scientific paper documents, and tries to explain, the occurrence of fairy circles in the water off the Isles of Scilly in England.

The English example adds to similar patterns found in the Mediterranean Sea and off the coasts of Denmark and North Carolina. Across this vast geographic range, several seagrass species are involved: Posidonia oceanica, Halodule wrightii, and Zostera marina. While seagrasses, with their long bladelike leaves, appear superficially similar to the terrestrial grasses found in prairie and savanna ecosystems, they are not closely related.

Seagrasses typically reproduce asexually by the extension of horizontal stems called rhizomes through the sediment. New leaves pop up from nodes spaced along each rhizome. When the rhizomes separate because of a cell dying, individual but genetically identical plants are formed. But seagrasses can also reproduce sexually, producing seeds that allow them to colonize new areas.

Both types are present in the Z. marina beds off the Isles of Scilly. Circular holes are prevalent in the P. oceanica beds in the Mediterranean. The formations off the coast of Denmark are random rings of Z. marina. And those off North Carolina occur in a leopard-skin pattern—rings of H. wrightii and Z. marina scattered across the seafloor. 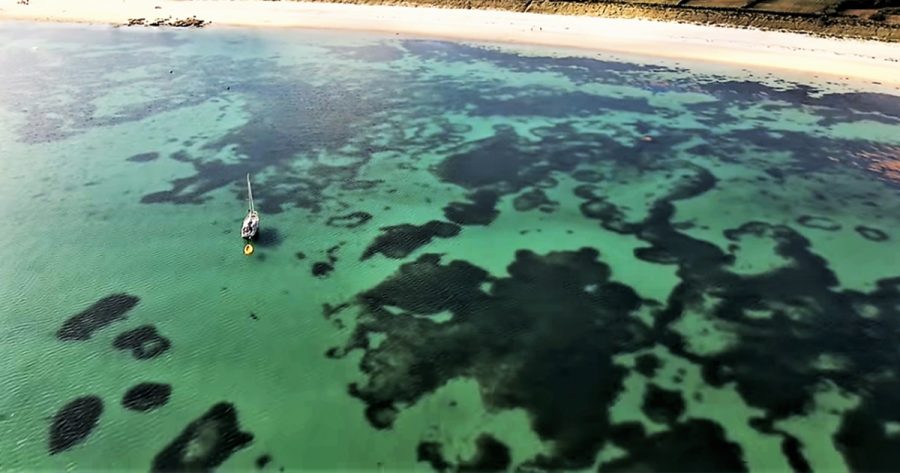 Seagrass fairy circles found in the water off the Isles of Scilly in England. Photo by Dominic Heydon

Over the past several decades, researchers have come up with a variety of explanations for their existence: everything from the presence of ancient human settlements to bomb craters to more mundane explanations like nutrient depletion. Another proposed explanation says they result from the accumulation of hydrogen sulfide generated by decaying organic matter in the middle of the rings. In this hypothesis, the hydrogen sulfide causes the older seagrass to die, leaving only the youngest members of the clonally expanding colonies on the outside of the ring.

Richard Warwick, a marine ecologist at the Plymouth Marine Laboratory in England, and the author of the most recent paper describing the fairy circles off the Isles of Scilly, proposes two other explanations for the circular formations he observed. One is remarkably mundane: the circles in existing seagrass beds are formed, he says, by boat moorings scouring the surrounding seafloor of plant life. He thinks the isolated circles of Z. marina likely formed when seedlings expanded clonally from where they initially germinated and then slowly died out in the center.

That explanation is reminiscent of the hydrogen sulfide hypothesis, but Warwick considers hydrogen sulfide an unlikely cause—at least for his study site. “The sediments around the Isles of Scilly are quite coarse,” he explains. “You don’t get any buildup of organic matter in them, so you’re not likely to get sulfide poisoning. The [seagrasses] just die of old age.”

While both types of seagrass formations have been referred to as fairy circles, and it’s easy to draw parallels to their terrestrial counterparts, Stephan Getzin, an expert in ecological modeling at the Helmholtz Centre for Environmental Research in Germany, disputes this characterization. Getzin, who has spent two decades studying the terrestrial fairy circles in Namibia and Australia, thinks the seagrass formations ought to be referred to as plant gaps or rings. Fairy circles, in his view, are distinct.

Terrestrial “fairy circles are gap patterns,” he says. “You have a full matrix of vegetation and then you have the circles within the matrix.”

Namibian and Australian fairy circles occur at regular intervals, he adds, while seagrass gaps are irregular. That regularity, he says, is because the limiting factor that causes grassland fairy circles—the availability of rainfall, he thinks—is always the same across hundreds of meters.

Grassland fairy circles, says Getzin, are a dramatic example of self-organization by a plant species. The plants grow in repeating patterns that allow them to best make use of extremely limited water in arid environments. The circles in seagrass beds, conversely, are irregularly spaced and are attributable to an array of causes, he argues.

Fairy circles differ from the ring formations found in seagrass beds and in some terrestrial landscapes as well. “Plant rings are actually not spatially ordered either,” claims Getzin. “They appear as random patterns. They are often clustered in certain corners of the landscape.”

The obscure definitional disagreements are somewhat of a side note, though—seagrass beds are of massive ecological importance. They serve as carbon sinks, help stabilize sediments, and provide habitat for marine organisms. If an academic debate about a few unexplained patterns in their undulating expanses provides an entry point into the more crucial mystery of their role in the greater marine ecosystem, so much the better.