Mustang Survival is now making hospital gowns out of a breathable, waterproof material. But their ambitions extend beyond the simple gown. Photo by Mustang Survival

A call for help told Josh Horoshok he had to do something. It came from a friend—an emergency room doctor—in the early days of the COVID-19 crisis.

“He was scared,” Horoshok remembers. “He wanted me to make him a mask and goggles, because he didn’t think the stuff he was using was keeping him safe. I thought, my God, we’ve got to help the people on the front line.”

More than most, Horoshok has the power to respond. He manages a team of designers at Mustang Survival, a company that makes survival equipment—everything from life jackets to military biohazard suits.

Like many other British Columbia–based companies, including Arc’teryx, Boardroom Clothing, and KenDor Textiles, Mustang Survival took the emergency as a call to pivot. From their usual niches, these brands have switched to helping fill immediate gaps in the medical equipment supply chain. In early April, Mustang delivered its first batch of medical gowns to Vancouver Coastal Health.

But Mustang Survival is also looking beyond the present pandemic, Horoshok says. He and his team think their expertise could help doctors and nurses be better prepared, safer, and more comfortable for the next pandemic. Or the next wave of this one.

“We quickly realized these guys don’t have the best stuff,” Horoshok says. “Everything seems so stale, like there’s been no innovation in the medical field. We come from the outdoor gear world, which is so highly competitive. We’re constantly evolving and chasing the game, always asking how do we improve the experience for the user. No one seemed to be doing that for doctors and nurses.”

That may be because, normally, personal protective equipment such as gowns, masks, and face shields, are only used for short periods. To prevent the spread of infection, they’re thrown away after each patient. But with a global shortage of personal protective equipment, hospitals are rationing. Doctors and nurses are using the same gowns and masks for entire shifts. Horoshok heard complaints about sweaty and uncomfortable gowns, masks that chafe and pinch, and concerns that face shields don’t seal completely. Fully enclosed biohazard suits are an alternative, but they’re even more uncomfortable and tend to fog up.

“We decided to focus on face shields,” Horoshok says. “How do you completely seal the oral, nasal, and ocular cavities and keep it comfortable?”

This wasn’t an entirely new problem for his team. Some of Mustang Survival’s personal flotation devices use inflation tubes, and their drysuits rely on one-way valves and watertight construction. But the most applicable inspiration came from a US Navy contract to design a submarine escape suit that was fully enclosed and pressurized.

With those ideas in mind, Horoshok let his team loose. “They went completely crazy,” he says. They developed a full-face mask with gill-like air intakes and filters, a drysuit hood with one-way exhaust, and, drawing on the scuba world, experimented with masks and snorkels equipped with air filters.

Horoshok also thinks there’s plenty of room for improvement with the gowns. “Some of the stuff they’re using is just crap,” he says. “I think the outdoor world would have a lot to offer in terms of protection and comfort.” For instance, Gore-Tex is commonly used in waterproof and breathable sailing and paddling drysuits and jackets. It would be a more comfortable gown material, Horoshok says. The added cost of the material could be offset by durability, he adds. “Maybe it could be washed and reused multiple times.” 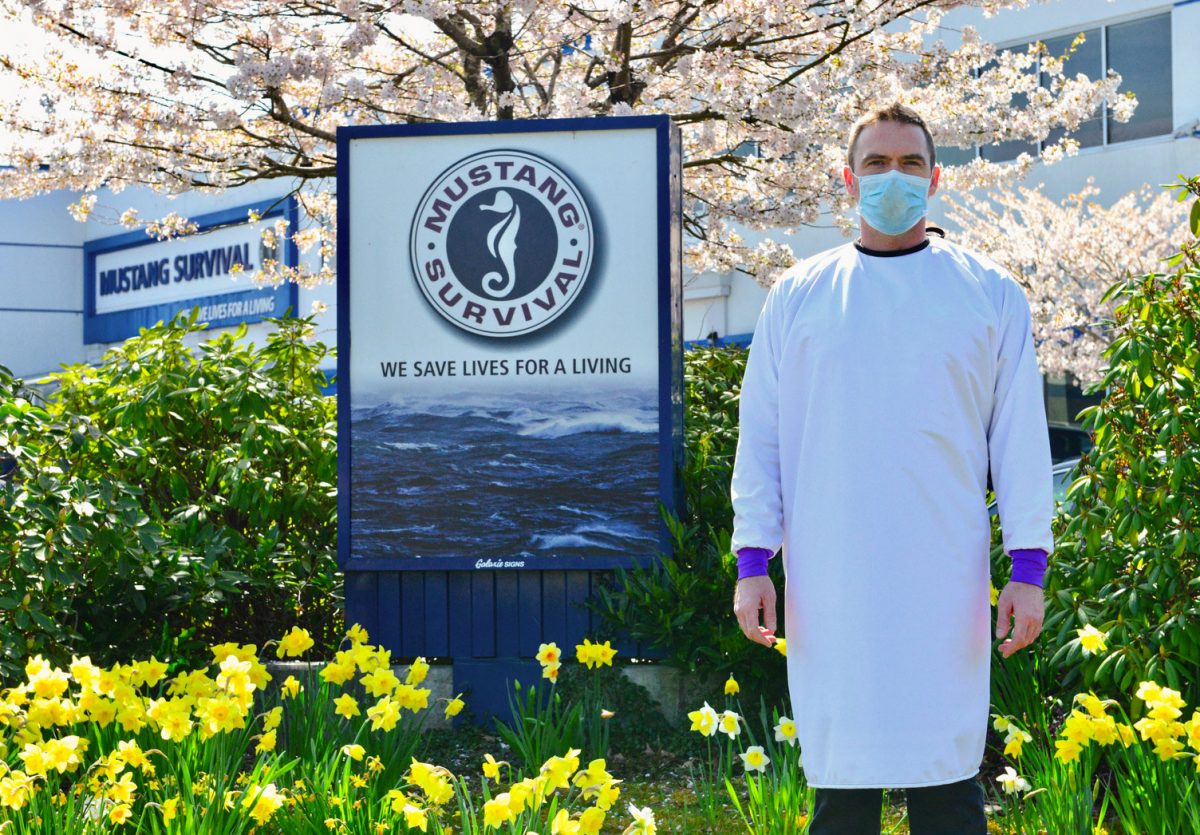 Other companies are applying their own specialties to the effort. For instance, Texavie, a Vancouver-based company that has mostly focused on developing gloves for interactive and virtual reality, is switching to building a medical glove—one that’s tactile, comfortable, and resists the virus with water-resistant and anti-viral materials, says Peyman Servati, the company’s founder.

Servati is also looking to improve on the fit and function of masks for medical applications, and, even more so, for consumers.

“Medical personnel are trained to use protective equipment,” Servati says. “The general public is not.” Poor fit and misuse vastly degrades the performance and usefulness of a mask, he says. Right now, the company is working on using advanced textiles to create a better, more comfortable fit, and nanofiber filters that are easier to breathe through and offer improved protection over existing medical N95 masks. In the future, he says, masks will work passively and actively. Smart materials and sensors will tell users when they have a good fit, and warn when the mask is contaminated.

Non-medical companies like Texavie bring fresh eyes and new ideas to the problem, says Nancy Paris, the director of MAKE+, a design and innovation lab at the British Columbia Institute of Technology (BCIT) that has helped bring medical devices to market in the past. However, they also face the challenge of working in a highly regulated field.

Before Health Canada approves a product for medical use it must pass through a complicated process of standardized tests governed by the International Organization for Standardization (ISO). Take, for example, the ventilators that are essential for treating serious cases of COVID-19 but are in short supply. Many companies are rushing to fill the void with new products, but one of the key ISO tests requires a breathing simulator, a rare piece of equipment. BCIT Health Sciences has two of the CAN $40,000 devices and is partnering with MAKE+ to help companies test their devices and submit data to Health Canada.

“Early on we knew that ISO standards and testing was where the bottleneck was going to be,” Paris says. “It’s where our expertise is most needed.”

Health Canada is fast-tracking COVID-19-related product approvals. Still, new products will take several months or longer to go through the process. They may not arrive on the front line in time to help fight this pandemic, Paris says. But she’s hopeful some of these companies will see enough success to stick with the medical industry.

“It’s a good business to be in,” says the 30-year industry veteran. “It’s not as susceptible to downturns as a lot of other industries. There’s always a need for medical equipment.”

And even if companies like Mustang Survival and Texavie do return to their niches when the crisis is over, she sees their interest now as beneficial down the road.

“If another crisis hits, they have the capability to retool and respond faster,” she says. “We won’t be as dependent on the rest of the world for the products that we need.”

The next crisis is on Horoshok’s mind, too. “Even after this pandemic passes, Mustang will continue to look at ways we can drive innovation,” he says. “We feel a responsibility to keep at it.”