The story of the European settlement of North America usually features a few main characters: red-headed Norsemen who sailed across an icy sea to set up temporary outposts, Spanish conquistadors, white-collared English separatists, French trappers, and Dutch colonists. Now a team of Greek scholars proposes another—and much earlier—wave of European migration: the Hellenistic Greeks, in triremes powered by sail and oar in the first century CE, nearly a millennium before the Vikings.

These ancient Greeks regularly visited what is now Newfoundland, the study’s authors say. They set up colonies that lasted centuries, and they mined gold. They made recurrent trips every 30 years. Some travelers would return home after only a brief stay, but for others the voyages were one way—they came to know the North Atlantic, not the warm Aegean, as their home waters.

To be clear, there is no firm evidence of the ancient Greeks’ purported voyages. There are no known physical remains of these historic Greek settlements in North America, nor are there first-hand descriptions of such journeys in anything but one account from antiquity. The idea is based entirely on a new examination of a dialogue written by the influential Roman author Plutarch, who lived from 46 to 119 CE.

“Our intention is to prove, with modern science, that it was possible for this trip to be made,” Ioannis Liritzis, an archaeologist at the University of the Aegean who proposed that the ancient journeys took place, wrote in an email. Liritzis presents his argument in a new paper, co-authored with astronomer Panagiota Preka-Papadema, philosopher Konstantinos Kalachanis, meteorologist Chris G. Tzanis, and information technology consultant Panagiotis Antonopoulos.

Greek historians and maritime archaeologists are wary, however. Several people contacted for this story say Liritzis’s claims are unfounded, and unlikely at best.

To understand why Liritzis and his colleagues believe ancient Greeks may have reached Canada, it’s helpful to understand a bit about their source. Plutarch was a Greek historian and Roman citizen who died around 120 CE. He was a prolific writer and biographer. In On the Face Which Appears in the Orb of the Moon, often called simply De Facie, several characters discuss whether the moon is another Earth, whether it has life, and other philosophical questions. In one section, a character recounts meeting a stranger who had recently returned from a long voyage to a distant “great continent.” According to the stranger, new travelers would make the trip roughly every 30 years, when the planet Saturn appeared in the constellation Taurus. Some travelers stayed behind on the continent and some would have returned, Liritzis explains.

Based on a close reading of Plutarch’s text, Liritzis and his colleagues claim that this great continent is in fact North America. In the paper, the team argue that the Greeks could have used their detailed knowledge of astronomy to pinpoint the locations of Atlantic currents that could have borne them west.

Indeed, the bulk of their argument is based on astronomy, and it all starts with a total eclipse of the sun.

The opening chapters of De Facie have been lost to history, so no one knows the exact date of the conversation it describes. But one clue contained in the story is a reference to a total solar eclipse that happened sometime around noon. Liritzis and the others searched five millennia of eclipse records to find one that met the necessary parameters, including the time of day, and the time at which Plutarch would have been writing. (There was a total solar eclipse in 59 CE, for instance, but Plutarch would have been just 14 years old.) Ultimately, the researchers settled on one eclipse, which took place in 75 CE. Using astronomy software, the researchers saw that in the decades surrounding this eclipse, Saturn would have appeared in Taurus during three periods: from 26 to 29 CE, 56 to 58 CE, and 85 to 88 CE. 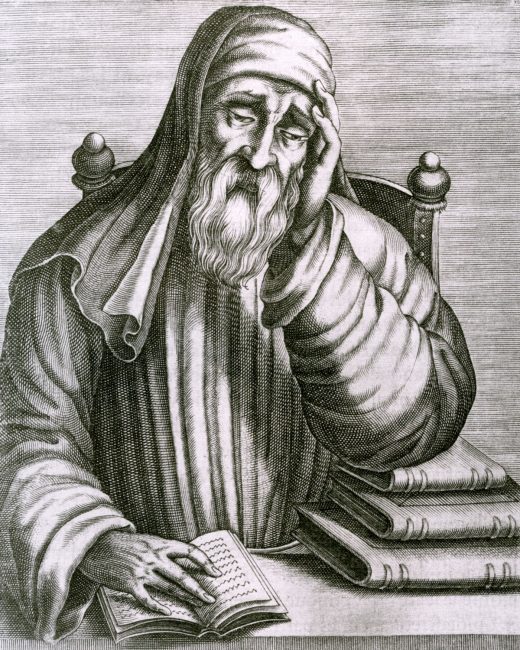 Plutarch is a well-respected biographer and writer. Archaeologist Ioannis Liritzis and his colleagues dug into records of past astronomical events to see when the great voyage described in Plutarch’s De Facie may have taken place. Photo by Pictorial Press Ltd/Alamy Stock Photo

The 75 CE eclipse was used to calculate the timing of the conversation between Plutarch’s informant and the stranger who’d traveled to the great continent. Based on this, Liritzis and his colleagues timed the trip itself to the period when Saturn was most recently in Taurus—56 CE. The researchers posit that preparations for the journey described by Plutarch’s stranger would have commenced that year. The travelers would have arrived in North America in 57 CE, stayed for a year amid an existing Greek colony, and sailed home in the fall of 58, when Saturn moved out of Taurus. This was merely the most recent voyage to the time of Plutarch’s writing; according to the text, such journeys took place every 30 years over a span of several centuries.

The researchers’ close reading of De Facie leans on geography as well. In the text, Plutarch includes heading and distance estimates for the stranger’s trip, which Liritzis and his colleagues included in their calculations. For instance, Plutarch wrote that the “great continent” lies beyond the isle of Ogygia, which, according to the text, is itself a five-day trip by trireme west from Britain. Plutarch also wrote that the Greek settlers accessed the “great continent” through a bay that lines up with the Volga River delta, the northern entrance to the Caspian Sea. Using Google Earth, Liritzis drew a line from this location across the Atlantic, and found it led to the Gulf of Saint Lawrence. Liritzis rejects counterproposals that the putative great continent could have been Ireland, the Azores, or a location nearer to the Strait of Gibraltar, at the mouth of the Mediterranean.

“Plutarch says they are of the same geographical latitude, lying on [the] same parallel. No relation whichever with Azores or [otherwise],” he says.

Liritzis says the Greek settlers may have journeyed for the sake of exploration, for riches, or for religious reasons. He says that they would have made the journey when Saturn was in Taurus because they closely followed astronomical phenomena associated with Kronos, the mythical leader of the Titans and the father of Zeus. (The planet we know as Saturn, renamed by the Romans, was called Kronos by the ancient Greeks.)

Other archaeologists say the occurrence of such a voyage is implausible—though not necessarily impossible.

Hector Williams, a professor of classical archaeology at the University of British Columbia (UBC) who studies underwater archaeology in the eastern Mediterranean, is just one of the many researchers contacted for this story who expressed skepticism at the idea that, over centuries, ancient Greeks sailed back and forth to what is now eastern Canada.

“While accidental pre-Columbian crossings are not impossible for Greeks and (more likely) Romans who were caught in a storm while on the coast of western Europe, there is no evidence for regular crossings,” Williams says in an email. “Even the Vikings gave up their brief settlement in Newfoundland after a few years.”

Brendan Foley, an underwater archaeologist at Lund University in Sweden who studies shipwrecks from antiquity, including the famed Antikythera shipwreck, took issue with most of the paper’s assertions.

“There is simply no possible way that first millennium BCE Mediterranean sailors would have any concept of [Atlantic Ocean] currents, and they certainly did not possess the navigational technologies and knowledge (à la Polynesian sailors) to position themselves in the open Atlantic Ocean to ride them,” Foley writes in an email.

As one example of many, Foley refutes the proposed motivation of the Greek sailors. In their paper, Liritzis and colleagues suggest the Greeks might have sailed to Newfoundland in search of gold; Plutarch says the foreigners who returned from the great continent were carrying supplies inside golden cups. But as Foley points out, the gold mined in that region today is a by product of copper ore production in underground mines. He adds that large surface deposits of gold, of the sort that could be mined using ancient technology, are scarce in that area. Foley says he is unaware of any analysis of Hellenistic artifacts that would show the gold within them can be traced to Newfoundland.

“There is absolutely no evidence for this,” Foley says.

He further points out that the Greeks’ purported sailing speeds of 10 knots, or roughly 18 kilometers per hour, is quite a clip even for modern ships. Liritzis and his co-authors argue the sailors must have reached speeds of 9.7 knots to cover the distances Plutarch specifies, such as the distance between northern Britain and Iceland. Elsewhere in the ocean, the sailors would have typically reached average speeds of three knots, say Liritzis and his colleagues.

Rajmund Krivec, a physicist at the Jožef Stefan Institute in Slovenia who has studied Greek triremes, says the vessels’ speeds can vary greatly owing to various modes of rowing, and much depends on the strength of the crew and the ocean conditions.

“What matters here is probably the long-time sustained upper speed,” he says. In the relatively calm Mediterranean Krivec says that triremes may have reached as much as three or four knots. They would have moved more slowly over the ocean.

In their paper, the researchers propose a route that Greek sailors may have followed to reach North America. Illustration by Mark Garrison

If ancient Greek sailors did make it to Canada, it may have been an accident made while aiming for Britain or Ireland, Krivec says.

The Greek researchers acknowledge in their paper that there is no evidence that the Greek sailors actually made these trips; they only set out to show its plausibility, using interdisciplinary approaches and scientific evidence.

“That ancient Greeks made it to Scandinavia and the New World … is not supported by archaeology yet, but the potentiality of such a hypothesis has been modeled by arguments and the reafﬁrmation of astronomical, geographical, and oceanographical factors,” they write.

Liritzis is not the first to suggest ancient Mediterranean cultures visited the Americas. The British author Gavin Menzies made a similar claim in his controversial book, The Lost Empire of Atlantis. He argues the fabled lost city of Atlantis was part of the Minoan civilization, a Bronze Age society that populated the Greek island of Crete from 2600 BCE to about 1000 BCE. But most classical archaeologists reject Menzies’s ideas, including his claim that Minoan sailors reached the Americas.

Some researchers have also suggested the ancient Phoenicians, a civilization that arose around 1000 BCE in the Levant, near what is now Israel, Syria, and Lebanon, also reached North America. The Greek historian Herodotus, the “father of history,” claimed the Phoenicians circumnavigated Africa in 600 BCE, supporting the idea that they were capable long-distance sailors.

But most historians reject this and other similar claims of pre-Columbian settlement in North America—at least intentional ones—based on a total lack of archaeological evidence.

UBC’s Williams says the new theory put forward by Liritzis and his colleagues reminds him of all the effort that went into trying to make sense of the Atlantis legend.

Ultimately, the scholars’ claim reflects an impulse at least as old as Western civilization itself: not only to explore and seek adventure, but to spin epic yarns about adventurers’ exploits.