Stretching across the remote Northwestern Hawaiian Islands, the Papahānaumokuākea Marine National Monument protects more than 7,000 species—a quarter of them found nowhere else on the planet—in an area of island-dotted ocean spanning more than a million square kilometers. Refuge for this life came in 2006, when US President George W. Bush established the marine protected area (MPA). A decade later, President Barack Obama quadrupled the monument’s size to make it, at the time, the largest protected area in the world.

The expansion was praised by environmentalists and by Native Hawaiians, for whom Papahānaumokuākea holds significant cultural value. But it also drew sharp criticism from the Western Pacific Regional Fishery Management Council, the US Congress-appointed body that manages fisheries in the region—including the economically important longline fishery, which primarily targets bigeye tuna. In April 2016, the council argued in an open letter to Obama that an enlarged MPA would force longline fishers onto the high seas where they would “face increased competition with foreign vessels, lower catch rates, and higher operating costs.”

But according to a new study led by John Lynham, a marine resource economist at the University of Hawai‘i at Mānoa, those negative impacts were overstated. Following the MPA’s expansion, fishers’ catch per unit effort (CPUE)—a proxy for profitability—held steady.

Lynham did not expect that finding. He had been operating under the assumption that 10 percent of the fishery’s catch came from the area encompassed in the Obama-era expansion—a figure put forward by the management council. “But then as I started digging deeper … I realized that this claim of 10 percent was a little bit of an exaggeration,” he says. By combing through observer records and satellite data, Lynham realized that as much as 97 percent of longline fishing had been happening outside of the expansion area before it became protected. 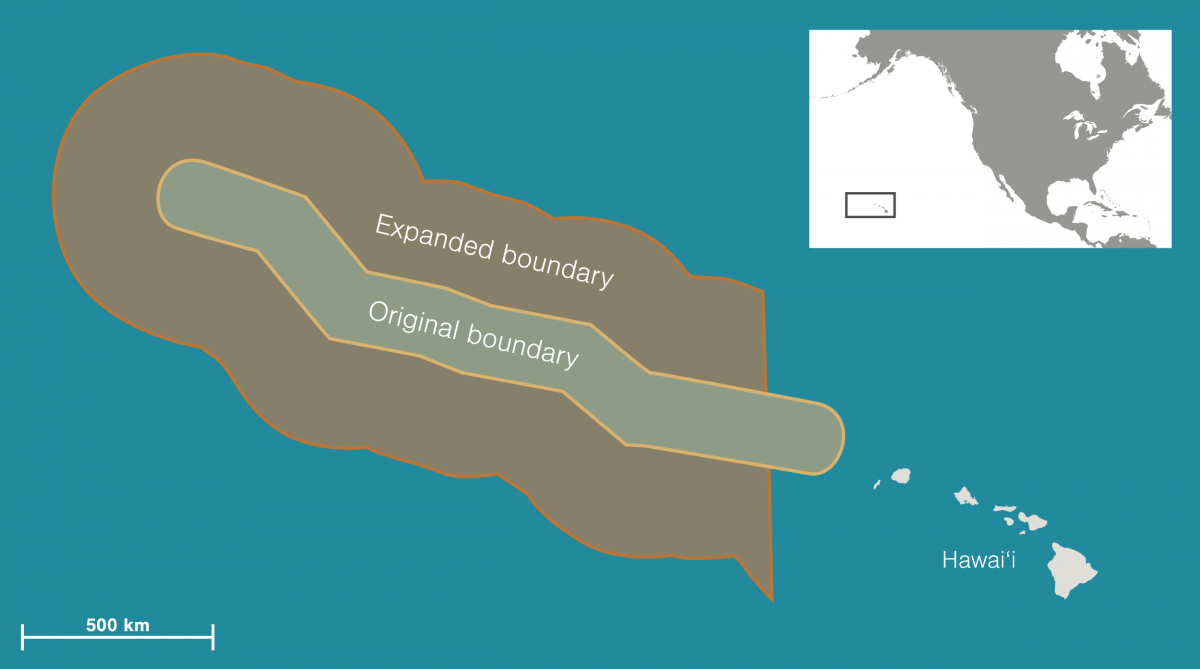 Located in the Northwestern Hawaiian Islands, the Papahānaumokuākea Marine National Monument was established in 2006. In 2016, it was quadrupled in size. Map data via NOAA

Another recent study by Hing Ling Chan, a senior fisheries economic project manager with the University of Hawai‘i’s Joint Institute for Marine and Atmospheric Research who works with the National Oceanic and Atmospheric Administration (NOAA) Pacific Islands Fisheries Science Center, similarly found that even before the expansion was implemented, fishing in the area had already been declining.

For a subset of vessels, however, the area had remained important. Using confidential logbook data that only NOAA had access to, Chan found that the CPUE for more than a quarter of the longline fleet declined by seven percent in the 16 months following the expansion—accounting for revenue losses of US $3.5-million.

Chan chalks this up to an adjustment period; fishers were likely looking for other productive fishing grounds. In the future, she says, the damage to their bottom line will probably go down.

Mark Fitchett, a pelagic fisheries ecosystem scientist with the Western Pacific Regional Fishery Management Council, agrees that fishers may find other areas rich in bigeye tuna, but that takes time and effort. “How much more productive do these grounds need to be to make up for the cost of them having to travel further and for them to be putting their crews further at risk?”

Fitchett says Chan’s paper more accurately captures what happened to the longline fishery post-expansion than Lynham’s study and that it makes sense to home in on the portion of the fleet that most heavily fished in the area surrounding the Bush-era MPA. The management council’s scientific and statistical committee plans to rebut Lynham’s study, he adds.

Given the longline fishery’s annual earnings of roughly $100-million, Fitchett says losing $3.5-million in revenue is significant. “Imagine if you had your salary docked three percent,” he says, and you had fixed costs like rent and food to worry about. Not having that extra income “would have a profound impact on your quality of life.”

For Lynham, the conservation value of what is now the third-largest protected area in the world outweighs such losses. He says the MPA is the size of Alaska, Texas, and California combined, yet “we’re arguing over whether the damage is $3-million or zero.”

Though Lynham plans to formally refute Chan’s paper, he says their findings, taken together, are “helping to paint a clearer and more complete picture of the impacts” to the Hawaiian longline fishery. It’s evidence, he says, that really big MPAs and fisheries can coexist.

Correction: A previous version of this article stated that Hing Ling Chan worked for the National Oceanic and Atmospheric Administration (NOAA). Chan is affiliated with NOAA, but is not directly employed by the organization.