Very little of Peru’s anchoveta catch is used for human consumption. The vast majority is processed into fish meal and other products. Photo by Ernesto Benavides/AFP/Getty Images

On a soccer field 3,000 meters above sea level, Quechua healthcare workers with Sacred Valley Health attach a measuring tape to a goalpost. One by one, toddlers are tempted with stickers to hold still against the tape. It’s market day in Huillac, Peru, and parents have brought their children to receive vitamins and have their growth recorded. In this small rural town in the central Andes, roughly half of the children fall below the global average height as laid out by the World Health Organization’s child growth standards. Here, half of all children are anemic, and the rate of child malnourishment can top 70 percent.

Meanwhile, a few hundred kilometers away, the Peruvian coast is home to the world’s largest single-species fishery, a commercial behemoth that brings in up to 12 million tonnes of fish a year. Here, the Peruvian anchoveta thrives in the cold, nutrient-rich waters of the Humboldt Current. This svelte silver anchovy is one of the world’s most abundant fish, but a measly two percent of the catch is eaten by the locals—the vast majority is turned into fish meal or oil, and shipped to farmers and aquaculturists around the world to feed shrimp, cattle, and other livestock.

Yet in a new study, researchers pulled together economic modeling and public outreach data to answer the question: what if more of the anchoveta harvest was used to feed people?

Feeding locals doesn’t have to come at the expense of the export industry, says Santiago de la Puente, a fisheries economist at the University of British Columbia and coauthor of the study. Processing anchoveta for human consumption still leaves behind plenty of fish byproducts that can be prepared and exported as oil and fish meal. That’s one of the key messages of the paper, he says: this tiny fish could feed the world.

According to University of Maine archaeologist Dan Sandweiss, who was not involved in the study, the anchoveta fed Peruvians for thousands of years. A shift in climate roughly 5,800 years ago brought cool upwelling water to the west coast of South America, and with it, the small schooling fish. Sardines and anchovies were the protein cornerstone of the diet of the late pre-ceramic coastal societies, and facilitated rapid population growth and development throughout the region. “The fish were clearly an important part of the story,” says Sandweiss. All that changed in the 1950s.

When overfishing drove the sardine populations off California to collapse, the Peruvian anchoveta fishery industrialized rapidly, filling the gap in the market. The boats, the international buyers, essentially the whole system, fell right into Peru’s lap.

“Overnight, we went from catching 400 tonnes to six million tonnes of anchovy,” says de la Puente. Those with the means of production owned the seas, and the flourishing anchoveta trade was so lucrative that the smell of fish meal became el olor del dinero—the smell of money. 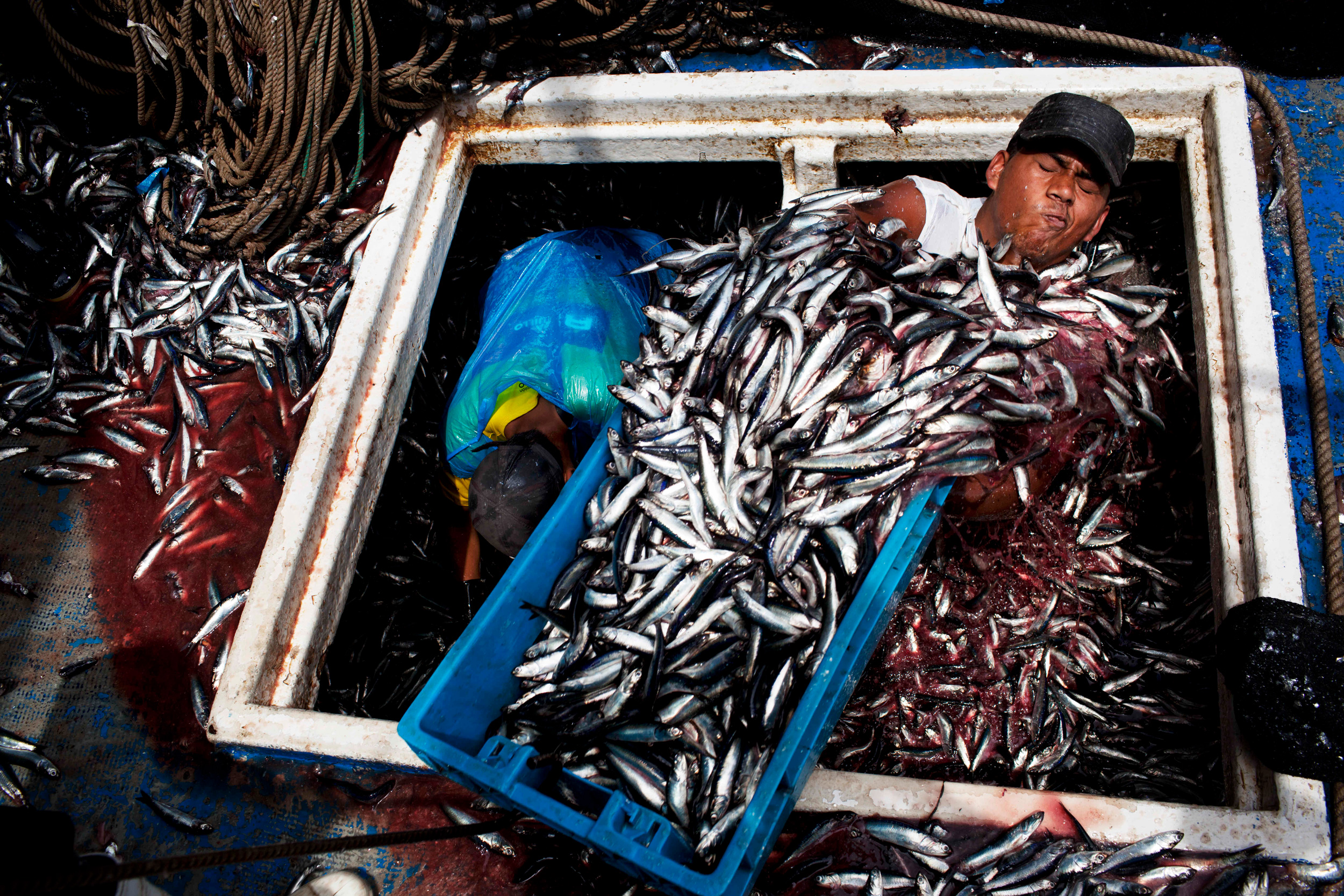 Researchers say that far more anchoveta could be used for human consumption without damaging the export market. Photo by Rodrigo Abd/AP Photo

The exploding industry, however, mostly served a handful of fishing magnates and international buyers. The locals saw few gains, despite living so close to so much fish. The small-scale, subsistence fishery had sustained Peruvians for thousands of years, but rapid industrialization sent the anchoveta around the world instead. At home, the fish fell out of favor. It took only a generation or so for people to start seeing the anchoveta as animal feed or the backbone of government food programs—the poor man’s fish. It will take more than new fishery regulations to make the anchoveta a popular food again; a cultural change is crucial.

In 2006, scientists at Lima’s Cayetano Heredia University launched the first Anchoveta Week in an effort to sway public opinion toward the small fish. Lead researcher and Oceana Peru vice president Patricia Majluf worked with Peru’s foremost chef, Gaston Acurio, to promote the anchoveta as a gourmet ingredient. Acurio is “the King Midas of Peruvian gastronomy,” de la Puente pronounces. “He is a trendsetting monster.”

By featuring anchoveta dishes on his TV show, Aventura Culinaria, Acurio helped change public perceptions of the fish. In a 2006 survey, more than 500 Anchoveta Week participants associated the fish with words like “smelly,” and only 12 percent identified the fish as “food.” Four years later, opinions had changed when a follow-up survey found that over 98 percent regarded the anchoveta as food—with over half identifying it as nutritious, and a third calling it delicious.

“We had thousands of people try anchoveta for the first time,” de la Puente says, “And 90-something percent were saying, ‘I like it, I would feed it to my family.’”

Tim Cashion, a fisheries researcher with the Sea Around Us at the University of British Columbia*, says it’s possible that the Peruvian anchoveta fishery could be redirected to provide food for people, as well as livestock. There are a number of recent examples from around the world where forage fish were reintroduced to the local cuisine, he says, including the Atlantic herring in northern Europe, the capelin in Iceland, and the Pacific herring in British Columbia.

“All of these examples, however, were not made by a centralized decision, but by market forces,” Cashion says. In other words, the anchoveta needs to be processed and marketed in a way that people will want to buy it.

Forecasts predict that in a warming sea, the population of the Peruvian anchoveta may shrink. Catches of six million tonnes a year are unsustainable, he stresses, and now is the time to start using this resource in a more efficient, equitable way. According to the study, redirecting anchoveta catches for human consumption could generate 40,000 new jobs, US $351-million in additional revenue for the government, and 40 kilograms of fish for every Peruvian—fish that is rich in protein, fatty acids, iron, calcium, and vitamins A and C.

These are the exact nutrients that the Sacred Valley Heath volunteers are handing out on market day in Huillac, in the form of chalky multivitamins shipped in from abroad. Better use of the anchoveta could make all of this unnecessary. Someday, the Huillac soccer field could just be used for a game.

*Correction: Tim Cashion’s affiliation was updated to note that he is with the Sea Around Us at the University of British Columbia (UBC). Originally, the story just said Cashion was affiliated with UBC.