A composite satellite view of the Mississippi River Delta, a sprawling network of channels and marshland that stretches out into the Gulf of Mexico. Photo by Corbis

Over the past 7,000 years, the muddy waters of the Mississippi River built a massive delta complex containing more than 12,000 square kilometers of shallow channels and coastal marshes that fan out into the Gulf of Mexico like moss-colored lace. But Louisiana is losing ground at a staggering rate—as much as a football field per hour. And that rate, says coastal oceanographer Robert Twilley, is accelerating.

Twilley is a scientist at Louisiana State University and the director of Louisiana Sea Grant, and he says it’s time to use the river to save what’s left of the state’s coastal wetlands. At a scientific meeting in New Orleans last month, Twilley proposed deliberately flooding the vast plain of the Mississippi River Delta and letting nature lend a hand in protecting, and perhaps rebuilding, the coastline.

Since the first aerial photos were taken in 1932, Louisiana has lost roughly 5,000 square kilometers of coastal real estate, and not just to sea level rise. “It’s actually what I would call drowning,” Twilley says. Compacting sediments, oil and gas extraction, and canal dredging, among other factors, are causing Louisiana’s coastline to sink into the sea. 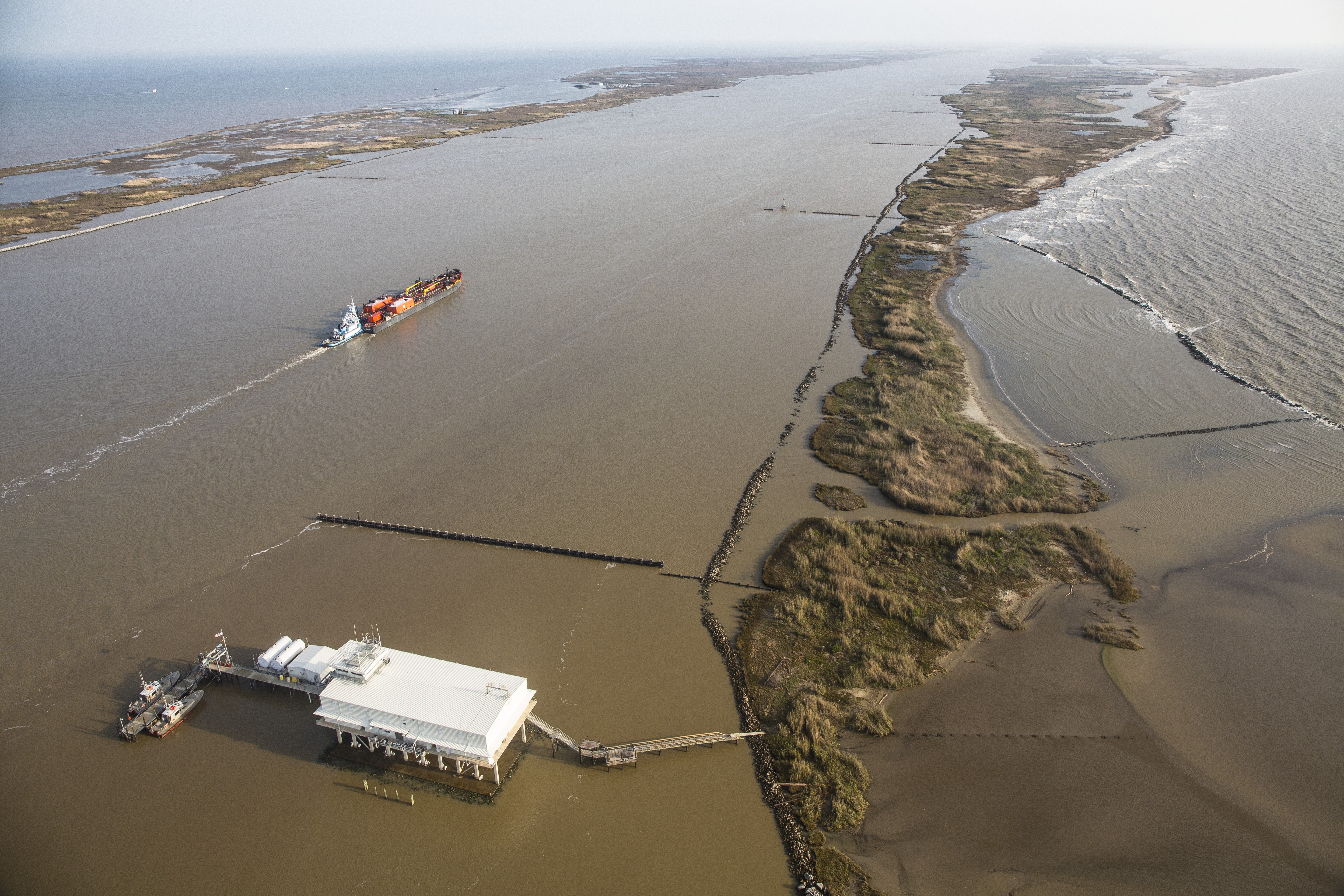 Sea level rise and land subsidence have combined to accelerate the pace of land loss on the Mississippi River. This once easily navigable entrance to the Mississippi has now shrunk down to a narrow passage. Photo by George Steinmetz/Corbis

To make matters worse, human activities have robbed the delta of its only means of defending itself. Upstream dams have reduced the amount of sediment in the lower Mississippi by 70 percent, and levees have kept what remains from spreading across the coastal floodplain. Most sediment now flows out the mouth of the Mississippi, bypassing the delta.

As a result, Louisiana stands to lose its vast coastal wetlands and the tremendous economic and ecological benefits they provide. They host one of the world’s largest fisheries, protect inland areas from devastating storm surges, and improve the water quality of the gulf by absorbing nutrients from agricultural runoff and other pollutants.

But Twilley thinks there’s a way to slow the rate of coastal land loss. After studying two of the Mississippi River’s smaller distributaries, Twilley says that restoring the delta’s sediment supply with controlled floods could be the key.

As it approaches the coast, the Mississippi splits into a number of smaller channels that feed different parts of the deltaic plain, like the Atchafalaya and the Terrebonne Basins. These two basins share many similarities: they’re about the same size and age, and they have similar geological features. But human intervention over the past century has caused these basins to evolve in dramatically different ways. 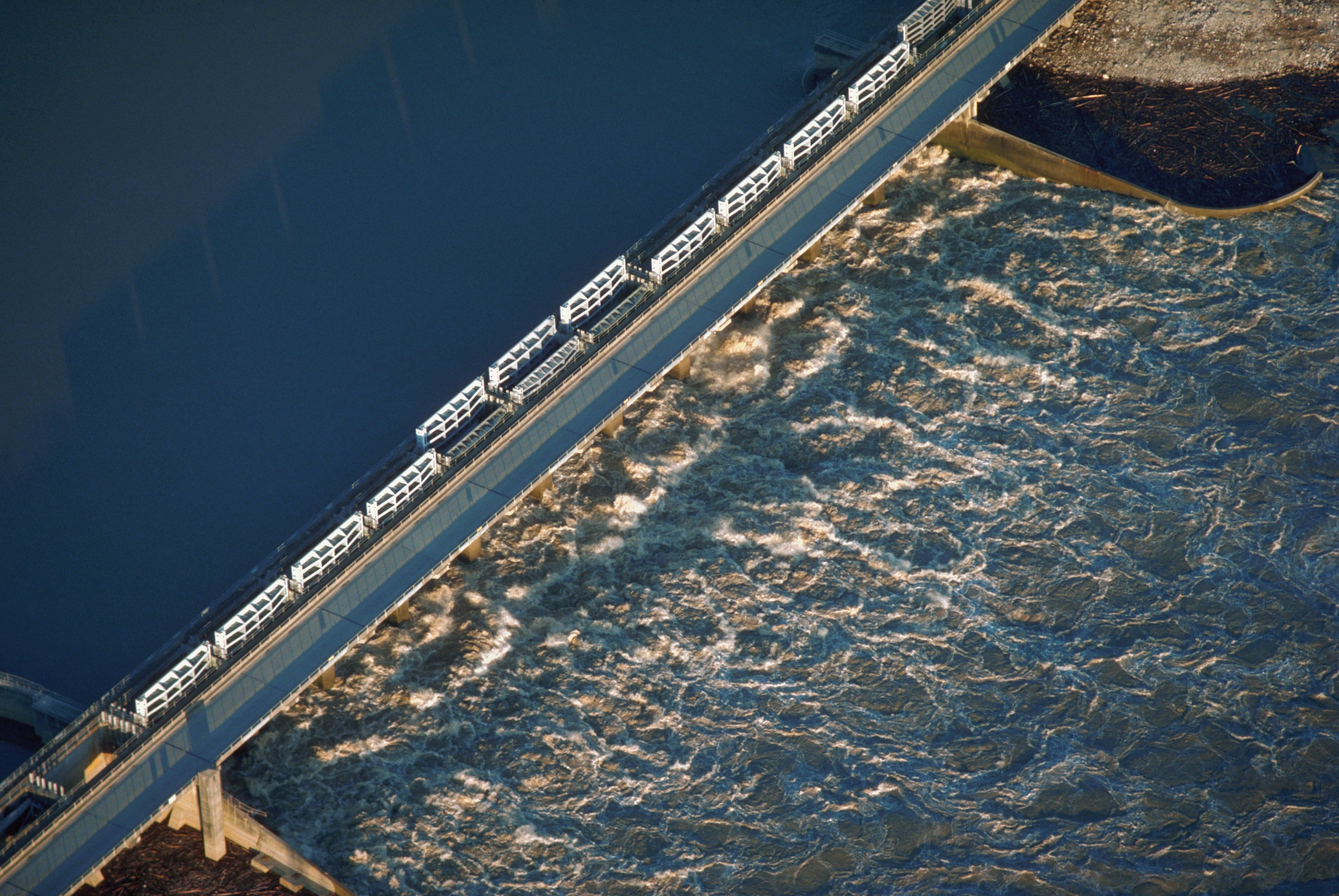 The Old River Control Structure constrains the flow of the Mississippi River into the Atchafalaya. Photo by Philip Gould/Corbis

In 1963, the Army Corps of Engineers built the Old River Control Structure, a set of dams designed to control the flow of water out of the Mississippi River and into the Atchafalaya. The purpose was to prevent the Mississippi from changing course and stranding New Orleans but a consequence has been that the Atchafalaya continues to receive a healthy supply of water and sediment, sometimes delivered in intense floods. The Terrebonne Basin, in contrast, lost its sediment supply when a dam went up in 1904.

By comparing early aerial photographs with modern satellite imagery, Twilley and his colleagues assessed how these two basins have changed since 1932. Their analysis showed that the Atchafalaya Basin has lost almost no land, while the coastline in the Terrebonne Basin has migrated inland at a rate of 200 meters per year. Twilley thinks the results in the Atchafalaya could be replicated in other coastal basins in a bid to save more of Louisiana’s coastline.

Doing so would require building diversion structures that let water and sediment escape through the Mississippi’s levees into surrounding wetlands. There are already several small diversion structures on the river and the state’s Coastal Master Plan calls for two additional midsized structures to go up in the next decade or so. But early modeling efforts suggest that supplying enough sediment to stave off land loss using these new diversions would require prolonged injections of fresh water into brackish coastal wetlands, which could harm the region’s lucrative fisheries, Twilley says.

An alternative, he suggests, is to build larger structures that would allow managers to flood the land around the Mississippi with short, intense pulses of water and sediment, mimicking what has happened in the Atchafalaya Basin. His calculations show that opening these floodgates whenever the Mississippi’s flow surpasses a certain threshold (22,650 cubic meters per second) would be enough to boost the delta’s sediment supply while minimizing the effects on fish and other coastal species. He says this approach would allow the natural rhythm of the river to dictate the timing and duration of floods.

Satellite imagery shows the evolution of the Atchafalaya delta from 1984 to 2014. Photos by NASA/Earth Observatory.

Controlled floods have been used for safety and environmental restoration in many places, including on the Colorado River, but few have been implemented for the express purpose of rebuilding a delta, says Martijn van Staveren, a PhD candidate at Wageningen University in the Netherlands who studies the subject. While scientists are still studying how such floods might work, Van Staveren says the idea has begun to gain traction.

“The river built the coast; the river is required to sustain it,” says Virginia Burkett, a scientist at the US Geological Survey who has spent much of her career working on Louisiana’s coastal wetlands. Although she hasn’t seen Twilley’s new work, which is currently in review, she says controlled floods would be a return to normal. “That’s the way the river operates naturally,” Burkett says.

However, some scientists think such efforts may be too little too late, and that researchers and managers need to start planning for a future with far fewer wetlands. “Right now they are all focused on maintenance, some are even on growth, but that’s crazy,” says James Syvitski, a delta expert at the University of Colorado. “This delta is getting destroyed now, today,” he says.

But that doesn’t mean diversions aren’t worth a try, says Michael Reuter, director of the North American Water Program at the nonprofit Nature Conservancy. “We probably don’t have enough sediment in the system today to maintain the delta that we have,” Reuter says, “so we have to use every bit that we have to maintain what we can.”