It can take special effort, even strutting and shouting, for humans to get attention and assert themselves in a populous urban setting. Turns out the same applies to Pacific wrens in the dense coastal temperate rainforests of British Columbia. In the prime habitat along insect-rich salmon streams, male wrens must work extra hard to defend their territory and attract a mate. “They sing at each other,” explains Kirsten Wilcox, a master’s candidate at Simon Fraser University in Burnaby, British Columbia. “They go to the edge of their territories and kind of belch out at each other.”

Salmon spawning streams have long been known to benefit the wider ecosystem. Bears and wolves will come to feed, and even the trees get a boost as rotting salmon carcasses fertilize the landscape. These carcasses attract insects, too, which in turn lure large numbers of insect-eating Pacific wrens.

But Wilcox was interested in how dense salmon streams affect the interactions of the animals that live amid such abundance. She chose to study the tiny, brown Pacific wren because it lives beside these streams all year and occupies a relatively small territory that makes for easier studying. “[The bird is] like a camouflaged golf ball that flies through the forest,” Wilcox says with a laugh. “They’re hard to find until they start singing [their] long, beautiful song.”

Over two years, Wilcox and two field technicians studied the birds living along 13 boat-accessible streams in the traditional territory of the Heiltsuk First Nation on British Columbia’s central coast. Eleven of the streams were home to chum and pink salmon, while two were devoid of the fish. The study took place in the summer, before the fall salmon spawning runs, but the working hypothesis was that salmon nutrients make for an insect-rich habitat year round. 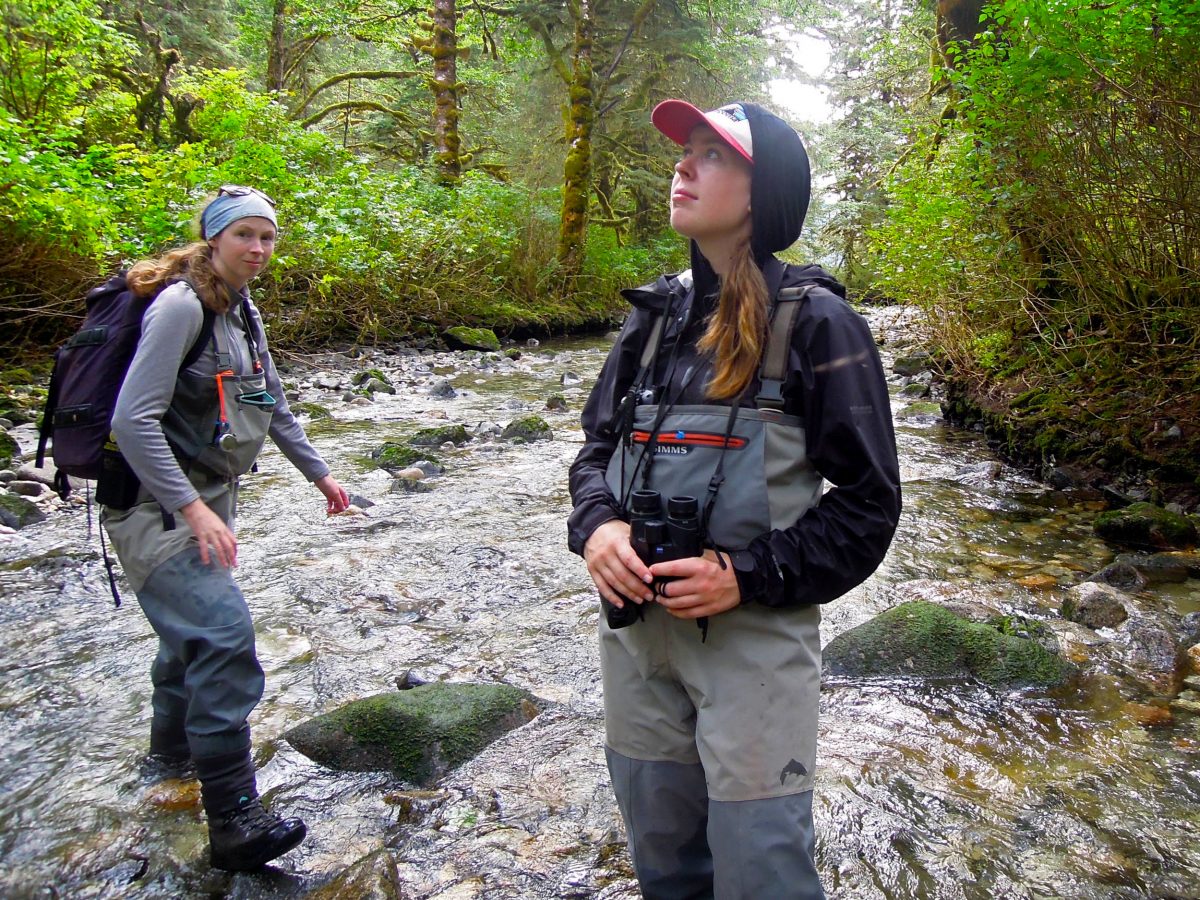 The research team, led by Kirsten Wilcox, chose to study Pacific wrens because the birds stick to their streamside homes year round rather than migrating, making it easier to identify how differences in nutrient availability affect the birds’ interactions. Photo by Allison Dennert

The researchers used mist nets and recorded calls to attract, trap, weigh, and tag 50 adult male Pacific wrens. “We’d play their songs in their territory, and they’d get really aggressive and angry, and get caught in the net,” Wilcox says.

When the researchers compared the birds’ movements and behaviors, they discovered that salmon-bearing streams yielded denser populations of highly territorial male wrens than streams without salmon.

As we know, prime real estate in a dense neighborhood comes at a price. Male wrens occupying habitat along the salmon streams had to work much harder than those along salmon-free streams. Their calls were louder, and they had to sing more often to maintain their territory’s boundaries and attract females for mating. In these dense stream-fed metropolises, the fattest males prevailed—not through physical battles but through auditory posturing, which takes a lot of energy. “They counter-sing, taking turns singing back and forth at each other. ‘Look at me. I’m so much better than that other dude,’” Wilcox explains.

The next phase of Wilcox’s research is to determine how controlling a productive territory affects the degree to which a male Pacific wren will assist in raising the young. Males build the nests but do not incubate the eggs. Overall, male Pacific wrens have a spotty record of helping to feed chicks, given they can have multiple mates at the same time. “They’re kind of deadbeat dads,” Wilcox concludes. Perhaps having a home along a swanky salmon stream will affect their parenting skills, too.