People started frequenting the Rat Islands, in the western Aleutian Islands, roughly 6,000 years ago. There, the ancient Aleuts came up with a range of ingenious ways to exploit the abundance of birds with which they shared the islands. Photo by Maximilian Buzun/Alamy Stock Photo

No one lives on the Rat Islands anymore. Perched halfway between Alaska and Russia, dividing the Pacific from the Bering Sea, the western Aleutian Islands are a mythic landscape. Active volcanoes puff behind rolling tundra. Seals and sea otters romp in the coves. Birds are everywhere, their nesting colonies seasonally blanketing entire hillsides, their calls echoing louder than the waves.

Vibrant Aleut villages once dotted this coastline, says Caroline Funk, an anthropologist at the University at Buffalo in New York State. She has spent much of her career digging through Aleut sites for clues about what life was like on this remote archipelago up until around 250 years ago, prior to Russian contact. Now, in a new paper, Funk has compiled her research into the first comprehensive ethnography of one of the most vital relationships held by the Aleuts—the one they shared with birds.

In addition to scientifically chronicling the role of birds in Aleut culture, Funk says her efforts to understand the value of different birds to the Aleuts will prove useful to other researchers who are working to understand how bird populations in the Aleutian Islands have changed over time. Ecologists often use the prevalence of bird remains in Aleut archaeological sites to gauge historical abundances, but Funk says this representation is biased by cultural factors—some birds were just more useful to the Aleuts than others. And on the remote Rat Islands, where Funk has conducted most of her research, the Aleuts found the birds to be very useful.

Ever since the first humans began frequenting the Rat Islands around 6,000 years ago, arriving by boat, birds were a diverse and abundant resource. Even today, 86 bird species have been documented there, many in staggering numbers. Flocks of puffins, auklets, and gulls are so dense that if one were to dangle a net from atop a cliff—the way they were traditionally hunted—they’d capture dozens at a time. Birds were possibly even more abundant prior to the mid-1700s, when ships brought foxes (intentionally) and the islands’ namesake rats (accidentally) to the archipelago.

Funk describes how the Aleuts used many bird species for food, seasonally collecting eggs and hunting freshwater ducks. Cormorants, although less palatable than other birds, were available in winter, making them a welcomed source of food in a time of scarcity. Downy feathers made excellent kindling for fires. Sternums from ducks and red-faced cormorants were fashioned into spoons, tiny avian windpipes were sewn into the fabric of bags, and eagle wings became brooms. 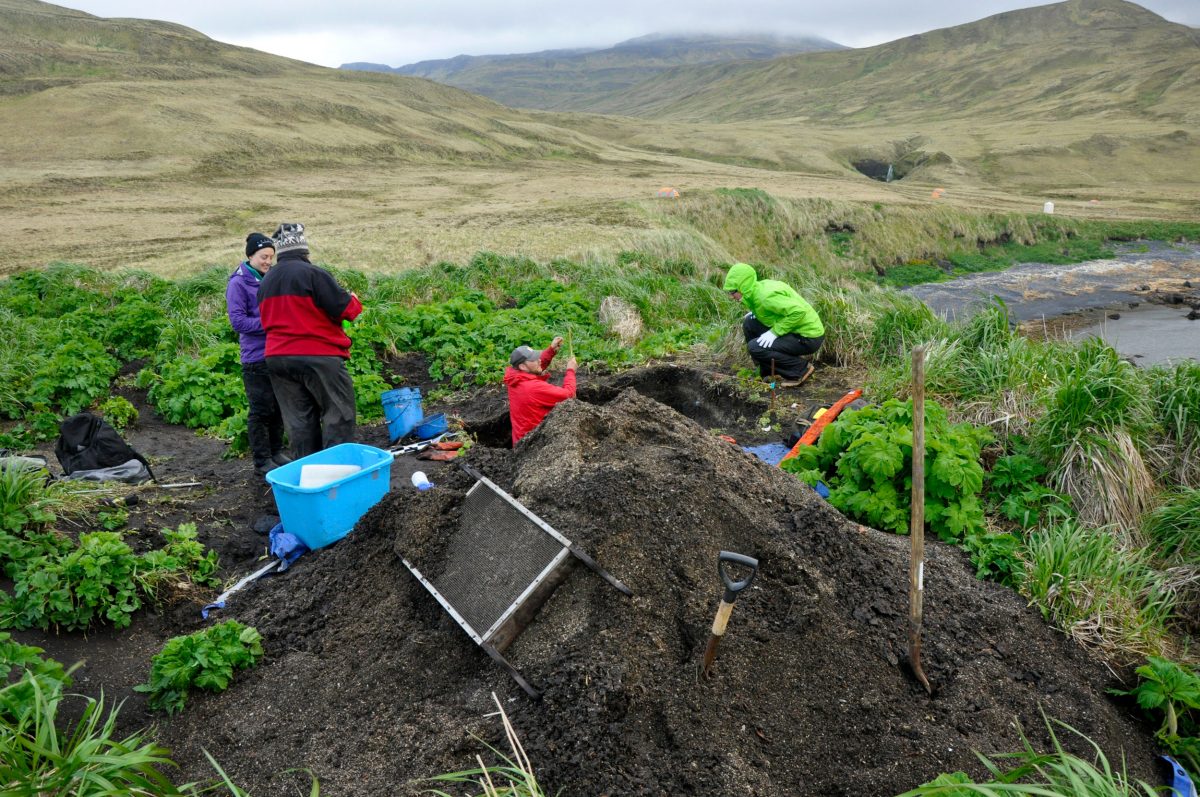 Archaeological excavations of Aleut sites show a huge number of bird remains. Some ecologists have used the prevalence of bird remains in these archaeological sites to estimate historical bird abundances, but as anthropologist Caroline Funk argues, the extent to which different bird species show up in the archaeological record depends to some extent on how useful those birds were to the Aleuts. Photo by Brian Hoffman

The Aleuts, both men and women, wore long, feathered shirts, usually made from puffin skins. Forty to 60 puffins, depending on the species, were required for each shirt, which lasted only a year or two. Aleut women processed the skins and then skillfully sewed the garments using bone needles and thread made from bird guts to make tight, waterproof seams. The shirts were reversible, worn with the feathers facing out for rain and facing in when the weather was cold and dry. The sheer number of puffins needed to keep a household clothed explains their abundance in the archaeological record, Funk says.

Birds were also symbolically and ritually significant to the Aleuts, Funk says. In the eastern Aleutians, children were buried with hawk skins and gray-crowned rosy finch wings. According to Aleut oral histories, humans could use downy feathers or skins to transform into hawks, bald eagles, whiskered auklets, northern fulmars, winter wrens, or song sparrows.

In Aleut stories, birds were sentient beings. Whiskered auklets were rumored to appear as women in order to seduce Aleut men. And Funk cites a story about a woman who married two murres. They got along well: the bird husbands were capable providers and cared for their wife. The only downside to the marriage was the way the murres smelled—the “birdy reek” ultimately drove the woman from an otherwise acceptable marriage.

This first study of the Aleut perspectives on birds in the western Aleutian Islands is incredibly valuable, says Erica Hill, an anthropologist at the University of Alaska Southeast. Though the archeological data set is small and much of the ethnohistoric observations are qualitative, by drawing from archaeology, ethnohistory, and modern bird surveys, Funk was able to capture prehistoric Aleut perspectives toward birds as completely as possible, Hill says.

Funk says that while she did her best to capture the range of the relationship between the Aleuts and the birds on which they relied, she acknowledges that culture is fluid and ever-changing, and some knowledge is likely forever lost to time. Yet her study offers both an anthropological tool and a glimpse into the past—a compelling sketch of a people exquisitely tuned to their surroundings and a relationship between humans and birds nurtured for thousands of years.