During a recent bioblitz, a collaboration between the Hakai Institute and the Smithsonian Institutions’s MarineGEO Network, more than 1,300 species of marine invertebrates were collected and cataloged, including this common shore crab. Photo by Chris Harley

In a makeshift lab on British Columbia’s central coast, a motley school of taxidermic fish hangs on the wall—a halibut, a wolf eel, a massive salmon the size of a baby harbor seal, and more, forever frozen in a very unscientific tableau. They’re relics of the fishing lodge that once occupied this spot, now home to the Hakai Institute’s* Calvert Island Ecological Observatory. Other than a quick glance when they first enter the room, the people working in the space that serves as the institute’s winter dining hall are largely unimpressed by the trophy display of the region’s vertebrates. Heads down, eyes to petri dishes and buckets, microscopes and camera lenses, for three weeks their primary focus has been the marine invertebrates and algae of the area. Fish can come in handy though. The room cracks up when someone asks, “Any copepods today?” Without missing a beat comes the reply: “No, but did you check any fish butts?”

From July 28 to August 11, Calvert Island was the site of an intensive effort to collect, identify, and document the nearshore marine life in the region—it was a bioblitz on steroids. At the end of it all, the team of expert taxonomists, crack biologists, and keeners willing to rise at 4:30 a.m. to catch the lowest tides had collected and identified about 1,300 marine invertebrate species, approximately one-third of the known marine invertebrate diversity in the northeast Pacific region. Teams also sampled for algae, fish, and meiofauna. It was an effort without precedent in the region. “This [project] was very big, not only in terms of British Columbia, but in terms of North America,” says Henry Choong, curator of invertebrate zoology at the Royal British Columbia Museum (RBCM). “We’ve seen these efforts in terms of tropical biodiversity, but not really here.” 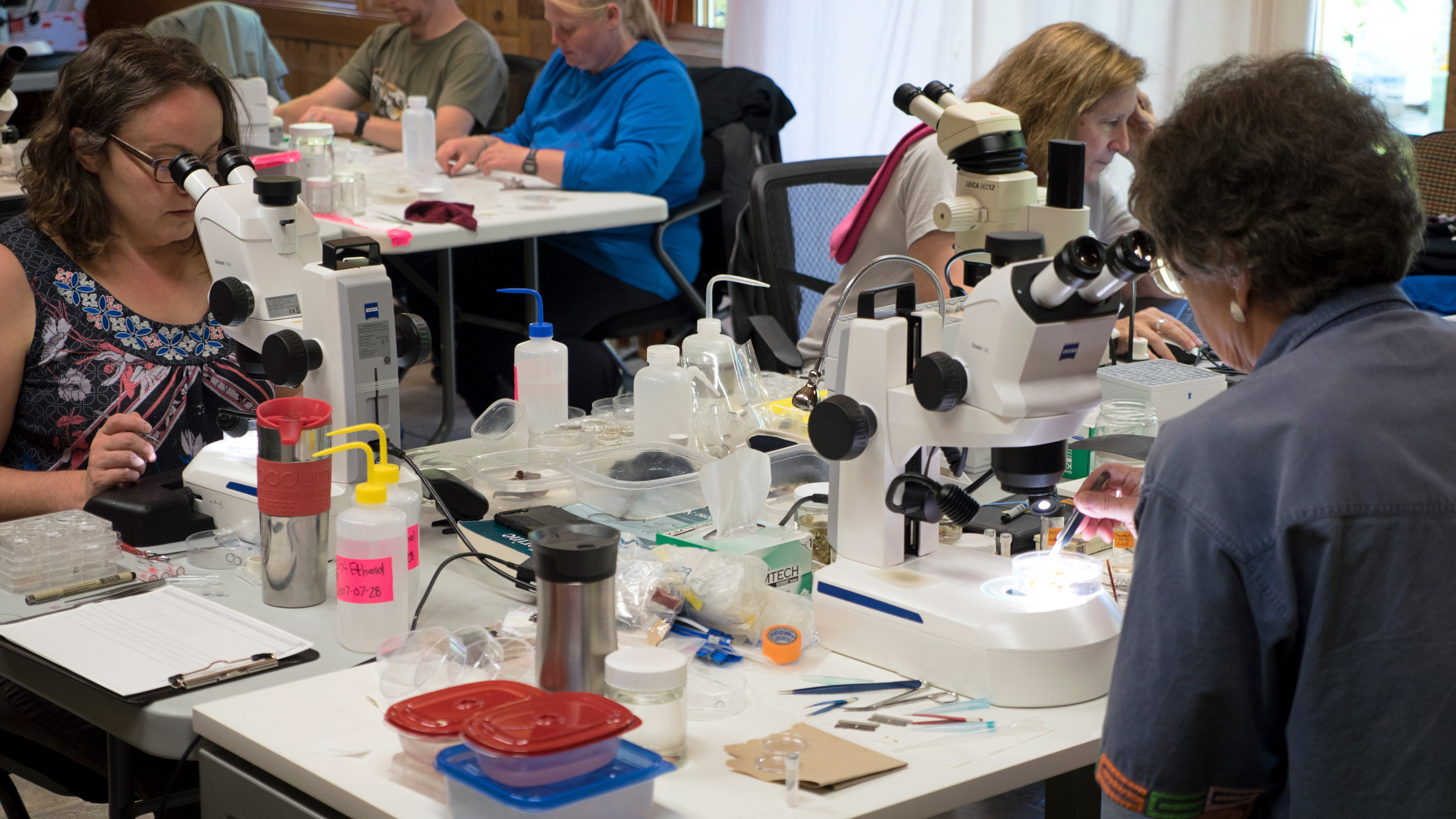 The bioblitz was a partnership between the Hakai Institute and the Smithsonian Institution’s Marine Global Earth Observatory (MarineGEO), a global network of marine observation stations of which the Hakai Institute is a member. “Our partners are working together to understand how coastal ecosystems work,” says Emmett Duffy, director of MarineGEO. “How is coastal marine life changing, why is it changing, and what are the consequences for people?”

To accomplish that, understanding biodiversity is key.

Getting a sense of a region’s marine biodiversity is often opportunistic—a coast guard vessel accommodates scientists and their research, or there’s funding for a one-off survey. Collecting is also driven by individuals’ interests and proximity to population centers or marine research labs, explains Philip Lambert, an echinoderm expert who for 35 years was the curator of marine invertebrates at the RBCM.

Lambert spent a lot of time during his tenure traveling the British Columbia coast with colleagues, making observations and species lists of marine invertebrates, and collecting specimens that were unusual or could extend a species’ known range. But biological surveys are expensive and time-consuming, so more accessible regions are often the best represented. In British Columbia that means Vancouver Island and the Strait of Georgia, as well as Haida Gwaii, which, although being remote, is biologically interesting so has long attracted scientific study. 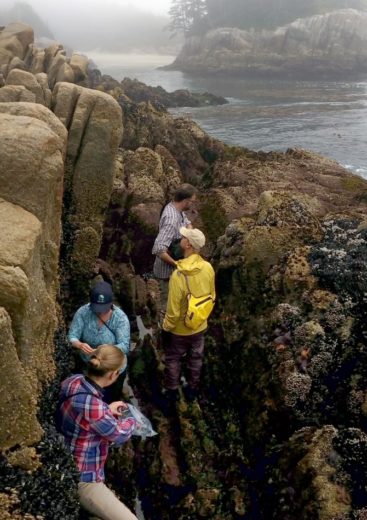 A team of biologists explores a mussel bed in the intertidal zone, one of the habitats surveyed during the bioblitz. Photo by Chris Neufeld

That leaves large swaths of the province’s 27,000-kilometer-long coastline largely uncataloged. “As with anything,” says Lambert, “if you don’t look for things, you don’t find them.”

The intensity of the bioblitz approach has distinct benefits.

“We know very little about life on this planet and [the northeast Pacific coast] is one of the least-explored parts,” says Gustav Paulay, a curator from the Florida Museum of Natural History who led the bioblitz team and has done similar projects around the world. “This is a very effective, efficient way to change that.”

The push at Calvert Island—225 unique collecting outings, in the rocky intertidal, kelp forests, mudflats, and other nearshore habitats—provides a baseline of information for future explorations.

In the bioblitz lab, Paulay orchestrates a very precise step-by-step process. Fluorescent pink duct tape delineates sequential workstations. The team first sorts, then identifies, then photographs the specimens. Next, each specimen is relaxed in a bath of clove oil, magnesium chloride, or other anesthetic that helps preserve the animal in the best state for future identification. (For example, a sea star with its arms extended rather than curled.) Tissue sampling, the final step before the sample is preserved, launches this bioblitz into a realm unimagined to biologists even just a few decades ago.

Each organism collected is preserved as a voucher specimen—the one tied to all the data, including species ID, and where it was collected and when. But a small piece of tissue will be sent for DNA sequencing for inclusion in the Barcode of Life Data Systems (BOLD). This repository stores the genetic information tied to a species, explains Dirk Steinke from the University of Guelph’s Centre for Biodiversity Genomics, and is a genetic library of life on Earth.

The bioblitz lab is often busy late into the night as the scientific team works to catalog and prepare specimens collected that day. Video by Josh Silberg

But while DNA sequencing is decidedly modern and high-tech, its value would be lost without the work of taxonomists. “We could build a huge library of sequences, but the one important key is the name attached to [the organism] by someone with taxonomic expertise making the judgement call,” says Steinke.

To that end, the bioblitz team gathered almost a dozen taxonomists from British Columbia, the United States, and also Russia and Japan with expertise in everything from seaweeds and hydrozoans, to amphipods and spionids, a particular family of marine worms. At Calvert Island, assisted by a team of ecologists and naturalists who spearheaded the collecting efforts, as well as science support staff from the Hakai Institute, the taxonomists worked long hours, mostly at the microscope, attaching names to the voucher specimens.

The biological blitzkrieg is over, but the work of slow science is just beginning. Back at their home labs, taxonomists will confirm species that need more detailed investigations, and describe those that are new.

“A lot of this fauna is undescribed,” says Paulay. And even things that are described can be wrong, with assessments having been made years ago by researchers more familiar with Atlantic species, for example, or before advanced technologies in microscopy. This means that what we think of as a described species might actually be an undescribed species with a Japanese or European name, says Paulay. “So that needs to be rectified.”

Taxonomic expertise has been critical to the success of the project, but it’s unlikely such a gathering of the minds will happen again. The effort has left a rigorous record—with a voucher sample, photograph, and, eventually, a DNA sequence—from all of the organisms collected. It’s a solid foundation that can be built on by future work in habitats not covered in this bioblitz.

Divers examine one of the 12 autonomous reef monitoring structures (ARMS) that have been in place for about eight months. The ARMS—apartment-like contraptions made of layers of PVC plates—are used to capture tiny marine creatures that live in nooks and crannies and are difficult to otherwise sample. Video by Grant Callegari

And the catalog of DNA sequences offers an exciting future possibility for a less invasive and less expensive way to identify the life in a region—by simply using a bucket of water, a scoop of sediment, or even the gut contents of a fish. These samples are full of environmental DNA—scales, skin, molts, and other sloughed-off animal bits—which can be sequenced and compared against the DNA baseline compiled during the bioblitz, explains Matt Whalen, a postdoctoral fellow for both the Hakai Institute and MarineGEO.

Whalen is tasked with reporting the final results of the bioblitz, which includes sharing the collection on open-access databases. The project will likely take a few years to wrap up, but a photographic species ID guide and an updated species checklist for the region are projects for the near future. He’s excited to see how the final tally will add to the state of knowledge of species diversity and range. “There’s been real discovery here,” he says. And the possibilities of what can be done with the information seem endless. “We can answer some big questions, like what happens to biodiversity when a predator such as a sea otter comes to town?” he says.

Ultimately, whether to answer big questions or smaller ones, the project’s legacy is information. It’s important for future generations to know what a region looked like before it changed, Paulay says. “Just imagine what you would pay to go back to the age of the dinosaurs and see T. rex? We have the opportunity to look at all those T. rexes out there and to describe them. This is a job for our generation.”