Parts of Haida Gwaii, an archipelago off British Columbia’s north coast, remained ice free throughout the last ice age. Archaeological investigations of just a few of the islands’ many caves have revealed a trove of surprising finds. Photo by Kenneth Lawrence/Shutterstock

When Quentin Mackie first crawled into a limestone cave on the west coast of Haida Gwaii, an archipelago off British Columbia’s north coast, he wasn’t expecting to enjoy the experience. The cave was cold, cramped, and damp, yet Mackie, an archaeologist with the University of Victoria in British Columbia, found the long days excavating underground quite pleasant: “The heightened sensory experience” in the passages was amazing. One time, he says, while taking a break in a pitch-black cave on Moresby Island, Tim Heaton, a paleontologist from the University of South Dakota, opened a juice box 10 meters away, filling the tunnel with the overwhelming odor of grapefruit.

But the joys of digging in a dark cave paled in comparison to the thrill from what was lying hidden underfoot: a stone spearpoint—evidence that early people had been in or near this very cave thousands of years ago.

“We had no expectation that we would find artifacts in those caves,” Mackie says. The goal for him and his team, a mix of archaeologists and volunteers, was to recover animal remains to help reconstruct the ancient environment. Haida Gwaii features a limestone terrain, which the groundwater has eroded into a network of karst caves that are cool, dark, slightly alkaline, and difficult to access: the perfect conditions for preserving animal remains and artifacts.

Nearly two decades ago, Heaton found that first stone spearpoint, in a Moresby Island cave called K1. Since then, the team has excavated two other caves—Gaadu Din 1 and Gaadu Din 2—on Haida Gwaii’s Huxley Island, one of the smaller islands in the archipelago. The digs, conducted in collaboration with Parks Canada and the Haida Nation, have recovered other tools and animal remains—including the oldest reported evidence of domesticated dogs in the Americas. The findings were recently published, providing insight into life on Haida Gwaii more than 10,000 years ago and a tantalizing glimpse of what might be found in its many other caves.

“All three of [the caves] had archaeological evidence, so my guess is that there are hundreds of comparable caves on the coast,” says Mackie. The public is prohibited from entering caves on Haida Gwaii. Research is only conducted by permitted archaeologists. 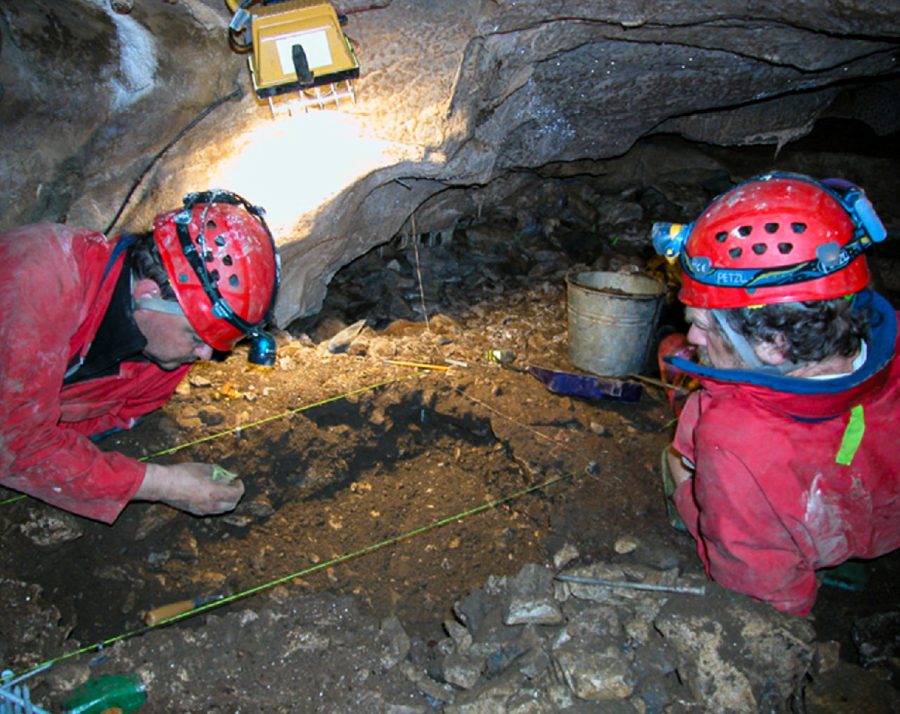 Nearly two decades of work by the team including Al Mackie (left) and Daryl Fedje (right) went into excavating and analyzing the archaeological artifacts found in caves on Haida Gwaii, an archipelago off British Columbia’s north coast. Photo by Fedje et al.

Caves are magnets for animals and people, explains Daryl Fedje, an archaeologist at the Hakai Institute* in British Columbia and lead author of the study. But unlike in other parts of the world, where caves have yielded many archaeological insights, cave excavations aren’t common in British Columbia. Archaeologists in the province are typically hired to assess proposed development or logging sites, not to explore caves—though they do also conduct research excavations at known villages and intertidal sites.

Several field seasons spent excavating at the three caves on Haida Gwaii—which are all protected under the Canada National Parks Act and Haida law—revealed a range of uses. K1 and Gaadu Din 1 were likely bear dens used up to 13,400 years ago. There, the team found weapons, including spearpoints and stone flake tools that are more than 11,000 years old. Fedje says these artifacts were probably brought in by impaled animals or by hunters butchering their catch. Meanwhile, hunters likely used Gaadu Din 2 as a temporary camp between 12,500 and 10,700 years ago. Fedje notes that the team found a hearth, stone tools, and resharpening flakes in this cave.

Among the animal bones collected from the caves are the remains of brown bears and deer. Both species appear to have been extirpated from the archipelago by the end of the Pleistocene, around 11,700 years ago—though deer were later reintroduced. While brown bears are common on the British Columbia mainland, this is the first evidence they were ever on Haida Gwaii, Fedje says. This work has “developed into an incredible story that tells a huge amount about the history of the environment and people.”

By far the most striking of the animal remains, though, was a tooth. Using DNA analysis and radiocarbon dating, the team determined it came from a domestic dog that lived 13,100 years ago—the oldest evidence of domestic dogs ever reported in the Americas. What’s more, dogs are “a proxy for the presence of humans,” Mackie says. This find extends the length of human occupation of Haida Gwaii as recorded by archaeological evidence by 2,000 years—though Fedje expects more searching will reveal artifacts that push this back even further. 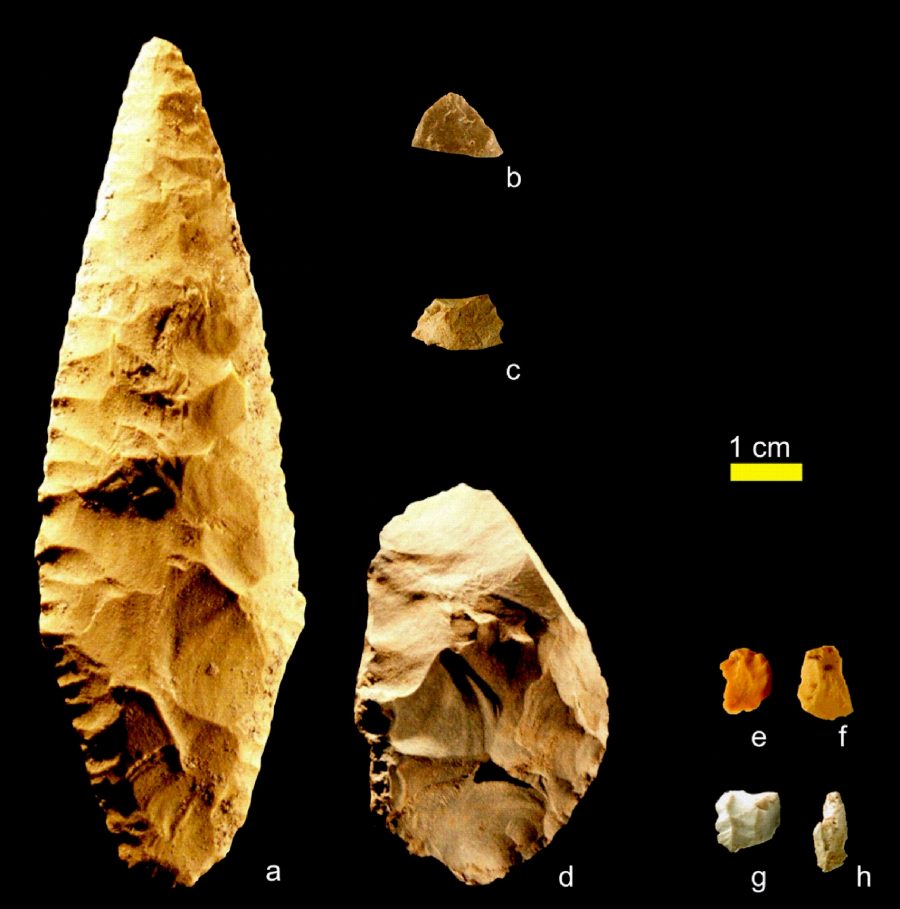 Among the myriad other artifacts, archaeologists found stone tools dating to roughly 11,000 years ago. Photo by Fedje et al.

Loren Davis, an archaeologist at Oregon State University who was not involved in the study, says these findings are exciting. The dog tooth, in particular, “was a massive discovery.” Haida Gwaii and coastal British Columbia lie at the doorstep to the Americas, he says, so learning more about the early cultural and environmental record of the region has significant implications for understanding what life was like for the earliest inhabitants.

Skil Hiilans Allan Davidson, a Haida hereditary chief and archaeologist who took part in the excavations at all three caves, emphasizes that artifacts and animal remains are more than just ancient discoveries. Whether it’s a bear mandible or a fossilized human footprint, archaeological and paleontological findings have meaning for Indigenous people. Haida people have lived on and cared for Haida Gwaii for thousands of years, Davidson explains. His nation’s oral histories recount Haida people’s deep history in this region, and Western archaeology is just now starting to catch up.

Q̓íx̌itasu Elroy White, a Heiltsuk archaeologist and owner of Central Coast Archaeology, who was not involved in the study, was pleased to see that the authors included oral histories in their published work, but wished they’d highlighted the importance of the stories by prioritizing them higher up in the paper. He would also like to see non-Indigenous archaeologists translate their findings into relevant Indigenous languages when they’ve conducted research in First Nations communities.

Mackie agrees that understanding Indigenous histories and a deeper cultural context makes for better archaeology. “Through the trowel is not the only way to know about deep human history,” he says.